“Oh this is easy”, I thought, adding a few more moments to the endless mistake I began several decades back, “it’s kind of telling me everything I need to do anyway.”

Creaks is a platform-based puzzle game. I thought I was not particularly good at puzzle games. I am in fact hopeless at them. I am a fool, a dunce, an entire bowl. It has stumped me in a time so short I am ashamed to divulge it.

I shouldn’t admit that I don’t have the vocabulary to describe exactly how I can tell that Creaks is made by Amanita Design just by looking at it. Like sad-cute robot adventure Machinarium, it has a worn look, with a somewhat muted palette, but is drawn with such clarity that it looks pretty anyway. It has some of Chuchel‘s madcap energy as, though not fast paced, it’s animated with an infectious liveliness. It’s fitting then, that quite a few of its puzzles are about turning monsters back and forth into furniture.

You play as an unnamed feller who’s minding his own business with a book, but distracts his way into a secret passage to an underground labyrinth. A linear course of levels await, which you navigate using your legs, and loads of ladders that criss cross the floors. Even early on, the levels are densely packed, and you won’t get a path directly from left to right when you could go up and right and then down and up twice and then down again. It might sound like a chore, but it hasn’t been in the opening hour, and in fact makes the setting much more interesting. 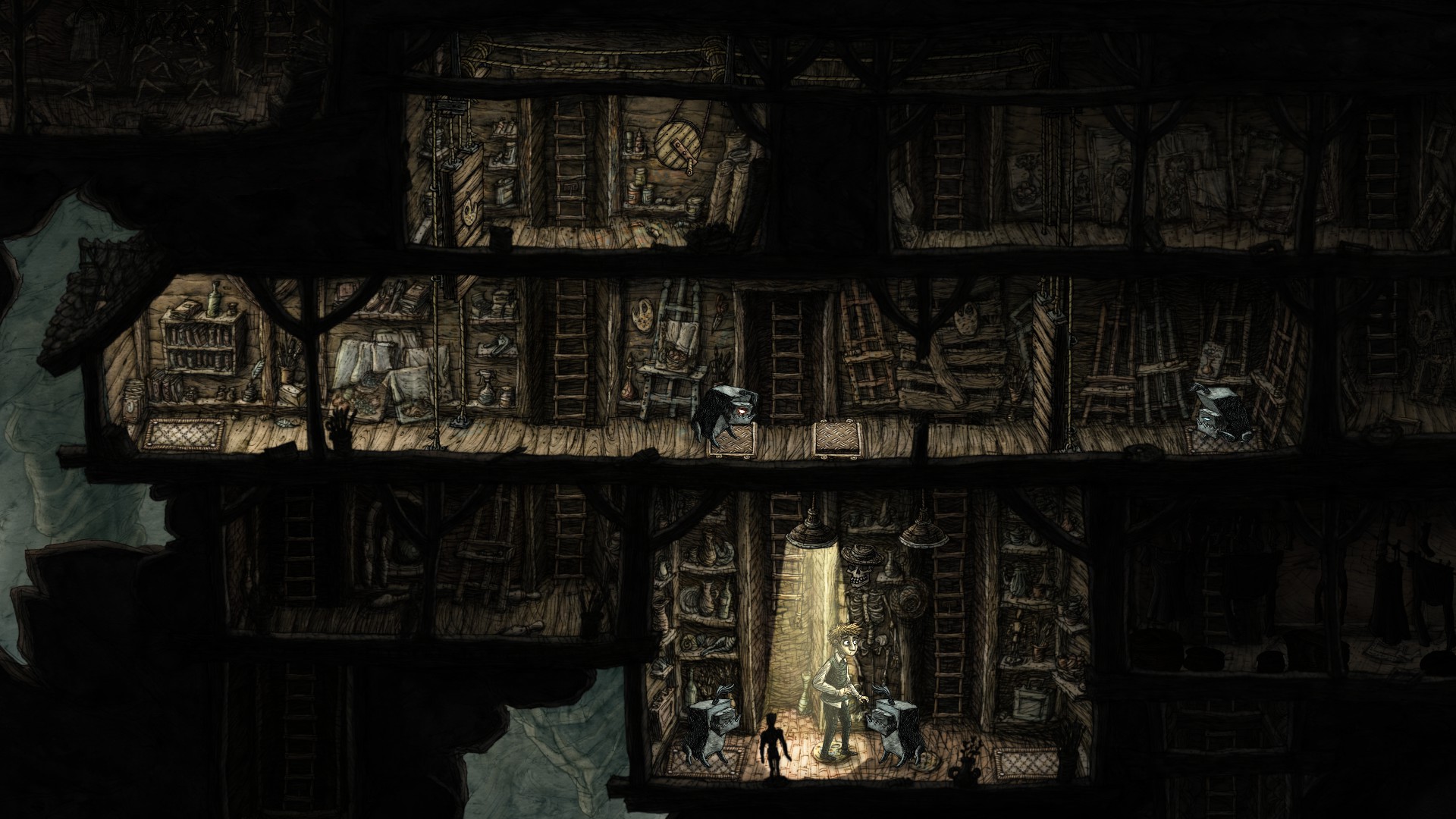 I don’t want to talk about it.

It’s all apparently one huge building, creaking and crumbling as you cross it, and rumbling now and then under the distant movements of some giant creature. It’s also full of robotic dogs that turn into furniture when exposed to light, semi-passive jellyfish that scare the dogs, and sometimes a snuffling birdman in a dressing gown. I’ve no idea what’s going on, but it doesn’t beat you over the head with a narrative. It’s more about enjoying the atmosphere, the lovely music and sounds, and the puzzles.

I am not good at the puzzles.

It’s honestly embarrassing. They’re not even hard really. Your goal is to simply get past the monsters and keep moving, and it’s often easy. Dogs will bark (and they are excellent barks) and give chase if you get too close, which is how you manipulate them into stepping on the pressure pad while you climb up a ladder out of their reach. That switches on a light that turns the other dog into a cabinet you can push onto a second pad, which lowers the drawbridge, which lets you drop down behind the first dog to distract it again, then double back to the now-clear exit.

It’s that kind of spatial puzzle, with a little bit of good timing needed once the jellyfish show up. But it completely stumped me early on, when I could simply see no way out of a screen that didn’t get me chomped. It turns out that I’d made an assumption instead of testing whether or not a dog would get bored and walk off after a while. My fault. I am a fool. 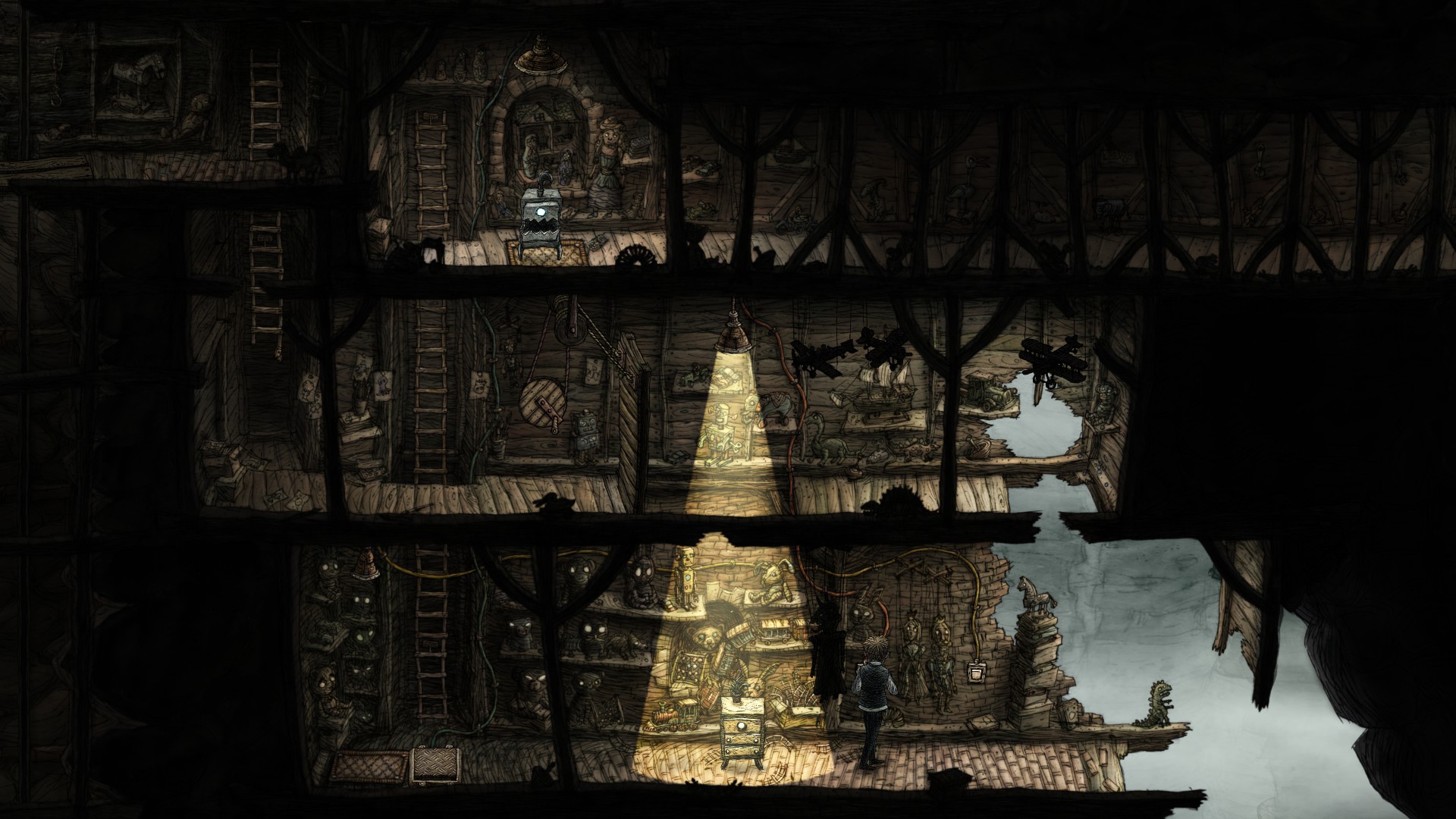 “If only you could store things in the monsters” – Amanita, I guess

Puzzle games are not my forte, but I enjoyed my time with Creaks. It’s not pushing the boat out but it has character, and its strange little world has me curious even though I get the impression it’s largely magical and strange for its own sake. There’s one bit where you move from a ramshackle wooden area to a tiled one with a colder, more metallic look. For some reason I really appreciate that this happened over one level, rather than making the transition between screens. It makes it all seem a bit more like an actual place rather than a game. I think it’s that kind of detail that makes it work. Of course it’s a game. It’s a very artificial puzzle setup. But it plays like a nice little journey instead. Even if it’s one that mostly taught me I am an oaf who should have just sat there and read my book.