Escharum has set a fire in my heart. There were plenty of titbits to be gleaned from last night’s Halo Infinite campaign footage, but the star of the show for me was the incredibly aggravated gorilla who came out of nowhere to deliver a passionate monologue to camera, right at the end. Admittedly, this sounds exactly like something I would invent in a joke post about a fictional Halo demo. But it was quite real, and having slept on it, I’m all the more delighted by it.

But it’s not just this hulking beast that Big John Halo might be facing in Infinite. Having attended a developer presentation about the game last night, I can report that Halo Infinite might also feature the Flood as an adversary. It’s a big “might”, admittedly, as when I asked narrative lead Paul Crocker whether our old parasitic mates would be making a reappearance, he kept his cards so close to his chest I’m surprised he didn’t cough up the ace of diamonds. “What I can guarantee,” he answered, “is that you’re going to make new mates”. Not much to go with, alas, but going by the smile he was trying to suppress as he said it, I’m giving it 60/40 odds in favour of everyone’s favourite disaster squidfolks making a return. But all in all, Crocker was more interested in talking about Escharum, which is fine because I am, too.

Revealing new characters for big budget action games can be challenging when you’ve only got a few lines of dialogue to make an impression in a relatively short gameplay reveal, especially when you’re revealing a new major antagonist in a blockbuster FPS franchise like Halo. By and large, the baddie for Halo Infinite needed to be an imposing, violent alien with a personal vendetta against Big John Halo, or at the very least humans in general, as anything else would have upset the proverbial applecart. When you’re as massive and successful as Halo, there are certain things fans expect.

And so in Escharum we got an imposing, violent alien with a personal vendetta against Big John Halo. He could have been the dullest, most generic War Bastard going – arguably, much like Tartarus from Halo 2. But he was not. Escharum was weird, strangely likeable, and genuinely compelling, and all I want is to endure more monologues from him and find out his general deal.

I was thinking about what he said in the trailer again this morning (hell, our former colleague Adam Smith (RPS in peace) has even set it as his phone’s alarm tone), and found he kept occupying the spaces in my head where I normally get distracted by aquarium plants and my crab tanks. Sure, part of the reason for this is that Escharum’s voiced by Darin “Reinhardt” De Paul, who is one of the best voice actors out there for OTT, bombastic charisma. But also because the script he was working with had worked in a host of tiny details to elevate the world’s most intense gorilla above the generic.

For a start, there’s the fact that he seems to… like you? There’s no doubt that Escharum wants to murder the shit out of you, but the whole of his short monologue is underlaid with a sort of incredibly aggressive affection. Not the false bonhomie of a supervillain “welcoming” the hero to their lair with an evil laugh, but the excitement of someone meeting their hero who they also hate with every fibre of their being.

It’s a complicated, dissonant mindset. Convincingly alien, in a way. But there’s no doubt about it: as Escharum implores Chief to “bare his fangs”, in a line delivered with chilling intensity by De Paul, it feels every bit like motivation, rather than intimidation. This guy wants you to give him the very best you’ve got, and enjoy the battle to the death every bit as much as he intends to. 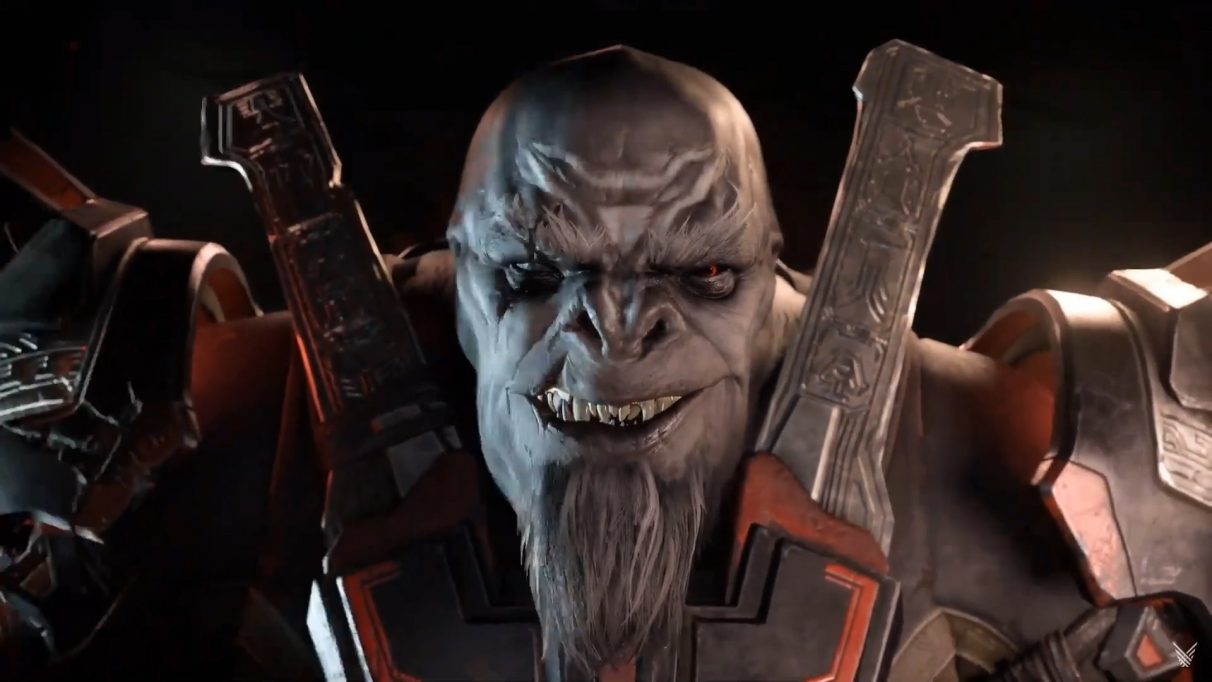 “but here you now stand…”

The second thing I love about Escharum’s monologue is the suggestion that underneath all of this berserk fixation on fighting you, he’s incredibly depressed. Apparently, Infinite’s story starts some months after humanity’s defeat at the hands of Escharum’s Banished faction, and it seems that you’ve stumbled upon him in a moment of post-anticlimactic soul-searching. He’s old, by the looks of things, and feeling like he’s at the end of his career as a big alien battle gorilla. Before his final challenge, he looks off to the side for a bit and admits that when the fight was done, he felt “weary, lost… alone.” It’s Alexander the Great having a cry because there’s nothing left to conquer, by way of London Zoo. You actually feel a bit sorry for Escharum. And clearly, he never imagined in his wildest dreams that only the most accomplished fight man in the galaxy would proceed to show up right on his doorstep, looking for a scrap.

So, when he turns to face you after his moment of reflection, and inexplicably steps out of the hologram he’s been speaking from to get right in your face, the look of motion-captured joy on his face is as thoroughly pure as it is terrifyingly bloodthirsty.

In deciding to kill him, you’ve just given this knackered old bruiser a reason to live. “This is my last fight,” he confesses, before going on to shout with what feels like genuine relief, that “our story will outlive us both”. All these less beastmode emotions are buried under macho hollering, but they’re unmistakable.

Escharum has clearly been consumed for some time with the fear of dying as a footnote in history. But now, whether he wins the fight or you do, you’ve saved him from irrelevance. In fact, he probably assumes that the Chief feels the same way, so much so that “set a fire in your heart, Spartan!” comes out more rapturous more than it does threatening. It’s hard not to find him likeable in that moment, and given the outlandishly close distance from which that whole final section is filmed, it utterly nails you to your chair. We’re used to writers trying to make us care about their protagonists, but trying to solicit pathos for a villain, especially one so unambiguously menacing as this, is a lot more impressive.

Is it silly to care this much about a speech from a ridiculous alien baddie in a Halo game? Nah, it’s not. This is space opera, remember, and it’s called that for a reason. Space opera stories are stories told in all caps, with emotions too big to fit into ordinary people or places, and wringing maximum passion from the ostensibly ridiculous is what it’s all about. Sure, the plot of the Halo games is complete spaghetti in places, and often doesn’t make sense. But then, it doesn’t make sense in regular opera when people sing at deafening volume instead of having normal conversations, does it? It’s a genre where you have to commit absolutely everything to the bit, without apology, or else produce something dull, forgettable and cheesy.

It’s not even like I’m really invested in the Halo lore. It’s fine, as lore goes, but it only really works for me when I’m tearing through the middle of it in a car named after a pig, while a load of monks sing my theme tune, and I’ve got scant mental space left to think about the details. I’d go so far as to argue that “high pulp” like Halo (a phrase I use very much as praise) is less concerned with generating a coherent, tidy plot than it is with generating a sense of mood.

And when it comes to moods, an eight-foot-tall, chronically insecure gorilla having a gigantic mental breakdown three inches from your face is about as big as they come. Flood or no Flood, sprint or no sprint, local co-op play or not, I’m sold.