I once worked in an archive that included a heap of medieval herbals. In some form or another, they were a huge part of our culture and inherited knowledge for thousands of years, and while Skyrim does have a few compendium and guide books, there’s nothing in them that really fits that bill.

But one talented player has recently taken to drawing and painting their own compendium of grumpy Nordland’s flora. Even in its earliest days, it’s got me excited and tempted to dive back into the alchemy game all over again.

Reddit user LadyLlama007 was quite simply inspired. In her own words: “Skyrim giving me inspiration to draw through my depression. I’ve recently started the game, picking flowers brings me immense happiness”. I can absolutely relate. I might have tried being a bandit, but almost all my Skyrim playtime is spent wandering in search of plants and mushrooms to expand my repertoire of potions and remedies. It can be very comforting. So let’s start with the big one: nirnroot. 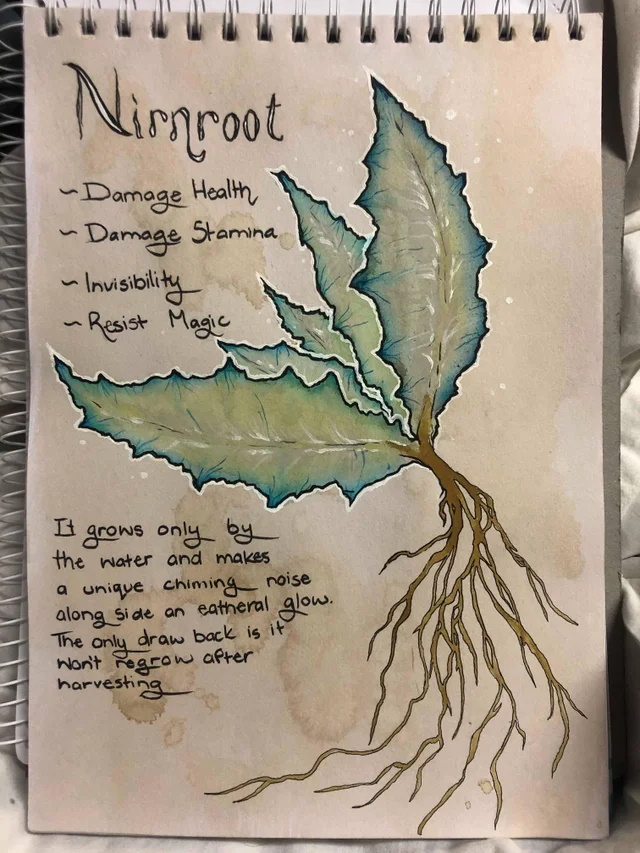 If you’ve played a bit of Skyrim or Oblivion, you know about nirnroot. It’s a wild plant that gives off a unique glow and shimmering sound effect, tied to a big collecting side quest in Oblivion. It doesn’t grow back when harvested in Oblivion, but it does in Skyrim, and is relegated to a regular alchemy ingredient. But culturally it retains its status, and I have to admit, I love that. People like it because it’s exciting to find it, even though it doesn’t really do much in game terms. So of course it was quickly requested, and our host absolutely caned it with this page.

I love the contrasts in this. The blending of the greens in the leaves, darkening suddenly to those black outlines, and then the white borders to hint at its glow, without going overboard. The roots are also excellent. They look so vulnerable. I can imagine repotting this. The aged paper is neat too. There is also a fun, handpainted meme version of nirnroot. 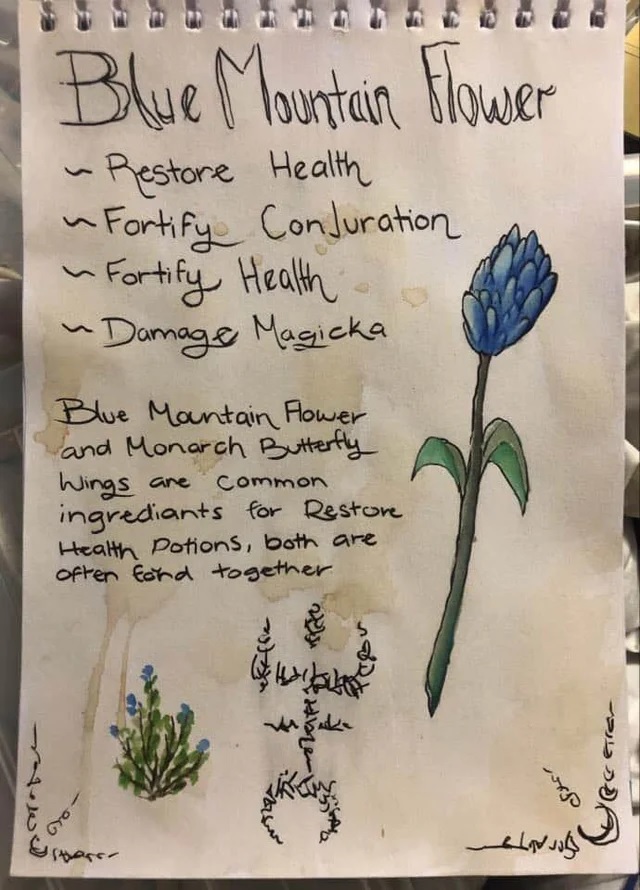 I must admit, I’d never paid close attention to their models before.

At the opposite end of the alchemist’s compendium is the humble blue mountain flower. It’s unremarkable enough that there’s little to add from this image, which captures it well. It gets across the plant’s rather feeble look, particularly the stubby leaves, but what it really nails is the supporting image of how you’ll see mountain flowers in the wild: as a wispy, somewhat insubstantial little shrub.

We get a new feature too, in the extra decorations around the edge and towards the bottom. Historically, herbalists and other scientists were typically artists too, and wouldn’t hesitate to fill up unused space with flourishes like this purely for its own sake. Modern games gain much from a culture of exhaustive wikis, but this more personal approach is one I’d love to see more of. Stardew Valley fans started doing something similar, for example, out of necessity, because the official Stardew guide books went out of stock so often. 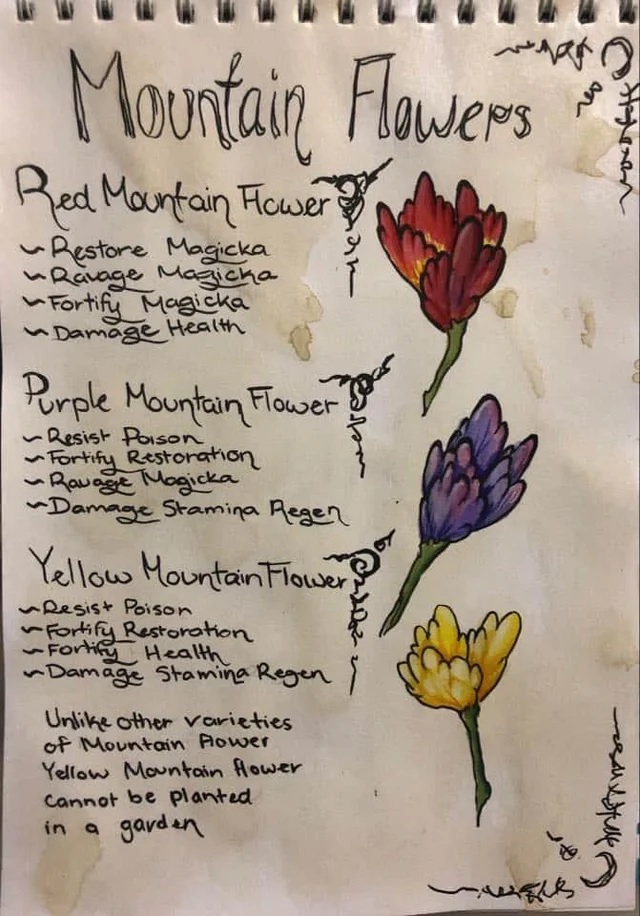 My hundred mods mean these have zero gold value, making them perfect for testing against new ingredients.

Truth be told, mountain flowers are rather dull. It’s smart to lump the rest of them in together like this, as they’re so common and mundane that they’re a staple of even a casual alchemist’s recipe book. This is your page one appendix entry, the supermarket sliced bread of the sandwich maker’s handbok. Here’s a good excuse to take a closer look at them though, and see that they’re a bit more colourful than their names, particularly the red. If you look at their models their petals are indeed as haphazard and irregular as that. 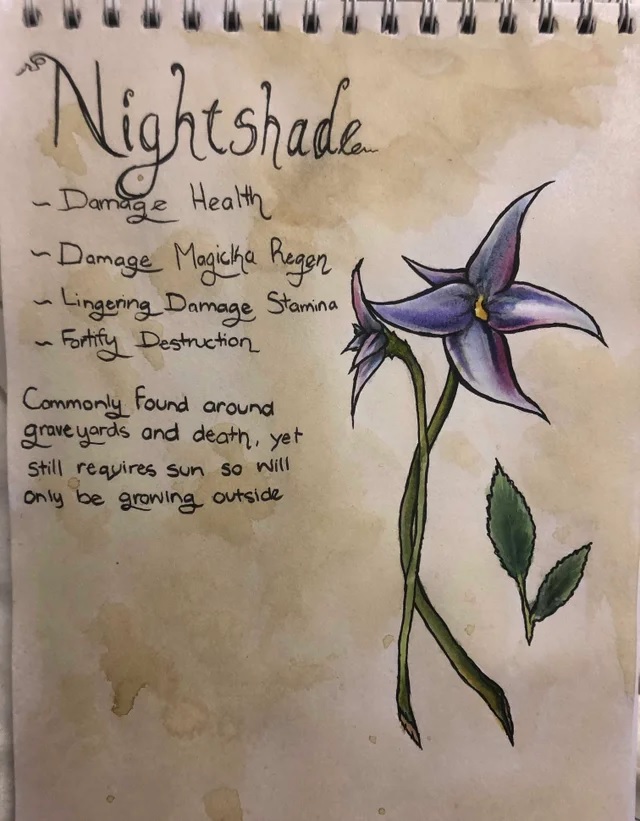 Now this is more exciting. We’ve all clipped some nightshade from a graveyard, and you can’t go wrong with a standard poison. Again, this brings out a detail I’d never noticed in all my hours of smushing endless plants into money tickets. The tiny blob of a yellow pistil pinches the centre of the flower beautifully, and then we reach out for more skilfully blended petals, this time purple and white. You can really see the convex shape of that bottom petal, and I really like the way she’s drawn the leaves separately, to aid in identifying the plant even though it’s not relevant within the game.

It would be easy to overdo the stylised text too, but instead we only get big loops and flourishes on the Gs and the Ys. 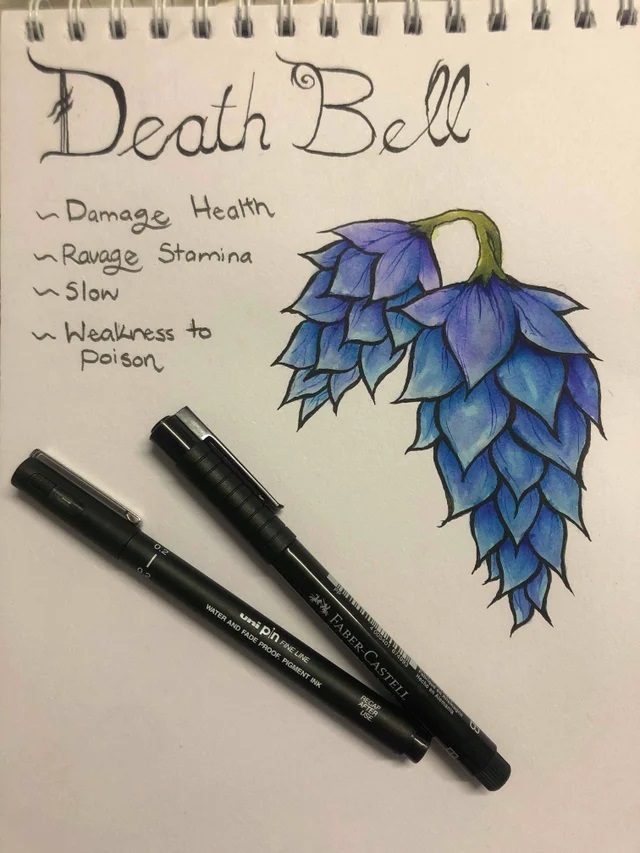 I used to eat grapes all the time. Why don’t I buy grapes anymore? Top tip: They make great ice cubes for wine. They don’t burst or dilute it, see.

And this is where it started. It’s not far off where the artist started with Skyrim, either, making this an actual research herbal, as apparently she only started playing a few weeks ago. Skyrim does indeed work fast.

I don’t think I encounter much deathbell myself, as it apparently prefers areas I spend little time in. It’s another solid drawing though. A strong start from an obviously skilled illustrator, but you can already see how the style developed from this into the more flavoured works above. I enjoy the connecting point where the green parts (I want to say ‘pedicel’?) visibly grip around the flowering parts. The use of lines here really gets across that feeling – imagine it yourself now – of pinching or gently tugging at a plant to test whether it’s ready to harvest. This deathbell looks like it needs a slightly practiced hand to pick it off cleanly, and I lke that very much.

If Skyrim 2 ever happens, and doesn’t fall the way of Half Life 3, I hope this is how they do alchemy. Imagine buying blank herbals, and filling your own little herbal with notes and drawings as you go. Or finding an abandoned camp in the wilds, its owner probably dead but leaving a combined field report/diary, sadly cut short. Here’s to you, Lady Llama. Let’s pour out a probably disgusting but nonetheless stamina-restoring solution of swamp petals and cave fart mushrooms to your future efforts.