Ants are a strong contender for the most fascinating creature on the planet. Arguably the most successful animal (discounting micro-organisms, those smug jerks), even. I was fascinated by them as a kid. There’s an ant with only one pair of chromosomes. There are ants that transform themselves into food storage units. There are kamikaze ants that defend their nest by exploding. Blind ants. Ants that form nests, bridges and even boats out of their own bodies. Ants that go to war, ants that farm, herd animals, spy on other colonies, take slaves.

In Grounded, Obsidian’s new mini-sized survival game, it doesn’t even take any of that to secure my undying love. When an ant sees you for the first time, it chirrups curiously, and tilts its head like a dog.

I love them. I will never harm them. If I ever play with another person and they attack an ant, I will fight them to the death. 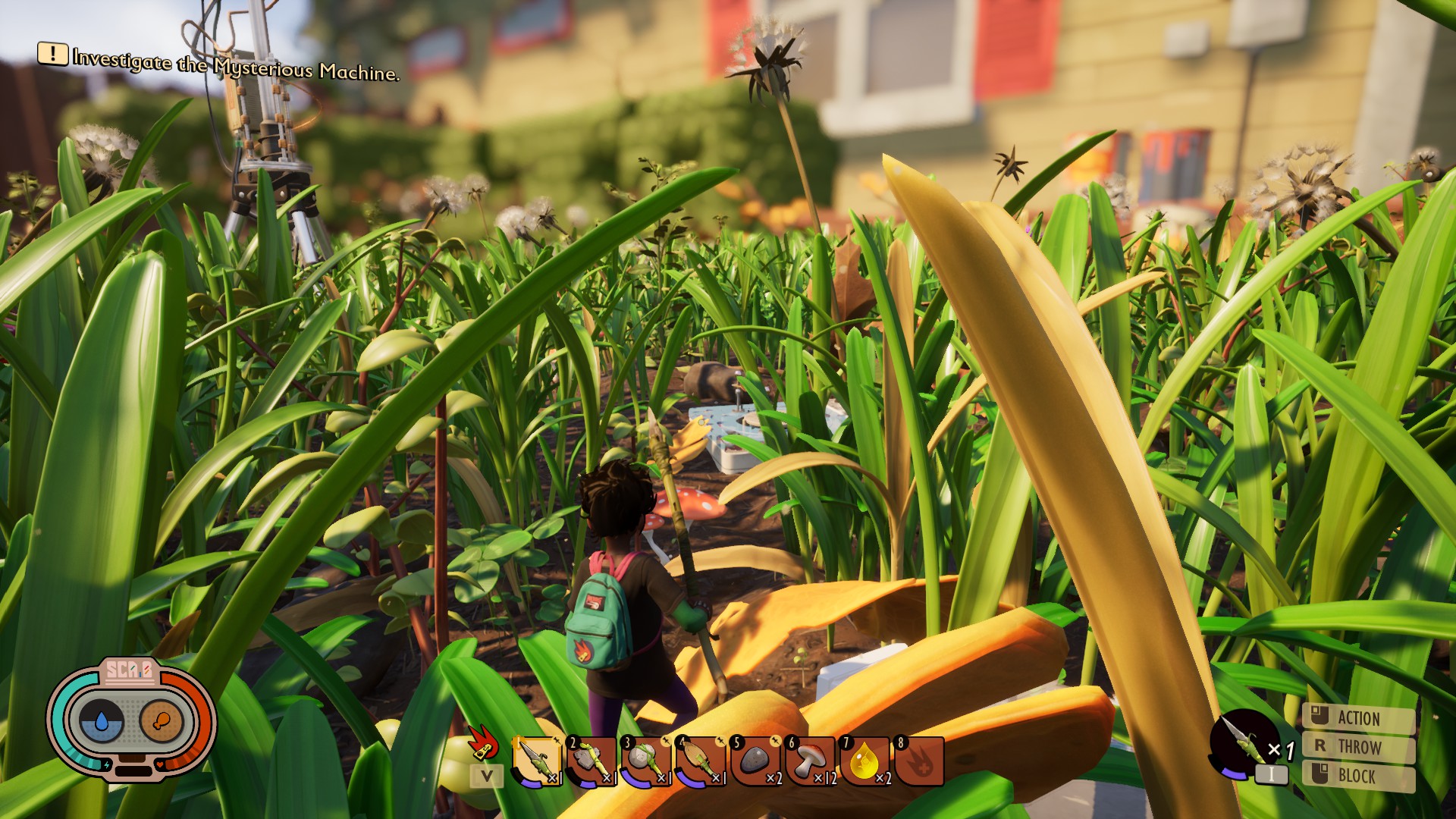 Truth be told, I have not explored efficiently. It’s a good place to wander in and enjoy.

Grounded is a survival and building game in which you’re a kid who has been shrunk down to the size of an Olympic athlete’s personality. You must gather materials, build a shelter, find food and water, and find out how all this happened – as well a way to re-embiggen yourself. Despite the mission text you’ll see on all my screenshots, I’ve utterly ignored this latter part of the game. Not out of contempt, but because I’m enjoying myself too much to worry about leaving just yet.

There doesn’t seem to be much to Grounded’s main story at this stage. Players have reported finishing it in shockingly little time, which, even for an early access title, will disappoint those who want a specific goal and a conclusive end to the game. Obsidian describe its current state as “groundwork laid out for our intended storyline”, so there’s surely more to come, but for the time being, unless you want to live in this garden world for its own sake, it’s best to wait (although its price will apparently go up incrementally as more features are added).

Happily, I am a bit in love with that garden world. 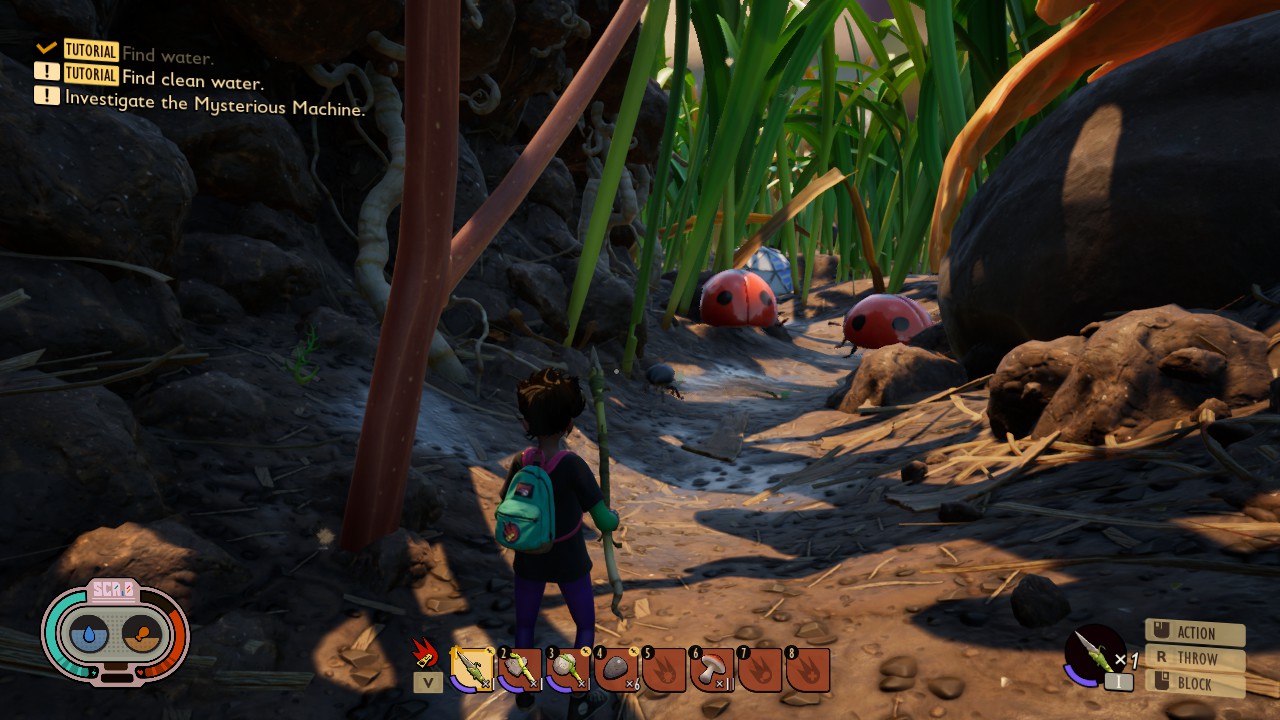 I’ve not antagonised a ladybird yet because I’ve seen what they do to aphids in real life. Terrifying, insatiable monsters.

It’s absolutely gorgeous, for a start. I mentioned my predilection for insect-sized perspective games when writing about Metamorphosis, so I admit I’m a tad biased. But this is a wonderfully realised garden. Aside from its vivid colours and lighting, and the novelty of seeing even the tiniest items rendered so huge, it feels full of life in a way that few survival games do.

Where other games will make wildlife scarce, or make everything ludicrously hostile or extremely avoidant, you won’t go far in Grounded’s lawn without seeing something moving. Precisely because you’re an alien figure to this environment, most of it has no instinctive script for dealing with your kind, and so simply ignores you.

And it finds an interesting, very comfortable ground between two other extremes. Most survival games are broadly similar. You’ll want wood, and stone, the metal, maybe coal, or string. It’s valid but it’s all the same stuff and it can get boring. And then you get games like Wrongworld, in which you’re doing the same basic things, but the world is bizarre and unknown, with its own rules and subversions for you to learn. Grounded is right in the middle of them. Grass is essentially wood, and you’ll start by gathering fibres and pebbles to fashion into spears and axes. Sap can become fuel, mites provide fuzzy coats and thus clothing. Your emergency food is mushrooms picked from the floor, but you’ll quickly start hunting aphids and weevils. 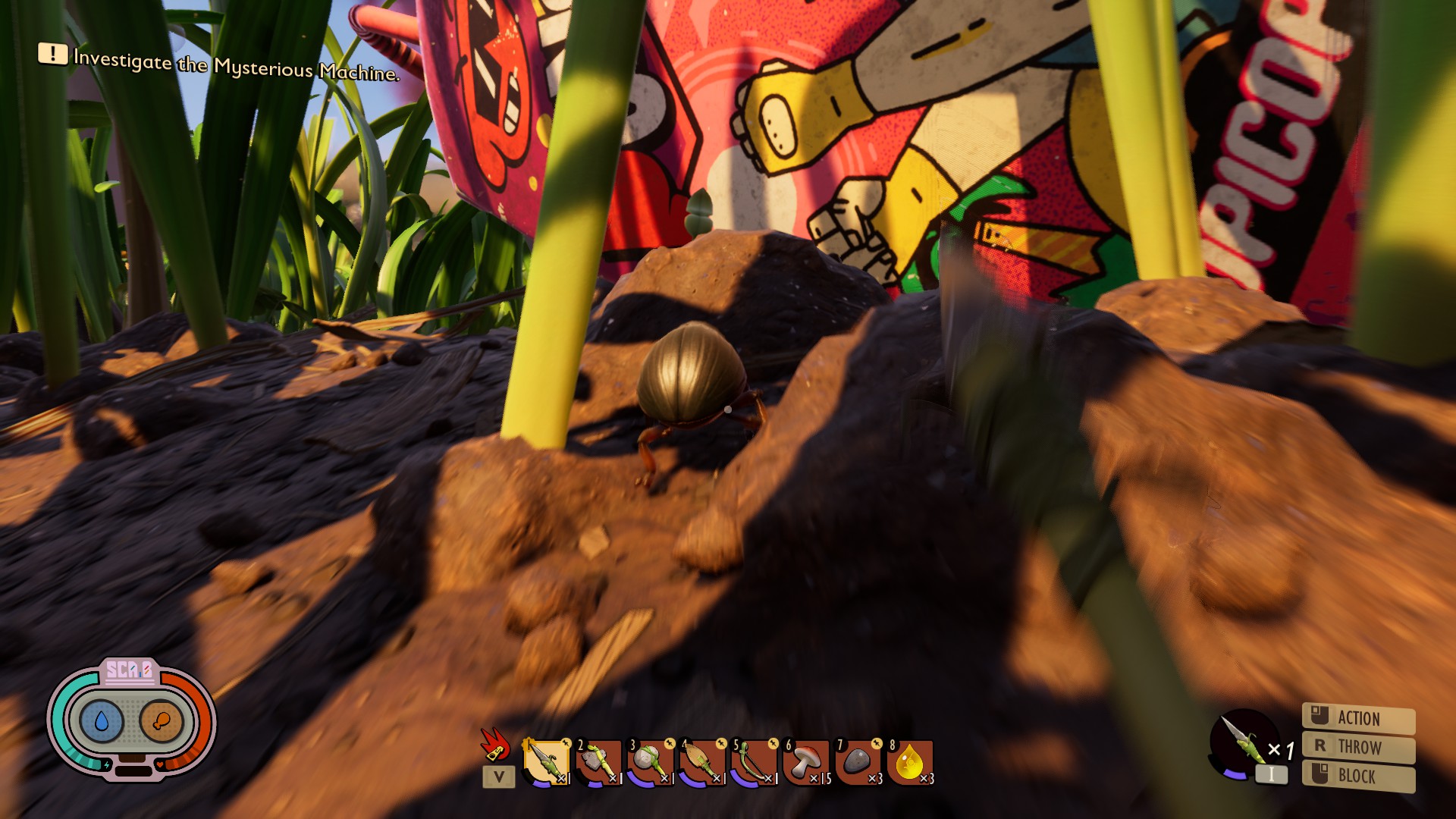 Hunting a weevil. Everything is so busy and mobile, it’s hard to get a static shot.

It’s essentially all the same stuff you usually do, but it breaks the usual patterns, bringing them much needed novelty. And it works better than, say, an alien world, because although not a normal environment for humans, it’s one that’s familiar. It makes intuitive sense because its animals and resources are recognisable everyday ones usually beneath our notice. At one point I noticed there was a crafting recipe for a shovel, and it required a piece of acorn shell.

I hadn’t come across any of that yet, but I figured it would make sense to head towards the gigantic (normal-sized, obviously) tree I’d seen. Sure enough, when I got there I found several acorns stuck in the earth around its roots. There are small pools of unsafe water here and there, but if you want clean water… well, look up! There are dewdrops stuck to the underside of the grass. Give the blade a whack and the water will fall off. That grass is your main building resource and it is, naturally, everywhere, which I find refreshingly generous. 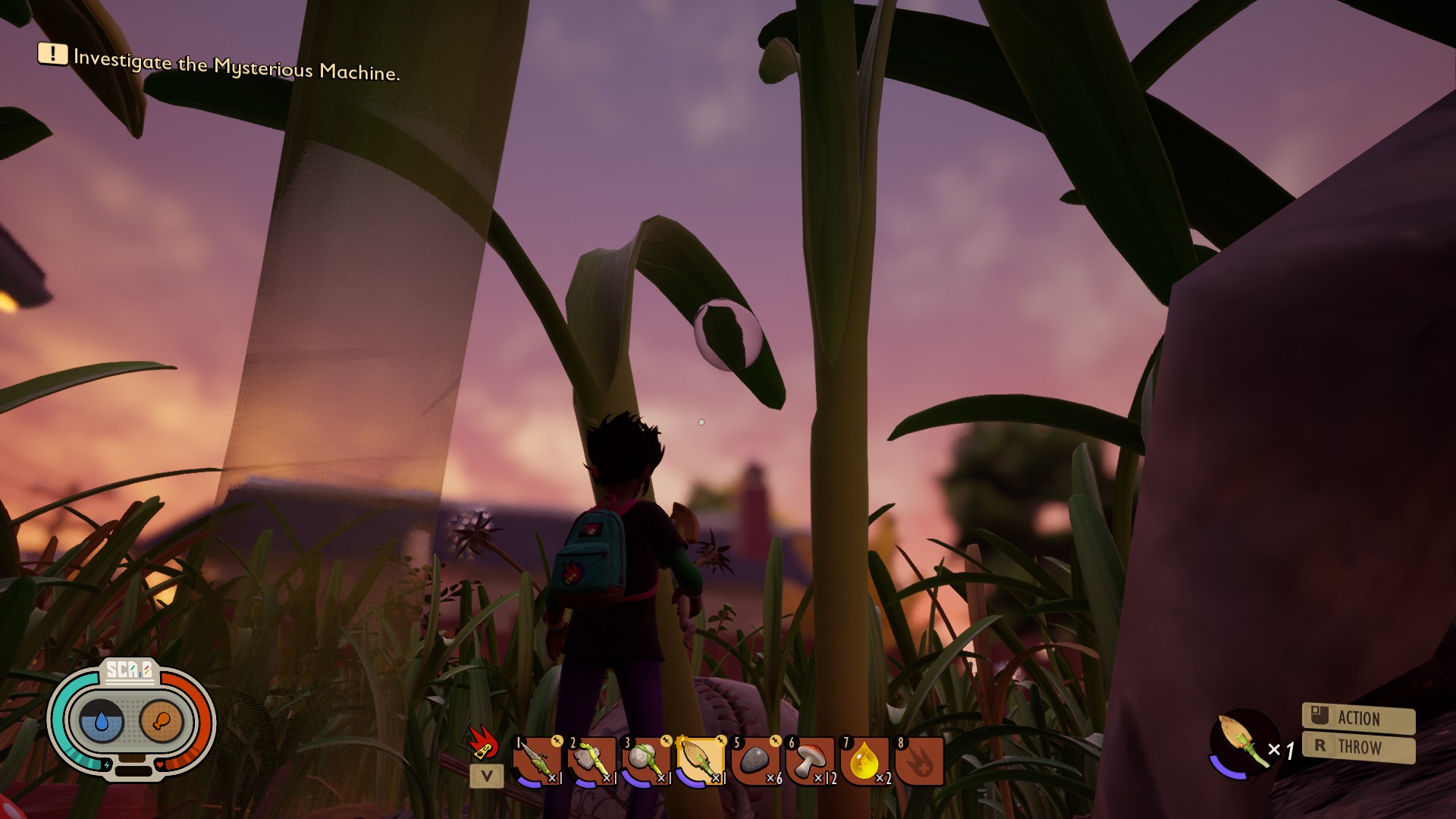 Night time is very dangerous but can be slept through with a cheap and easy to make shelter. Dawn and dusk are worth being awake for, though.

It makes for a unique orienteering challenge too, blocking out the middle distance so that it’s easy to get lost while gathering, chasing or fleeing. But it’s easy to find a way back too, since instead of landmarks you mostly have skymarks, using the towering human objects to navigate. The grass also bends when larger creatures brush against it, making for some great worrying moments where you hope that’s just a ladybird coming at you, not a grim spider. Though it could perhaps use more climbing and vertical movement opportunities, that might undermine it a little, and I like that there’ve been several times where I’ve chosen not to cut down a specific blade of dry grass because it forms a useful ramp.

Crafting itself is straightforward enough too. Most objects and tools are made of only two or three ingredients, with few intermediary resources. Unless you’re going heavily into building, it’s not necessary to spend very much time crafting, as you can cover the basic tools quite quickly. Though there are clothing and armour options, some of which give you perks like faster running or stamina regeneration, the list isn’t particularly long. Those screens do a good job of nudging you into exploring by revealing the existence of new resources, and finding those works like the acorns, encouraging you to apply a little logic to your next exploration efforts.

The crafting right now does seem to incline more towards building, though, with foundations and scaffolding and support beams, and several decorative items already. Construction itself requires minimal faffing around, mostly being a case of placing blueprints and then holding E at them for a moment. You can partially build things if you don’t have all the resources, and build little pallets to stockpile grass and weed stems, your basic construction materials. 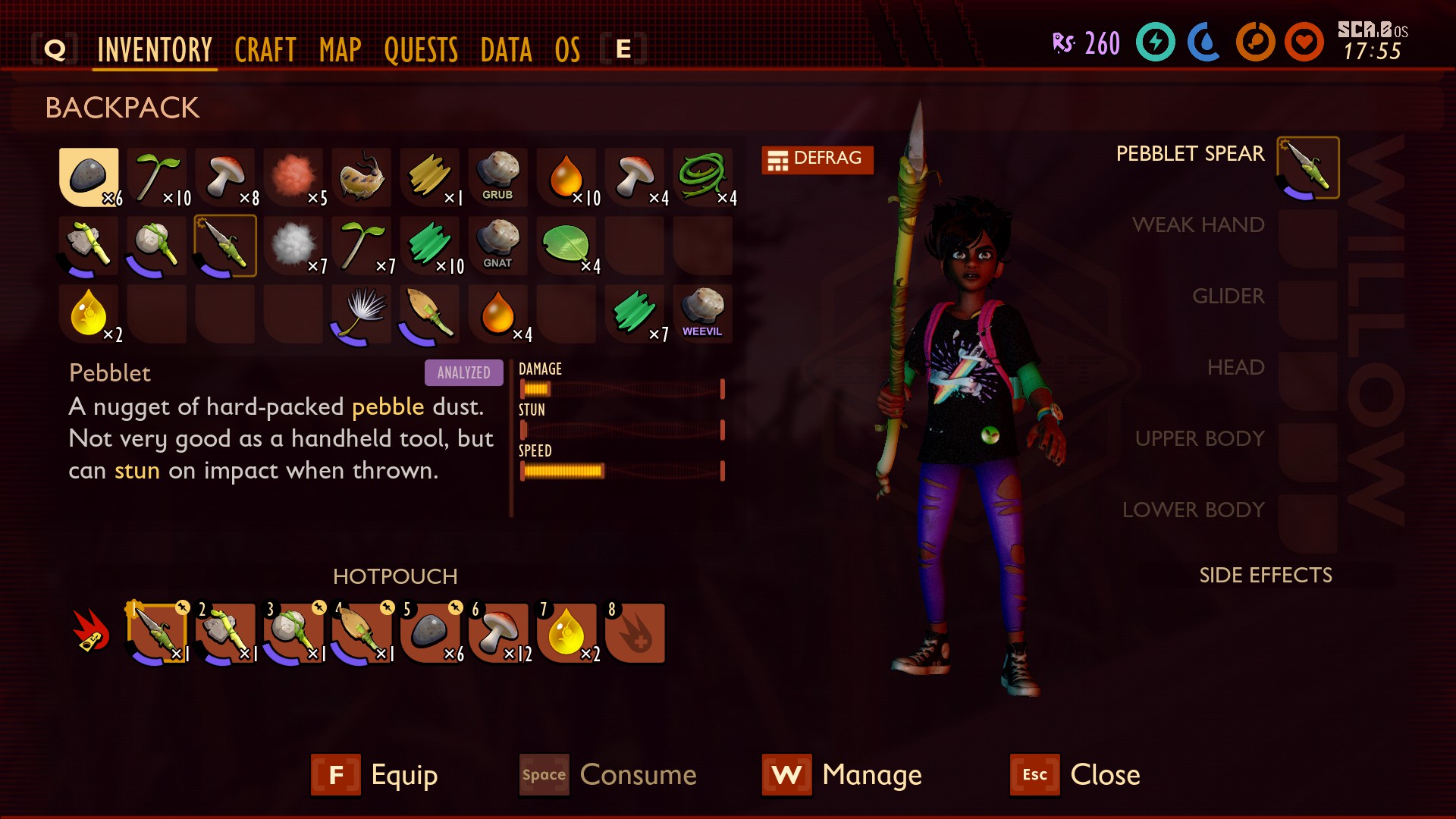 The inventory screen is generous enough, and storage boxes cheap enough, that it’s not too much of a time sink.

But the star of the show is the wildlife. The intuitiveness of resource gathering applies to the bugs, too. I have resolutely avoided its semi-underground areas and crevices, and been extremely wary of wooden logs and fences. Anything that a spider or other predator might lurk in. I’m far too aware of the horrific things that insects do to each other to chance a spider, even though when they get you, it’s a case of them merely smacking you to an ordinary death.

Part of me is disappointed they didn’t play this straight and have custom death animations for different bugs, but that would turn it into probably the most terrifying game ever made and drastically change its tone, so I can’t really give it a hard time for it. Spids are scary enough anyway (hence its refreshingly thorough options to incrementally tone down their spideriness for arachnophobes). 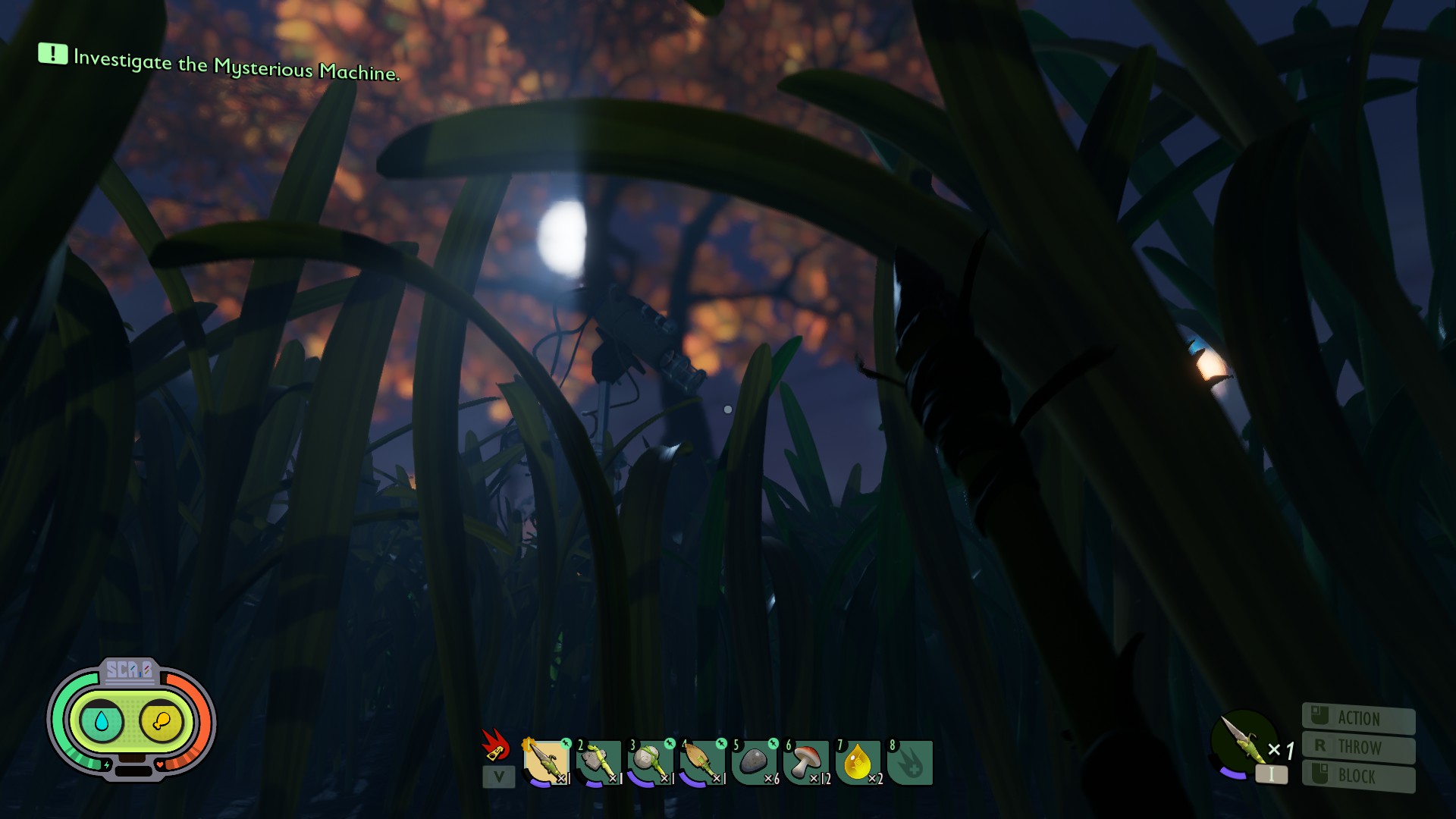 Nights are very dark, and though you can make torches, I am too much of a wuss to stay out for long.

Gnats are wonderfully dopey, fuzzy little things, bumbling around in drunken patterns, bumping into things, and sounded more disappointed than hurt when you jab them with a spear. Ladybirds shuffle around looking for aphids, hulking over other creatures. Aphids cheep in alarm and flee up grass stalks when you approach, unaware that you can knock them down with your crafty human tricks. Everything chirrups and chirps and hisses and hums around you, giving both a pleasant atmosphere and a frequent need for caution.

But it’s the ants I love most. They can show up anywhere, but are most common close to their hills, often moving alone in predictable paths, foraging for sugary food or meaty prey. They will leave you alone if you don’t bother them, and I’ve even taken to dropping them food in the hope that they’ll mistake me for an aphid and start protecting me. I’ve drunk water from a pond alongside an ant doing the same. I’ve climbed up a rake and watched them run about the garden, ganging up on weevils and disappearing down their holes.

I am sure that if I went too close to their nests they’d rip me apart. I imagine it’s possible, even profitable, to hunt them, and I would not be surprised if eventually the game’s campaign demand that I descend into their caverns to wage war for some resource or other. I will not. I would choose to stay here forever rather than hurt them. 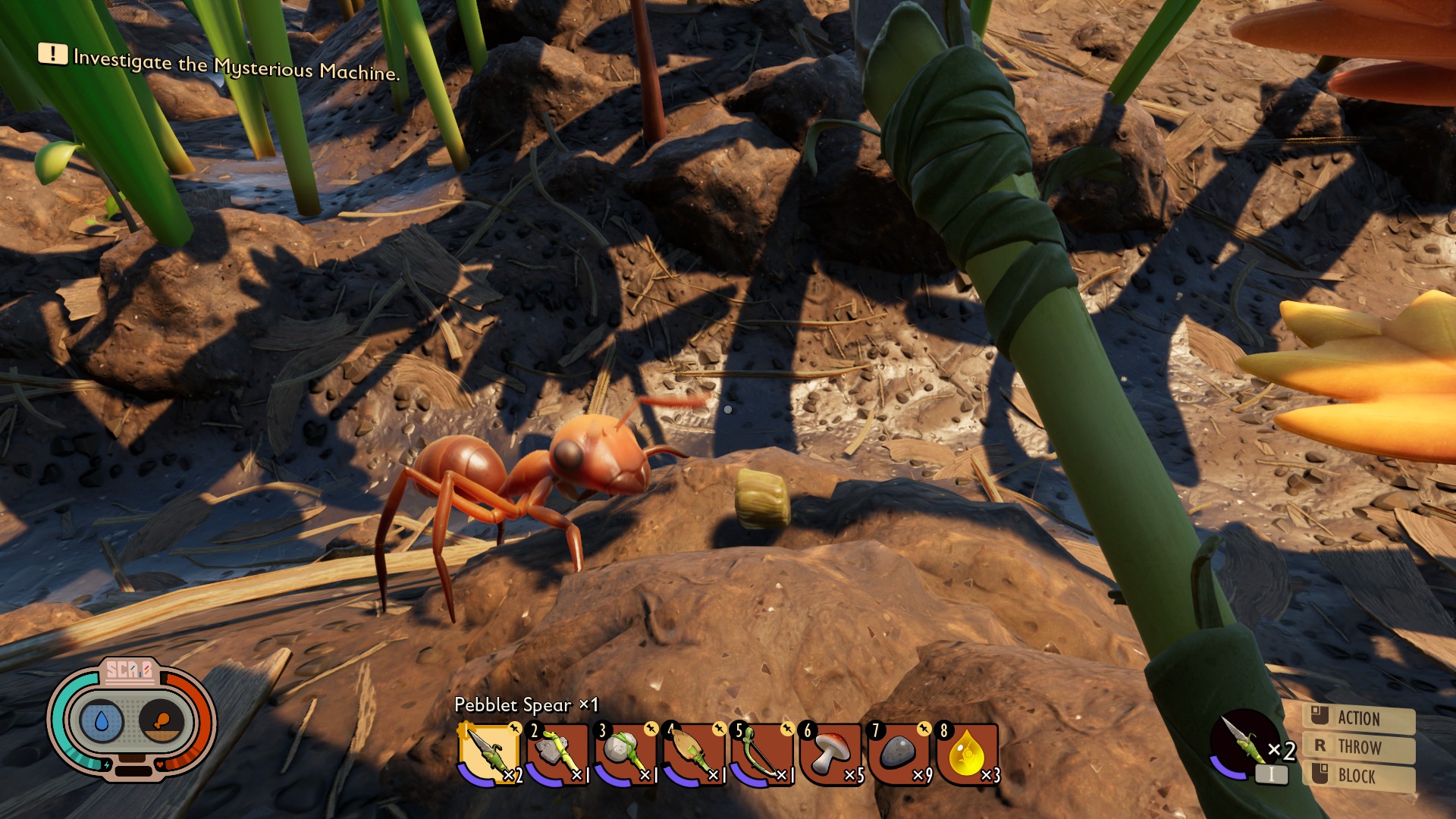 Feeding the ants will probably backfire. I don’t care.

Grounded is off to a strong start. Its UI is in need of some fixing (it’s entirely mouse driven, despite the misleading keyboard icons), its campaign unacceptably short to those who prioritise it, and players have reported having trouble getting co-op to work. Co-op is also restricted to those with an XBox account, an awkward and unsatisfactory arrangement that will be a dealbreaker for some. I would be far more critical if these issues aren’t addressed before its full release (currently estimated for sometime in 2021). But for its first public iteration, I am impressed. Turns out I can afford a nice garden after all.