It’s been quite a while since the Razer Blackshark last surfaced on shop shelves, but today marks the return of this wired gaming headset in the form of the delightfully low-key Blackshark V2. Gamers of a certain age may remember the first Razer Blackshark had a rather natty aviator look with its wiggly green mic cable and hardback ear cups, but this new V2 model is a complete revamp of that original headset thanks to a new pair of 50mm audio drivers not seen on any other Razer headset before, a cardioid mic with USB sound card, and super soft memory foam ear cushions to name just a few of its new features. It is, in short, a very different headset to its helicopter-inspired predecessor, but judging by my time with the Blackshark V2, it’s all the better for it.

For starters, its soft memory foam ear cushions, oval ear cups and steel frame are immensely comfortable to wear for long periods of time, which hasn’t always been the case with other Razer headsets I’ve tested in the past. As a notorious headpinch sufferer, finding a headset I can wear for more than 30 minutes at a time without feeling like I need to rip it off and take a break is a pretty rare occurrence these days, but the Blackshark V2 happily falls into that small and select number of headsets I can wear for hours on end.

The Razer Blackshark V2 is a great gaming headset that sounds, looks and feels fantastic, and its USB sound card really makes a difference to its overall audio quality.

Its enclosed ear cups also offer excellent passive noise cancellation, so much so that I was blissfully unaware of my cats meowing for their dinner last night until one of them jumped up on my lap to demand I pay them some attention. It also completely masked the sound of my clacking mechanical keyboard, too, meaning I wasn’t being constantly distracted by my rapid tapping of the WASD keys, or the frantic clicking of my mouse. Instead, I was able to completely focus on the task at hand, much to the dismay of my hungry cats.

It’s Razer’s new 50mm drivers inside those ear cups that are the real stars of the show in the Blackshark V2, though, as these deliver a wonderfully clear, rich and balanced sound that works brilliantly for games and regular music listening alike. This isn’t the first time Razer’s used drivers of this size in their gaming headsets, of course, but the Blackshark V2 sets itself apart thanks to the three distinct audio chambers and dedicated tuning ports that lie inside each driver, allowing you to manipulate the highs, mids and lows with its bundled USB sound card much more effectively without everything becoming a muffled, muddy mess.

You’ll need to download Razer’s Synapse 3 software to make the most of the USB sound card (which is only compatible with Windows 10 PCs, I might add, despite being a multi-platform gaming headset), but it’s well worth doing, as it’s here you’ll be able to tinker with (that is, turn off) its THX 7.1 Spatial Audio settings, enable sidetone so you don’t feel like you’re underwater when you’re talking into the mic, fiddle with its audio and mic equalizer presets and much more besides. The headset will also be getting specific THX Game Profiles for 18 of today’s most popular multiplayer and competitive games such as Apex Legends, CS:GO and Valorant, according to Razer, but these won’t be available in Synapse 3 until August 6th so I wasn’t able to test them. 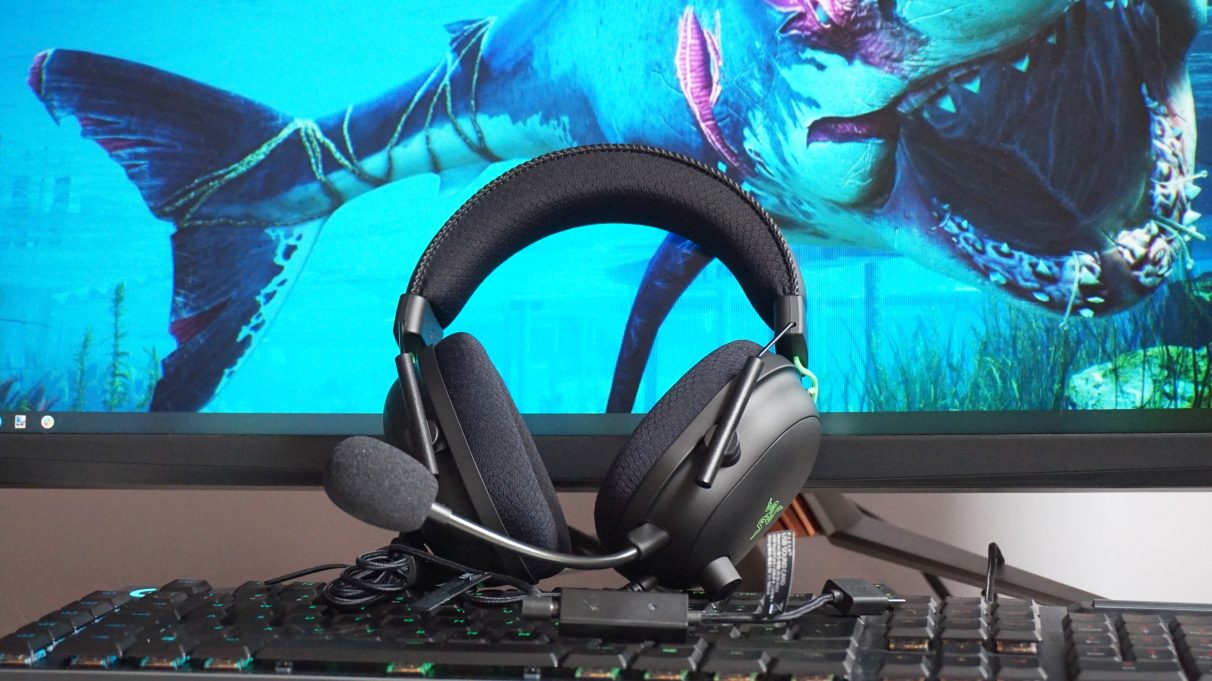 Still, I found the Blackshark V2’s regular audio equalizer settings were more than up to the task of producing brilliant-sounding audio in a wide variety of games, although I’d recommend switching over to its Game equalizer preset rather than sticking with its Default one. Indeed, I found the latter was a bit flat when I booted up Doom (2016), especially when I had the THX Spatial Audio setting turned on as well.

In truth, I’ve never found a headset whose virtual 7.1 surround sound software actually enhances a game’s audio, and I didn’t get much benefit from any of Razer’s THX stuff on the Blackshark V2 either. However, once I’d switched off its THX settings and switched over to the Blackshark V2’s Game preset, it was properly transformative, turning insipid, dull gun shots into roaring blasts of power. The Game preset also enhanced the delicious splatter and spit of disintegrating demon limbs, and the mechanical growls of the UAC’s Mars machinery has never felt more ominous and foreboding. I was also able to accurately pick out all the wayward stragglers in need of a good Super Shotgun introduction, too, and the sound of impish fireballs whisking past my left ear really made me feel immersed in the busy battlefield.

Hellblade: Senua’s Sacrifice sounded brilliant, too. Again, the THX Spatial Audio completely destroyed its evocative binaural soundtrack, but keeping it switched off with the Game preset enabled sent tiny little shivers down my spine. The voices inside Senua’s head had a wonderful, natural clarity to them, and the spacious soundstage left plenty of room for the opening cutscene’s delicate water splashes and rumbling thunder to come through against the torrent of snickering whispers.

The Blackshark V2 also proved an able companion for the warm orchestral music of Final Fantasy XV, delivering a rich, detailed soundscape that felt expertly balanced against the game’s various environmental effects. From the light flutes and guitar strums of the chocobo theme dancing merrily on top of the deep groans coming from the monsters bathing in Duscae’s vast lake to the zip of Noctis’ magical swords slicing through its soaring battle themes, the Blackshark V2 never missed a beat. 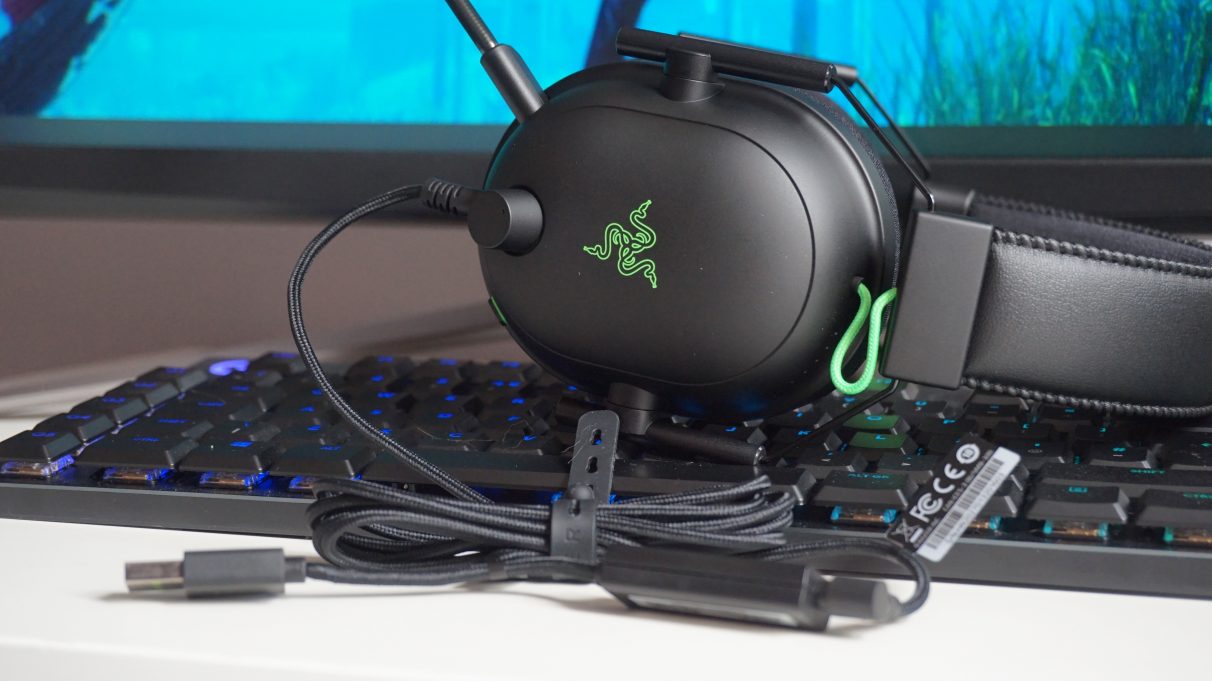 You still get a pretty decent audio experience without the USB sound card if you want to use the Blackshark V2 with other devices with a 3.5mm audio jack, but something is definitely lost in the process. When I re-tested the headset to see how it held up on its normal 3.5mm connection, for example, Doom’s demon squelching wasn’t nearly as impactful, Final Fantasy XV didn’t feel as warm or detailed and Hellblade’s flurry of voices sounded noticeably more muffled than before.

Ditching the sound card also means you can’t make use of its cardioid microphone on PC, as the Blackshark V2 only has a combined 3.5mm jack and doesn’t come with an splitter adapter in the box. And that would be a very silly thing indeed, because this mic is really fantastic. When I recorded myself talking in Audacity, there wasn’t a single trace of any hiss or background fizz getting in the way of my speech, and plosive parts of my chats didn’t descend into breathy blow-outs, either.

The default mic experience was so good, in fact, that I felt little need to tinker about with its various settings in Razer’s Synapse 3 software. The mic’s ambient noise reduction feature did nothing to erase my clacking keyboard sounds, for example (although it did make my voice louder to try and compensate), and I wouldn’t advise turning up the Vocal Clarity option too high, either, as this made my voice sound quite thin and tinny.

Likewise, the Mic Boost and Conference equalizer presets made me sound very nasal, like I had some sort of cold, and its Broadcast preset had nothing on the smooth, radio-style tones you get with the Blue Voice software that comes with Logitech’s G Pro X headset. All you really need is from Synapse regarding the microphone is that sweet, sweet sidetone setting. Still, despite having a plethora of slightly useless microphone options, this doesn’t detract from the fact that this is still one of the best and clearest headset mics I’ve ever tested. Plus, to make it even better, it has a small yet tactile mute button on the back of the left ear cup that’s both easy to find and press in and out. A small beep for that little bit of extra confirmation would have been nice, but it’s a small complaint in the grand scheme of things.

Topping it all off is a nice big volume wheel on the side of the left ear cup, which is always handy when you’re in-game and quickly need to turn down the sound to hear the crying pleas of a hungry cat (or a hungry husband) without having to Alt-Tab out to find the master volume control. It’s quite sizeable, too, not so much that it looks out of place on the headset, but still large enough to comfortably wrap your fingers around and give it a good twist.

All in all, the Razer Blackshark V2 is an excellent return to form for this long-lost gaming headset, and a very worthy alternative to the more expensive £110 / $130 Logitech G Pro X that currently sits right at the top of my list of the best gaming headsets you can buy today. Personally, I’d say the Logitech is arguably even more comfy than the Blackshark V2, not to mention that you also get its excellent Blue Voice software for that extra touch of clarity and jazzy radio vibes on your microphone, but if you’d rather not spend over £100 / $100 on a gaming headset, the Razer Blackshark V2 is almost certainly going to be the next best thing. Its audio quality is superb, its microphone is one of the best in the biz, and it doesn’t pinch your head as soon as you stick on your face. What more could you possibly want?