When I reviewed all the major cloud gaming services earlier in the year, one of my biggest frustrations with Nvidia’s GeForce Now platform was that it was a real faff to work out what you could actually play on it. Thankfully, Nvidia have finally rectified this issue by introducing a new feature that lets you sync your Steam library to your GeForce Now account, making it much easier to see which of your many hundreds of games are actually supported by the streaming service.

To get yourself set up, you’ll need to open up the GeForce Now app on your PC and click on its Settings cog. In the top right corner, there should now be a new Game Sync section with a little sync button you need to click. If there isn’t, you’ll probably need to update GeForce Now.

Still, provided you’ve got your Steam profile set to public, all you need to do is hit that sync button, log into your Steam account through GeForce Now and you’re done. Easy peasy. Once it’s set up, you can also disable Game Sync at any time, and you can refresh it if you’ve recently bought a new game and want to see if it’s on GeForce Now as well.

Alas, the feature only works with your Steam library for now, not your Uplay and Epic accounts that are also supported on the service, but hey, baby steps. Besides, Steam is the probably where most of your games live these days, and it will definitely go a long way to help making the service more usable than before. 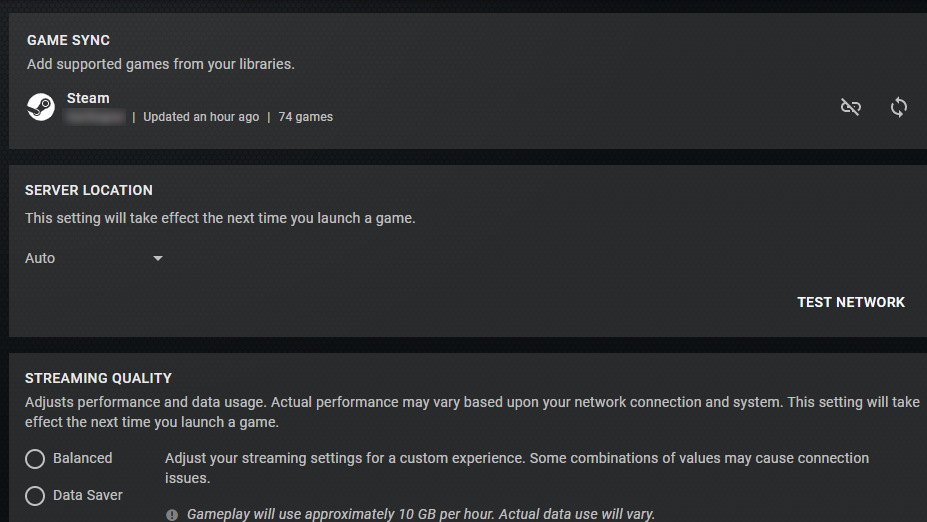 Like most of the big cloud gaming services around at the moment, GeForce Now is based around the idea of letting you play the latest and greatest games without having to own a high-powered gaming PC. If your PC’s a bit creaky or you’ve since swapped it for a basic laptop, you can still play games with it by tapping into Nvidia’s hardware in the cloud rather than what’s inside your device.

That’s the idea, at least. Indeed, when GeForce Now finally came out of beta earlier in the year, Nvidia were very cagey about which games were actually supported on the service. It taps into your existing Steam, Uplay and Epic Games Store libraries, so it never required you to buy games for it like you do on Google Stadia, but the games in said libraries also have to be supported by the service, which involved tedious manual searching to see what you could actually play.

They advertised a couple of the big hitters such as Fortnite and The Witcher 3 within the app when you fired it up, but figuring out what other games from your library worked on GeForce Now was a right pain in the rear. Combine that with the constant flip-flopping of several major publishers and developers leaving and re-joining the service over its first few months and it was like watching a car crash in slow motion.

Things have settled down a little bit since GeForce Now’s tumultuous launch. Nvidia now let developers opt-in to the service before making their games available on it, but there are several big publishers who are still missing in action. Judging by the 74 games I can now play on GeForce Now from my synced Steam library (which is still only 20% of my entire library, I might add), Square Enix have brought back a number of their big hitters (although no Final Fantasy XV), but there’s still no sign of Bethesda, Activision Blizzard, 2K, Konami or Rockstar. There’s a lot of room for improvement, then, but as I said before, baby steps and all that.

Fundamentally, the biggest issue I had with the service – finding out what games you can play on it – has now been fixed, which is a good thing. Now we just need more games to play on GeForce Now, and Nvidia might finally have a decent chance of having a cloud gaming service worth paying for.