A lot of people, quite reasonably, didn’t pay much attention to April Fool’s Day this year. I certainly didn’t, so I only vaguely noticed Mojang announcing a Minecraft update that would give the game infinite, Enter-The-Spiderverse-Style dimensions to explore. It was cute, I figured, but not really the most convincing fake announcement. Alas, though, it turns out I was the April Fool all along: not only was the promised update completely real, but you can still play it, and it’s utterly astonishing.

It’s very simple to do. Just go to the ‘Installations’ tab of yer Minceraft launcher, then hit the “new” button, and scroll til you find “Snapshot20w14Infinite”. Cook yourself up a world (for quick results, set it to creative mode, and once you’re in, set yourself up with a nether portal, and a stack of book-and-quills. Why not do what I did, and rudely replace a villager’s entire bedroom wall with a swirling gateway to madness? 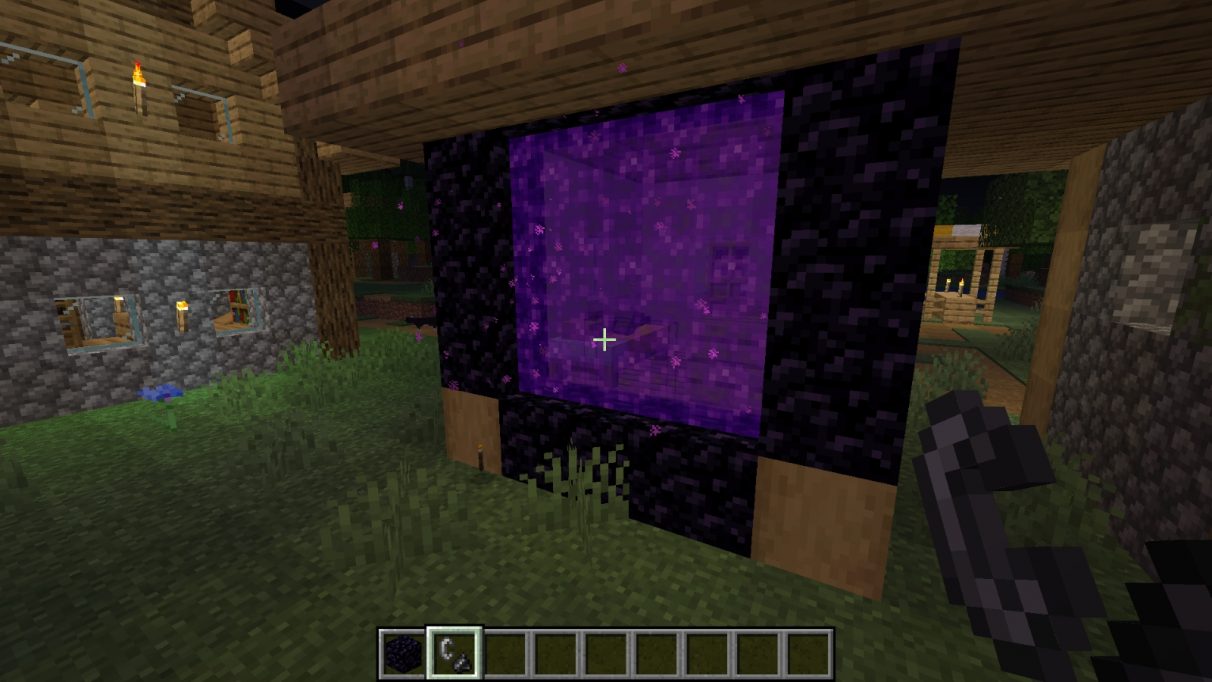 Bless him, he slept right through it.

Then, get yourself dimension-hopping! All you need to do is write something in one of the books and chuck it into the portal, which should turn a weird colour to let you know it has worked. The thing you write in the book serves as a seed to generate a dimension with an impressive list of randomisable factors (it’s explained, along with a list of pre-set Easter Egg worlds you can visit, on this here wiki). You’re highly unlikely to get the same one twice, as there are more than two billion dimensions possible for any given world seed, and therefore around 40 octillion in total. Which is a bit Yikelangelo’s David, isn’t it?

Anyway, the wiki link is above if you want to read up on how it works. For now, lemme show you the wonders I saw just from typing five snippets of complete bullshit into books: 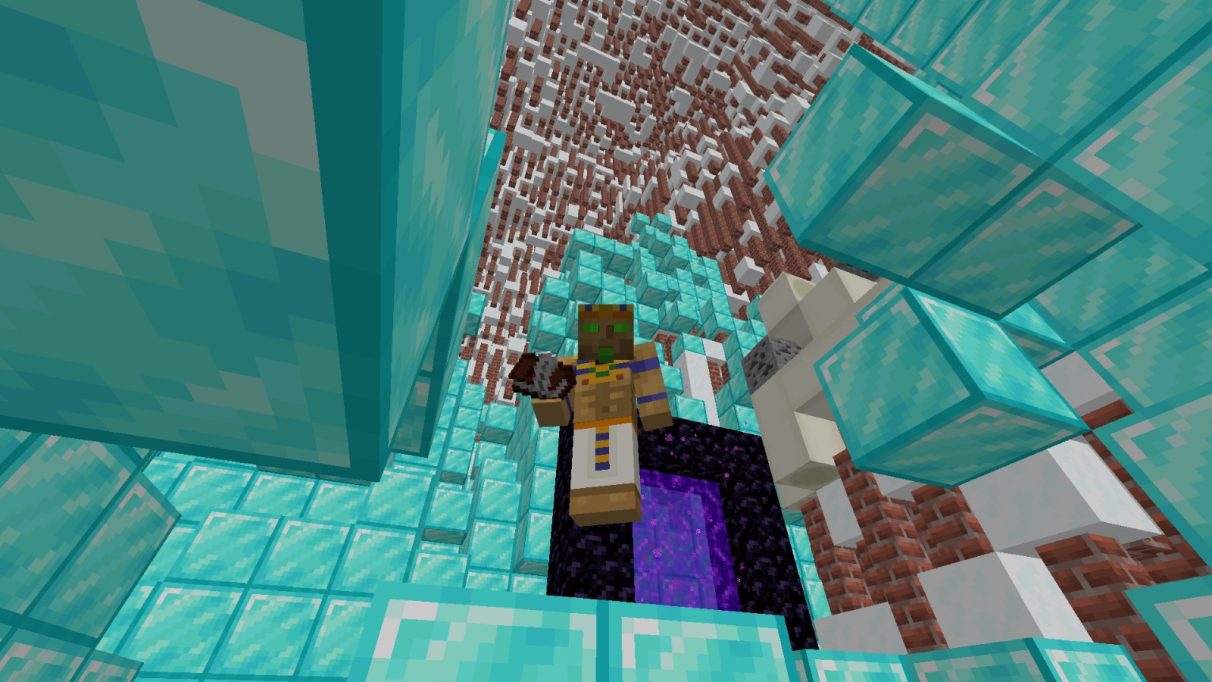 Business Secrets Of The Pharaohs.

The legendary war cry of Gladiators’ John Fashanu is a great way to bless any new endeavour, and so I thought it would be a fitting phrase with which to begin my transdimensional odyssey. The portal turning the colour of a cartoon fart cloud felt like a bad omen, but once I made it through, it became clear that the gods were in favour. The Awooga Dimension comprised a series of tall-cathedral like caverns carved from brick walls and snow, with accretions of diamond blocks filling their lower reaches. Ha! Just one jaunt as a a multiversal explorer, and I’d already struck it rich! Stick that up your bum, Gimli off of Sliders. 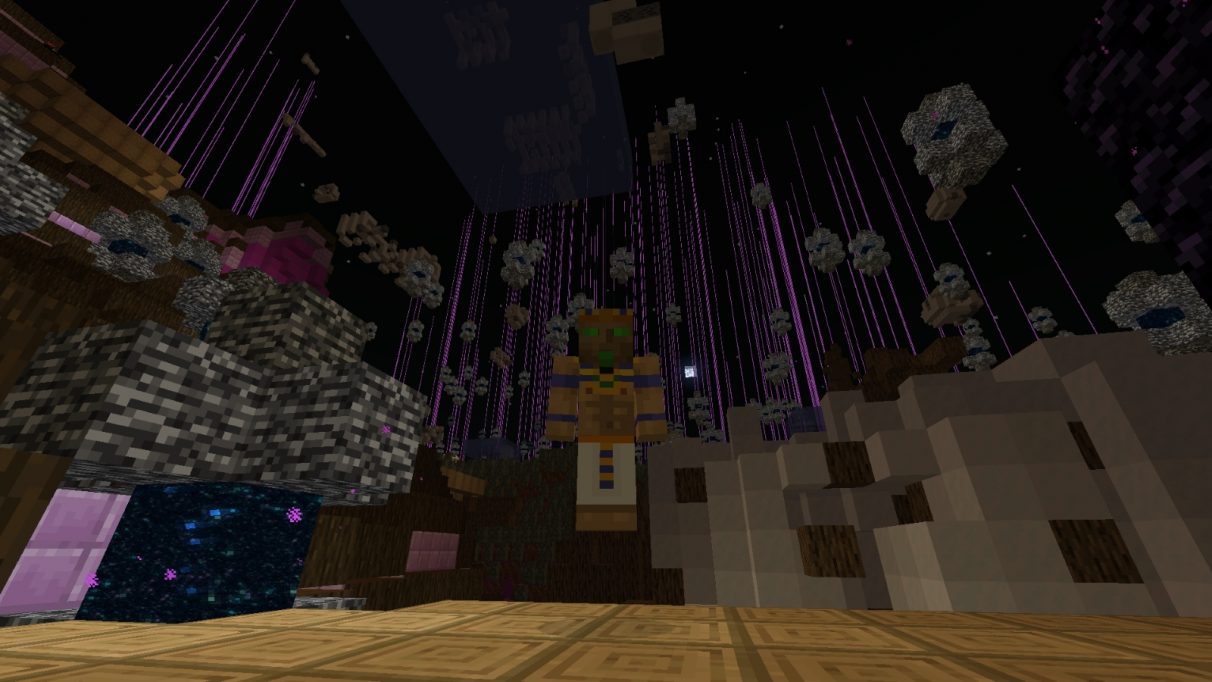 ♬ Take me down to the Saveloy city, to become a god and behold infinity ♬

Now we’re talking. Saveloy City was well good. Imagine if Half-Life’s Xen had been designed by Cosmo D, and you’ve got an idea of the atmosphere here. Pillars of relaxing purple light shot up into a lime green abyss, from across a landscape comprising brown brick ziggurats suspended in space, twisting megastructures of oak log and bone, and compact nodes of bedrock with windows into a strange teal void at their hearts. Exploring out from my point of entry, I found a new biome where End Dragons flew in tight circles through a gigantic sea of unrefined lumber, carving out strange canyons under a tiny, sickly moon. Lovely stuff. 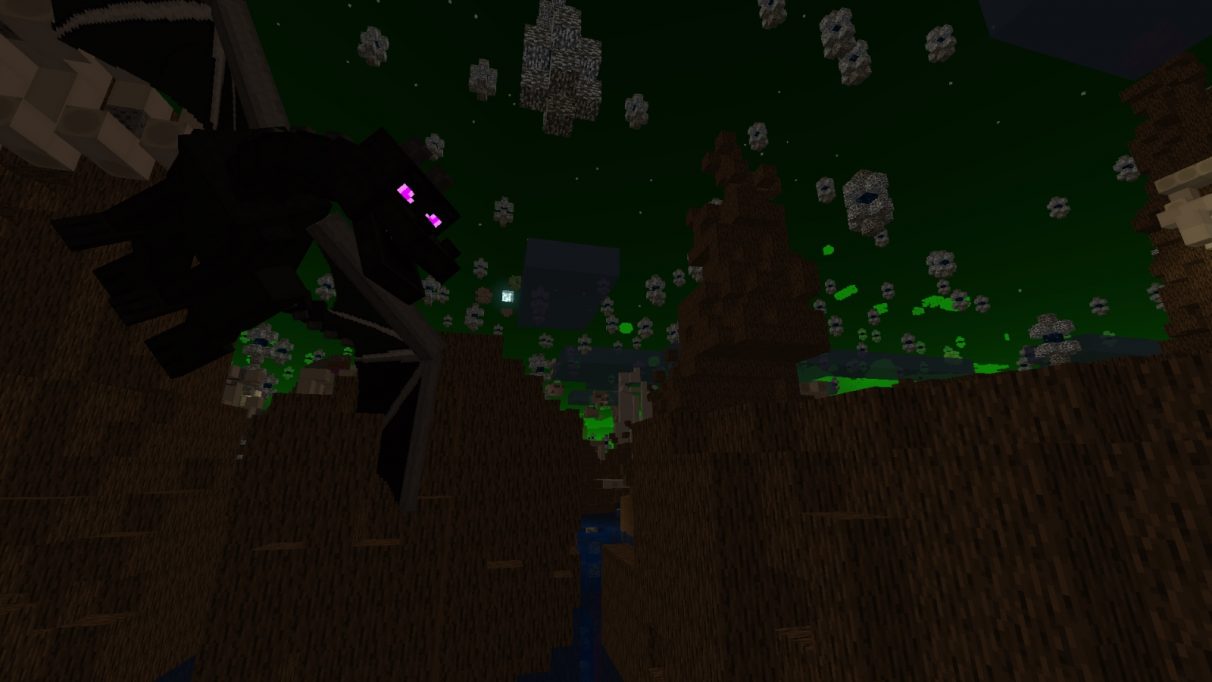 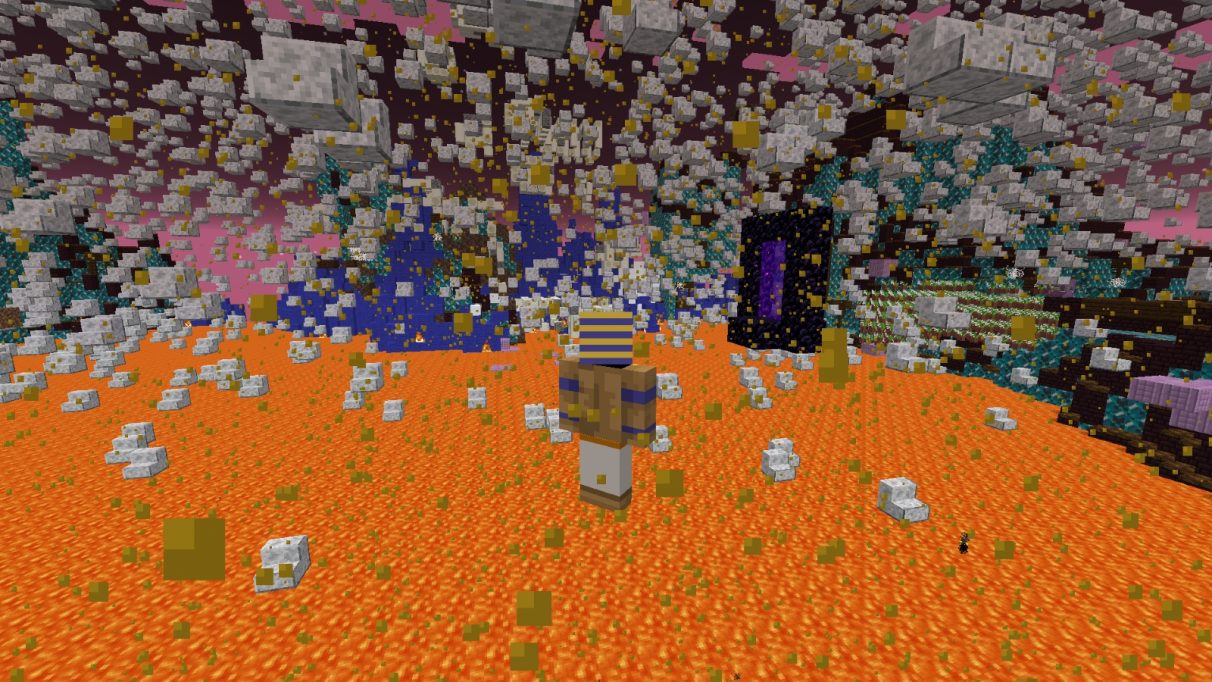 And Alexander wept, for there was nothing more to conquer.

Hated this one. For a start, it was a glaring mess of colours, with oversaturated magma blocks and blue wool predominating. And then the sound was completely busted, too. Instead of rain, there seemed to be torrents of yellow rocks falling from the sky, and they made a noise like five hundred giants having a rock-eating contest in my inner ear. Not today, Mozart, indeed. Then, of course, since there was finally someone to observe it and collapse its uncertainty-state, every single block of the woolen landscape that was touching magma caught fire at once. And rather than a burny noise, every bit of fire made the noise of a xylophone being plonked in a different key. Monstrous. Got out of there pronto. 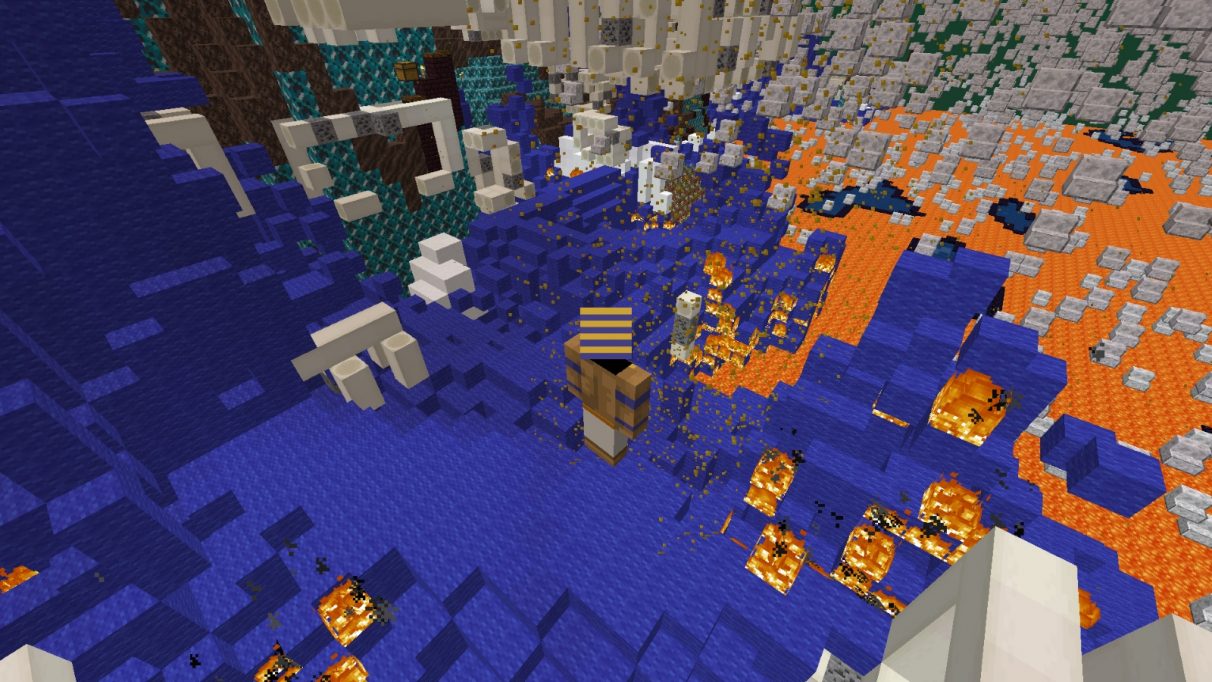 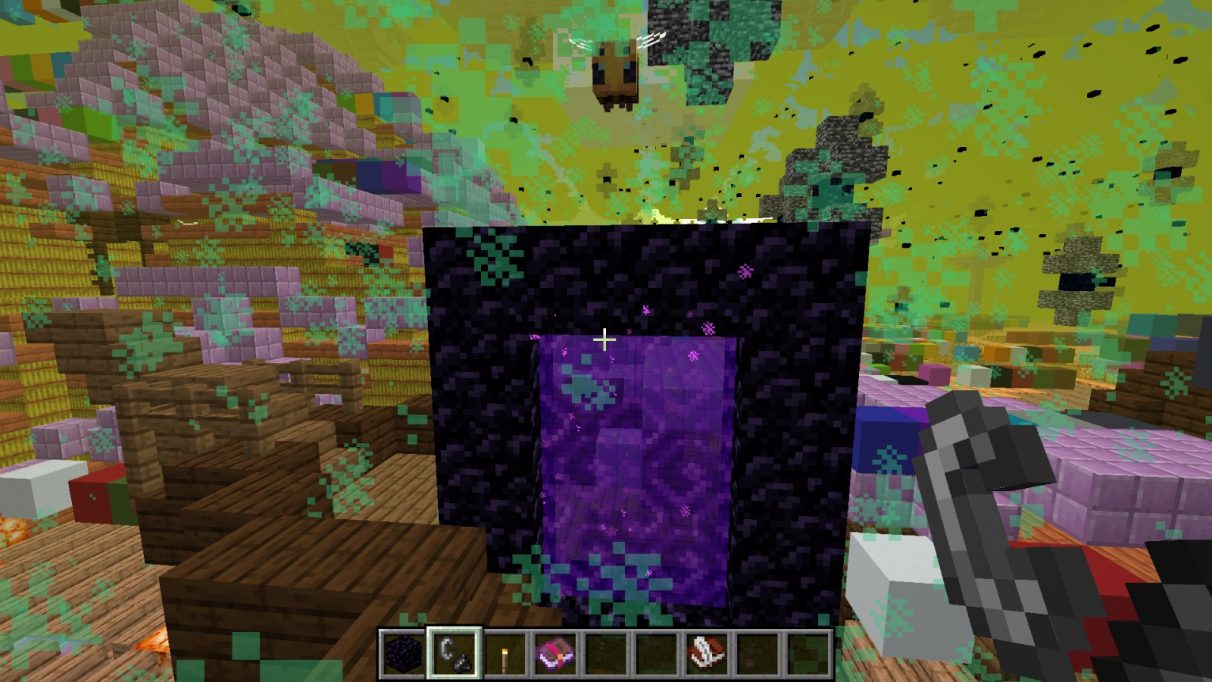 Knowing that Mojang had hardcoded several easter egg dimensions into the otherwise random generation procedure for this update, I felt sure that “Chronicles Of Riddick” would unlock one of them. After all, who wouldn’t want to visit the exciting Space Opera world of Richard B Riddick? And indeed, I was in luck: I materialised inside a half-sunken pirate ship, beached on an expanse of hay, purple bricks, and multicoloured concrete, and was immediately greeted by a bee. Just as happens to Vin Diesel in the film Chronicles Of Riddick. Roleplaying the film, I took to the sky (I know the bee takes Riddick to space in a biplane, but one has to work with the resources available), and found that above the hectic valleys carpeting this world, the air was packed with perfect rows of silent purple galleons. Splendid. As Riddick himself liked to say when he saw something that moved him, “ease up buster, or I’ll tear off your hand and shit down your wrist”. 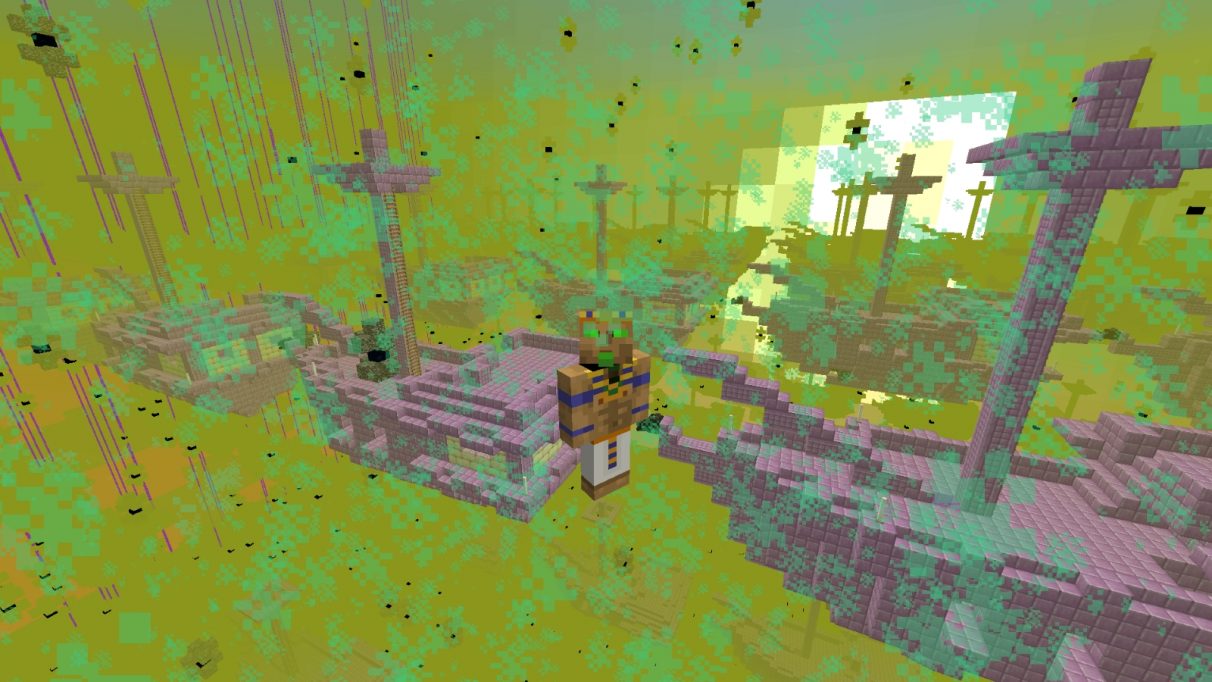 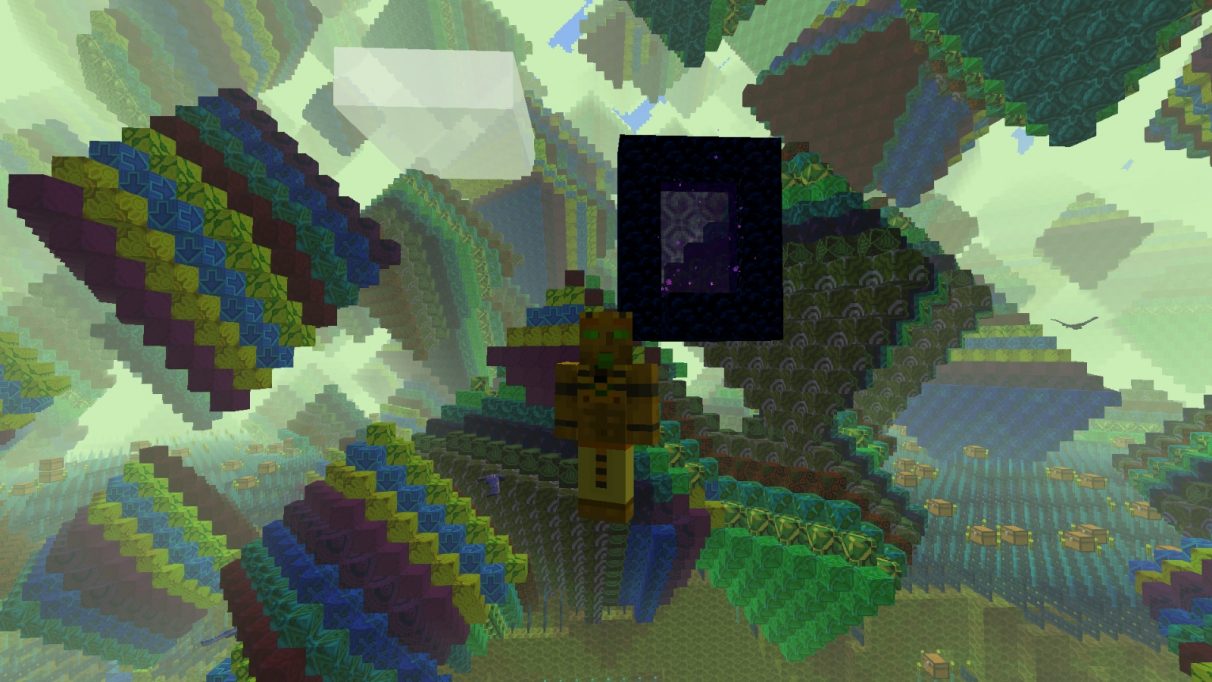 For my fifth and final journey into the impossible, I decided to take my cue from the RPS Podcast and its legendary catchphrase “hashtag FatBlood”. And goodness me, it did not disappoint. In an elegant metaphor for the podcast itself, the world of #FatBlood was a chill hyperscape of rainbow-hued octahedrons, with screeching devils soaring between them amidst a pastel-green mist. A grove of blue wooden fences bore treasure chests as fruit, containing an embarrassment of trivial wealth: stone picks, wooden logs, and pile after pile of delicious red salmon. This felt like the sort of place a simple man like me could settle down in, so I tore down the portal behind me and brought an end to my journey. I was home at last.