Blightbound is a three-player 2D action RPG about… well it has a plot, but come on. It’s about tearing up some monsters and taking their stuff. And it does that pretty well.

The world is blighted by the dying gasp of an apocalyptic monster, and you set out as part of a team of three to fix it by stabbing everything. Rather than a linear campaign, you run at dungeons in a 2.5D style, exploring each small network of interconnected screens and treasure rooms. As you gather resources and rescue NPCs, your base camp will be upgraded with more features, letting you buy and sell weapons, order custom gear, recruit new characters, and unlock new areas. It’s all very typical, on the face of it, but there’s enough charm coursing through its veins to help it punch above its weight. 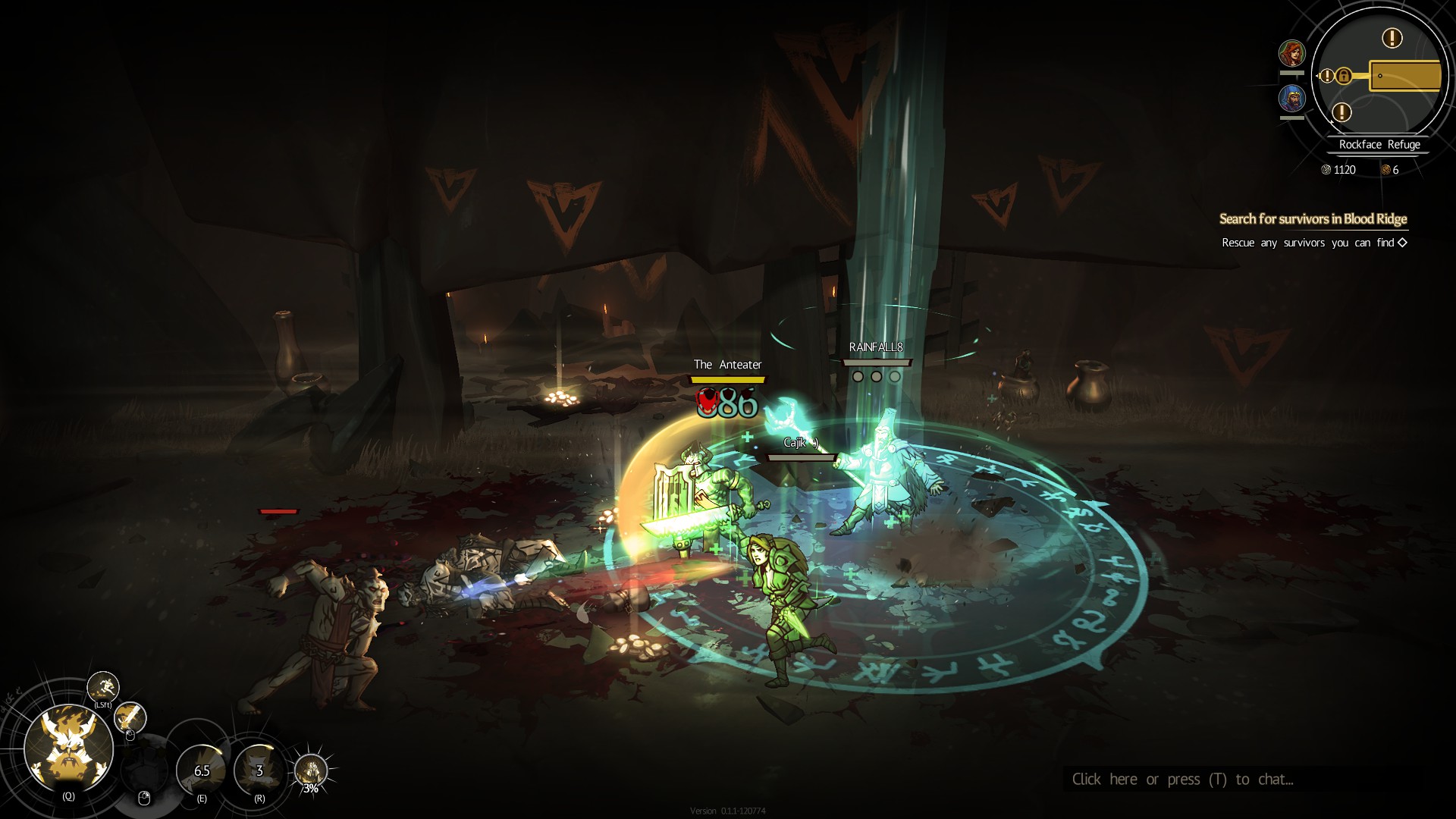 The vaguery of matchmaking meant I never really got to grips with the mage. Would have died dozens more times without them, though.

The key thing it’s doing is enforcing class roles, so there’s always a warrior, assassin, and nerd in play. You can unlock more of each kind through regular play and hiring them with in-game gold – so if you find the starting warrior too defence-focused, for example, there’s another who’s still a heavy shield user, but builds up attack power by blocking, so can dish out more damage.

The classes are well balanced and offer distinct playstyles, with the warrior primarily meant for shielding everyone, the mage for long ranged attacks, some area damage and a crucial healing spell, and the assassin (probably the trickiest) built around interrupting attacks and doing massive critical damage with backstabs. Each can unleash some heavy damage with a recharging ultimate attack like the assassin’s whirling blades, or when the warrior blows up (I mean like, gets big), and more regularly topped up special moves allow damage and some team-aiding boosts. 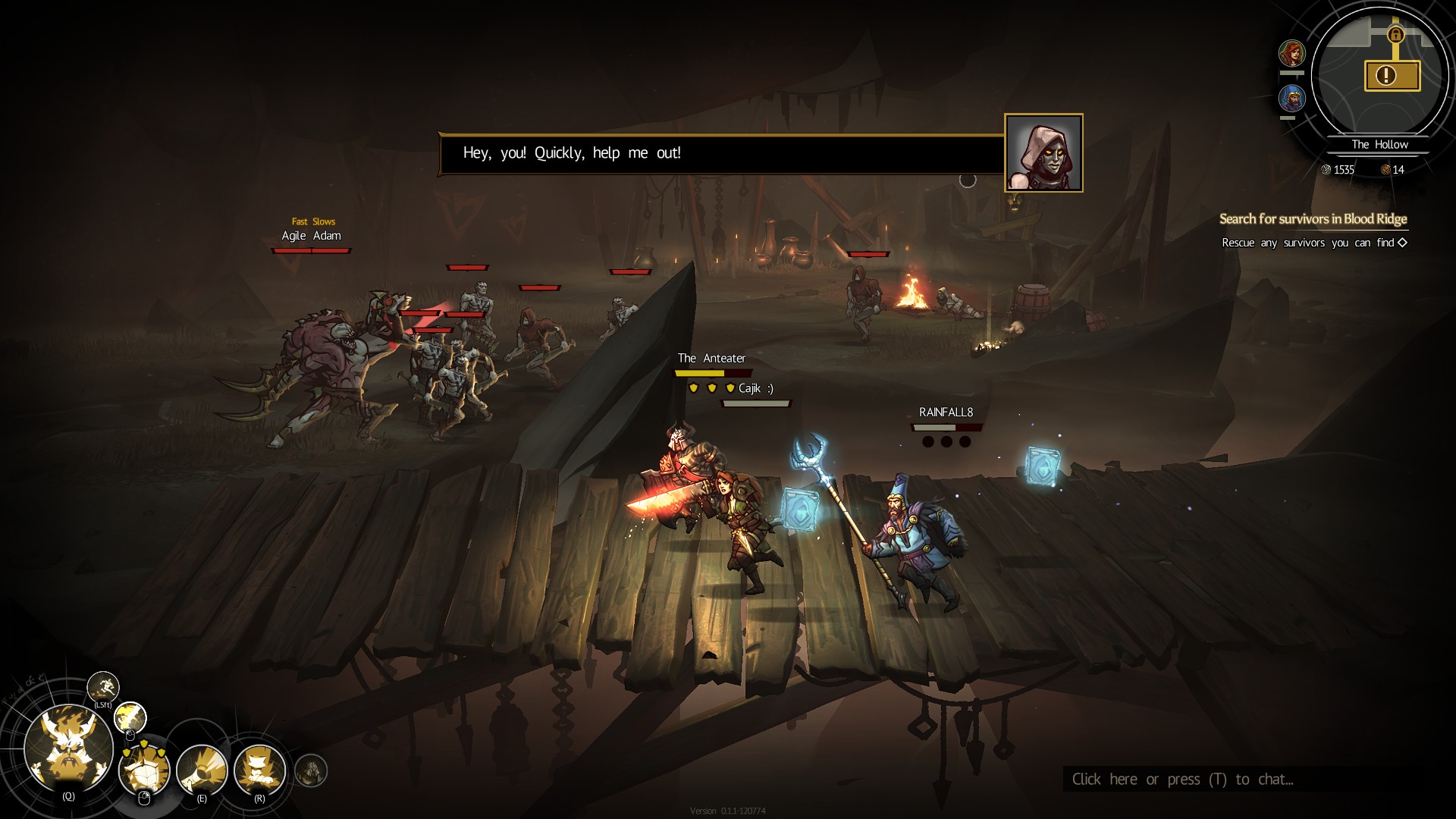 This level ends with backup from the mooks you’ve rescued. It’s a cute detail.

The fighting is fun, if a bit messy during the bigger fights. Spamming attacks generally works, especially as the mage, but timing is important, and may be decisive during harder levels where everyone but the warrior can go down pretty fast. There’s not, in truth, a lot I can say about the fighting beyond that it’s entertaining enough to put down monsters, and playing to your class is rewarded, but not to the degree that you’ll feel pressure from other players. It feels natural to wade in and hold the line as the warrior, periodically switching to all out attack for a big fight. Every mage I’ve played with did well too, consistently blatting from range but moving in for a crucial heal when needed, and the arenas are small enough that you have to stick together anyway, making teamwork almost automatic.

Those arenas look nice enough, but they’re a bit limited at present. Even after unlocking more, they could use more variety, although developers Ronimo say they’ll be adding more levels, items, bosses, and lots more heroes to play as during its early access period. I’d say that it’s absolutely fine at the moment, damning it with faint praise. But it’s more than that: it has personality. There’s refreshing a spark of life to Blightbound. Right from the brief introductory video, it establishes a tone that I can only compare to a 90s action cartoon. It’s not too serious or overblown, but it’s sincere. Nor is it wacky, satirical, or overly ironic. 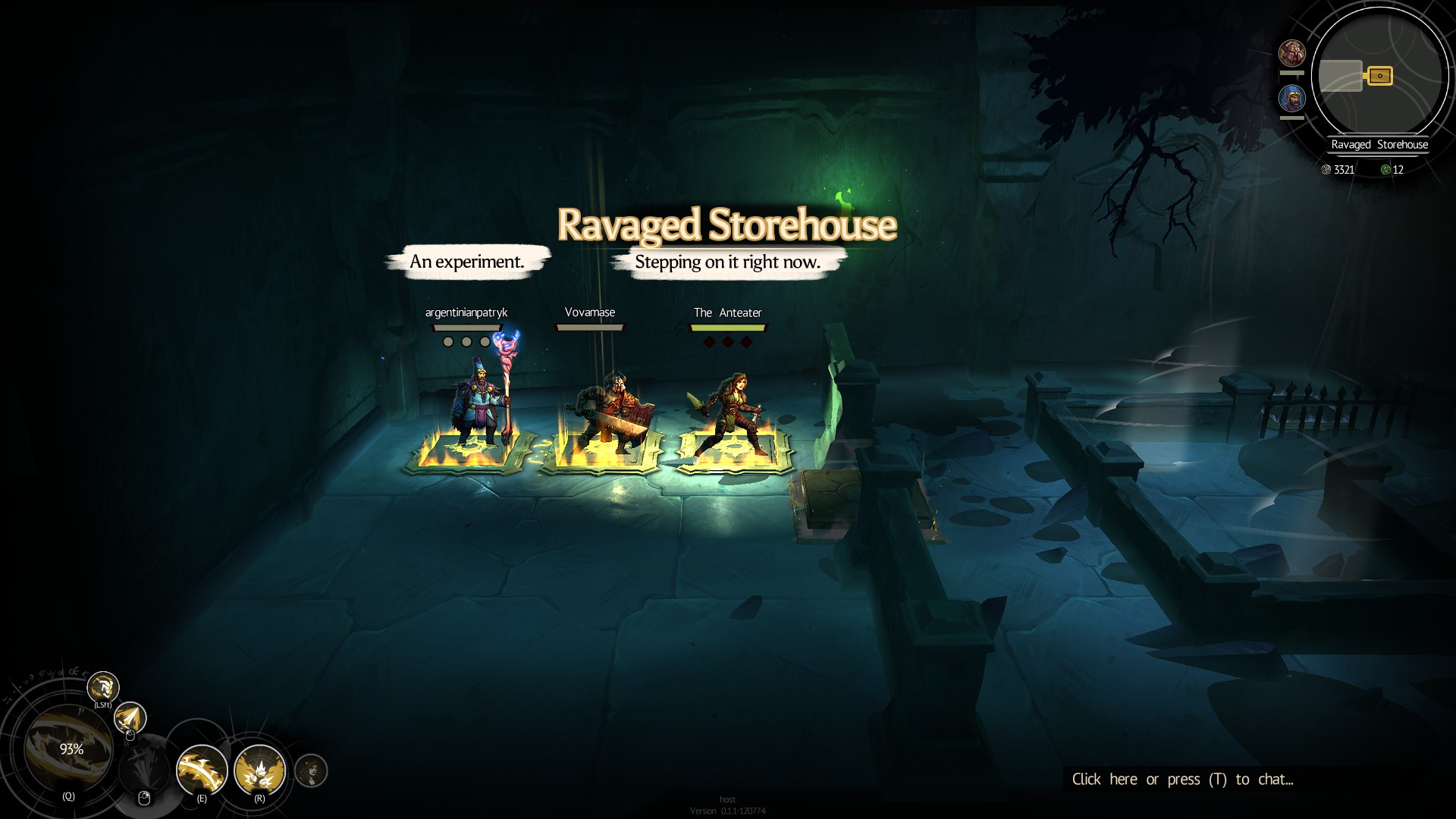 It’s a word that as a critic I should be wary of, but screw it: fun. I’m having fun. It’s aware that you’re here to delve into dungeons to cut up monsters, so makes that work a bit gory and dark. There are ill-lit tombs, cursed lands, and blightbeats getting cut in half all over the place. Your warrior types shelter on a mountaintop, crusading downhill to thin out the enemies and gather resources to rebuild some kind of society. The items you gather are in the Diablo vein, with skeleton jaws adding critical hit chance, rings of power, gnarly toothed blades and leather kecks.

But it never takes that seriously enough to forget how silly the whole thing innately is. And instead of mocking the concept or pushing it too far and being smug about it, it goes for a slight cheesiness instead. There’s a jingoistic fervour to the characters, with skilled voice actors carrying a lot of enthusiasm (“My parents took me into the Blight at six, barely able to lift a dagger. Now I am mighty! I can lift many daggers now” doesn’t look that funny on paper, but the delivery caught me off guard). The art is bright and attractive even though the monsters include gross alien slug things and possibly undead twin sorcerer things with tentacle legs. 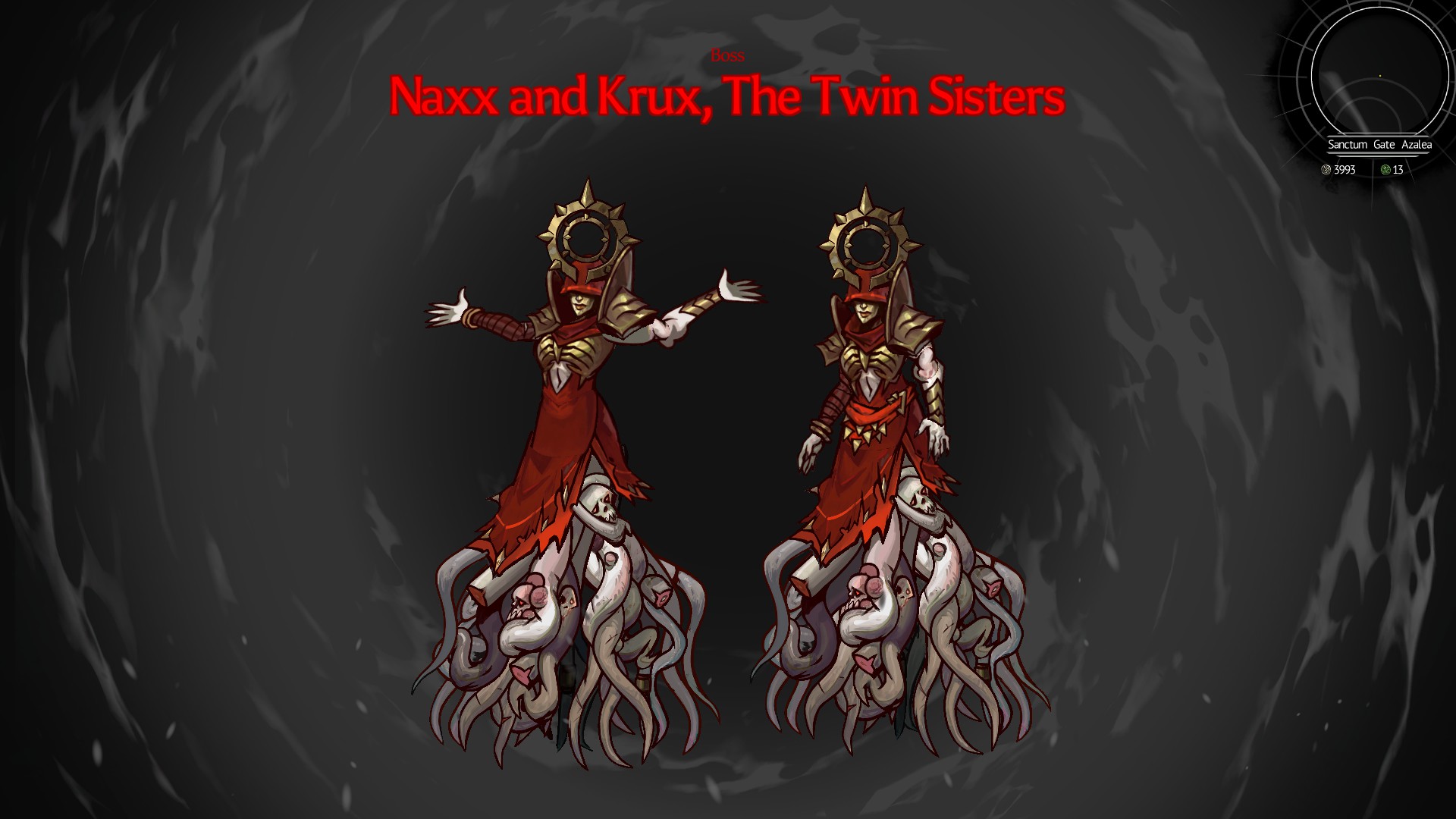 What I’m less sure of is its interface. The fights are fine, although it could use a tweak or two to the chat interface, and perhaps a few basic voice bark shortcuts. But the base menu bits are confusing enough that after several hours of play I’m still not sure how to actually select which character I want to use. It appears to choose for you sometimes. And similarly, information like how blighted characters are isn’t readily available, and although you’re told what weapons and stat increases do (and in a nice touch, each character reponds with multiple voice clips depending on which of their statistics you raise), there’s no detailed statistics screen to tell you what they’re adding to.

More frustrating is the matchmaking. When you’re ready for a game you need only click on the “play”/”ready” button, and two players will be thrown in with you. But I’ve yet to have a game start smoothly. One fell prey to a disconnection, instantly failing the mission (not a disaster, as you still get some items), and the rest of the time, a party would be formed but then unform itself a few moments later without explanation, over and over. Often with the same three players, and resetting our ‘ready’ status so we all had to keep waiting around to click the button again and hope for the best.

I was able to play consistently, so again, these issues aren’t disastrous. And the tiny three-person teams are the ideal (and you can add your own friends manually, if you’re too weak to exist in glorious solitude) size to kick things off quickly even with randoms. You’re also rewarded for playing multiple times with the same others, even strangers, which is a really nice touch for fostering those fleeting micro-friendships you sometimes get in games. I’m just a little uncomfortable with how it works at present, and at the absence of any single player mode. 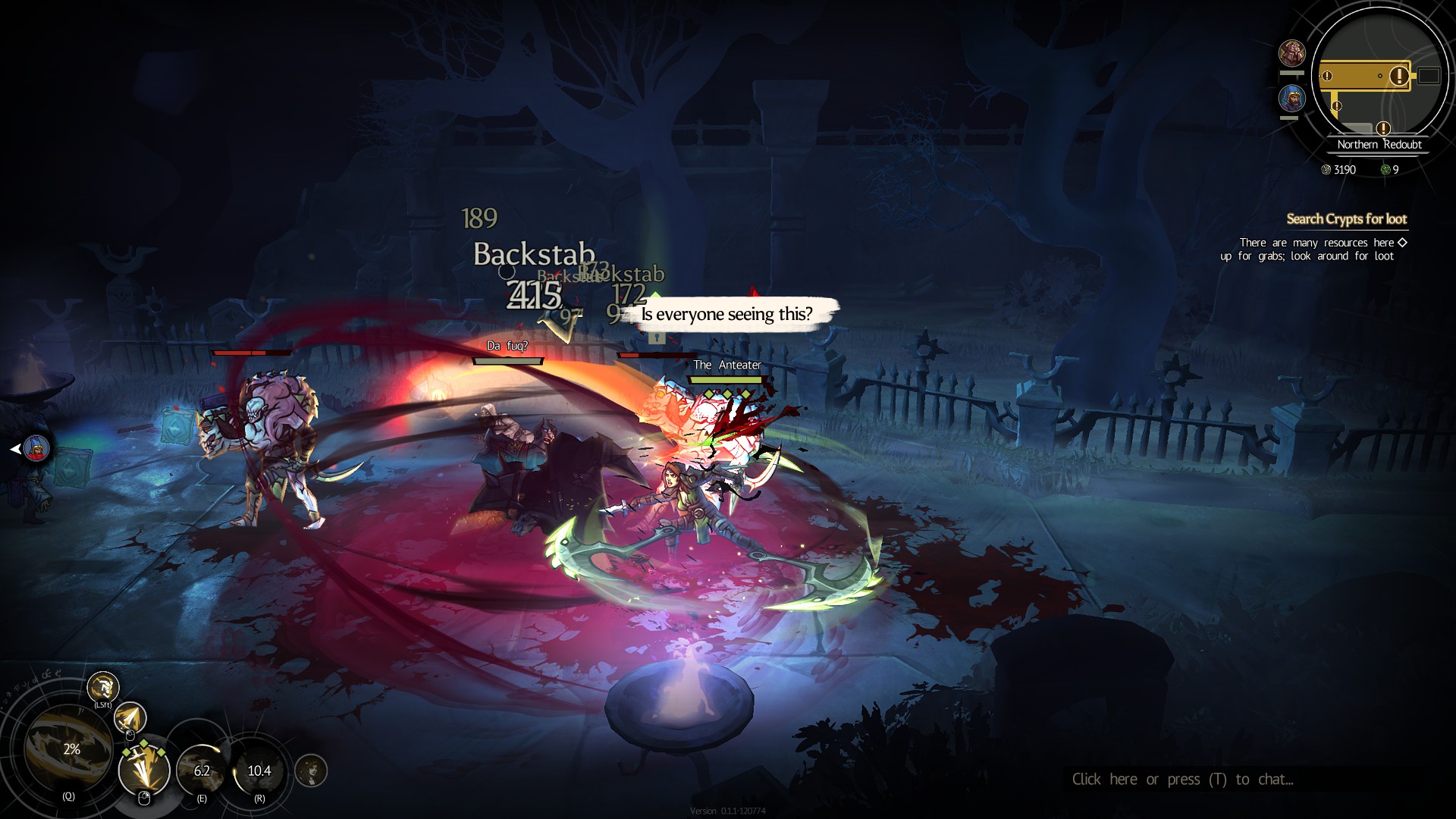 Assassins are fragile and trickier to play well, but their power attacks really pile on the damage.

I’m probably being unfair to harp on about these issues so much. Blightbound still has an estimated year in early access, and its blend of aRPG stab and grab looting with shorter rounds and a cheerful heart makes for a great snack when you want something with a little substance, without demanding too much investment.