Since time was exposed as a capitalist scam, I have less problem accepting that Bugsnax first revealed itself two months ago. The surreal action adventure about fuzzy muppety creatures eating and then becoming walking strawberries now has a more revealing trailer. It looks more approachable but still pretty weird.

“You’re pretty good at stuff, and nobody hates you yet” is also how I got this job. I’m not entirely sure what to make of Bugsnax to be honest. Like Alice B, many were equally charmed and bemused by its original trailer back in June, with its cheerful talking fuzzy creatures having their body parts warped into the food they ate somehow being nowhere near as sinister as it sounds. It’s still not fully clear how it plays, but the new trailer suggests a first-person puzzle game about capturing and herding the 100 species of edible snack creatures who call the island home.

You’re a photojournalist chasing a story about this strange place, and according to its official website, you’ll get to “explore the diverse biomes of Snaktooth Island to track down and reunite the inhabitants of Snaxburg”. There’s a central mystery about the nature of the place and why things have gone a bit wrong, and it looks like there’ll be at least a somewhat open world and, judging by parts of the trailer, a settlement you build up over the course of the game. “Stuff your new friends with Bugsnax to customize them with countless new looks” is where it starts to sound dark, and hint at something a bit less cute than the cheerful characters suggest. If you even form the question “is this someone’s fetish?”, the answer is probably yes.

If Bugsnax isn’t super weird to play people will probably be a little disappointed, but such is the curse of oddball concept games. Developers Young Horses were behind the Octodad games though, so they have experience of taking odd ideas and making comprehensible games that are still disarmingly bonkers.

It’s well worth looking at its homepage too purely to see this… entity in motion. 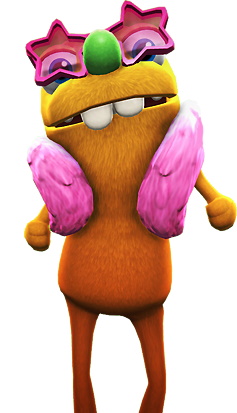 Bugsnax will be out on PC, Mac and Playstations 4 and 5 in “Holiday 2020”, which Imogen has translated into human for me: It means “December”. We don’t yet have a price, but you can keep an eye on its Epic Games Store page.

[For those interested in Tim’s current feelings about Bugsnax, he was very pleased with this new trailer because he believes it is taunting me, specifically, “for not taking Bugsnax seriously enough as a games journalist” and that the player character is “a REAL journalist with the stones to follow the Bugsnax mystery all the way to the top.” He also wants me to buy the website bugsnaxnews.com with him. – Alice Bee]

The Bugsnax trailer is all questions and no answers

It was too much for my friend Tim