The Sims 4 has always kind of been The Truman Show as god game, hasn’t it? You make your little puppet people, you control every aspect of their lives and personality from birth until death, you make them get in the pool and then remove the ladder. I am become Ed Harris, destroyer of worlds, right? And now, thanks to an incredible build creation shared by Sims community member “Simoniona“, your Sims game can be The Truman Show both metaphorically and literally.

She’s created a version of Truman’s neighbourhood from the movie, so your Sims, too, can wish their neighbours good afternoon, good evening and good night. And, even more impressively, there are two versions of it. One is the street from, as it were, Truman’s point of view at the start of the movie – a suburban paradise. The second is when the scales have fallen from his eyes. The lot is bordered with big movie set surrounds, a light has crashed onto the set, and we even have the iconic steps and door for your tiny Trumans to make their own escape.

This is a mammoth 64×64 lot, but it uses only base game content with no custom content or mods necessary – though I will say that it uses bits and pieces from pretty much every single expansion, DLC and stuff pack. But you can’t argue with results, and the results are impressive. Here are some snaps from Simoniona. 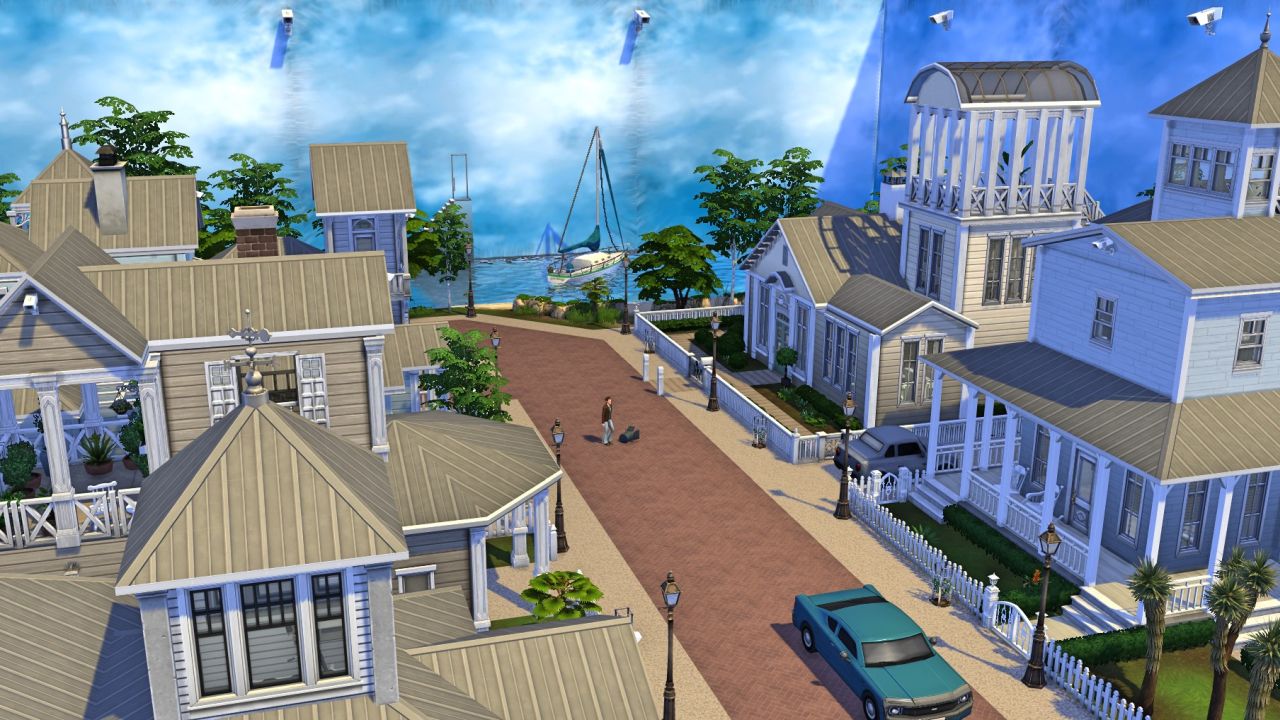 I have to say, this Truman Show build is especially worth a look. The attention to detail is brilliant, even including Truman’s little basement nest. The kitchen even has a little clutter pot that resembles the Mococoa hot chocolate tub that gets advertised on The Truman Show in The Truman Show as part of The Truman Show. You can download Seahaven version one and version two from the official Sims Gallery and plop ’em right into your game at your leisure.

(I am assuming the vast majority of you reading this have seen The Truman Show, by the way, but if you haven’t: it is a 90s drama/comedy starring Jim Carrey a man who comes to realise that his entire life was staged for a television show. Here is the trailer; you should go and watch the whole film.)

The Sims 4 community seems to be in beast mode at the moment. Perhaps it’s because of all the extra time we’re spending indoors, perhaps creators are spurred on by the creator challenges issued alongside strange Sims 4 reality show Spark’d. Whatever it is, I am enjoying the new builds and CC that’re getting pumped out. My favourite CC maker, Ravasheen, has done loads of fun new clutter that fits in with the Nifty Knitting stuff pack. I am in craft heaven (and if you’re a big fan of custom content, check out our round up of the best Sims 4 CC for more).