As we all know at this point, I am a big fan of the ants in Obsidian’s new early access survival game Grounded. But the ants aren’t the only thing I ask about when I interview Obsidian’s Adam Brennecke, the game’s lead designer.

In Grounded you play as a child, or group of children working together, who has been mysteriously shrunk down so that a normal suburban garden becomes a huge jungle. It’s a great idea, but I’m curious where Grounded came from conceptually. Did they set out to make a survival game that eventually became about being tiny and encountering giant ants and spiders, or was there a particular idea or concept that came before that? It turns out it’s the former. 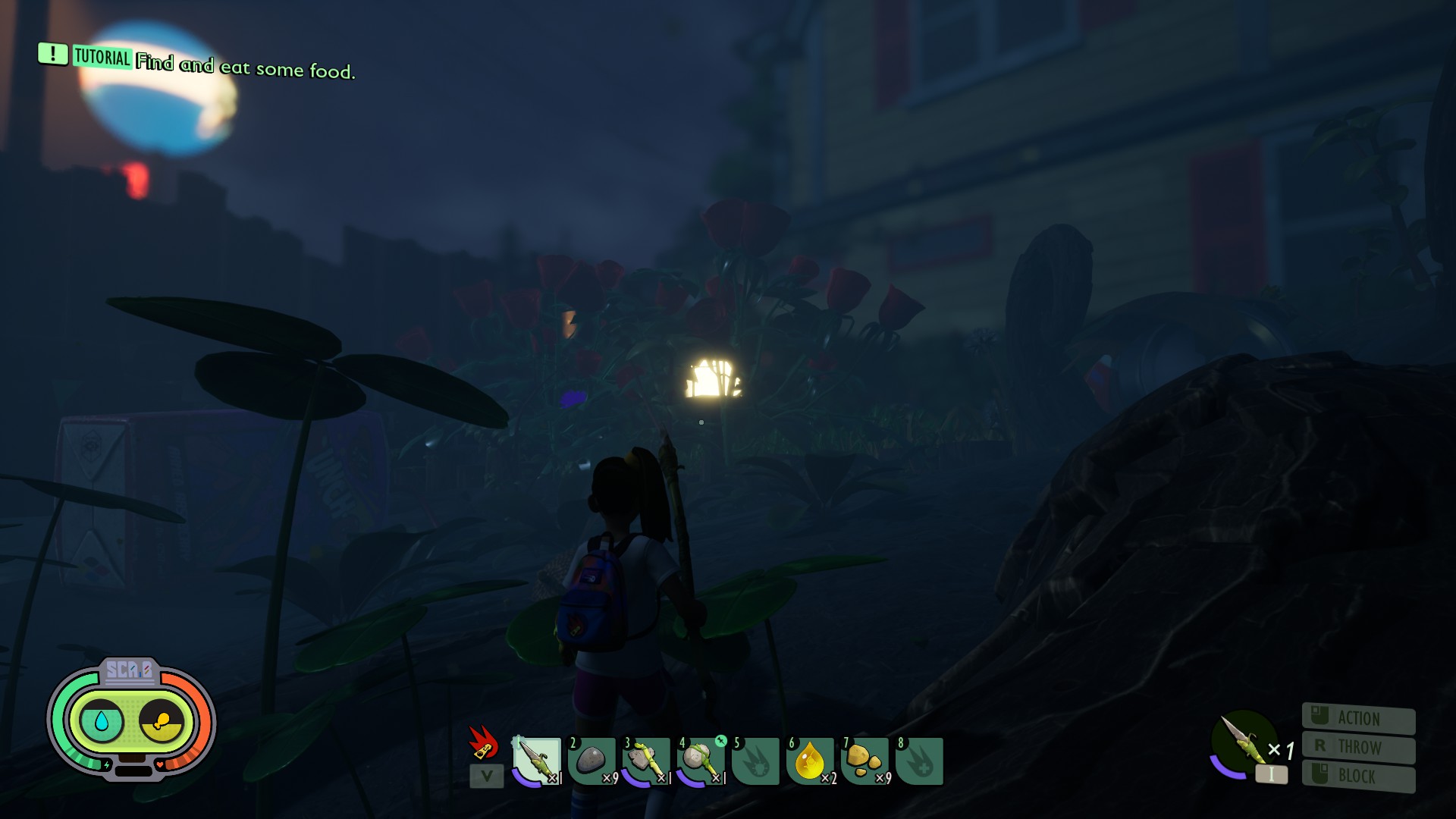 Stills don’t convey the atmosphere, but it really is lovely.

Although Grounded has had some technical trouble, it’s off to a very strong start. It’s consistently in the Steam top ten, and Brennecke reports that it definitely outperformed the studio’s expectations, and they’re “blessed” to have such an overwhelmingly positive reception. A few patches aside, the team have been busy working on the next of the planned monthly updates, the first of which released on Wednesday, bringing birds to the garden and a perk system to the design.

While Obsidian were working on Pillars Of Eternity, they were playing other things and noticed the survival genre blossoming. There’s a lot of cool stuff here, they thought, and while they might not be RPGs (Obsidian’s speciality), there are a lot of similar elements, and room to inhabit the world and make your own story. Brennecke particularly likes games where you can make your own path, he says.

There were some efforts to get their own one off the ground, and after Deadfire shipped, Feargus Urquhart, Obsidian’s CEO and former leader of Black Isle Studios, encouraged Brennecke to assemble a team, draw up a pitch and see where it went.

Obsidian are best known for traditional RPGs, be they fantasy like PoE or sci fi like New Vegas and The Outer Worlds, so Grounded is a little out of their wheelhouse. That was a new challenge, met by basically locking themselves in the office and asking “if we were gonna do a survival game, what would it be?”. Ideas were thrown at the wall until someone suggested “what if you were shrunk in the back yard?”. It’s a kind of ridiculous idea, but once it came out, the details and possibilities just kept coming. 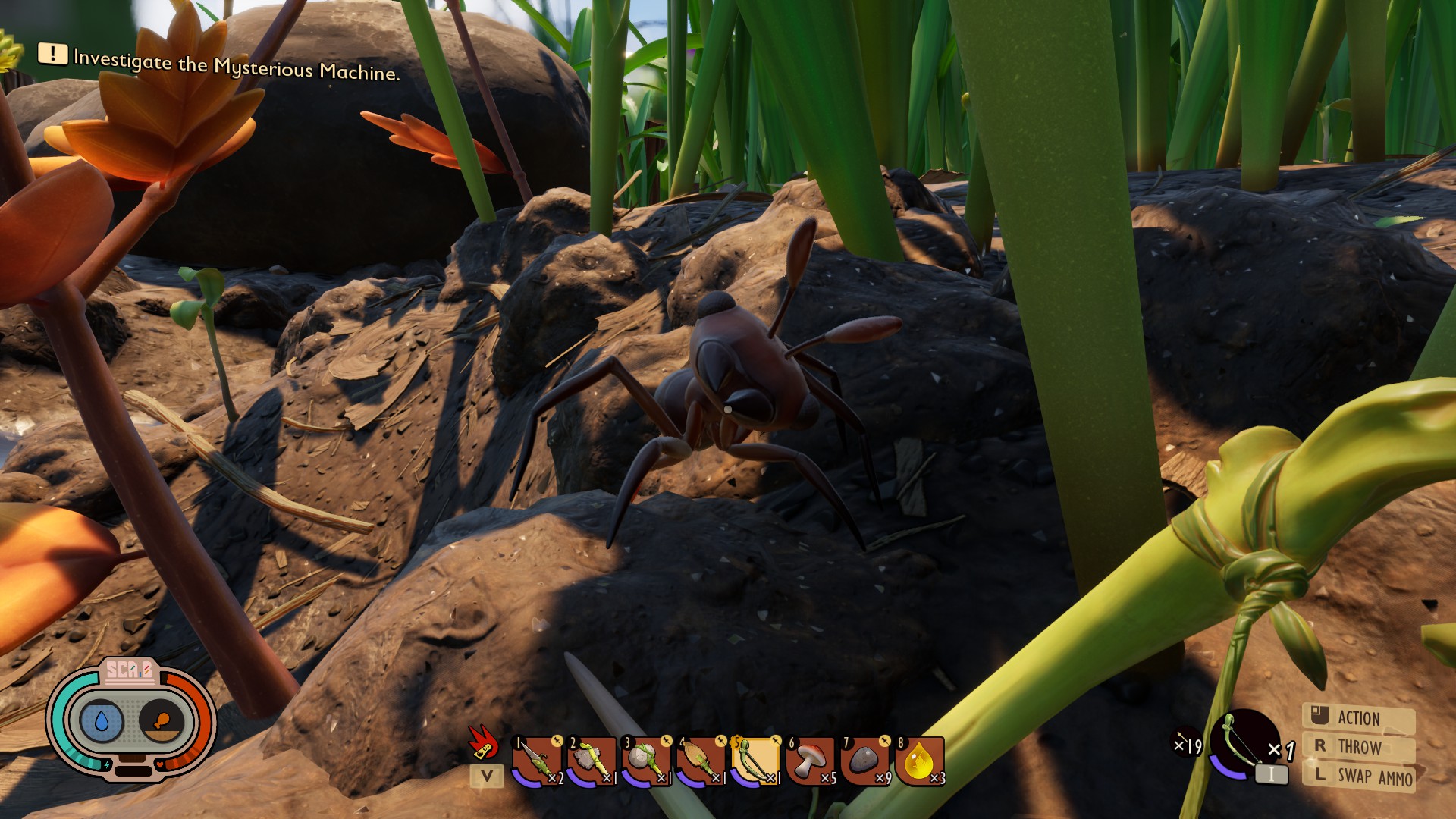 I’m a little disappointed to learn that the whole thing wasn’t driven by one person on the team who was like me, that slightly odd kid who was fascinated by bugs. Brennecke laughs, but insists there’s a bit of that odd kid in the whole team. And Grounded as a whole carries a lot of nostalgia, it reawakens that feeling of being a kid again and playing in the park or back yard. “Getting into the dirt and playing with your toys” is a feeling they were actively going for.

As noted in the ant-centric part of our interview, the wildlife is a big part of this. Insects and spiders you encounter behave how you’d expect them to behave, not necessarily exactly how they behave in real life. It creates a world where you can, and want to, explore.

I’m wary of falling into the whole “realism vs fun” false dichotomy, but it seems like a balancing act when it comes to depicting super-realistic behaviour vs. what makes the game work. If I were feeling pedantic I could criticise them for being very unrealistic, but a real aphid would be boring and inert, and just sit there while a ladybird ate it. But in Grounded, they march around the ground, and cheep and leap up in the air in a panic when they see you before running away. I’m guessing that’s a deliberate cue to say “maybe you should chase this”, but how do you make those decisions? 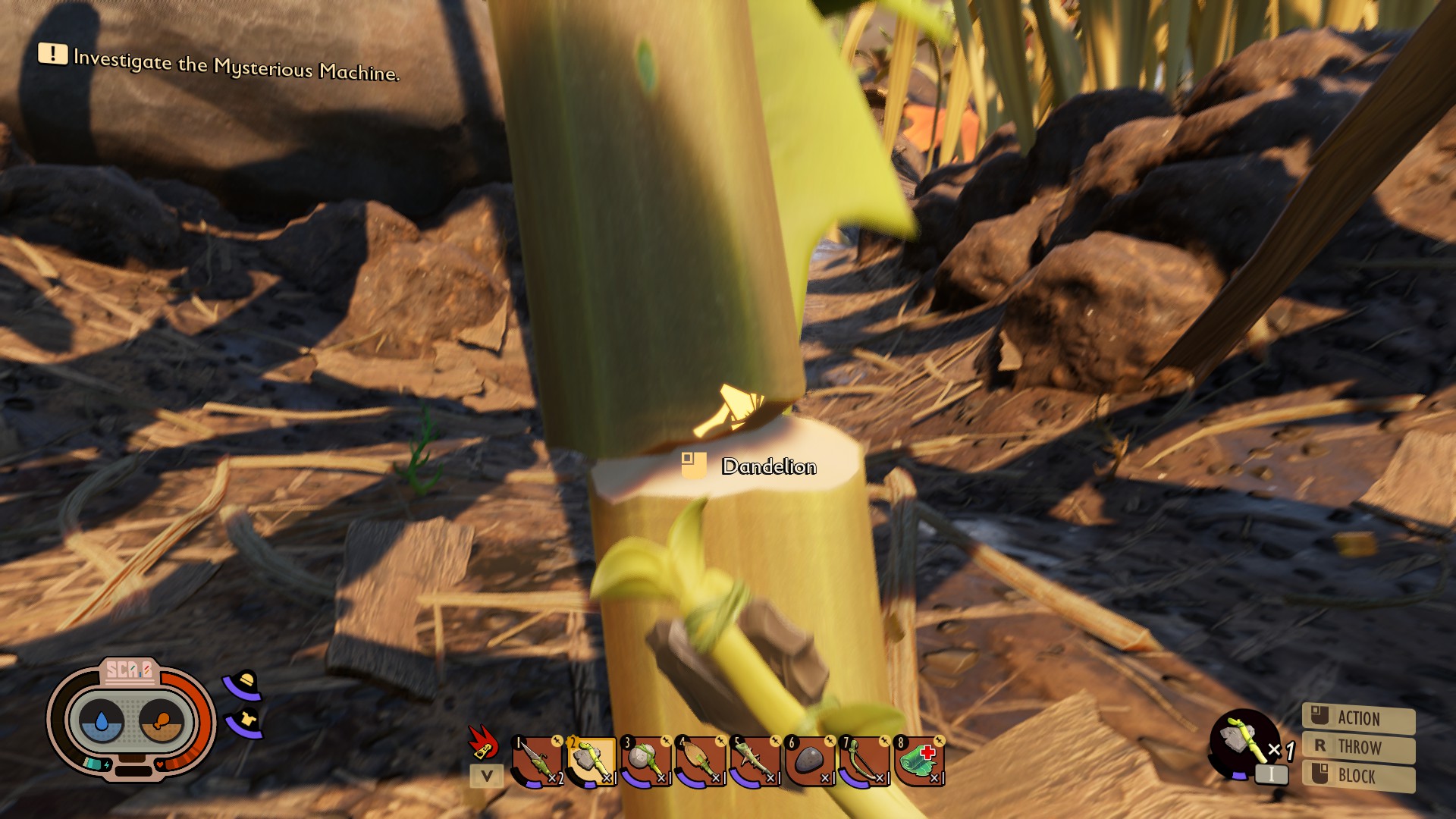 The tactility of the plants you can chop is underrated. Even felling a dandelion feels fresh.

Brennecke notes that these decisions are part of making a game in general, but looking at a survival game specifically, practical questions were often the driver. You need a food source for the player, so what could it be? There’s static food in the mushrooms, and a more dynamic food source in certain insects, but they wanted to make the aphids a bit more fun, and harder to catch, because they’re a better food source than the mushrooms.

It connects to other systems too: “[The creatures’] ability to scatter and run pushes you into exploring. Maybe that aphid will lead you to something unexpected. And we wanted the aphids to hide by running up the grass, which gets the player to look up and notice the dewdrops. Those kind of unscripted pieces choreograph some of the early game, to breadcrumb the player into the world.”

They’ve already experimented with flying insects, which will add another layer to base building and defence, and we know bees and mosquitoes are coming (though probably not this month). Even a simple creature like the gnats (already in the game) have their own secret habits – they search for water, and they’re attracted to the player at different times depending on what you’re doing. Basically if you imagine what real gnats are like, they’re sort of the same, but the size of your head. Harmless, and kind of cute, but annoying too. Brennecke appears to enjoy noting that they like to bump the player a little when up high. 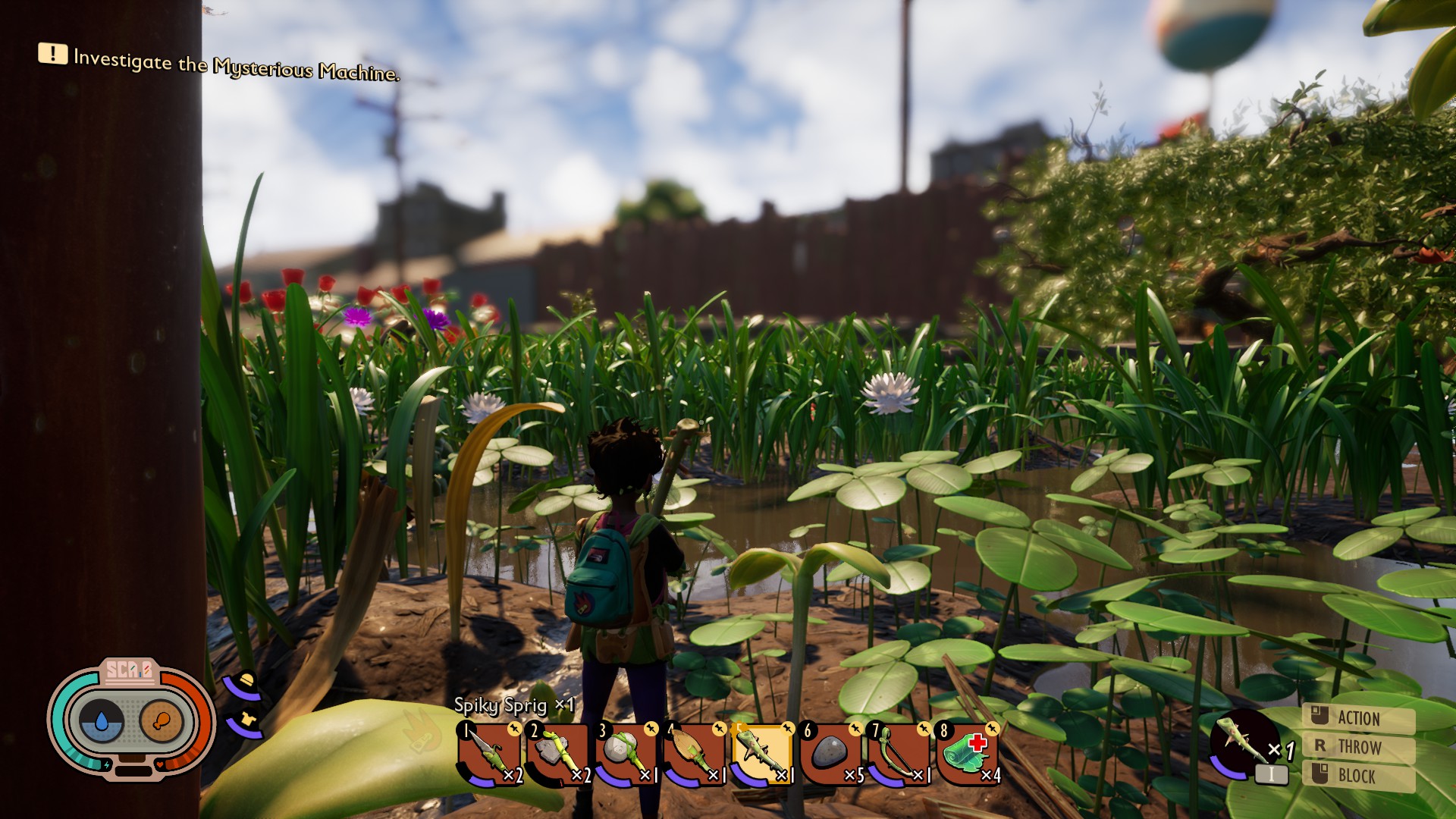 A pretty pond, surely full of terror and death. I take few chances in Grounded.

While we’re talking about the upper layer, I ask if there are plans to add an overt human presence. Perhaps not adding them to the immediate environment, but even just the distant outline, or shadow of a human looming over you, could make for dramatic moments. Brennecke replies, coyly, “we’ve got some ideas.” The question of humans hasn’t been answered yet, but they definitely want some larger things in the yard at some poinnt.

It’s a potent setting for sure, and that enticing mixture of the familiar seen from a fantastic, unfamiliar perspective stood out when I watched other people go through the same early-game wonder in co-op. It’s hard to avoid the word “wonder” when watching people play it for the first time, and Brennecke said that was present right away, even from the team’s early prototypes. Once the perspective was in, and the sense of scale, it was clear there was something really cool here, and it would get stronger the more they jammed on it.

“I think that’s the power of this fantasy,” Brennecke opines. “Anyone can see themselves in this yard. You can imagine, because we’re all familiar with all these elements, what could be possible.”

Grounded is out now in early access via Steam or as part of Xbox Game Pass.