High Chieftain Andyamo doesn’t ask for much in life. In fact, he wants only two things. To live forever, and to bang every giant in Christendom.

Crusader Kings 3, which comes out today, is a game where you very much get out what you put in. You get something, anyway. The sheer density and interconnection of the medieval RPG’s many simulations mean that, pretty much whatever you do, some consequence will come back to surprise you many years down the line. A butterfly flaps its wings; moments later, it is the pope.

This is great for improvisational storytelling, of course. You can go in with a clear set of rules to play by, and Crusader Kings 3 will act like a sort of magnificent dickhead of a game master: it throws unforeseen ramifications back at every decision you make, until eventually it’s more fun dealing with the mess you and the game have made together, than sticking with your original plan.

But it’s fun to have a plan. And after my review saw me eat my vegetables with a long, studious game as ye olde Holy Roman Empire, it’s now time for me to start on the endless dessert train of ridiculous gimmick playthroughs. And with the new dynasty perks system making it possible to tinker with your medieval family’s propensity for inheriting certain traits, I thought it would be fun to start a game focused entirely on getting as many members of a dynasty as possible to possess the “giant” characteristic.

And so enter good old High Chieftain “Randy” Andyamo. He’s the big man in a small world; a strip of land in Northeastern Estonia, squeezed in between lake Peipus and the Baltic sea, in the year 1066 AD. And while his domain ain’t much – he’s got a total of one vassal, who doesn’t respect him, plus two forts of his own and a scattering of farms – he’s got good prospects. He’s only 16, you see, and he’s a smart lad with a decent set of morals, and no horrendous diseases. There’s plenty of local chiefdoms he can raid, loads of chances to expand his ancestral holdings, and no aggressive empires breathing down his neck. Andyamo could do anything. 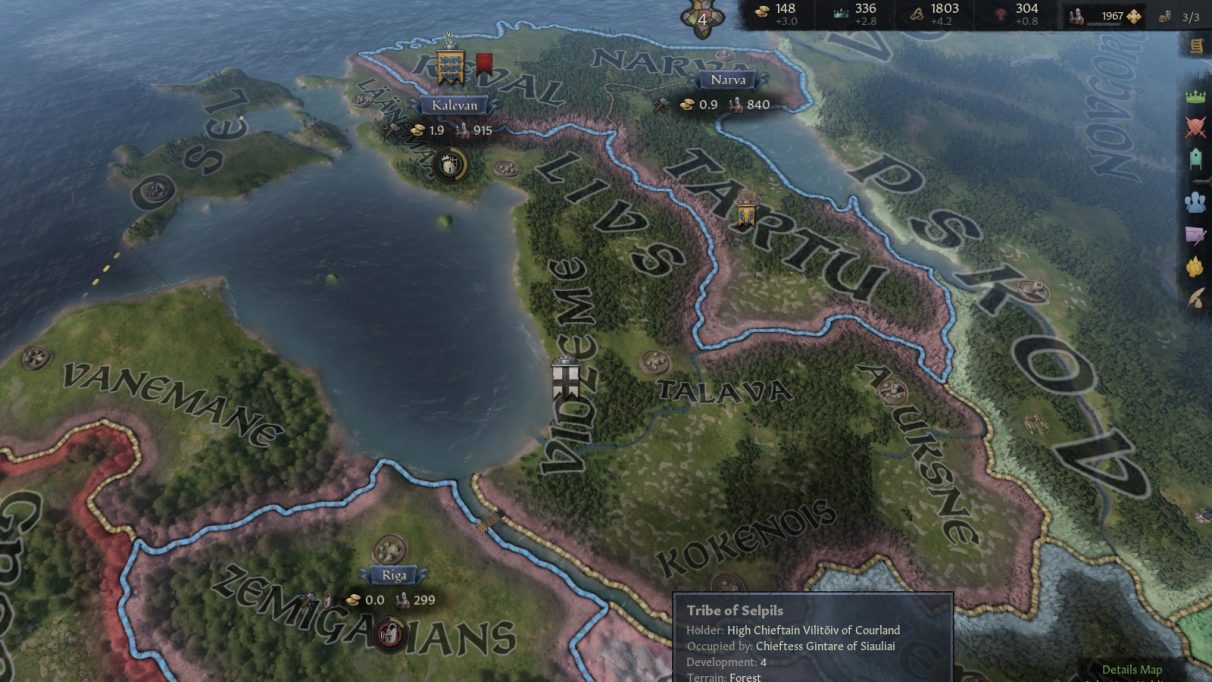 That’s it, that’s the realm.

But I decide he just wants to bang giants. He wants to find the very largest women in the known world, invite them to his frosty court, and shag his way mechanically through the lot. It is not a fetish thing, mind. Or at least, not entirely a fetish thing. Andyamo has an eye on the future. One day, he wants thousands of his vast descendants to look down at his seemingly postage-stamp-sized gravestone, and pay their respects. “Here lies Andyamo the giantbanger,” they will say, in their booming, lustrous voices. “He was much smaller than we are.”

To this end, every single action Andyamo takes contributes, in some way, to his life’s work. Every month he will scan a strange, sky-filling menu, where he will cast his gimlet eye over the list of every human woman known to the courts of Scandinavia and Northeastern Europe, and make a feverish note of the very largest among them. Then he will empty his kingdom’s coffers to woo them with gifts, promise them work as adventurers, or even spuriously hire them as court physicians. Anything to bring them to his mighty halls, and persuade them to permit him a brief, feverish bout of willying.

Andyamo is not a sentimental man. At one point, he invests a vast amount of money in bribes to Central Asian horsemen he has never met, so they will assassinate their khan, who he has also never met, because he lives thousands of medieval miles away. Why? ‘Cos his wife’s a giant. That’s it. That’s worth a man’s life, in Andyamo’s world. He feigns an interest in architecture to lure her to Estonia, where she joins his willing, yet slightly morose harem. 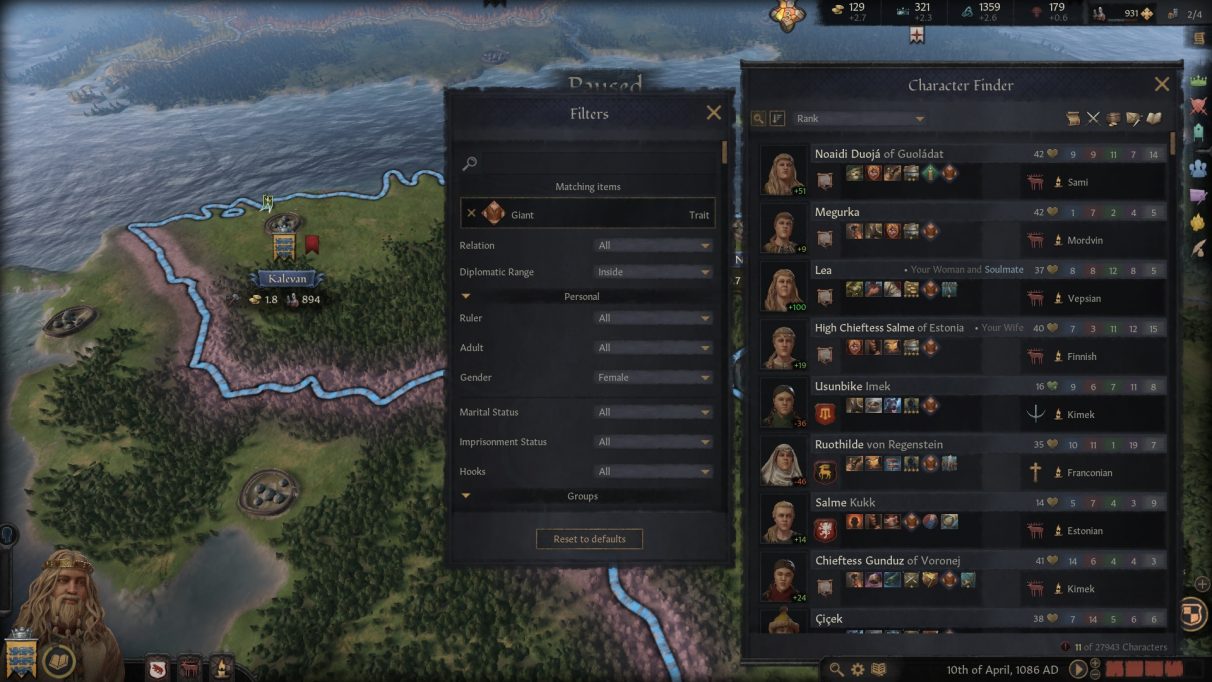 At one point, he spends two whole years, and an eye-watering sum, in order to court a french Countess who both despises him as a barbarian, and appears to have a personality slightly worse than the devil’s. She is also, however, eight feet tall; he must have her. It is rocky going at first. At one point, Andyamo is forced to murder a wolf in order to steer the romance away from collapse. But in the end, his perseverance pays off: the countess declares herself the High Chieftain’s soulmate, stricken with the purest form of High Romance, and they settle down into a rose-strewn bower to consummate their passion.

The second the High Chief finishes up, however, he rises with the relentless will of some kind of unlovable, priapic cyborg, and strides to his wooden medieval telephone, where he proceeds to start chatting up a Dutch Titaness over the Countess’ sobs. It’s not that he wishes her ill – he just can’t let anything stand in the way of The Mission.

Again and again, life tries to offer Andyamo a way out of his preoccupation. His lone vassal does begin to respect him, somehow. Indeed, she even tries to seduce him. But Andyamo has eyes only for his towering wife Lea, his three monolithic concubines, and his ever-expanding legion of secret lovers. Plus, y’know, the other fourteen or so giants he’s obsessively keeping track of via medieval LinkedIn. He builds new barracks and farms, but only when there are no giant-wooing opportunities. His kingdom will only ever be his bit on the side.

Indeed, even the High Chieftain’s lifestyle becomes a means to the end of getting his end away. Being a scholarly fellow by nature, he decides to devote himself to the study of medicine. Why? Because if he is to fill this corner of the world with colossi, he’s going to need to do a phenomenal amount of the old shageroonies, and he needs as many years as possible in which to do them. Clutching a stethoscope in one hand and a copy of gargantuan noblewomen quarterly in his other, the High Chieftain vows to extend his life to its very maximum extent. 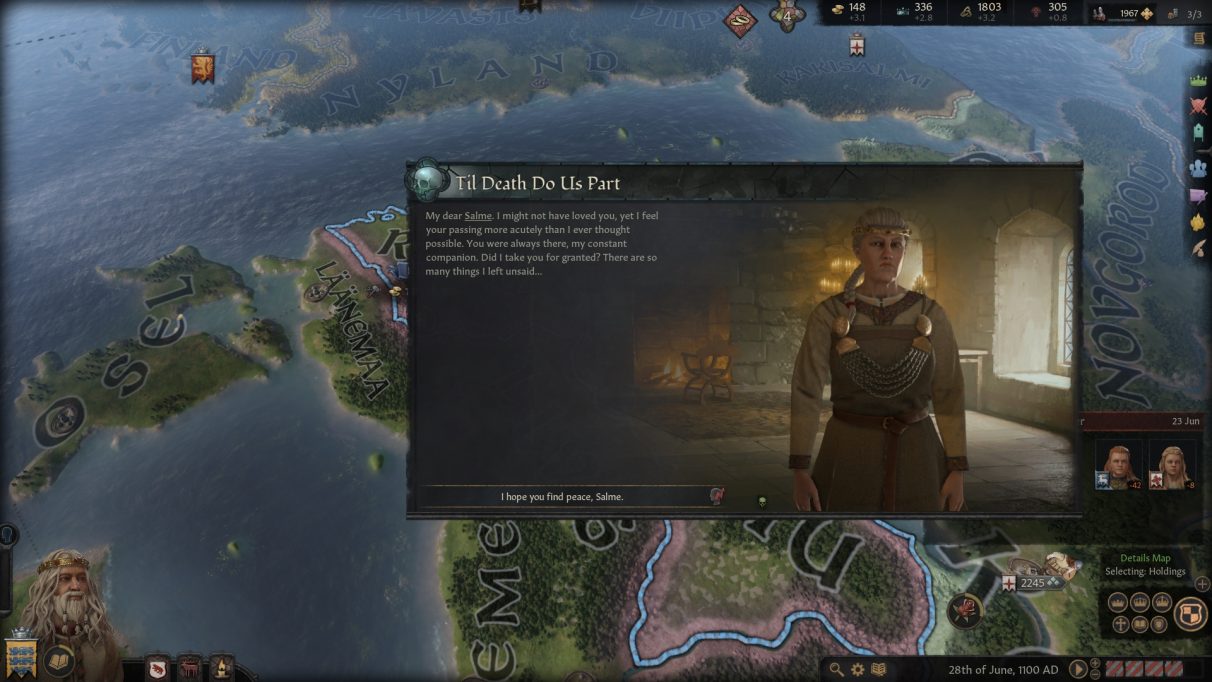 It is now the year 1127 AD. High Chieftain Andyamo has just died at the age of 77, as his heart finally gave out after six decades of frantic rogering. I suspect I know what he was doing when he passed. Succeeding him is his granddaughter Anni, for Andyamo outlived all 16 of his children, including Anni’s father, Beast Mode. As Beast Mode’s name suggests, the High Chieftain was a great believer in nominative determinism. But alas, he was one of his few ordinary-sized offspring, and Anni is similarly proportioned. The problems she faces, however, are not.

Around her, the Kingdom of Estonia (for her granddad did do a bit of conquering, in order to raise more giant-wooing money) is in chaos. Because Andyamo never gave two hoots about succession plans, or indeed anything beside copulating with very large women, the land has fractured into something like seven separate states, all intent on beating seven shades of shit out of each other. And because of the sheer number of king-sized kids the dynast inflicted on the local region, and the amount of children they too sired, often with their own kin, virtually every one of these new warlords is employing a small gang of murderous, inbred goliaths. The fields of Estonia, once so peaceful, are now nothing but crazed thunderdomes, echoing with the bellows of huge knights as they batter each others’ enormous bodies with swords.

There is no respite from the mayhem sown by her Grandfather even in Anni’s own hall. From the shadows, a sea of big, mournful eyes stare at her, as Andyamo’s battallion of now-wizened ex-lovers silently resent her existence. Anni despairs. She’s a marvellous entertainer and a superb mathematician, and had grown up with dreams of repairing the kingdom’s economy. But now she is on the throne, she realises her fate has already been written for her. With a leaden feeling of powerlessness against her grandfather’s will, Anni picks up her wooden medieval tablet device, and begins scrolling through Medieval Tinder, But For Giants. 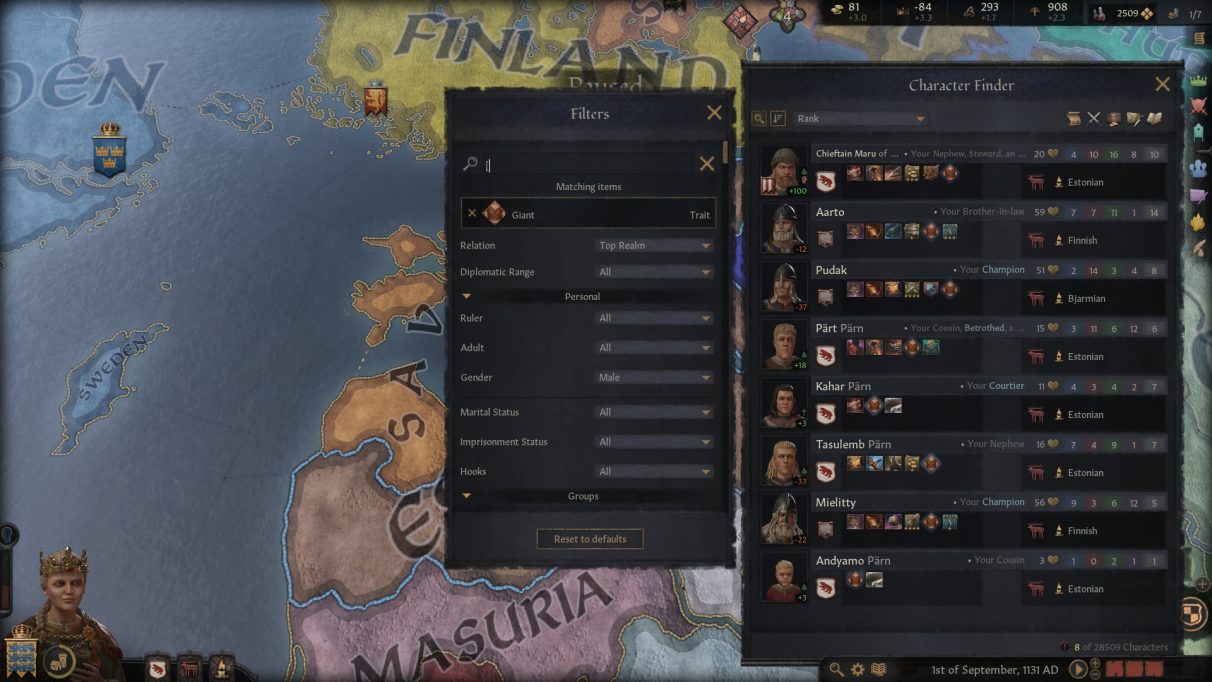 In a dark twist, almost every eligible giant in Estonia appears to be a blood relation of Anni’s. Ah well, that’s Crusader Kings!