Late last month, Asus announced that their first 360Hz gaming monitor, the ROG Swift PG259QN, was coming this September for £629 / $699, and now it’s going to be joined by a load more from Acer, Alienware and MSI. All of them are going to be full-fat G-Sync monitors, and they’re all going to employ next-gen IPS dual-driver panels from AU Optronics to help deliver the speed, low response time and high colour accuracy demanded by today’s gaming elite. Let’s take a look.

Starting with Asus, there will actually be two 360Hz models hitting shelves this year – the previously announced ROG Swift PG259QN, and the newly announced PG259QNR. The latter will come with support for Nvidia’s also freshly unveiled Reflex Latency Analyser tech, which measures and reduces your PC’s system latency in supported competitive games, making your mouse and keyboard inputs feel faster and more responsive.

Acer’s Predator X25, MSI’s Oculux NXG253R and Alienware’s AW2521H will also all be getting built-in Reflex Latency Analyser chips, but none of them have been priced just yet, nor do any of them have a firm release date other than ‘later this year’. Still, if the regular, Reflex-less ROG Swift monitor is already set to cost over 600 quid when it comes out later this month, you can probably bet that the rest of them are going to cost well in excess of that figure, making them some of the most expensive 1080p gaming monitors on the planet.

Is Nvidia Reflex going to be worth all that likely extra cash? Well, it’s probably going to depend very much on the types of games you like to play. At the moment, Fortnite, Valorant, and Apex Legends are due to get Reflex support in Nvidia’s next Game Ready Driver on September 17th, and Destiny 2, Call of Duty: Black Ops Cold War, Call of Duty: Modern Warfare – Warzone, Mordhau, Cuisine Royale, Enlisted and Kovaak 2.0 are all on the list to get it at a later date. It’s currently unclear whether any more games will follow in their footsteps, though, or how long it will take for the other announced games to get it.

You will also need a compatible mouse from Asus, Logitech, Razer or Steelseries to get the most out of it, too. Every 360Hz G-Sync monitor will come with a dedicated Reflex USB port, you see, which taps directly into the Latency Analyser’s measuring tools.

Nvidia say you can theoretically use any mouse (apart from Bluetooth ones) with their Reflex Latency tech to improve their PC and display latency (the former being the time it takes a frame to travel through your PC, while the latter is the time it takes for the display to present a new image after the GPU has finished rendering the frame), but you’ll need one of the aforementioned mice with specific Reflex compatibility “to measure peripheral latency and get full end-to-end system latency,” according to Nvidia’s GeForce blog post on the subject. At time of writing, no such peripherals have been announced, though, with Nvidia simply directing people to “keep an eye” on their respective websites and social media pages for more announcements.

Nvidia have also taken great pains to try and solidify the image of these 360Hz monitors with their fancy new Nvidia Ampere RTX 30 cards, too, although again, this is merely to get the best out of it rather than an actual requirement. In the same blog post, Nvidia state that Reflex will work on all GTX 900 series GPUs or higher, but you’ll naturally get the lowest latency speeds with an RTX 30 card. 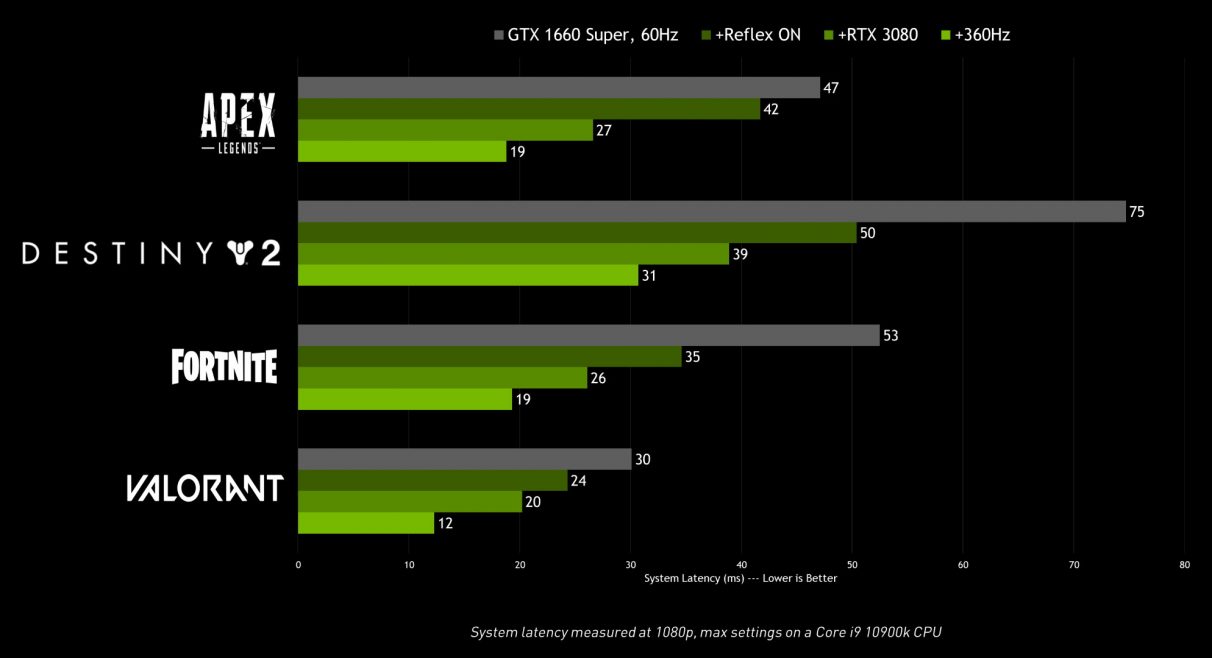 Nvidia’s Reflex performance graph is ambiguous at best, only showing the cumulative effect of adding Reflex, an RTX 3080 and 360Hz display to a game rather than separate them out into something vaguely useful.

Helpfully, the only graph Nvidia currently have that actually shows what kind of improvement Reflex might bring one of the games mentioned above (click to enlarge) doesn’t actually tell you how a 360Hz monitor will improve things on its own. Instead, Nvidia have added a + sign to each bar, signifying that you’ll only get those top 12-19ms latency times with the aid of an RTX 3080 card as opposed to the default GTX 1660 Super shown on the top grey bar.

It all seems highly dubious to me, and certainly not the kind of thing that most people are likely to notice in the moment. Maybe if you’re a professional esports player, where this sort of stuff is likely to matter a bit more in competitions etc, but for us regular folk who just want to survive more than 12 seconds in a round of Valorant, I’m not convinced these monitors are going to be worth their inevitable premium over their non-Reflex siblings.