Yesterday, I dived into the magical world of themed Crusader Kings III playthroughs, with this sobering exploration of what a man’s life might look like if he cared for nothing except banging giants. I may return to my nightmare re-imagining of C12th Estonia at some point, but not today. You see, today, there’s science to be done.

CK3 is, emphatically, all about planning for the long game. The fact you play as the successive inheritors of a medieval throne means you’re always thinking centuries ahead. Even within the lives of your individual rulers, you’ll almost always want to ensure a long and healthy reign, as that’ll give you more time to work on goals that benefit both your current king and their descendants. Indeed, even Andyamo the giantshagger cultivated a secondary interest in medicine, so that he could extend his titan-tupping career well into his seventies. But what happens if you play with utter contempt for longevity? Playing as recklessly as possible, I want to find out just how quickly a king can get themselves killed.

I figured it’d be cheating to find a monarch already on the brink of death, so I went with one of the classics. Meet King Sancho “The Strong” of Castille. King Sancho is one of approximately seven thousand royal brothers who tend to spend the back end of the Eleventh Century bruting each other to shreds over Northern Spain. He’s wrathful, zealous, and looks like the man who would be on the DVD cover of a Poundland version of 300. He is perfect for this mission. 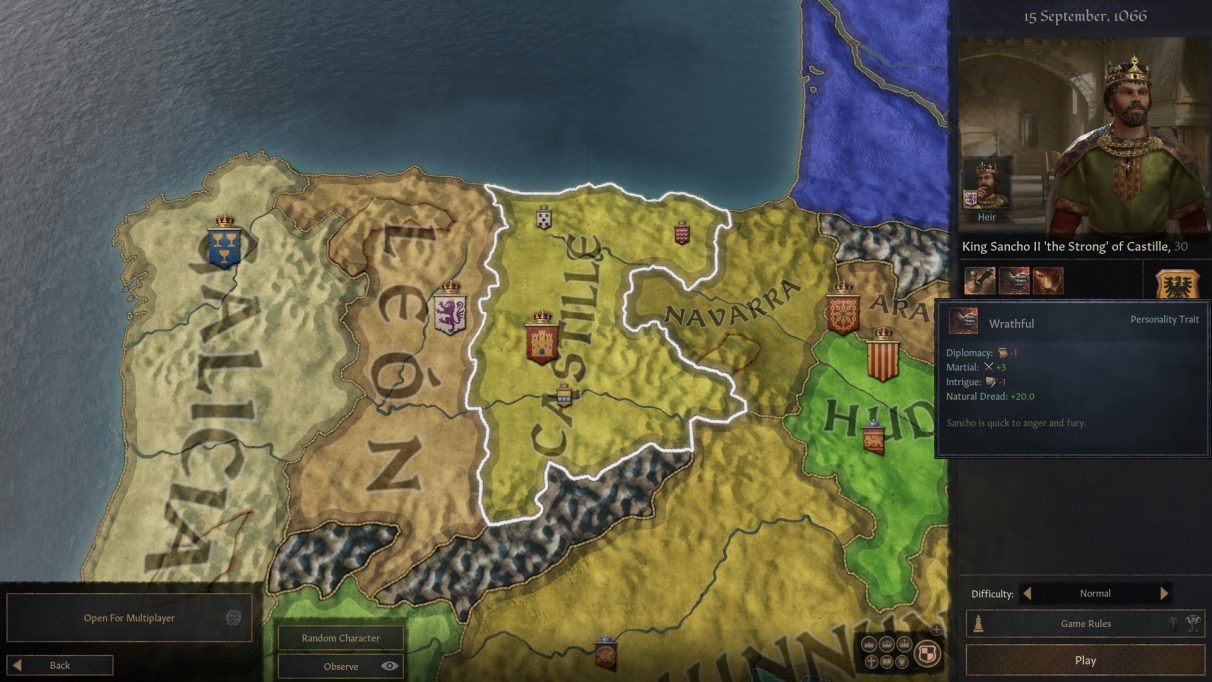 Sancho is a man of action, and so he goes in swinging: on the second day of the game, 15th September 1066, he declares war on Alfonso, one of his many kingly brothers, rounds up every able bodied man in Castille, and leads them personally into hostile territory. This is not a campaign. He’s not even stopped to think about what he hopes to achieve, or what odds are stacked against him. It’s just an act of raw aggression, like a man charging into a pub toilet with a hammer.

Such is the rage of Strong Sancho, that he can’t even contain himself until battle is joined. During the march, he gets on his wooden nokia and barks a series of threats at clergymen until someone imprisons the Archbishop of Castille. He is immediately proclaimed a sinner across Christendom. It is then that the fight starts. Alfonso’s army is twice the size of Sancho’s, and his men are being butchered, thanks to their commander’s decision to attack a mountain pass held by the enemy. But that’s fine by Sancho. In fact, even as he swings his sword at the faces of cudgel-bearing yokels, in a ravine knee-deep in gore, he decides he’s going to get married. Who knows how he accesses Medieval LinkedIn during this pitched battle, but he does, and selects a sadistic, lunatic peasant from the depths of France as his bride. 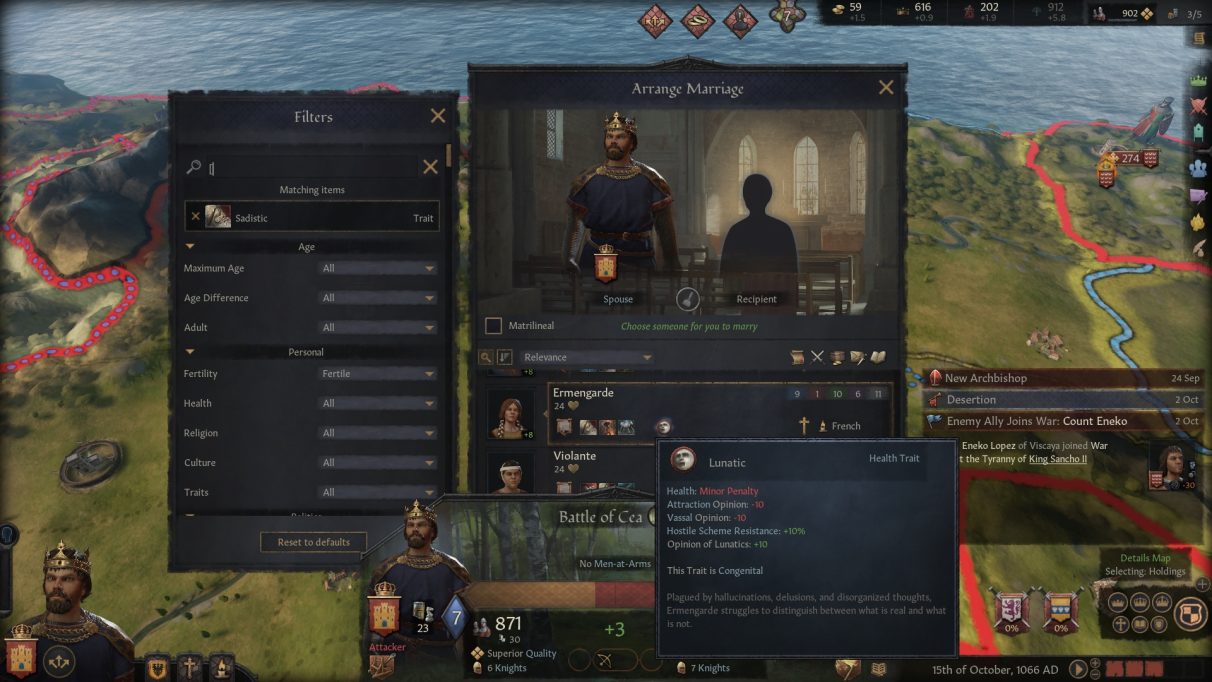 A match made in… I dunno, probably a microwave.

The impending nuptuals please him, and so, after ramming his blade into yet another hapless foe, he decides to celebrate by incarcerating more high-ranking clergy for no reason. “Have they got a new fackin’ archbishop installed yet?” he snarls into his oaken mobile phone, to terrified assent from the other end of the line (I’ve decided Sancho talks like a Guy Ritchie film character). “Good,” concludes the blood-drenched monarch. “Imprison the c**t”. Then he eats the phone.

The battle is, of course, a brutal defeat. But that’s no real hassle. Sancho declares two more wars while leading the bedraggled wounded home, just for a laugh, and then goes to the cathedral to do more imprisoning. Barely can an archbishop touch arse to throne without Sancho’s manacles crashing down on their holy wrists, and soon the dungeons are heaving with theologians. But this bores Sancho, so he decides to murder the mayor of his capital city instead. 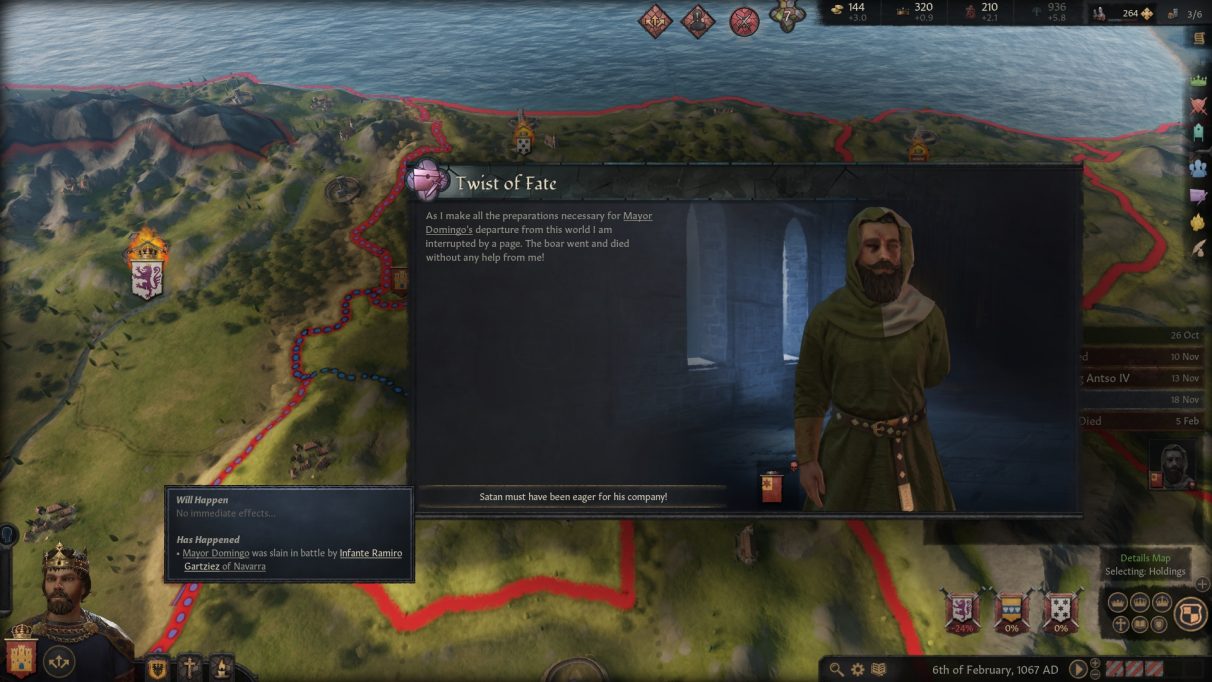 To Sancho’s annoyance, the mayor dies before he can even get near him with a dagger. The King wonders if he has perhaps become so angry that he can kill people just by thinking about it, but then his hopes are dashed. When he goes to hurl a lager can out of his palace window, he notices that the armies of two of his brothers, plus a peasant revolt and a saracen holy war to boot, are ransacking the lands of Castille, and the mayor he’d hoped to shank has perished in one of the many horrifying sieges. “Fackin’ lovely,” he growls through a belch, then staggers off to find someone else to upset.

As his kingdom goes up in flames beyond the city walls, Sancho amuses himself by appointing a clutch of utter dunces as the council in charge of overseeing his realm, then attempts some random assassinations of courtiers. But every single time, the war claims his victims before he can, and he is left disappointed. Amazingly, at one point, he is prompted to investigate the attempted murders that he himself is committing. “Case closed lol, it’s me,” he says, winking vilely to camera.

Sancho is just having a think about assassinating his wife, since she’s one of the few people in Castille who isn’t halfway through dying in battle already, when a crowd of soldiers led by his brother Alfonso himself burst through the palace gates. They have taken the city, and Alfonso is overcome with relief as his men hurl Sancho into a prison. 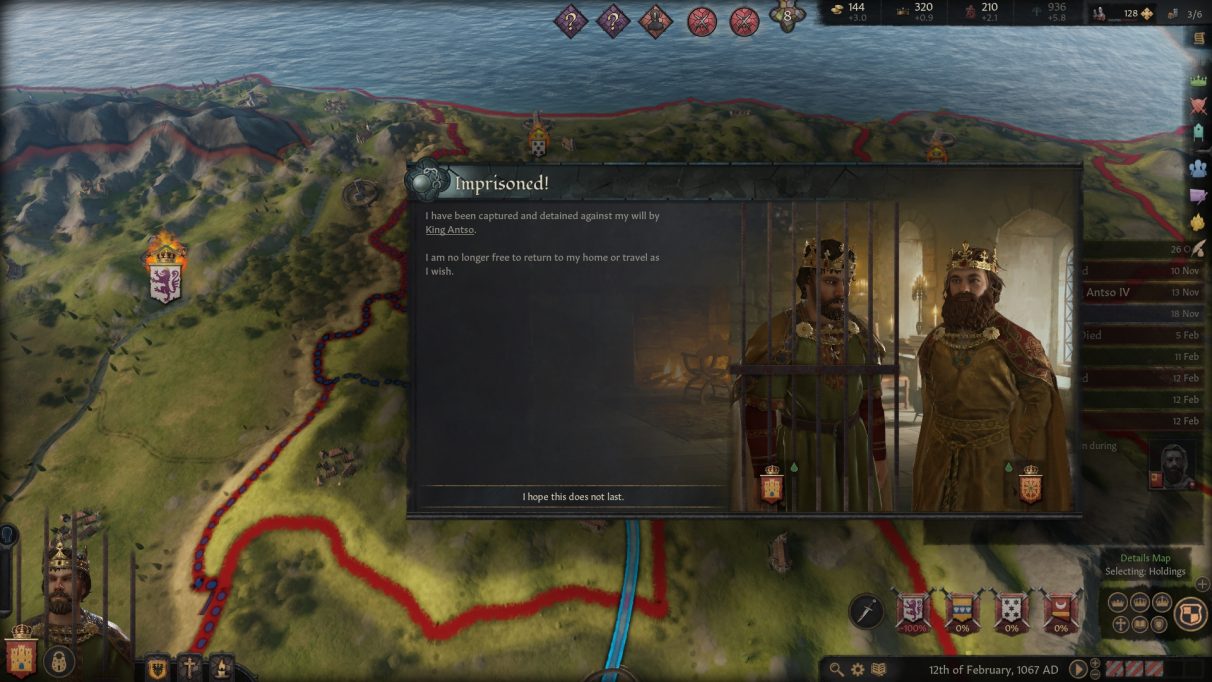 The rival King begs Sancho, with tears in his eyes, to stop the madness and get back to the usual cloak-and-dagger throne-jostling that Spain is used to. He says that if Sancho will only surrender and change his ways, he can have all his lands back, and have another chance at the regal life. Somewhat over a barrel, the rogue monarch sullenly agrees to Alfonso’s terms.

But the second he’s out of jail, Sancho looks his brother right in the eye and holds his stare as he pulls out his phone, dials the pope’s number with fingers like a pack of gone-off Richmonds, and holds the block of wood to his ear. “His holiness?” says a beatific voice on the other end. “You’re fackin’ dead,” hisses Sancho, and gurns unrepentantly, right in his sobbing brother’s face. 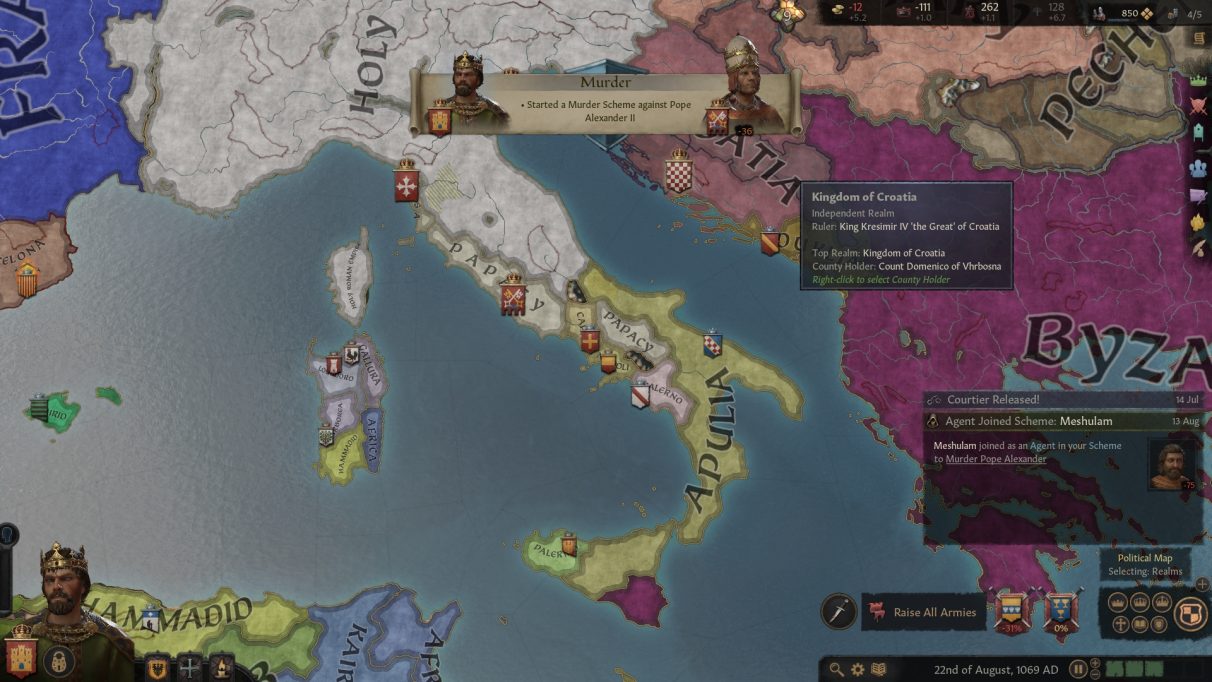 At this point, Sancho is declared too much of an international disgrace to even be allowed to start wars any more, limiting his options for antagonising people somewhat. But there’s plenty of other fun to be had. He hires an incredibly evil woman, who also hates him, to be his spymaster, and sends her texts daily daring her to assassinate him. Then, excited for his upcoming trip to Italy, Sancho remembers all the former archbishops festering in his dungeons, and decides to get in the popeslaying mood by torturing them all to death. After that, just in case anyone in the church still likes him, he converts to the Lollard heresy, because its name contains the word “lol”. Amazingly, several high-ranking nobles decide his example is worth following, and they too convert.

Somewhere among all this, Sancho’s nightmare wife bears him a son. But Sancho cares not for life, only for death, and after naming his son “The Living Threat”, promptly forgets about him. 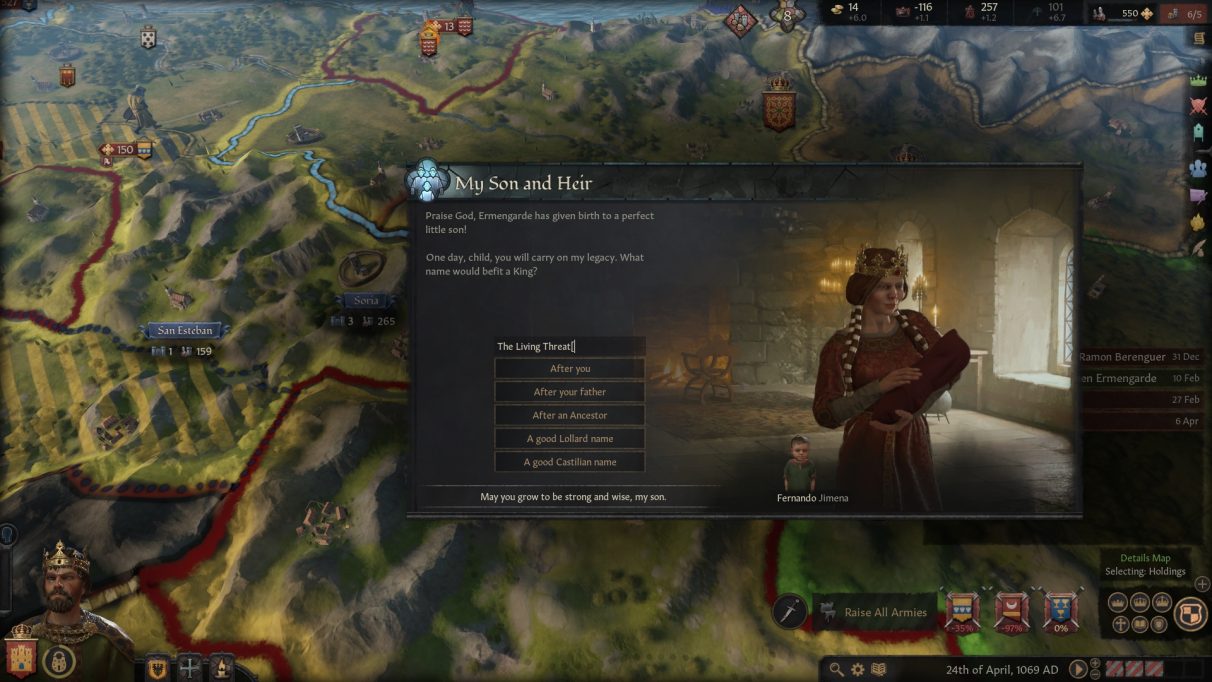 The pitter-patter of tiny fists.

As The Big Day (for killing the Pope) approaches, Sancho unexpectedly makes the choice to scout out the farmland where the fatal ambush is being planned himself, rather than sending henchmen. Needless to say he gets horribly lost, and finds this hugely stressful. Somewhat awkwardly, he is also discovered in the process. By the Pope. “Just passing through,” growls the dishevelled monarch with a knife between his teeth, to his very disconcerted Holiness, and is somehow allowed to walk free. Back home, he finds he now also has a daughter, who he names “Guns”, and also forgets. 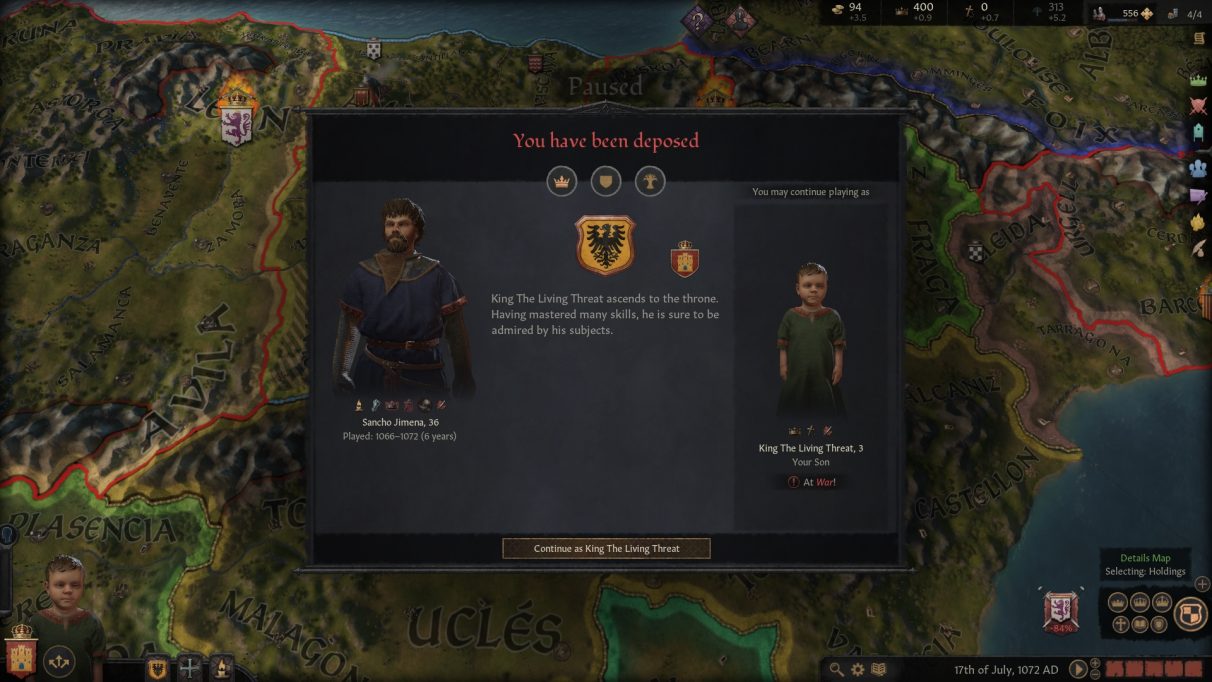 But the fun can’t last forever. Before he can even have his shot at the Pope, King Sancho is deposed by what I can only assume is a coalition of every surviving human in Castille, after a reign that has lasted six years. He cedes both his kingdom, and player agency, to his three-year-old son The Living Threat.

It’s over for Sancho. But not in the mortal sense, so the challenge is still on. Sancho The Strong must die. Playing as young TLT, then, I pretty much let my kingdom run on autopilot, speeding through the years until I become an adult, and can finally hunt down my monstrous father. The young Threat keeps an eye on Sancho the whole time: he lives as a sort of rage-fuelled vagrant for a number of years, waking up roaring in haystacks, and spending the day having shouting matches with imaginary Popes. But by the time The Living Threat turns sixteen (having become, personality-wise, even more of a devil than his father was), the deposed monarch has rejoined civilisation, and is scuttling around his brother Alfonso’s court, like a rat with a sword. 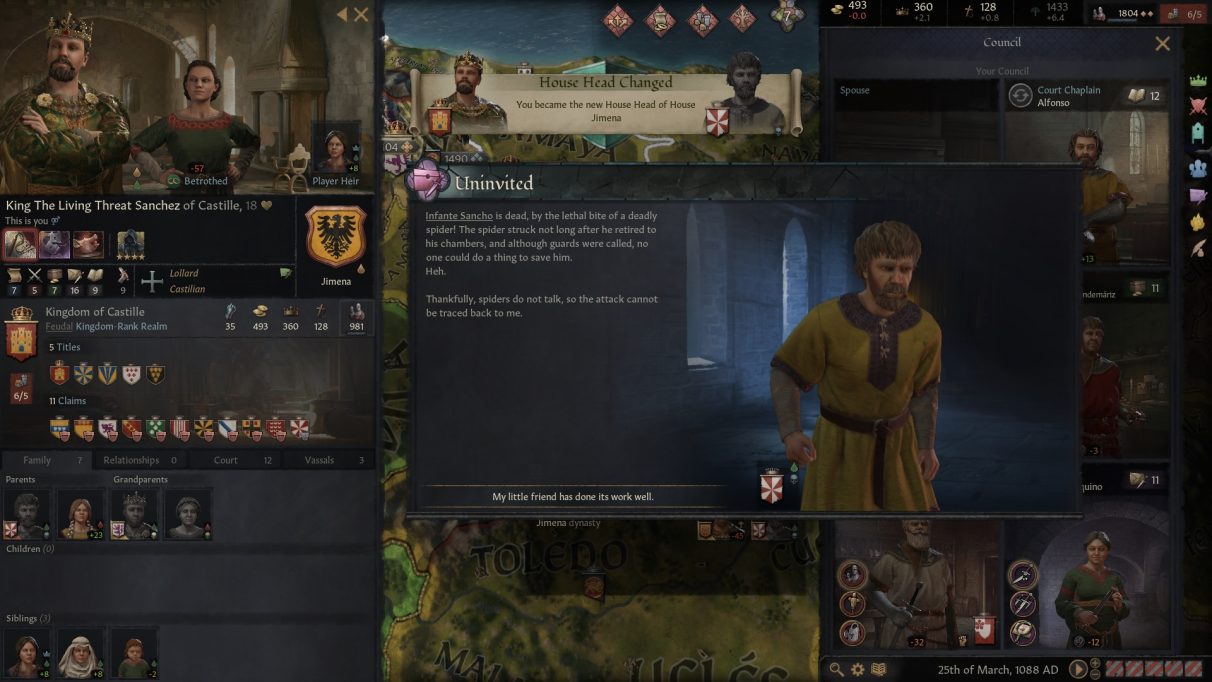 Spain breathes a sigh of relief.

Now come of age, The Living Threat finally takes his chance to make good on the name his father had unthinkingly given him. Because of the sheer number of people who despised Sancho, would-be murderers are queuing up at TLT’s palace gates the second the scheme begins, and as far as I can tell, it takes barely minutes for the former monarch to be hunted down and – I imagine – drowned in spiders. It is the 25th of March, 1088AD, meaning Sancho survived 22 years of my best efforts to kill him. But at last, the juggernaut is stilled, and Spain breathes a sigh of relief.