Intel have officially unveiled their 11th Gen Tiger Lake laptop CPUs with integrated Xe graphics, and they might just be about to change the future of gaming laptops. With up to double the gaming performance compared to Intel’s previous generation of mobile CPUs, Tiger Lake laptops with Xe graphics were shown playing big blockbuster games such as Grid and Gears Tactics at 1080p at close to 60fps during Intel’s online press conference this evening, representing a huge leap in performance for ultraslim laptops compared to their AMD and Nvidia-powered competition.

Sticking with the five Tiger Lake Xe processors for now, though, these are all 4-core, 8-thread CPUs that make use of Intel’s new SuperFin 10nm process technology. This is a new transistor design that manages to increase performance while operating at lower voltages, allowing Intel to seize that extra headroom that often gets lost when everything’s running that bit hotter. Indeed, with peak frequencies hitting up to an impressive 4.8GHz on the top Core i7 Tiger Lake chip (within an operating range of just 12-28W, no less), that’s quite a bit faster than AMD’s top Ryzen 9 mobile chip, which has a max boost clock speed of 4.4GHz and operating range of 35-54W. 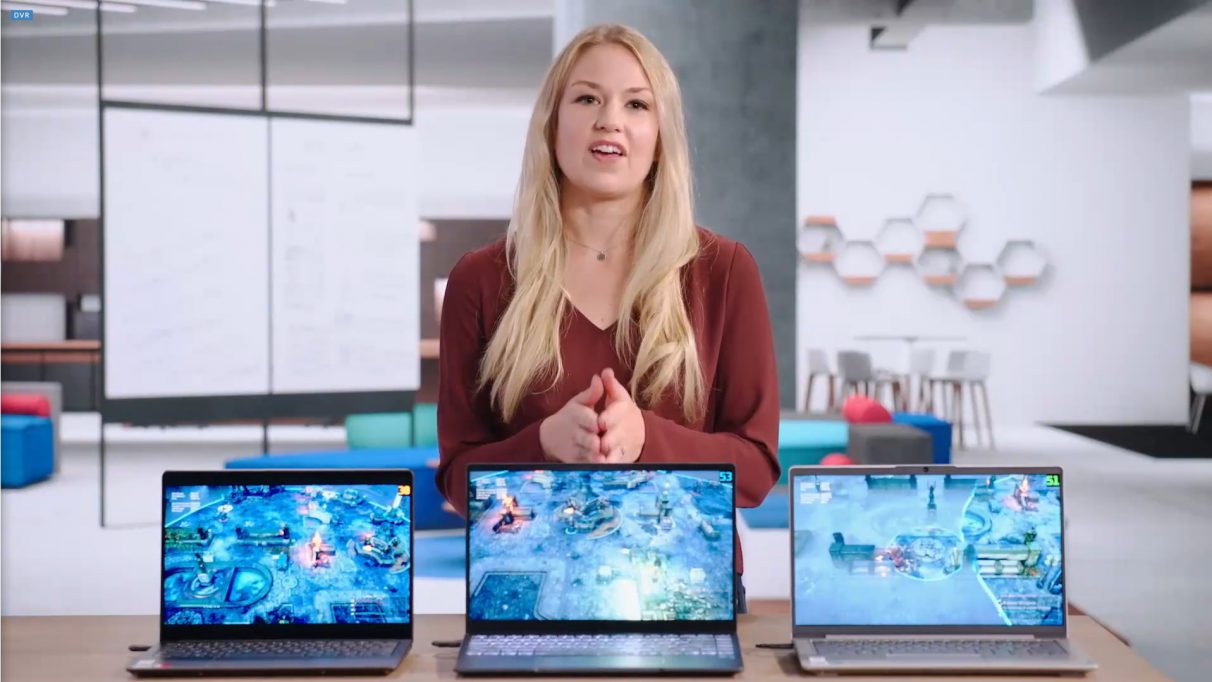 As for graphics, the two Core i5s come with 80 EU (or execution units) on their integrated Xe chip, while the Core i7s have the top billing of 96 EUs – that’s double the 48 EUs you’ll find on the UHD Graphics chips inside the 11th Gen Core i3s. Admittedly, Intel didn’t specify what quality setting their Tiger Lake Xe CPUs were running to produce their near 60fps speeds at 1080p during their online demonstration, but compared to the integrated graphics found in their nearest competition, namely AMD’s Ryzen 7 4800U and a laptop running a 10th Gen Core i7 with a discrete Nvidia MX350 graphics chip, the initial results look very promising indeed. 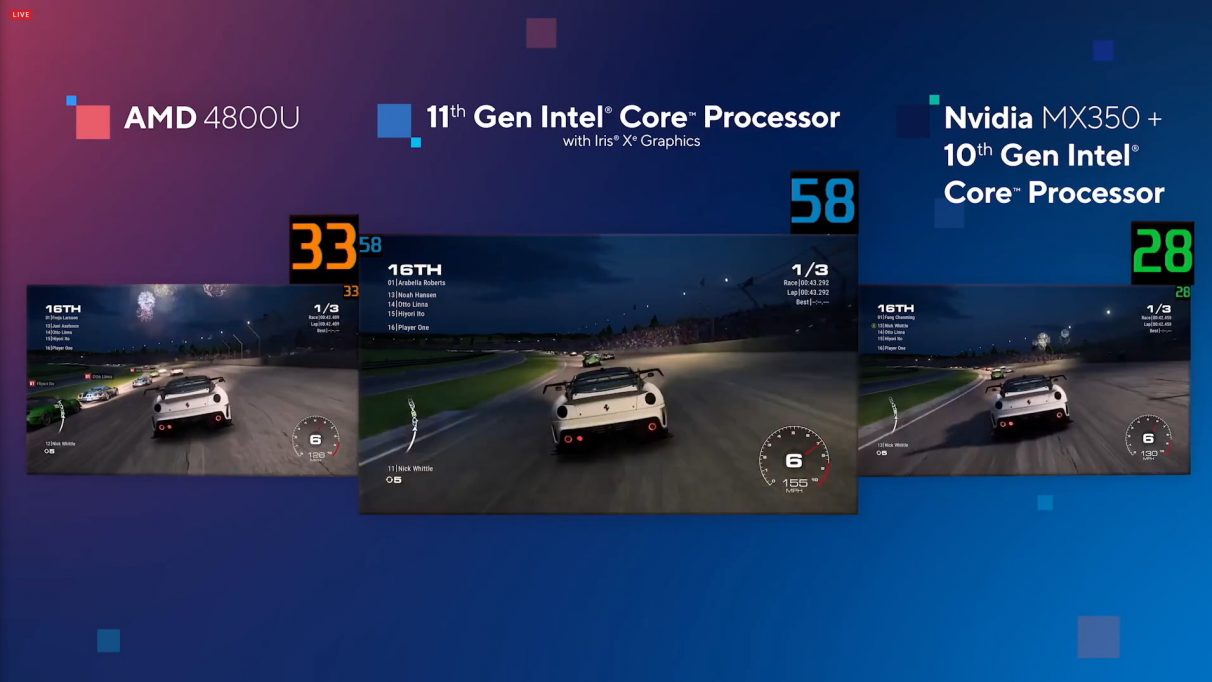 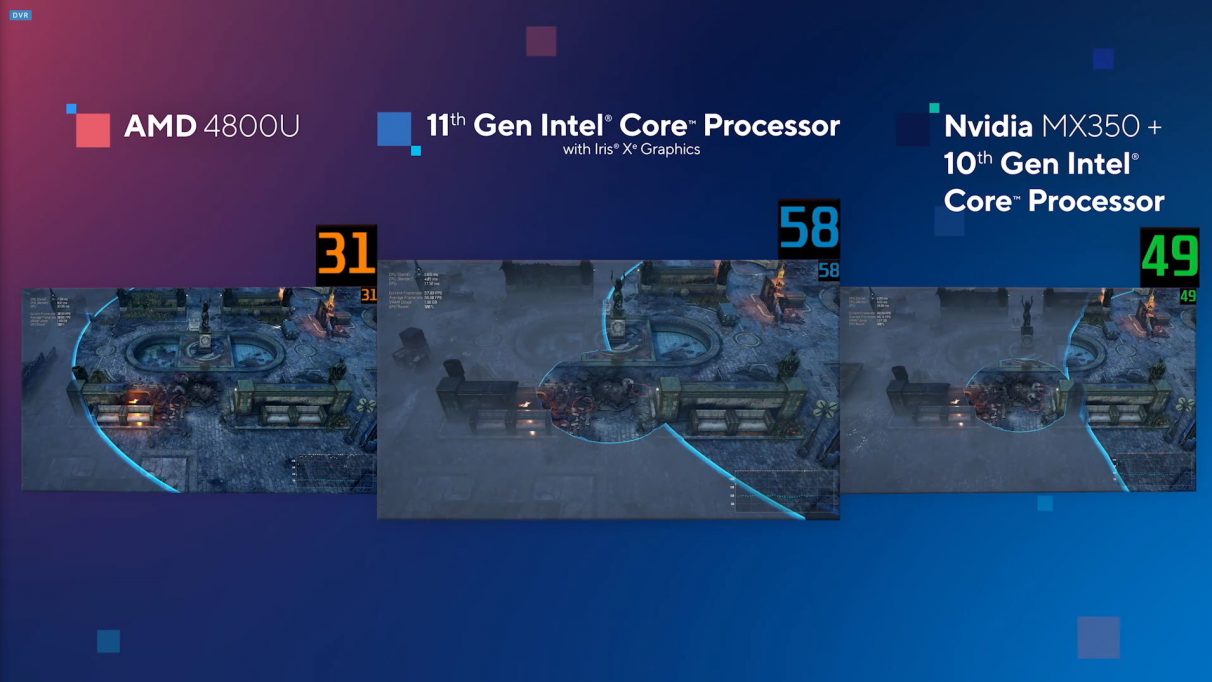 It’s not just gaming where Tiger Lake is set to excel, either. According to Intel’s figures, Tiger Lake offers up to 20% faster office productivity versus the competition, as well as up to 2.7x faster real-world photo editing and 2x faster real-world video editing. Intel have also paid close attention to how these chips run on battery, too. Here, Tiger Lake offers up to around 20% more system-level power versus their previous generation of mobile chips, which Intel says translates to around an hour of extra video streaming when you’re away from the mains. Not bad if you’re a serial Netflix watcher at bed time.

Throw in Thunderbolt 4 support, Wi-Fi 6 and enhanced audio with AI-powered noise suppression, background blur and super video resolutions (effectively an Nvidia RTX Voice-like set of capabilities built straight into the laptop), and that’s a tantalising set of specs and features. 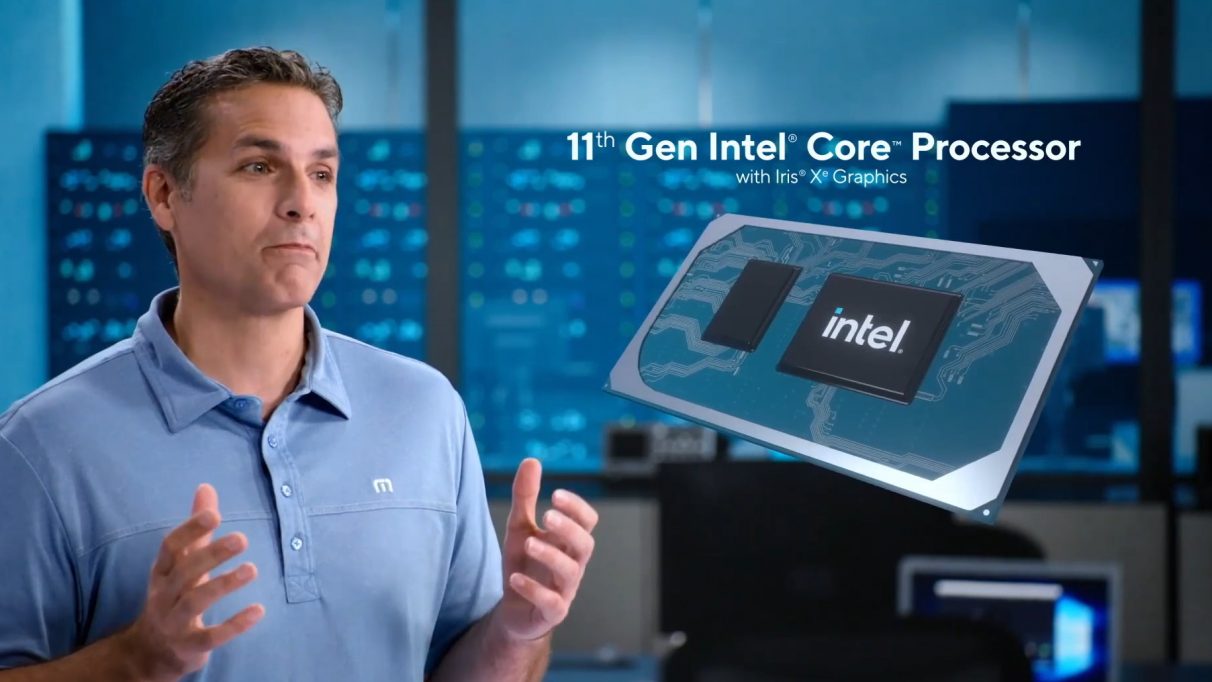 Find someone who looks at you the way Intel’s Boyd Philips looks at this giant Tiger Lake Xe chip.

I’m particularly excited to see what Intel’s Xe graphics chips make of today’s other big games, too, as the brief glimpse shown off in their presentation looked very promising indeed. We won’t have to wait long to find out, either, as there are more than 50 new laptops due to arrive with Tiger Lake before the end of the year, according to Intel (which is currently the same time frame they’ve got for their first full-blown Xe desktop card), and there are over 150 designs expected in total. Watch this space.