The tech behind the super fast load times on the Xbox Series X is coming to PCs in the form of DirectStorage, Microsoft have announced. The DirectX API aims to dramatically reduce loading times and enable developers to create bigger, more detailed worlds than ever before thanks to its “best in class IO tech” (that’s input / output, in case you’re unfamiliar with the term) – if you’ve got the right kind of SSD, that is.

But what is DirectStorage really, and how does it differ from Nvidia’s recently announced RTX IO, which promises a very similar thing for the new RTX 3070, RTX 3080 and RTX 3090 cards? Read on below for everything you need to know.

If, like me, you’ve been wondering why SSDs are apparently going to do so much more for the PS5 and Xbox Series X than what they’ve currently done for us in PC land so far, it’s all to do with the state of our current storage APIs. According to Microsoft, current storage APIs aren’t optimised for the high number of IO requests demanded by modern games, and they often can’t scale up to take advantage of the super fast speeds offered by NVMe SSDs.

“Even with super-fast PC hardware and an NVMe drive, games using the existing APIs will be unable to fully saturate the IO pipeline leaving precious bandwidth on the table,” Microsoft said in their blog post.

Enter DirectStorage, a new API that aims to get rid of those age-old bottlenecks in order to improve load times and allow game worlds to be bigger and more detailed than ever before. In a nutshell, DirectStorage streamlines your PC’s entire IO system so it can load in data to your RAM and graphics card memory banks much more efficiently. It also uses “the best current and upcoming decompression technologies” to get said data into your GPU quickly so it can be rendered, and effectively allows games to fully maximise the performance throughput of your NVMe SSD.

“In this way, developers are given an extremely efficient way to submit/handle many orders of magnitude more IO requests than ever before ultimately minimizing the time you wait to get in game, and bringing you larger, more detailed virtual worlds that load in as fast as your game character can move through it,” according to Microsoft.

There are a couple of catches, however. For now, DirectStorage will only be supported by certain NVMe drives, and Microsoft haven’t yet announced whether existing PCIe Gen 3 NVMe SSDs will be compatible with it, or whether it’s going to be something reserved for the incoming generation of PCIe 4.0 SSDs. That’s partly because Microsoft are still in the process of finalising their DirectStorage API and its supporting components, and it probably won’t be sometime until next year when they release their developer preview that we hear more about it. In the meantime, if your PC doesn’t end up supporting DirectStorage, “games will continue to work just as well as they always have,” Microsoft say.

In all likelihood, you’ll probably need a PCIe 4.0 NVMe drive if Nvidia’s RTX IO explainer is anything to go by, which is another new piece of tech Nvidia announced alongside their new Nvidia Ampere GPUs. RTX IO will plug directly into Microsoft’s DirectStorage API when paired with one of their upcoming RTX 3000 cards, and Nvidia claim it will help accelerate IO performance by up to 100x compared to hard drives and traditional storage APIs. 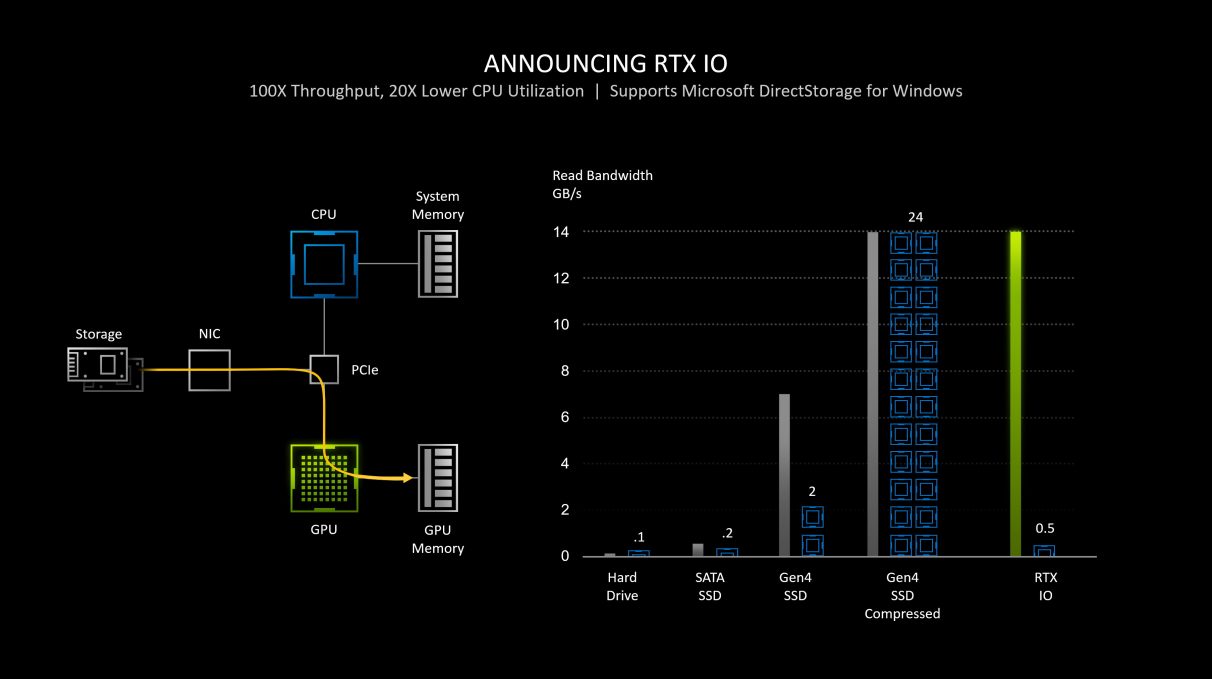 RTX IO works by offloading a lot of traditional CPU-heavy work to your RTX GPU.

“When used with Microsoft’s new DirectStorage for Windows API, RTX IO offloads dozens of CPU cores’ worth of work to your GeForce RTX GPU, improving frame rates, enabling near-instantaneous game loading, and opening the door to a new era of large, incredibly detailed open world games,” according to Nvidia.

Indeed, Nvidia call DirectStorage a “next generation storage architecture designed specifically for gaming PCs equipped with state of the art NVMe SSDs,” so I wouldn’t be surprised if existing PCIe 3.0 NVMe drives end up being left out in the cold.

What I am keen to find out, though, is whether Nvidia’s RTX IO tech will end up being even faster than DirectStorage when they’re used together. After all, the upcoming second generation of Big Navi GPUs sit at the heart of both the Xbox Series X and PS5, and I’d imagine that AMD’s imminent RX 6000 graphics cards will be built around Microsoft’s DirectStorage tech as well. AMD have always favoured open source technologies rather than going down their own proprietary route like Nvidia, so I’d be very interested to see whether Nvidia’s RTX IO adds anything on top of DirectStorage, or whether it’s just nonsense marketing fluff to make Nvidia’s RTX 3000 cards look better.

Either way, we’re still going to have to wait until sometime next year before we can truly find out, as even Nvidia end their RTX IO explainer by talking about the Microsoft developer preview mentioned above. For now, you better start saving for that all-important PCIe 4.0 SSD, because if they all end up costing anything like Gigabyte’s Aorus NVMe Gen 4 SSD, then your next PC upgrade start to get very expensive indeed.