Heaven’s Vault is one of those games that manages to occupy every waking moment of your life as soon as you start playing it. It’s an archaeological linguistics mystery that sees you hop between planets and sail across vast, serene space rivers as you work to uncover the secrets of an ancient civilisation through the power of translation, deciphering age-old hieroglyphics so you can understand more about what the future holds for your home region of space known as the Nebula. I couldn’t stop thinking about it when it came out in the spring of last year, and as we inch closer to the release of Inkle’s next adventure, the Arthurian-based Pendragon, I’ve found it’s wormed its way back inside my brain yet again.

Aliya and her robot pal Six are a big part of what makes Heaven’s Vault so special. They have a great dynamic, with Aliya’s headstrong enthusiasm for sniffing down clues constantly butting heads with Six’s prim and proper ‘play by the rules’ outlook. They can be wonderfully sarcastic and catty with each other depending on your choice of dialogue options, and their playful, combative exchanges help bring a real sense of energy and liveliness to the game’s often ponderous exploration sections.

They’re one of PC’s great detective duos, but it’s the game’s focus on language and translation that really gets the old grey cells a-whirrin’. You begin with an almost comically small vocabulary of what these weird, squiggly hieroglyphs might mean in Heaven’s Vault, and a lot of your early translations may only let you decipher a single word or phrase. But gradually you start to see fragments of those familiar patterns emerge elsewhere, hinting at alternative meanings and interpretations, until eventually you’re constructing entire sentences with your newfound fluency. It’s a satisfying feeling, this sense of proficiency, and the best thing about it is there’s rarely a wrong answer – or at least not one that would get you a big red cross on your Nebulan language exam, anyway. 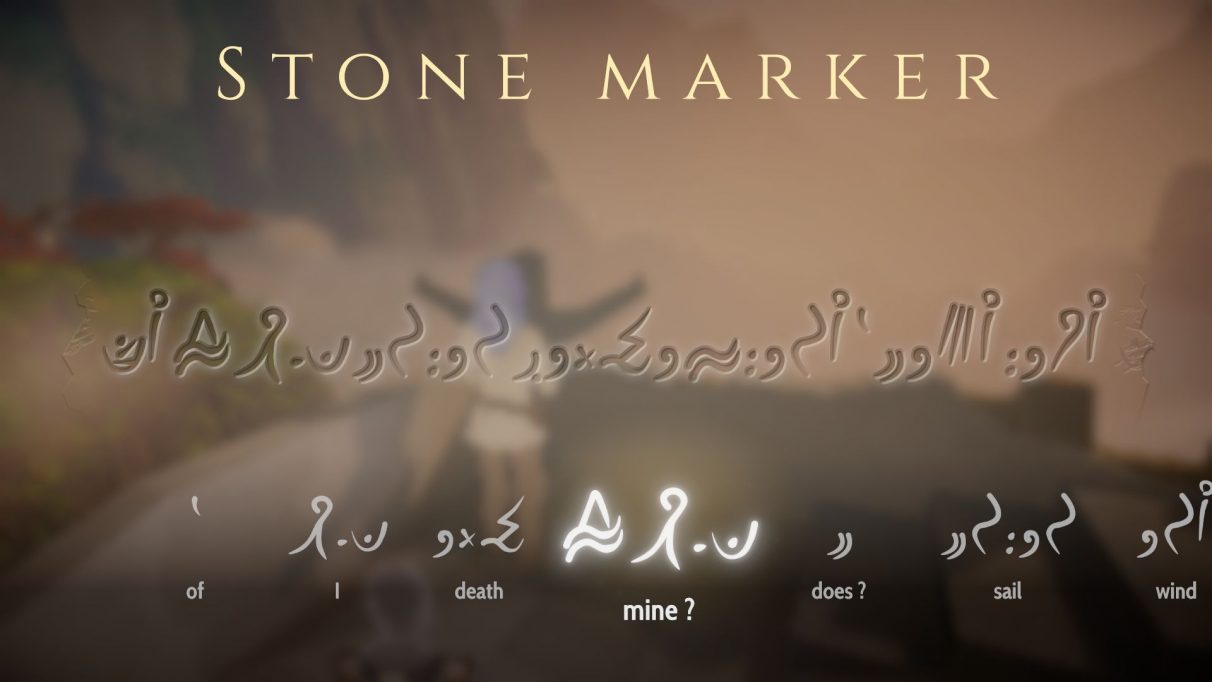 When translating bits of text, you can slot in your known (and guessed) vocabulary to try and make sense of it. If you can’t make any progress, Aliya files it away for later so you can try again once your language skills have improved.

Instead, Heaven’s Vault gives you the freedom to draw your own conclusions about the places you visit and the objects you find there, and its clever word suggestion engine plays a crucial role in helping you figure it all out. If you know part of a word or phrase you’re unfamiliar with, the game will give you a handful of options that might fit the bill.

When I visited a strange landmark that seemed to incorporate the words ‘house’ and ‘sick’, for example, I presumed it was probably some kind of ancient hospital. But the more I learned about this place through its scrolls, artefacts and other alien scrawls, the more I came to realise that it wasn’t actually a hospital, but a kind of palatial mausoleum – and my little dictionary of Nebula speak adjusted itself accordingly to reflect my newfound knowledge. So yes, my initial guess might not have been correct, but I still managed to arrive at the ‘right’ answer in a natural and organic way rather than being made to feel like a dunce who didn’t know any better.

It’s this morphing, ever-changing relationship you have with the game’s language that really cemented its brain-worm status for me. I was forever mulling over possible word meanings and how it might affect this, that, or the other, and when you layer that on top of the game’s central mystery of what in the heck is the titular Heaven’s Vault, the possibilities of what it all might mean in the end seemed deliciously open-ended. Whenever I wasn’t playing it, I was itching to get back to it, and when I finally thought I’d reached the end, its New Game Plus mode goes and turns everything on its head, giving you even more complex words and phrases to translate that just build and build and build on what you learned before.

It is, in short, a masterpiece that I will be thinking about and returning to for many years to come, and you should absolutely definitely play it if you haven’t already. You can get it (and its excellent soundtrack) on Steam and GOG for £20 / €22 / $26.

Tagged with feature, Have You Played, Inkle Studios, Heaven's Vault.