One of the strange things about Crusader Kings 3 is that the sheer size of the world means that even the mightiest empire will still operate in perhaps a quarter of the map at most. When you’re a small realm, or one squished into a corner like Ireland or Kham, you can spend the entire game without proof that most of the world even exists.

It’s a good thing. I like it. Sometimes I like to pause and scroll around the world to see how it’s doing while I was busy taking Yorubaland to the regionals. And that’s when I noticed something about all the AI dynasties.

They have mottos. They have randomly generated mottos. And yet, they have no independent body to evaluate the best ones and give them appropriate awards. Well, we’ll just have to fix that.

Kicking off with the boring awards so we still get the latecomers, it’s House Cheinnselaig. Inevitably anglicised as Chinslag, they win the Actually Quite Good award for their motto, “Remember The Death Of Énna”. Hovering over the name reveals it to mean Chieftain Énna of Leinster. I don’t know medieval Irish history remotely well enough to tell, but this looks like a reference to Énnae. Not every starting character in CK3 is based on a real one, but an impressive number of them are. 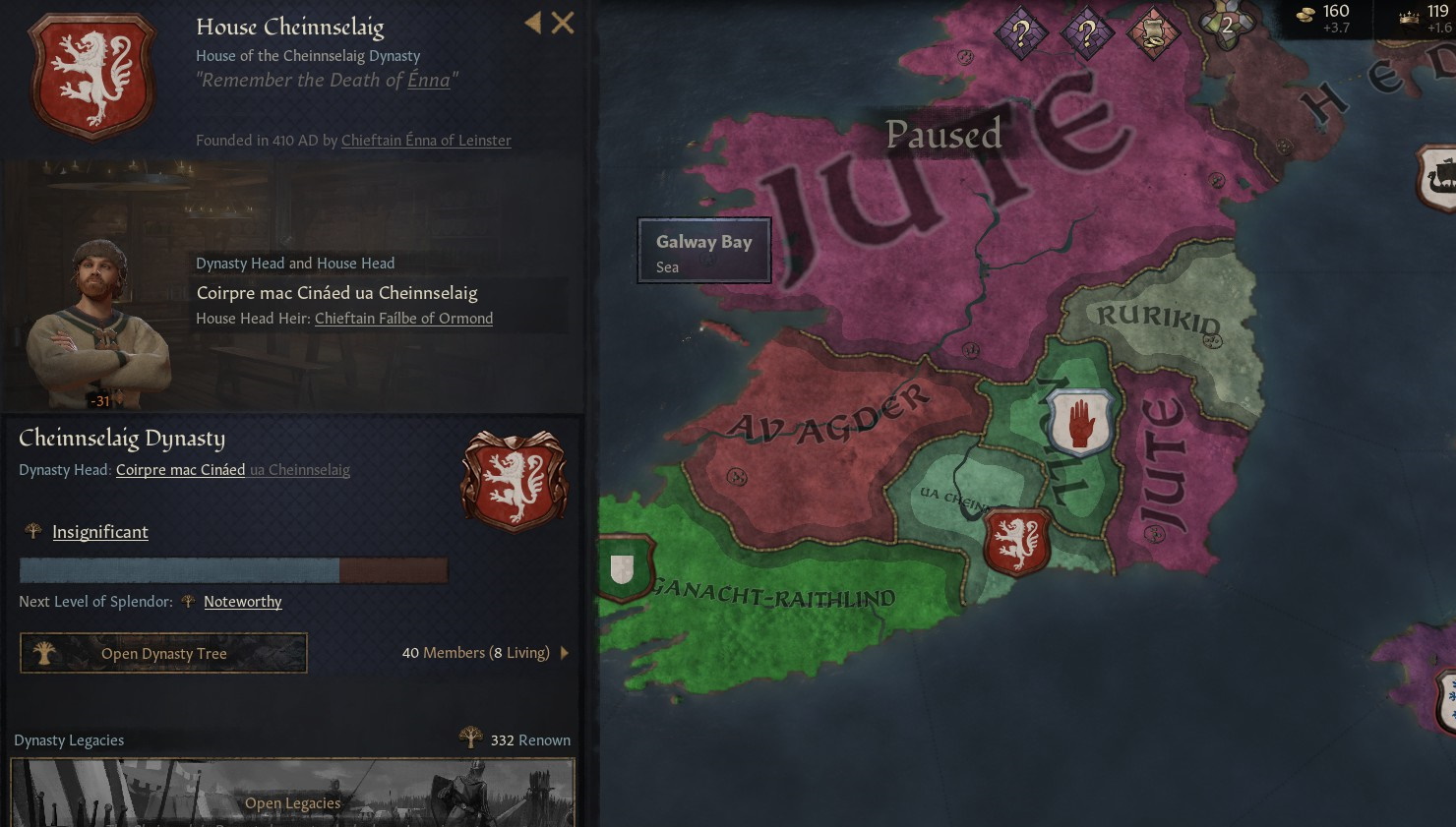 Remember that guy from 500 years ago? He was great.

House Eóganacht-Raithlind, another Irish dynasty clinging to the corner of Munster, take both the Still Bitter About It and Most Likely To Abuse A Loophole awards with their words: “None Shall Freely Attack A Disarmed Man”. Their dynasty head is, unsurprisingly, a 9 year old child. Oh god, he has dwarfism too. Jesus, who attacks a nine… mate. I take it back, that’s well out of order. Send me an emissary, yeah? The Oyo crew will hit ’em back for you. 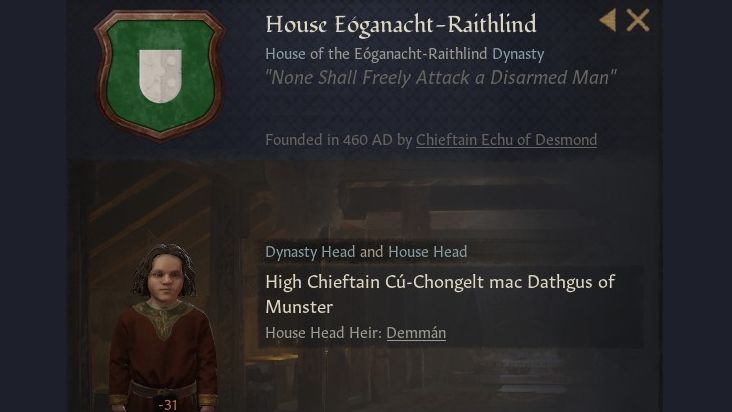 House Lincoln, meanwhile, are currently running Essex (East Seaxe, which here also covers London, and much of modern Middlesex and Berkshire, and pronounced “east sex”, to the delight of schoolkids in all three) rather than Lincoln. They’re also about to drop their third mixtape under the family motto, “No Doubt”. 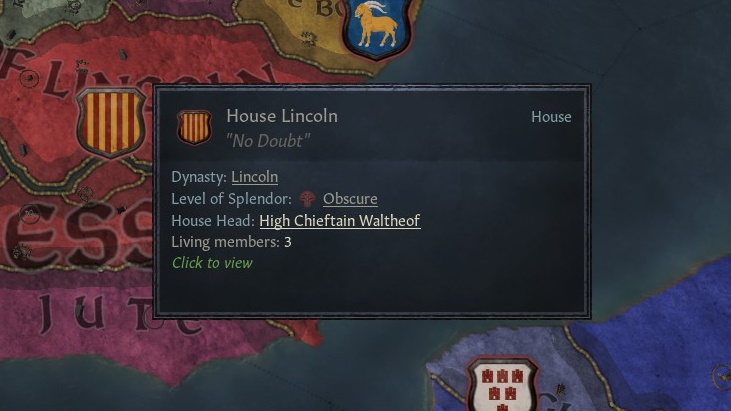 House Kamerijk of Ostriesland opt for the trembling “In My Safety, God Shield Me”, presumably traumatised after centuries of Viking attacks. They’re a one-county house with a single living member, pressed up against the North Sea by two of the biggest kings in the region. She has no allies either. I’d be nervous too, to be fair, but she still gets the Like A Leaf award. 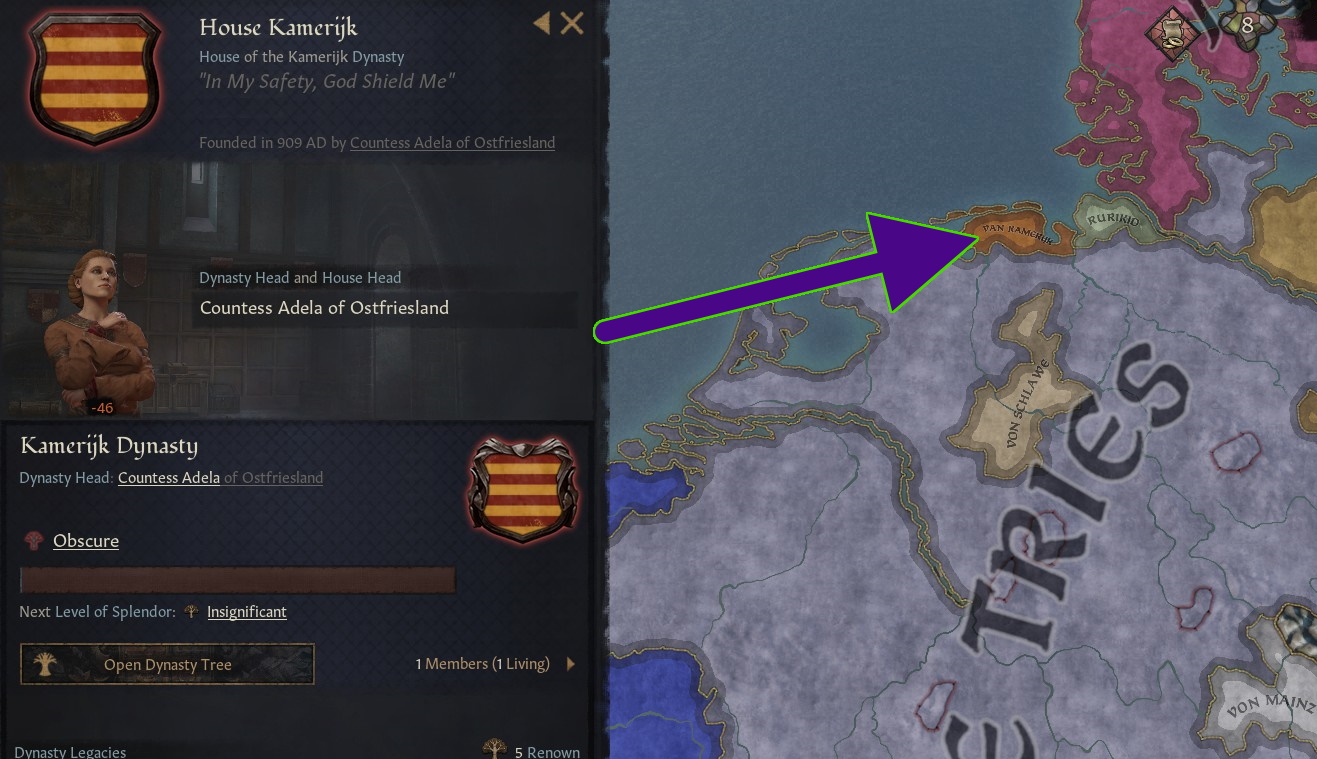 I guess you can’t be too careful. Might have gone with “This Is Fine” myself.

Kamerijk’s almost-neighbours to the south, House Schlawe, hold the tiny patch that is the other Munster, surrounded by the sea of Lotharingia. They also hold the German Beyond Time And Space award thanks to their funny-even-if-it-was-a-joke motto, “Dare To Be Industrious”. They too are a one-man-band with no allies, but you know what? I have a feeling they’ll be fine. 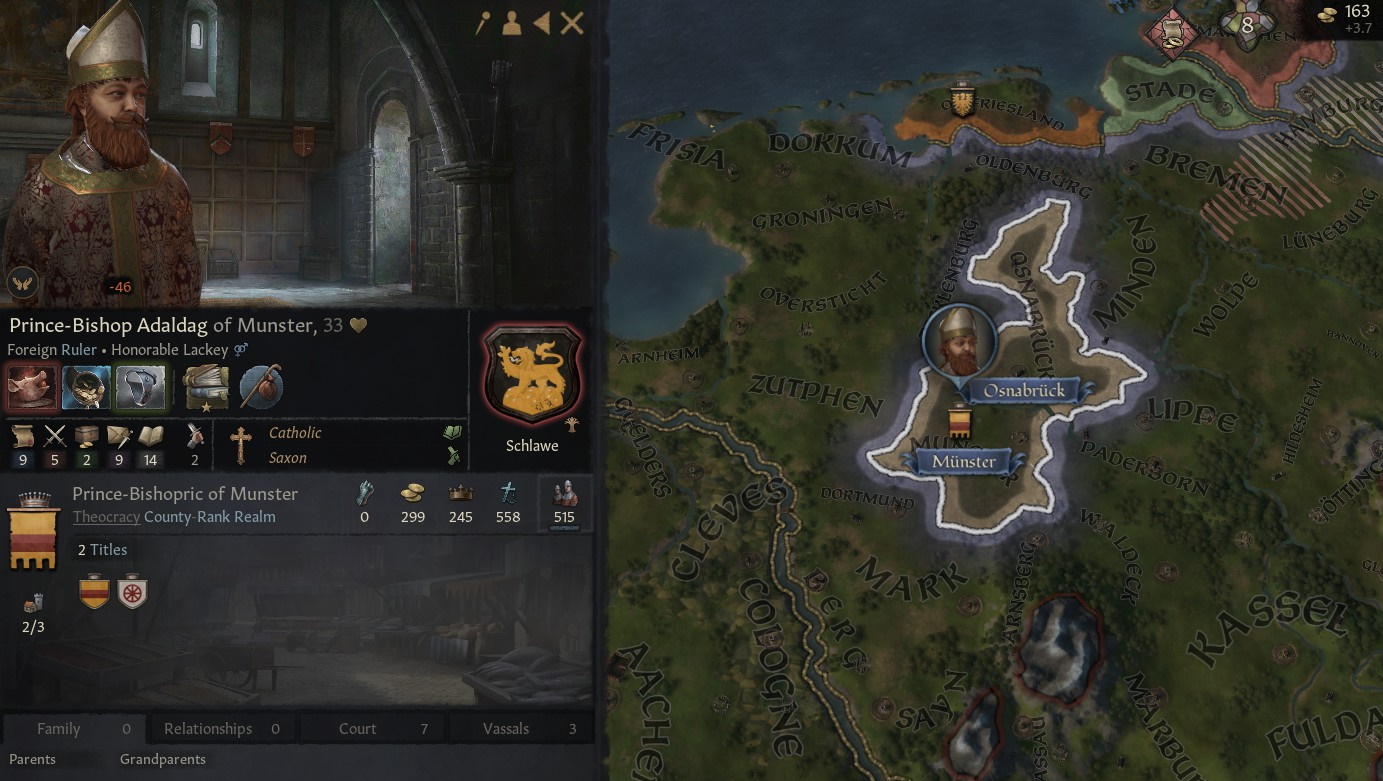 Haha, I bet he has a healthy welfare state and a competent education system, too. Probably speaks three languages. Idiot.

Over in Prussia, which surprisingly has literally zero development, live house Wolini, another joint winner, this time of the Who Could Have Foreseen This Outcome, and the Honest Jon’s Reliable Autos award for their motto, “Trust Them”. 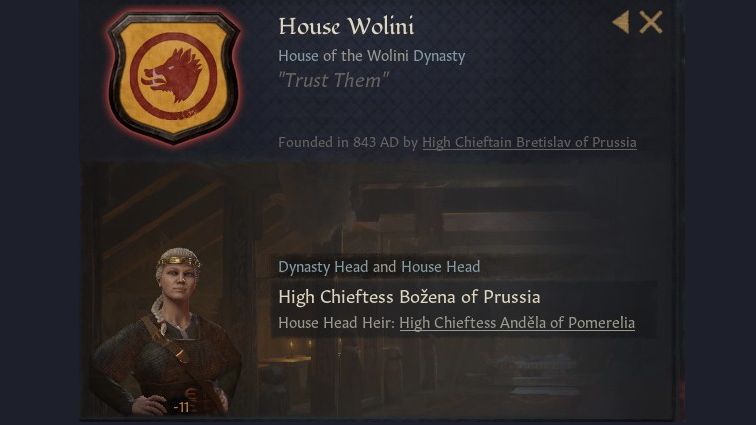 “Have you been injured in an uprising that wasn’t your fault?”

The the south of Wolini we find House Mazowszan, ruling over the delightfully named Plock, and winners of the Wait, What award. Proving that Ireland’s reach transcends time and space, they’ve taken inspiration from House Cheinnselaig, defining themselves with the phrase “Remember The Death Of Borzysław”. 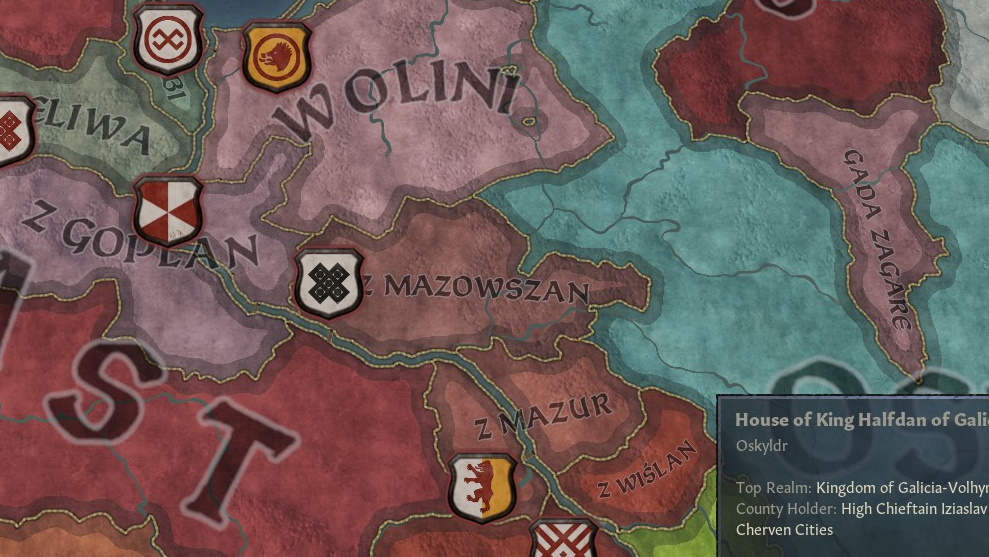 He has a very high intrigue score. And the ‘Paranoid’ trait. No, really.

Far East, deep into not-yet-Russia, the dynasty of Volan rule over Vologda. Their only nomination is for the Didn’t Even Try award, which is a bog roll tube someone has drawn an indifferent face on. They share it with the even-farther-East Khori-Tumed of Togina, Mongolia. Their mottos are, respectively, “Honor”, and “Faith”. You boring bastards don’t even deserve a picture. I’d say fight over it but I doubt you have it in you to be that interesting. Take it and get out.

Down in warmer climes we have House Makedon, which I assume is either connected, or claims to connect to yer man Alexander, although who knows with the Byzantines. They probably had to fill in 300 forms for that name. They secure the the uncomfortably damp Is This A Sex Thing award for “Until Our Goodness Engulfs The World”. 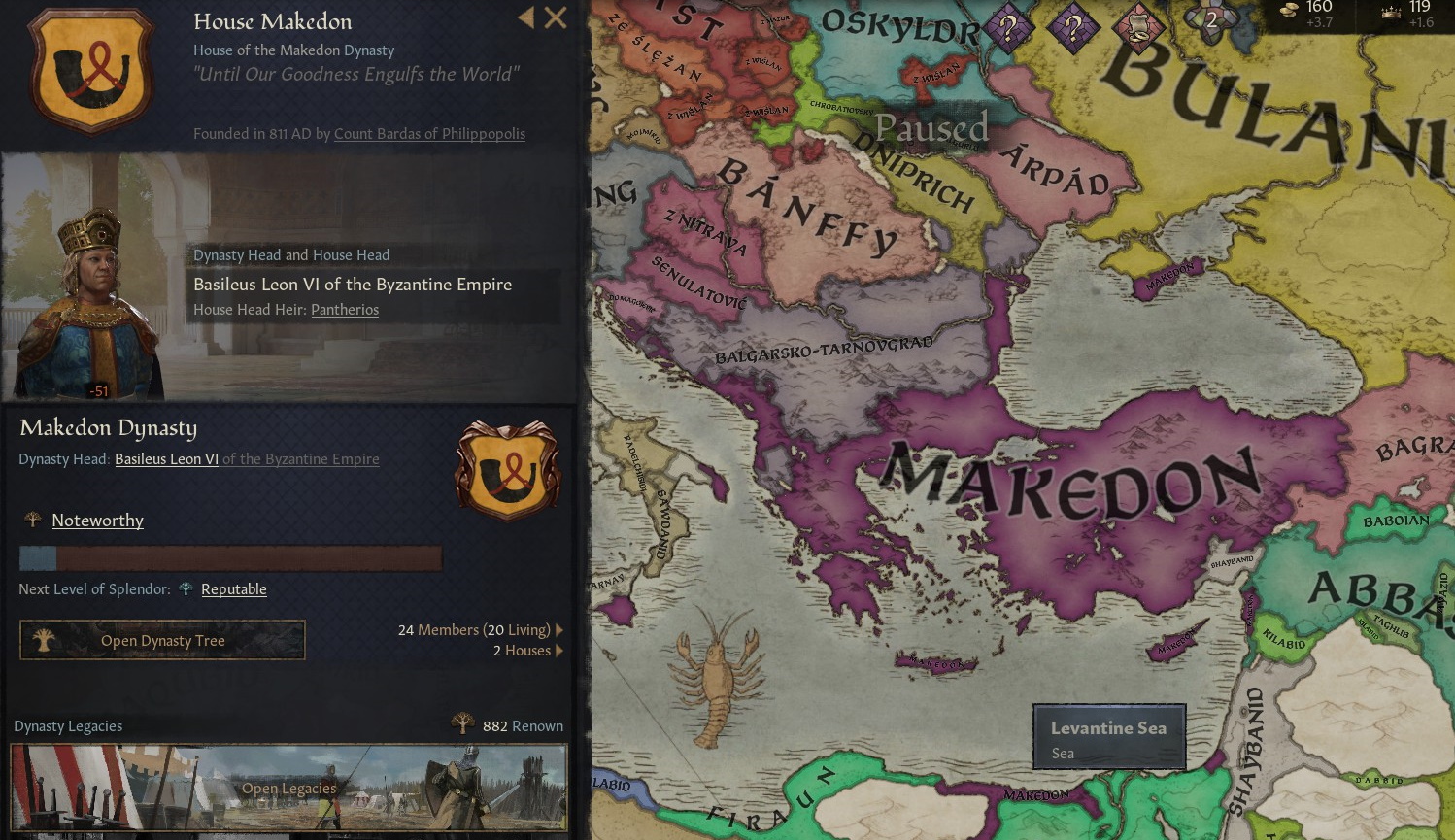 The Norse house of Hæsteining, rulers of Lancaster and North Riding, doing great work for Viking stereotypes, seize the Terrifying Things To Hear In A Library award for “With The Sword, I Seek Learning”, and possibly attempt to eat and/or have sex with it. 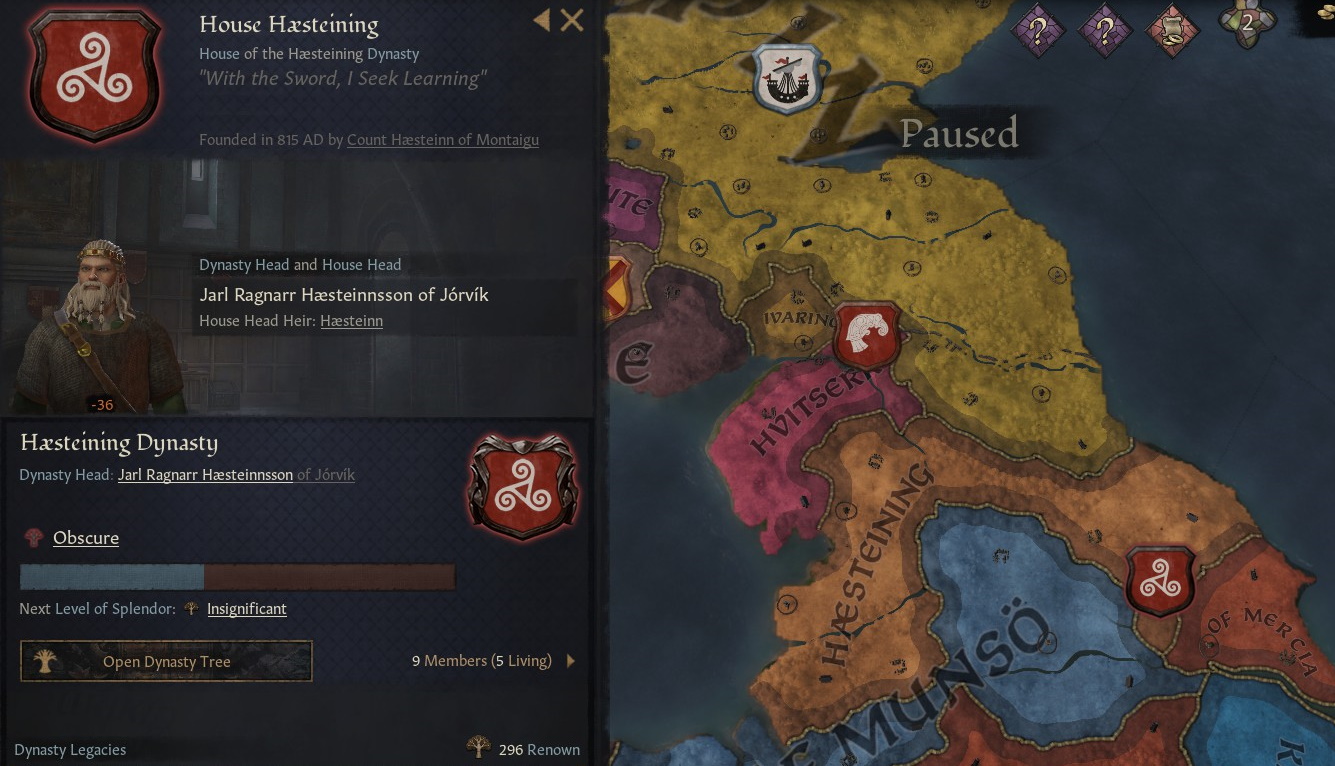 The put-upon House Dêqên, a tiny house squished into a Southeastern tip of Tibet, take home the Spirit of 2020 award and my sympathies for the audibly exhausted “One After Another”. 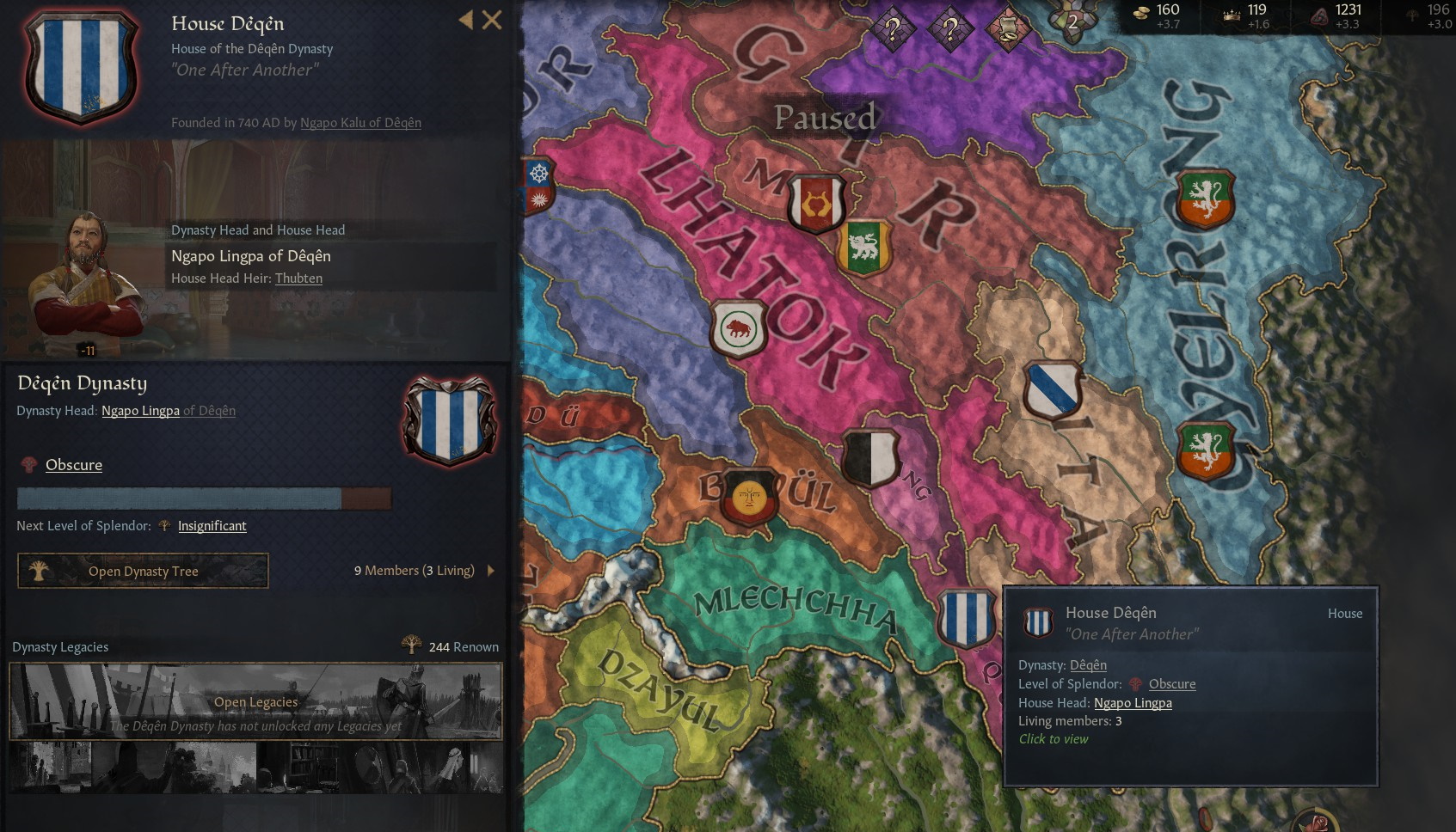 Mottos for the neighouring houses include “Typical”, “When Does It End”, and “Oh God Just Put Me In A Coma”.

To their North, holding the tiny county of Lingtsang, House Ma have forced us to weld together the Most Metal award to the Goddd You’re So EMBARRASSING Mum one with the very nearly hardcore “Drink Your Blood, Daughter Of Ma”. 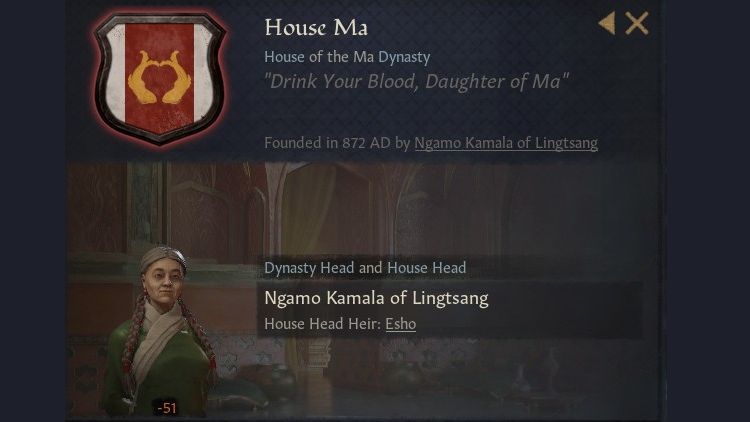 “If you kids don’t drink your blood I’ll turn this caravan around and there’ll be no pillaging for anyone.” 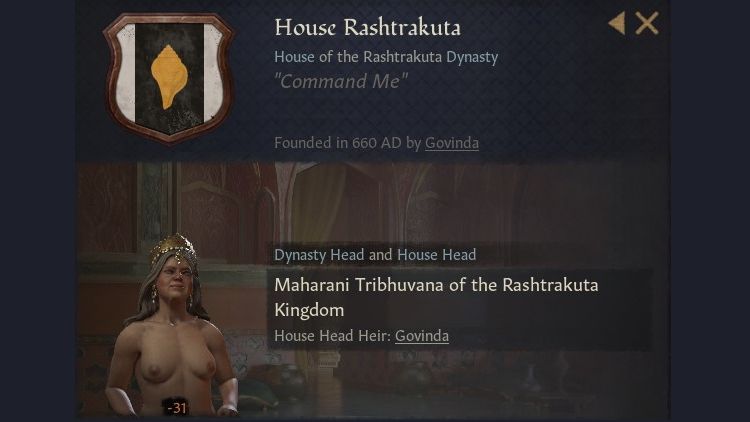 They are a dominant power of the region, which makes both more and less sense the longer you think about it.

Back West again, over at the strait of Bab-el-Mandeb, House Darod comfortably secures the Do Not Touch Willy award for “Irk Not The Ox”. I approve of this as my own house, the resplendent Oduduwa, goes with “The Spirit Of The Ox Grants Us Respect”, which I’ve just now realised leaves some ambiguity about whether others respect us because of the ox, or the ox itself respects us. Hmm. 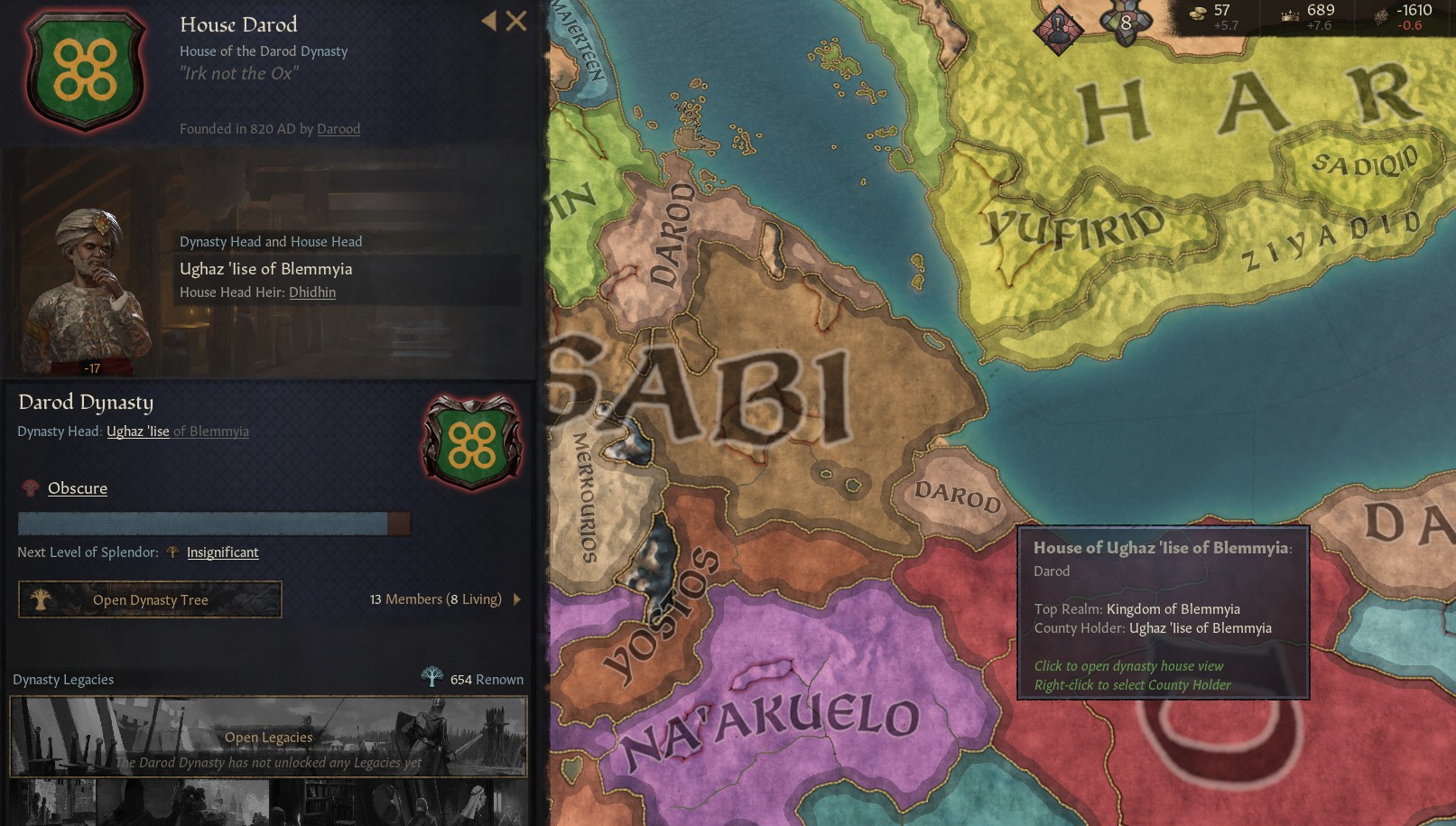 Maybe they should get a bonus award for using “irk” at all. That’s a hard word to make menacing.

That inspired me to look to my immediate East, where my Igbo neighbours, house Nri, win the I’m Helping! award for their adorable “I Help”. They should get some sort of bonus prize too, because they really do help me out several times. 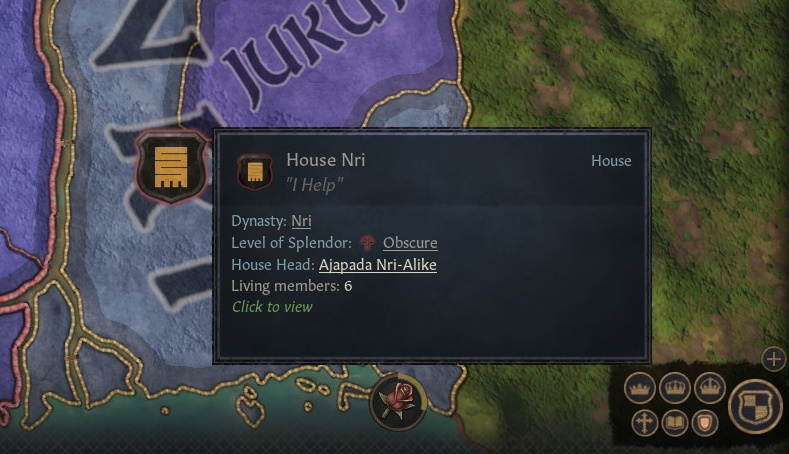 You can just picture them running up to a situation, yelling their motto, obliviously knocking over weaponstands, starting fires, and generally making everything worse.

Their neighbours, house Wukari, have chosen to characterise their entire dynasty as “Often Mourning, Seldom Rejoicing”, which earns them no award but a recommendation for a good counsellor and the overpowering urge to say “same”. Their leader, Galadima Zikenyu, has taken to eating his feelings after losing seven children. 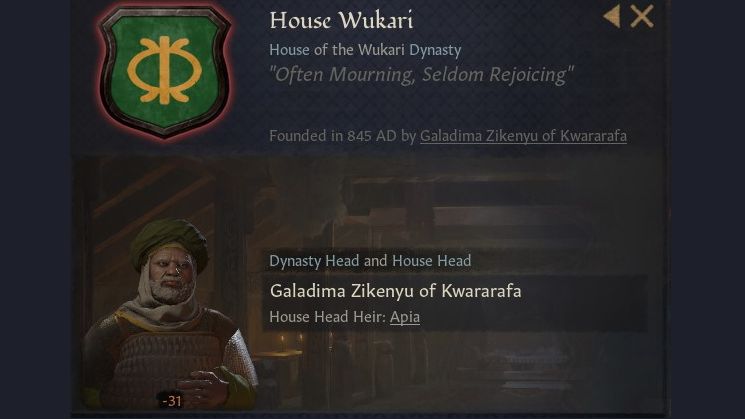 Well, now I’m too depressed to invade them.

That’s all from us tonight, folks! Thanks for joining us, and of course, thanks for all the houses, great, small, and weird, who took part. To vote for your favourite, send an emissary to Ilo, where our impartial council will gather up the scores and hurl them into the river.