I’ve been banging my head against the PAX X EGX demo for No Place For Bravery for a while now. It’s a very stylish action RPG where you, a warrior with adorable stick-thin legs holding up a big meaty-boi body, are out to rescue your daughter Leaf from grim monsters. You get to execute your enemies after defeating them, and lots of blood gets splashed all over the place. I like almost everything about it: the music is great, the animations are slick and cool, the art and design on the world is grim and gorgeous.

I like everything about it apart from the combat. Which is a bit of a problem for a game focused on combat, I suppose. And yet the rest of it is so good, I keep going back for more.

I am a big fan of games where you can look at them and know that everyone involved has a good idea of what it is. I like to be able to imagine, you know, a giant mood board taking up one entire wall of the office. No Place For Bravery definitely has that. Everything in it is working towards a certain No-Place-For-Bravery-ness.

The soundtrack is a thrumming, relentless hum driven along by a steady drum beat that quickens as you enter serious combat. It’s an excellent undercurrent as you play. Then you’ve got the monster design. Slightly inhuman humanoid forms, zombie-esque drones with teeth too big for their heads, giants with out-of-proportion limbs. Their animations before you execute them, where they’re on their knees in a pool of their own blood, are really excellent: teeth-gnashing, lung-shaking, whole-body-trembling ragged breaths as they wait for death. Which, obviously, they will receive at my mighty hand.

The world itself is gorgeous and weird too. Your once-idyllic land is corrupted by a kind of creeping, organic… something. You find bridges held together by what look like sinew. Huge geometric blocks of stone look like they’re growing flesh. There’s obviously some weird kind of lore or historical blight at play here, and I want to know more about it.

But the combat is my current sticking point. It uses a melange of ingredients I mostly like – health bar, stamina bar, and a (for want of a better term) poise bar like wot you get in Sekiro. You can break your enemies’ poise by blocking or parrying at the right time, but you can also get yours broken by blocking too much, or attacking a blocking opponent. That way, staggering and death lies. 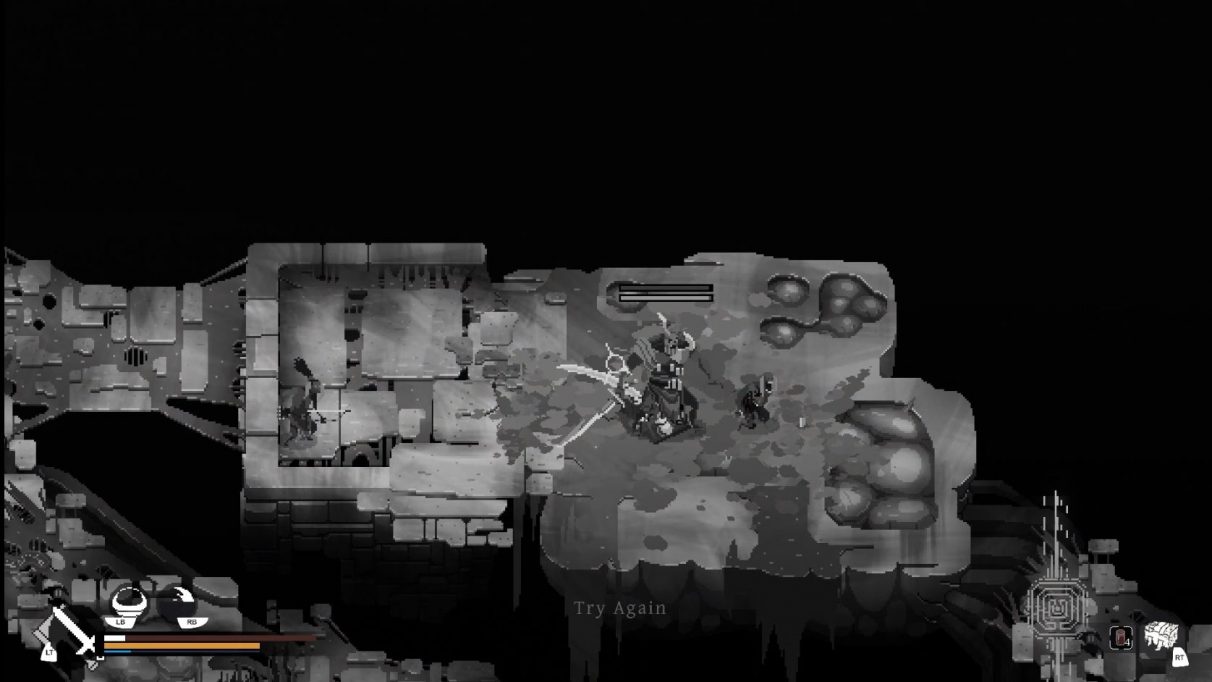 Try Again is the You Died of No Place For Bravery

Along with your regular attack, you’ve got a couple of special attacks that deplete more stamina than normal, and a dash, plus an inventory of consumables (including throwing knives and healing spells). If you die you reset at the last flaming sword stuck in the ground you prayed at. This resets enemies and your inventory, but refreshes your supply of four health potions. Ah, influences.

My problem is mostly with the controls. They feel a bit sticky. Your enemies move fast, but stick-leg hero Thorn responds to my demands a gnats whisker too slowly. Even when I want him to chug a potion, it takes a couple of goes to make him actually do it. It is frustrating – more than the inbuilt frustration you get with games like this.

The wide view the camera takes is also a tricksy cow, because there is often a lot going on at once, so you split your attention. This is, I am sure, a feature not a bug, but it still threw me off a lot. As an example, here is a supercut of my failed attempts at an early miniboss, backed up by one (1) ranged attacker and 1 (one) melee attacker. It took me bloody ages.

It’s hard not to get defensive about tough-as-nails action games where ‘this is difficult’ is one of the selling points. I’m the first to admit that I’m never going to be able to get a no-hit perfect speedrun of Dark Souls under my belt, but I’m also generally alright at games.

As you can see, I eventually triumph when I stop getting frustrated and start treating the name of the game as an imperative rather than merely a pithy title. I slow down, run away a lot, and eventually break the enemy poise.

At the moment, I am still playing the demo but in the way a smoker trying to quit keeps going back to cigarettes. I play it for a bit, get annoyed at a tough fight, turn it off, and then immediately light it up again going “Coo, but it’s a bit sexy, isn’t it?”. I don’t think the combat is bad, but I do think it needs a little tweaking. Just a little tweaking of the controls in favour of poor Thorn. His legs are so tiny, give the guy a break.

Luckily, the demo is free on Steam right now, so you can go away, play it, and come back to tell me I’m wrong, can’t you?

More about No Place for Bravery

Fantastical action-RPG No Place For Bravery is out early next year, gets blood all over its trailer

I Like Big Gods: No Place For Bravery Announced