If you’re short on upgrade materials in Destiny 2, you fancy building a stockpile ahead of the new expansion, or you just enjoy a challenge, this week has a fun opportunity to farm for huge rewards. The Lake Of Shadows mission is giving double rewards in Nightfall: The Ordeal mode until Tuesday, and I recommend having a go on a high difficult level. Lake cranked up to Grandmaster turns Destiny into a tactical shooter, requiring careful, planning, coordination, and execution or even a small fight will get you murdered, which is a lot more fun than it sounds. Scoring loads of Ascendant Shards and Exotic items is just gravy.

Nightfalls did drop double rewards earlier in the season, but that was a bug Bungie soon fixed. This time, it’s on purpose. Whatever difficulty level you play this week’s Nightfall: The Ordeal mission on, you will get double rewards for your rating at the end. On low difficulty levels, this might mean an extra Enhancement Prism or two. On high levels, you could be swimming in Prisms, Ascendant Shards, and Exotic items. I think this is a timely opportunity to push into Grandmaster difficulty, if you haven’t already.

Grandmaster is the highest level of Nightfall: The Ordeal, filling the mission with so many modifiers that Bungie trim descriptions yet you still have to scroll down to see them all. The minimum Power level is 1075, and everyone hits like a truck. Loads of enemies are replaced with Unstoppable and Overload Champions chasing you down. You need to earn extra revive tokens by killing Champions, and you have to start over if your whole fireteam dies. You have no radar. Enemies have extra shields, and you barely tickle shields unless you hit them with matching elemental damage. You can’t change your loadout mid-mission. The Taken pushportals boop you a long way. Enemies spawn blight zones when they die. All this, and more! 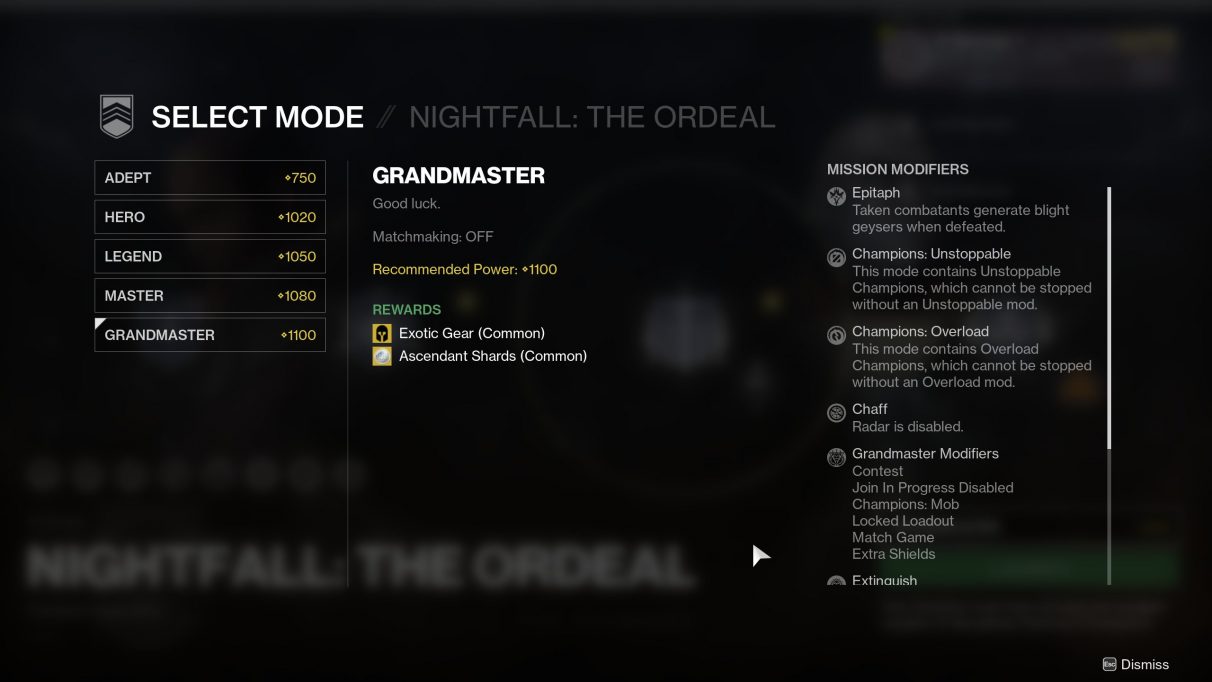 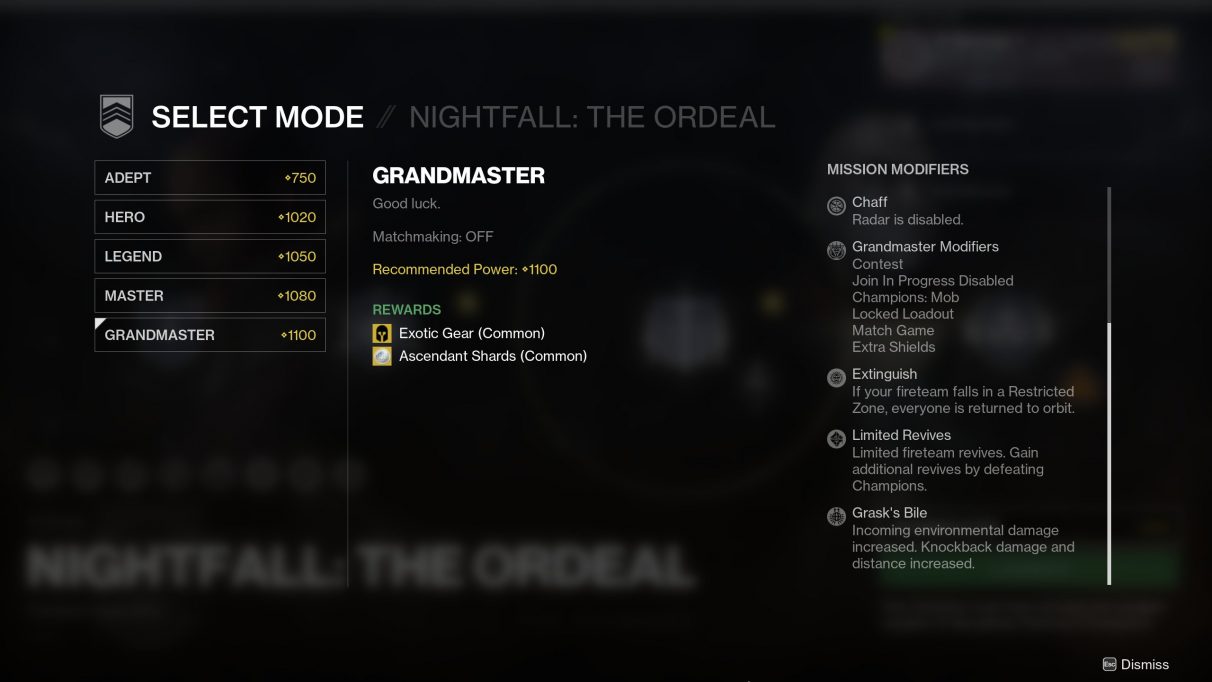 Sounds punishing, and it is. But that pushes Grandmaster Lake past frustrating and into a whole new way to play. If you blithely aggro enemies, you probably will die. If you don’t pick coordinate loadouts with your team, you probably will die. But if you treat every cluster of enemies as death and plan how to tackle each, calling your targets and counting down to coordinate shots, it’s great fun. I ran Grandmaster Lake a few times earlier this season and was weirdly reminded of Rainbow 6, breaching and clearing rooms as spacewizards.

Most of Destiny’s PvE lets you bumble through with whatever and still be fine. Dungeons and Raids do require teamwork but that difficulty is focused more on completing puzzles and boss mechanics while under fire. With Grandmaster Lake, the difficulty is in executing a plan to shoot enemies dead before they get you. Not much else in Destiny offers that. I dig it.

I really do recommend getting a squad together and trying it on as high a difficulty as you can. Lake Of Shadows is short and easy as Nightfalls go (some of the other GMs are just horrible, lookin’ at you Savathûn’s Song), and the rewards are a nice bonus. It is unfortunate that Destiny’s boring Power grind means many people won’t be at 1075 to even try it. But hey, celebrated vidman “Datto” demonstrated last month that you don’t need the hot Exotic, Pinnacle, or Ritual weapons to do GM Lake: