Starstruck: Hands Of Time is a cutesy adventure game about going back in time to help some kids save the world.

No, that’s not right.

Starstruck is a rhythm-action game about a guitarist trying to make it big.

No, no. Starstruck is a silly rampage game about taking control of a giant hand as it smashes up little model neighbourhoods. Wait, it’s actually a slightly dark story about a boy struggling to be more like someone he admires without losing his identity. No it’s about playing with your toys and being sad that they were damaged. No, no. 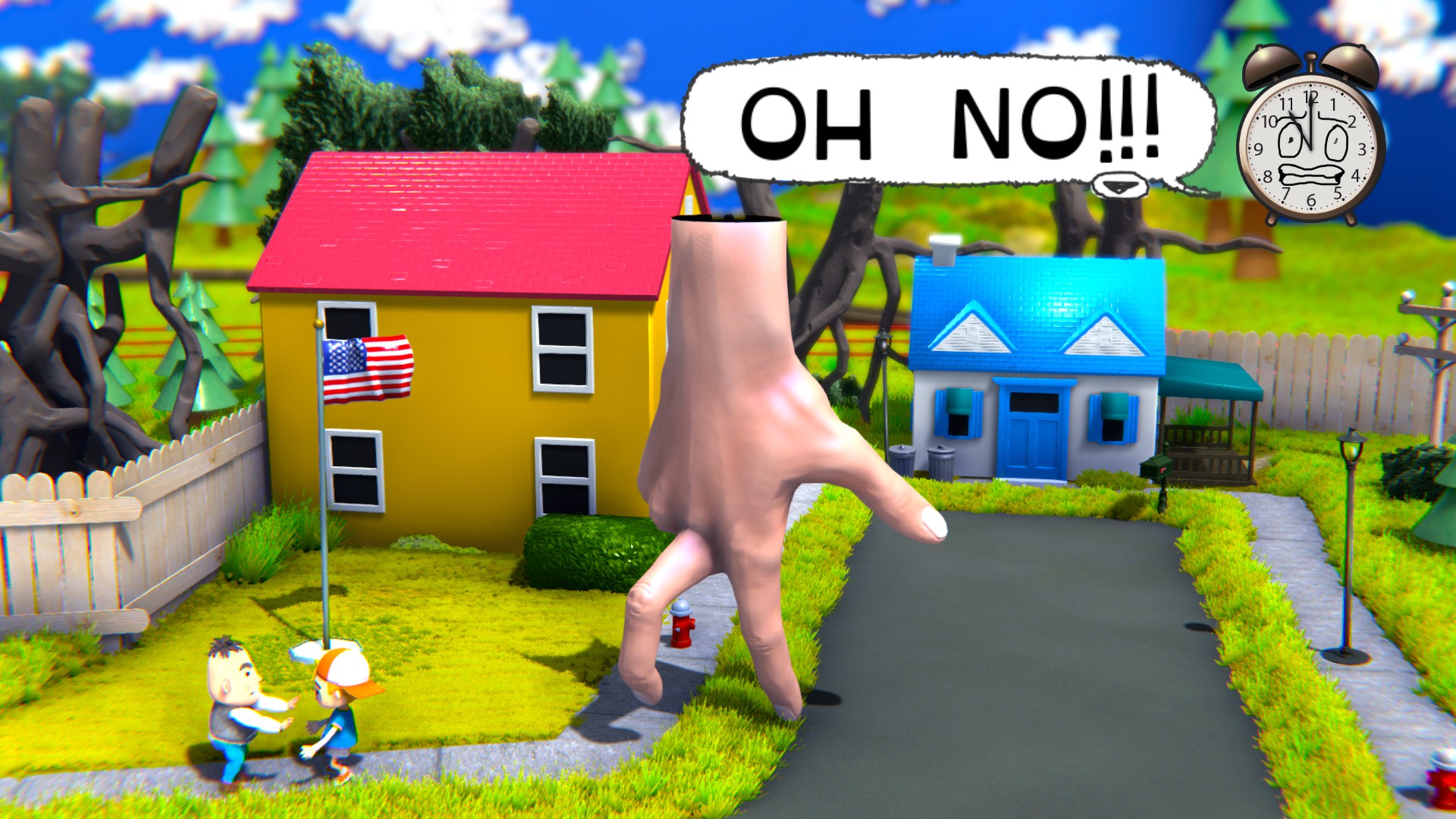 You play as a human, at least. Character creation means picking a size and skin tone for your hands, since you operate your shipboard operating system with those hands, visible from your (static) first person perspective inside the cockpit. Their fingers move a dinky little thumbstick when you navigate menus. It’s strangely cute. That operating system is primarily a framing device through which you remotely watch a handful of kids… uh. Let me qualify that.

You’ve gone back in time, in your spaceship, to help someone prevent a terrible apocalypse caused by ‘the Mold’. Crucial to this is one individual, who your cute but thankfully not too over-the-top about it ship’s AI has identified as a kid called Edwin. I say “kid” as the exact age of him and his friends is unclear. Edwin has an unruly lock of blonde hair and the legally necessary backwards baseball cap, and his friends have to sneak out of their houses. But they also break into an abandoned building to hold a concert with their band, and one of them is put in prison, so who knows. 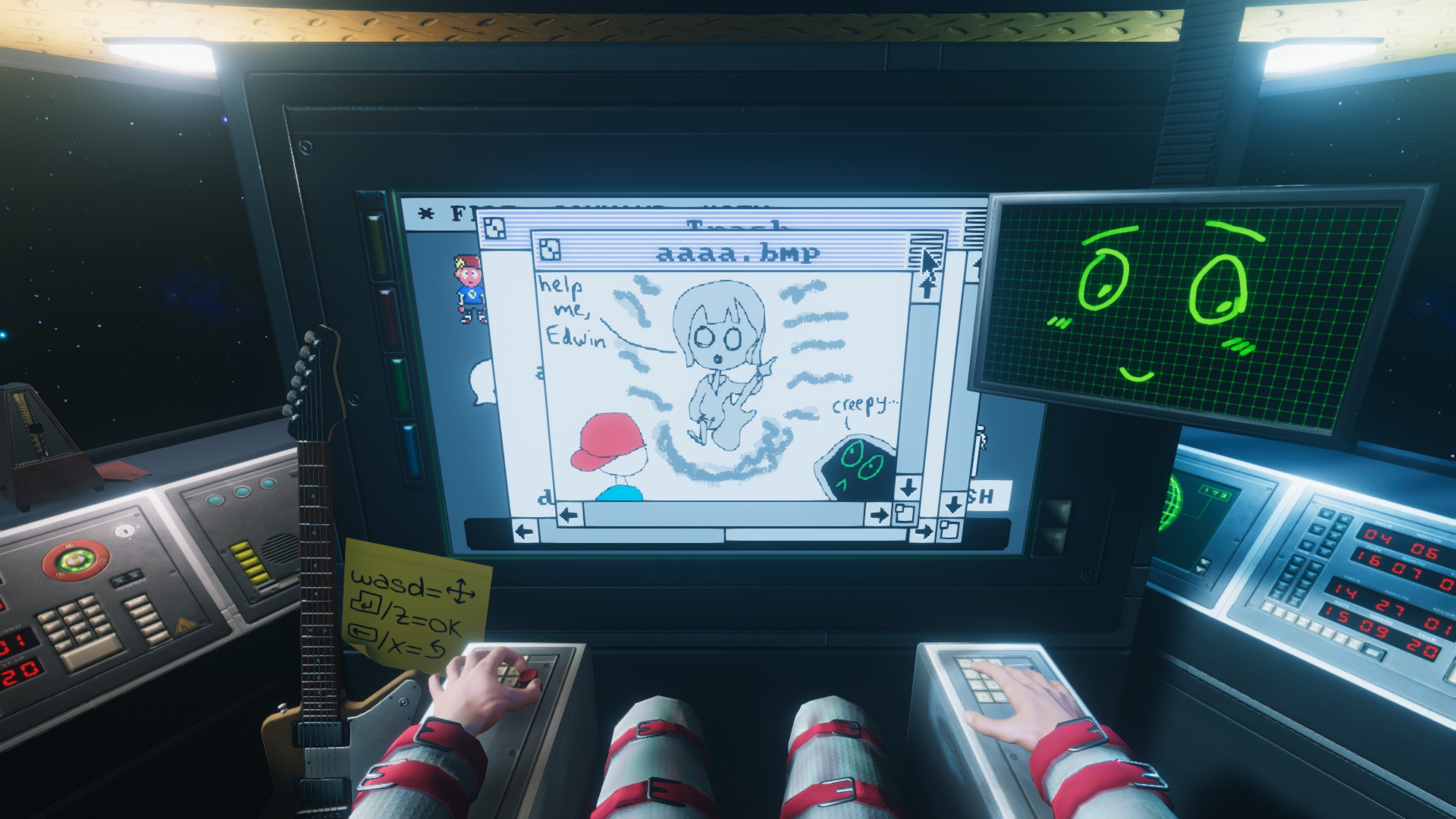 You take direct control of Edwin, and later at least one of his friends, and walk them around their strange little town in an adventure game fashion. You can knock on doors and talk to people for little tips, and attempt to rifle through bins, which Edwin refuses to do because it’s obviously pointless, but the narrator will cheerfully foreshadow that it’s not. Initially, to be honest, I thought it might be Not My Thing. Another cute and friendly adventure game with a little bit of oddness and fourth wall tapping. Perfectly fine and all, but it didn’t grab me.

Then I reached a barrier made of huge nails, and the game zoomed back out to my ship, where the AI told me there was nothing for it but to smash the town up with my giant hand. With this done, Edwin was able to climb on stage with his friend and now my job was to carry him through a song in classic Guitar Hero fashion (with a couple of slight complications). Later, I had to challenge some sort of malevolent ghost to a rock-off to save my friend after he’d been turned into a statue of my other friend. And then it got weird. Yeah, then it got weird. 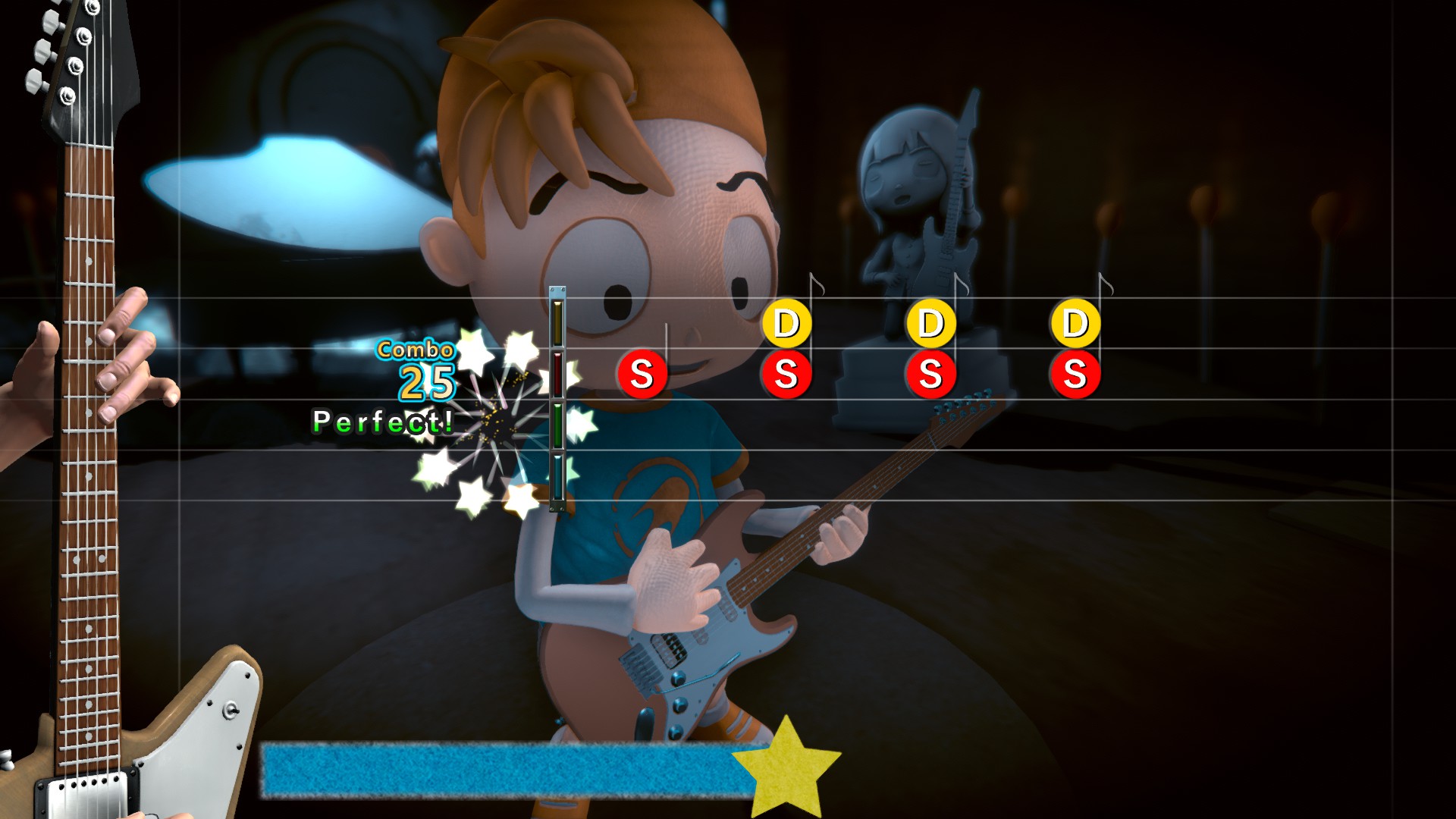 Having to actively think about where each letter on a keyboard is completely messes up my typing skills.

Why are the trees like old fashioned Lego or model railway ones? Why does the local cop only ever open doors by dramatically kicking them open? What in the world is going on with that piano ghost or the steam frog? How seriously should I be taking the bit where Edwin dreams that he melts? Why am I playing a cardboard guitar and hang on, wasn’t there supposed to be an apocalypse coming? I do not know. And I like it.

At this stage, I think I can guess at least one of the coming story reveals, but it’s not clear exactly where Starstruck is going. I wouldn’t be surprised if it retains its varied tone. It’s definitely a strength. Juggling light-hearted meta jokes with sinister nightmare sequences and a mildly kawaii robot pal is harder than it looks, and Starstruck’s prologue pulls it off well. It avoids feeling contradictory by leaning on its overriding sense of playfulness.

The lyrics suddenly being in English rather than a slightly distorted dialect of Simlish is mildly jarring, but I really dig the semi-parodical music video bits, and I was even getting into the tunes once I’d got the hang of the controls a bit. There are a few parts too where you can freestyle, and play any notes you like, as long as they’re on the beat or half-beat, a welcome reminder of the sublime Floor Kids.

Starstruck: Hands Of Time is expected out on Steam sometime in 2021. You can play its Prologue now, for free.