I don’t like spiders. Ever since I watched a documentary on TV about the leggy nasties lurking in the rainforest when I was but a high-pitched, impressionable Ed, I’ve become one of those people who scrambles for a paper and cup when a spider’s lurking about. So yes, arachnids raise my blood pressure. Every now and again I consider getting one of those cowardly spider catcher sticks, those hairy tweezers that allow you to pluck spiders from afar and deposit them elsewhere.

Kill It With Fire actually came out a couple of weeks ago, but it’s one of a bunch of games that publisher tinyBuild brought to showcase at PAX X EGX, and I decided to push my personal limits by playing it. I was surprised to find my time with Kill It With Fire quite liberating, albeit worryingly so. I wasn’t afraid of the spiders at all. Instead I’d become a virtual eradicator of the eight legged kind. Cold, ruthless, a bit Terminator. And I kind of – who am I kidding? I enjoyed it immensely.

In Kill It With Fire the premise is simple: you are in a house and you must eliminate all the spiders using whatever means necessary. There is a real thrill to stalking each room, moving through these perfectly mundane settings and listening out for the squeak of a spider. As absurd as it sounds, I enjoy lifting books off shelves and slowly rotating them in my hands, or carefully, methodically opening drawers with a revolver cocked and at the ready. It’s like I’m taunting them, teasing them. I have the power.

Not only over the spiders, but over the house too. My primary concern is to eliminate spiders, and if the house erupts in flames then so be it. Right at the start of the demo you’ll get a clipboard that displays objectives, like “Kill 2 spiders” and “Smash 10 Picture Frames”, which also helpfully doubles as a nice weapon to crush your targets with.

It’s not long before you’re wielding bricks of C4 and torching entire bedrooms to weed out the critters, though. I’m fond of the way the game actively encourages chaos by innocently placing ridiculous weapons in cabinets and cardboard boxes. “Ah yes, a set of shurikens is not silly at all, but a totally normal way of dealing with an infestation.” 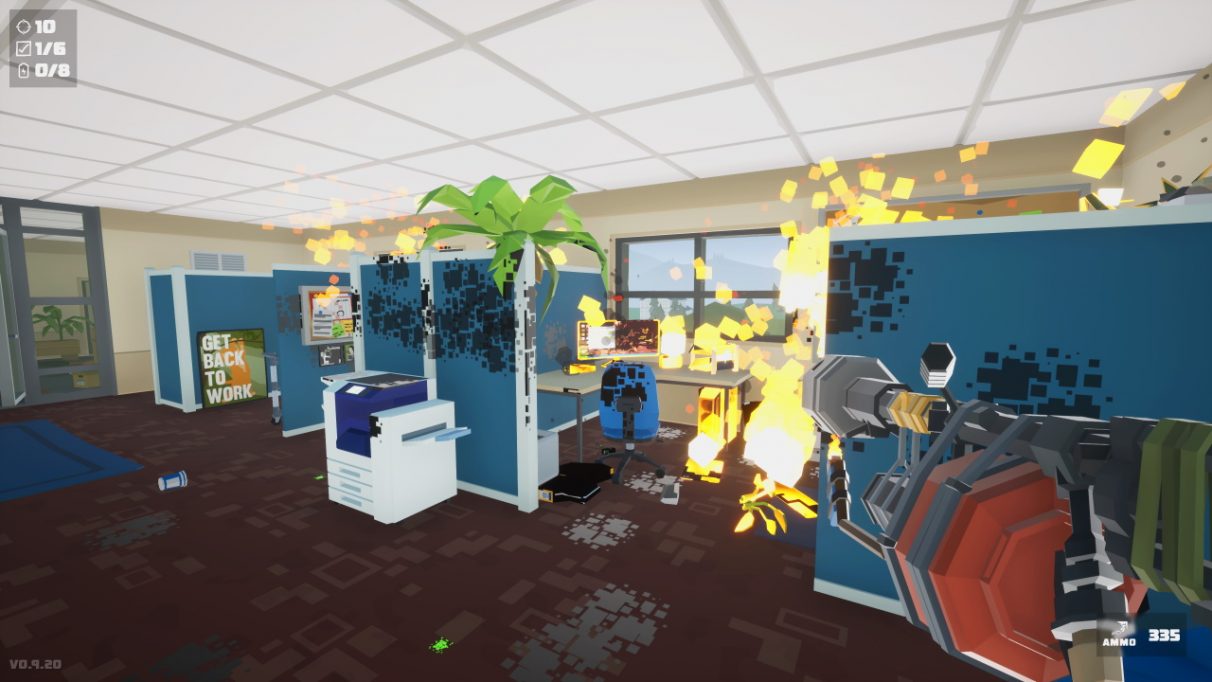 As you progress, you’ll find houses become more intricate and the objectives list grows to match it. Some drawers are locked until you take out however many spiders. Pick up a remote and a secret door might whirr to life. Sure, you aren’t going to get deep lore on the house’s residents (like an explanation as to why they have so many shurikens), but you are going to earn yourself a new, hilarious way of getting the job done. And what’s the job? Yeah, that’s right – killing spiders.

I want more. In this pixel universe I hold power over the arachnids. If you’d also like to wield it too, and potentially frighten yourself, it’s available on Steam, Humble and The Epic Games Store for £11.40/$15/€12.50.

[A defence of spiders and why they’re great pals that should be left alone can probably be found somewhere on Nate Crowley’s Twitter – ed.]