Nvidia’s RTX 3080 is here. Launching today, Thursday September 17th, at 6am PT / 2pm BST, the RTX 3080 is the first Nvidia Ampere GPU to be released in 2020, and we’ve gathered together everything you need to know about it, including what time it goes on sale, where you can buy one, how much it’s going to cost, and its specs and benchmark figures. Our full RTX 3080 review isn’t quite ready yet – it still needs a bit more time in the benchmark oven – but I’ll update this piece with more benchmark results as soon as I can.

Nvidia offically unveiled the RTX 3080, along with the RTX 3070 and RTX 3090 on September 1st during their RTX 3000 series launch event, and we’ve finally reached its official release day. If you’re itching to get your hands on one, then get ready to click that buy button at 6am PT / 2pm BST, as that’s the time it will go on sale according to a tweet from US retailer Newegg. Below, you’ll find everything you need to know about where to buy an RTX 3080, as well as how much it costs and what its specs are.

The RTX 3080 launched worldwide on September 17th, making it the first Ampere GPU to go on sale. This is the date when you’ll be able to buy both the Nvidia Founders Edition of the RTX 3080, as well as third party cards from the manufacturers such as Asus, Gigabyte, MSI, Zotac, Palit and more, and its release time is 6am PT / 2pm BST. 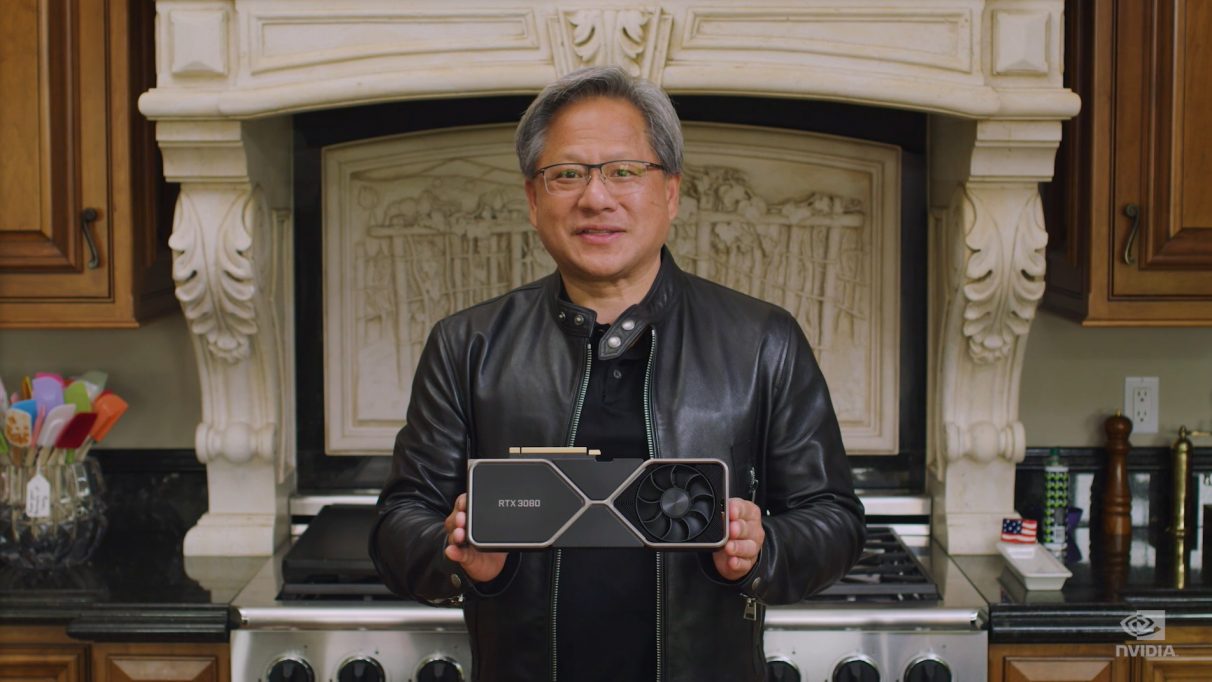 The Nvidia Founders Edition of the RTX 3080 costs £649 in the UK, and $699 in the US, which is the same launch price as the RTX 2080 Super. Third party versions of the RTX 3080 cost roughly the same amount of money, but many will be more expensive ones depending how much they’ve been factory overclocked.

Remember, anyone who buys an RTX 3080 between September 17th and October 29th will also get a free copy of Watch Dogs Legion and a year’s subscription to GeForce Now.

The RTX 3080 goes on sale at 6am PT / 2pm BST, and below we’ve gathered together as many retailers as we can find who are selling the RTX 3080. I’ll be updating this list as and when more retailers come through, as well as where you can find the cheapest RTX 3080 prices. In the UK, you can buy one from the following retailers:

So far, the cheapest RTX 3080 graphics cards from third party manufacturers appear to be:

Several sites are either down or out of stock right now. Ebuyer in the UK is currently letting you pre-order RTX 3080 graphics cards, and the ones with the earliest availability are:

Overclockers UK have also got pre-orders in place due to low stock levels, and these are the ones you can get soonest:

B&H Photo were also selling the MSI GeForce RTX 3080 Gaming X Trio for just $696 at time of writing, coming in a little under its usual $700, but the site is currently down.

Nvidia claim that the RTX 3080 is twice as fast as the outgoing RTX 2080, and you can sort of see why from its official specs. Nvidia haven’t released all of the RTX 3080 specs just yet, such as the memory speed or memory bandwidth, but I’ve listed the key specs they have announced below. It has more than double the number of CUDA cores as the RTX 2080, and it also has more memory, too – 10GB of the faster GDDR6X variety rather than 8GB of regular GDDR6. 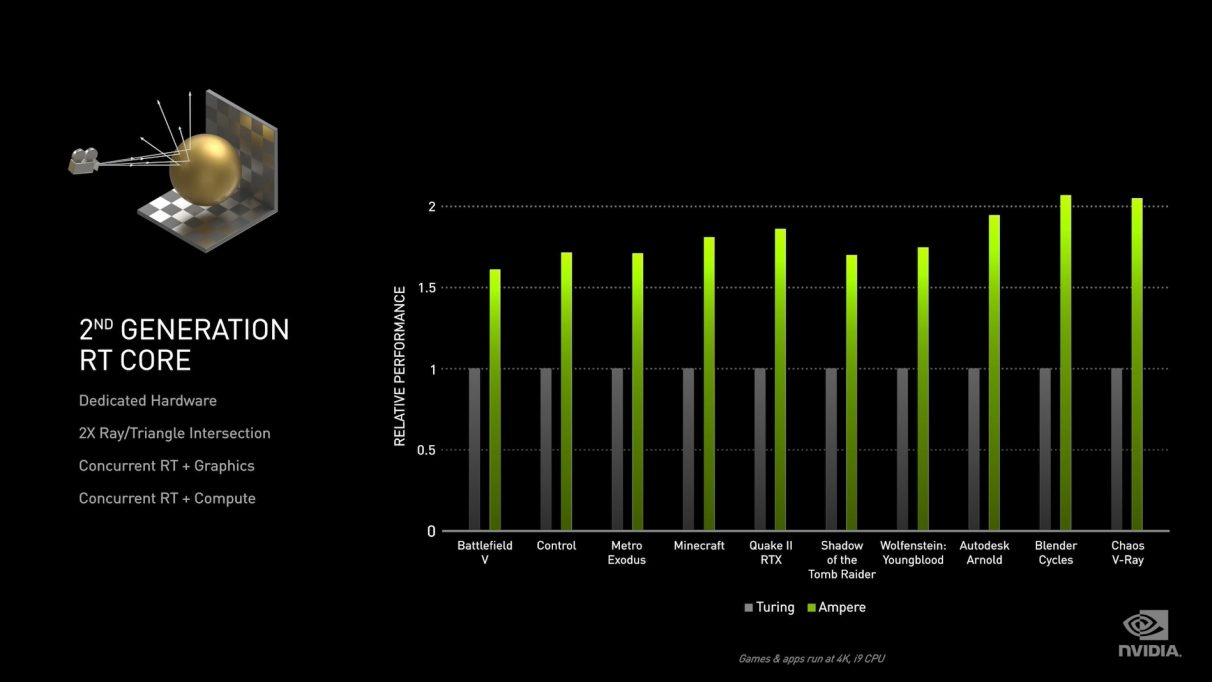 This graph shows how Ampere’s ray tracing performance compares to Turing as a whole, but the figures aren’t particularly useful.

At the moment, all we have is a few leaked benchmarks that have made their way online. The first crop comes from leaked Geekbench 4 Open CL results and the synthetic Ashes Of The Singularity benchmark. The former show the RTX 3080 scoring in the region of 464-470K, which is quite a bit higher than the RTX 2080 Ti’s 340-370K scores. As for the AOTS benchmark results, the RTX 3080 reportedly, managed 88.3fps on the Crazy 4K preset, which is 2-3fps faster than some of the RTX 2080 Ti cards tested by the leaker.

For those after some proper leaked game benchmark results, a leaked benchmark video from Chinese site TecLab Bilibili provides the following results to give us a rough idea of just how much faster the RTX 3080 is compared to the RTX 2080 Super:

The same video also details the RTX 3080’s DLSS performance on a handful of games, too, the results of which I’ve included below.

Doom Eternal isn’t the most demanding game on the planet, admittedly, but it’s still a clear step up from Nvidia’s previous flagship graphics card, which need I remind you has cost well over a grand ever since it came out at the end of 2018. Here’s where Nvidia see the RTX 3080 in relation to their previous generation graphics cards, too:

You will, however, need a beefier power supply than the previous generation to cope with the RTX 3080’s raw power. Whereas the RTX 2080 recommended a 650W power supply, Nvidia have increased this to 750W for the RTX 3080. The Founders Edition of the RTX 3080 will also make use of Nvidia’s new 12-pin power connector, but the good news is that an adapter for this will be included in the box. Third party RTX 3080 cards, on the other hand, will simply require a regular 2x 8-pin power connector.

Those are the headline facts for the RTX 3080, and I’ll be updating this article with more information as it becomes available. In the meantime, you can read all about our favourite GPUs in our roundup of the best graphics cards, what games currently support ray tracing and DLSS, as well as find all the best current graphics card prices in our regularly updated graphics card deals hub.