I have only reached the void while drunk. I had been too conscious before then. I didn’t yet understand.

Post Void, I had thought, was about being fast. I was probably too old to ever be good at it. That never mattered even when I thought it was true, but it isn’t. Post Void is about letting the game take you.

Its hypnotic rhythms, its lurid colours, its cacophony of violence and strangled, somehow endlessly escalating guitars. There is a space in your mind between reflex and conscious decision, between panic and triumph. That is where Post Void is set, I think. It’s certainly where it takes me.

If not for The Bundle, this game would have been the best deal of the year. You should play it. 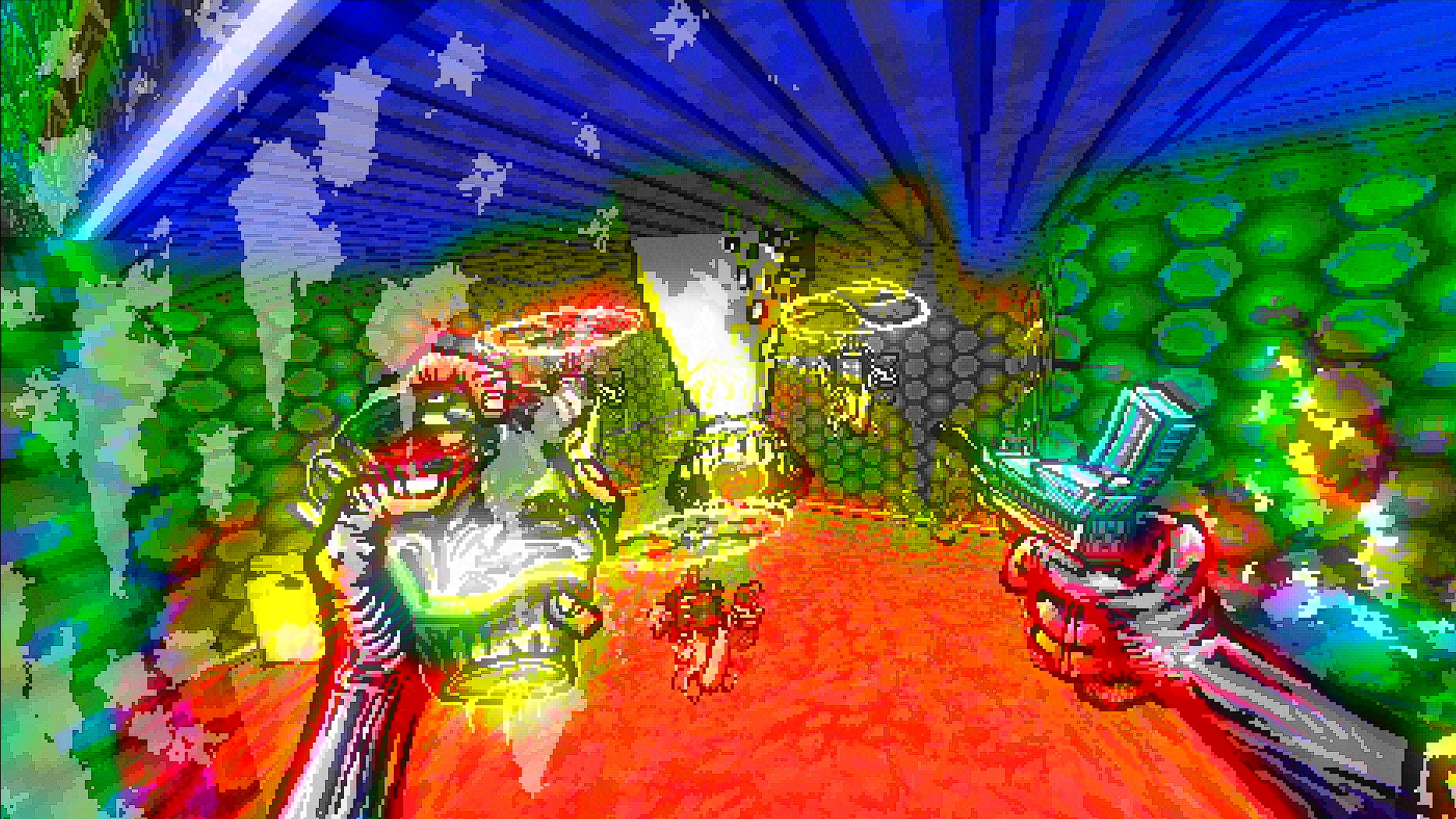 I have so many unusable stills. It is an orgiastic, potentially seizure-inducing explosion of lights. And when it takes hold, you can read it subconsciously like the code of the Matrix.

It’s a first-person shooter in which you race from a dripping pool of glowing energy, to another pool, dodging and killing monsters along the way. Each time you reach a pool, you get a choice of three random bonuses or alternative weapons. Faster reloads, say, or bouncing bullets, or a switch to the deceptively powerful knife. You might favour a compass that points to the exit, or a bigger idol, which is the little skull you hold in your left hand, constantly leaking its contents, the life essence that you replenish only by slaying others in your path.

Its four weapons are particularly transformative, but even your starting pistol is enough to see you through the whole game. Everything can be killed with a single shot, if accurate enough, and its hit detection is forgiving. It’s a huge part of its whole feel in fact, as it’s not about pixel-perfect aim but quickly and decisively aiming for about the right spot. It’s a game of instinct and intent rather than technical skill (although the latter helps, and you’ll quickly gain it), and though a little luck helps, be it getting the exact upgrades you wanted or getting lost at the wrong moment, it’s never made me feel hopeless, or cheated. 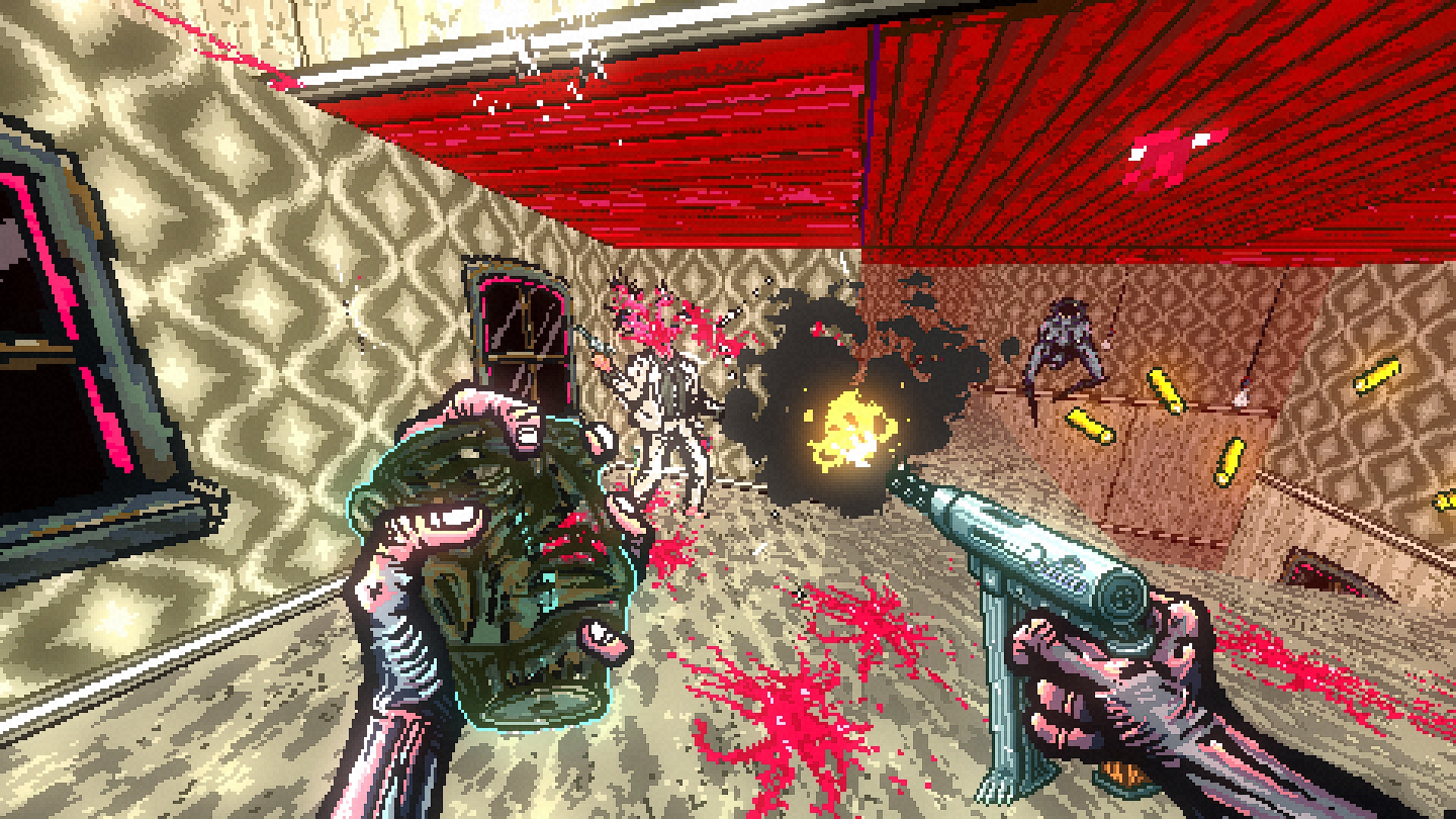 The uzi comes into its own with a couple of reload/capacity upgrades. It feels nice to fire near constantly, especially as monsters recoil when hit.

It’s difficult to talk about it without trying to remember what it does to your sense of time. Levels are far shorter than you realise, and even succesful runs through all its 11 levels will take under ten minutes. 2-5 minutes is a far more common play time. It has utterly consumed me for what feels like hours, but when I finally quit out, done for now, I realised it’s been barely half of one. I am very wary of games that completely occupy my attention, because I easily lose weeks of my life to them, but Post Void pulls me in, detonates a world around my head, then spits me out again, dazed, exhilerated, and very much done. But not feeling bad about it. And it’s incredibly easy, even after reaching the unrelenting rush of the later levels, to start right back up again without feeling like you’ve been downgraded. Each new run is another episode, the early levels not a chore or punishment, but an instant ‘replay all’ button. 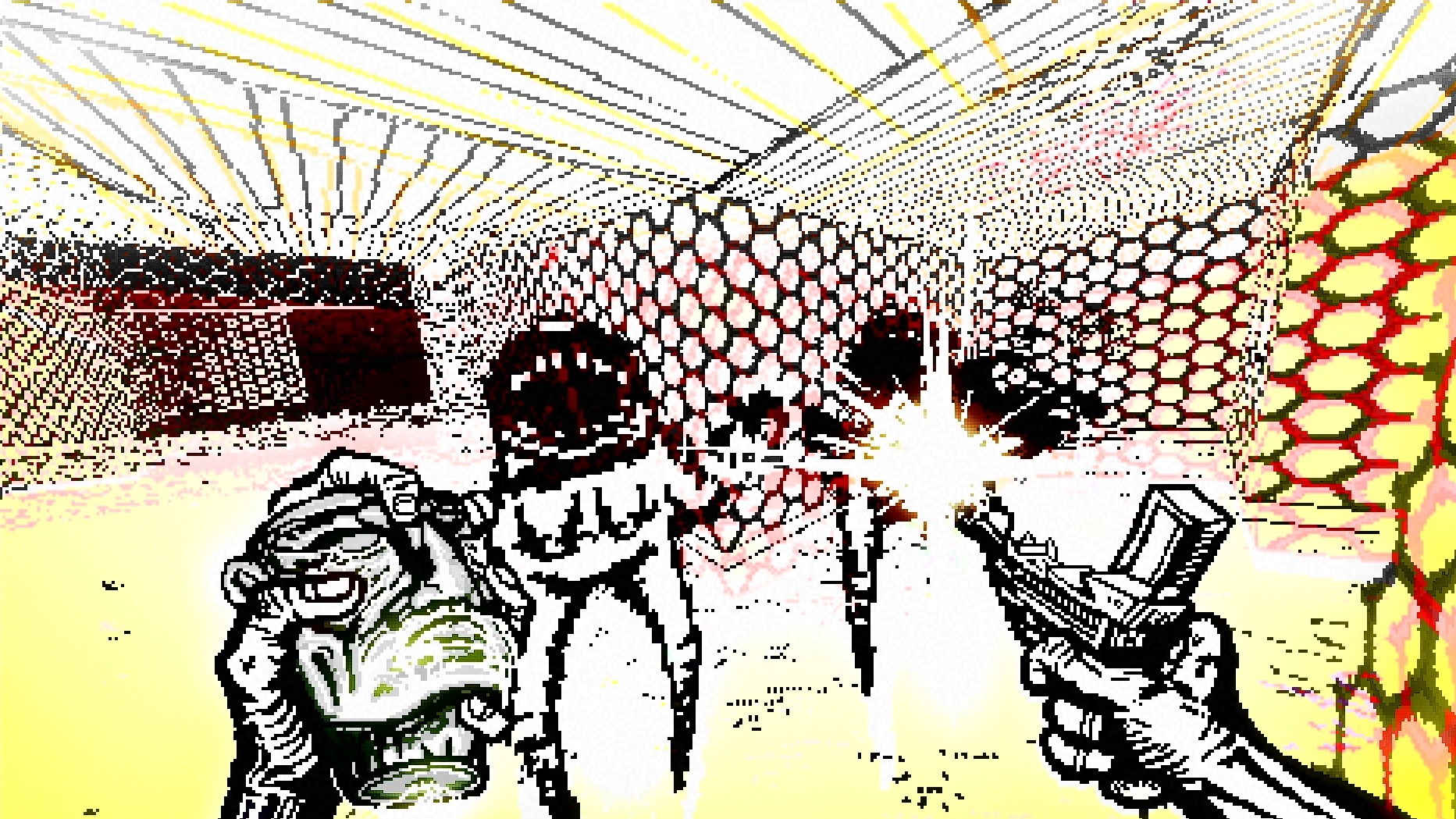 It feels somehow wrong to even share stills of the monsters. They should never be trapped in time like this. They ought to move even after death.

Most people would have made this into a “hardcore” game. A tiresome, obnoxiously hard and sadistic thing demanding perfection and punishing mistakes with instant death. But Post Void is forgiving. It invites you to be more accurate or efficient or untouchable, but the only thing it demands is speed. Your time is always running out. You must always move faster. Sometimes you’ll hit things at such point blank range that you might even have been behind them, having charged directly through them. Occasionally, especially later on, your sheer mental momentum will pull you almost involuntarily on to the next corridor without finishing every monster in the last room. It makes Sonic the Hedgehog look stilted and loiterous. 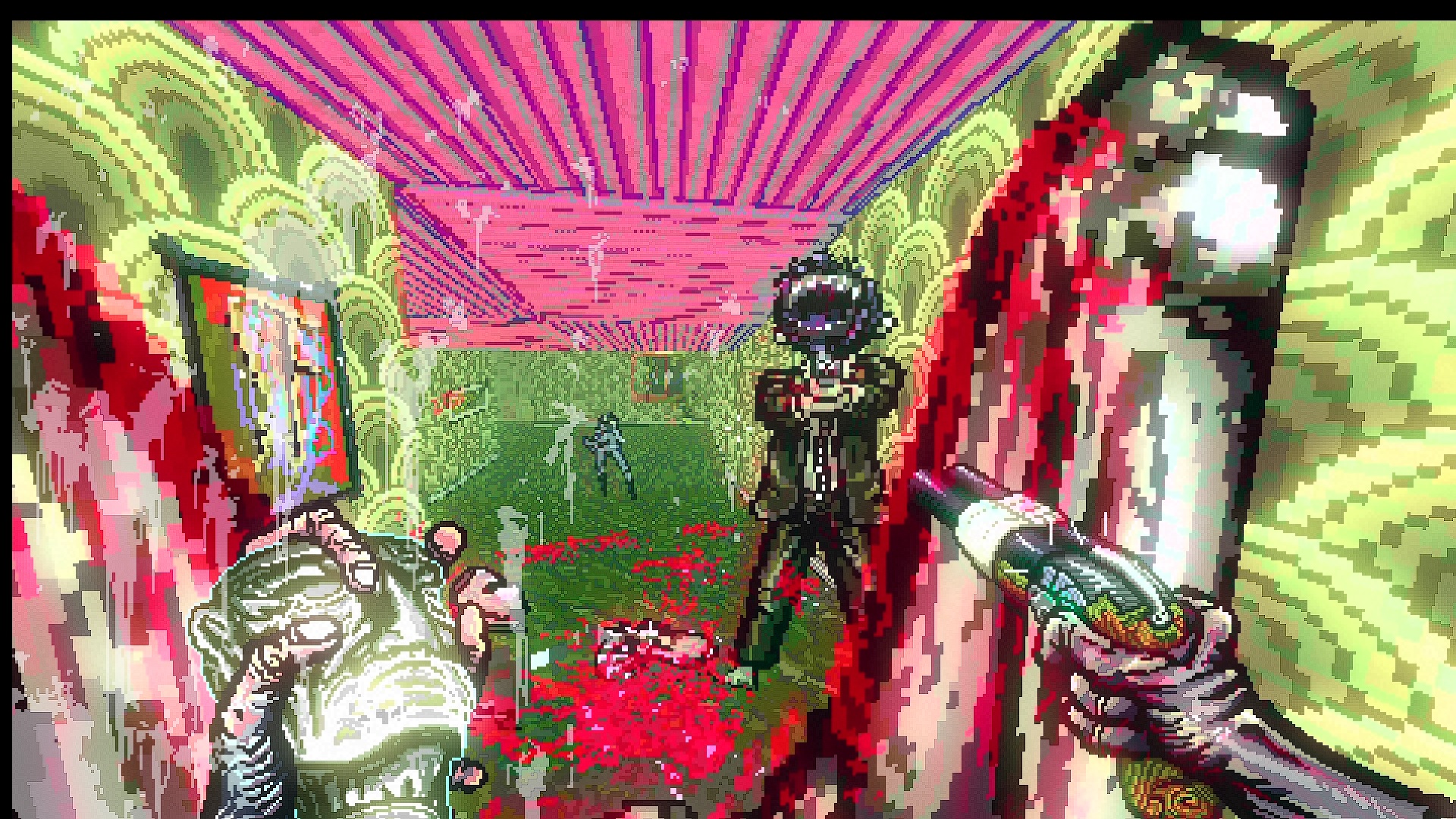 Stills make it look more unpleasant than it is. It’s all so frantic that the excess of the blood barely registers.

You could chase the high scores, the leaderboards, the ever-higher speeds. I’m fairly sure that the most useless-sounding upgrade, the one that makes you run very fast but only backwards, is key to this. Matt Cox (RPS in peace) got a higher score than me within an evening but I did it while drunk so clearly I’m better at it. But you don’t have to go for that. I’m sure part of my problem is that I take a lot of hits, but again, it’s forgiving enough that it’s not that important. Progress is progress. In my first post about it, I even thought that a bug, since fixed, was intentional – the pistol would reload after six shots, but only if you stopped firing, making it possible in a panicky moment to just keep shooting. I probably get fewer points for using the wonderful shotgun, and its room-clearing devastation, instead of the more precise pistol, the initially weak but more even tempered uzi, or the knife. 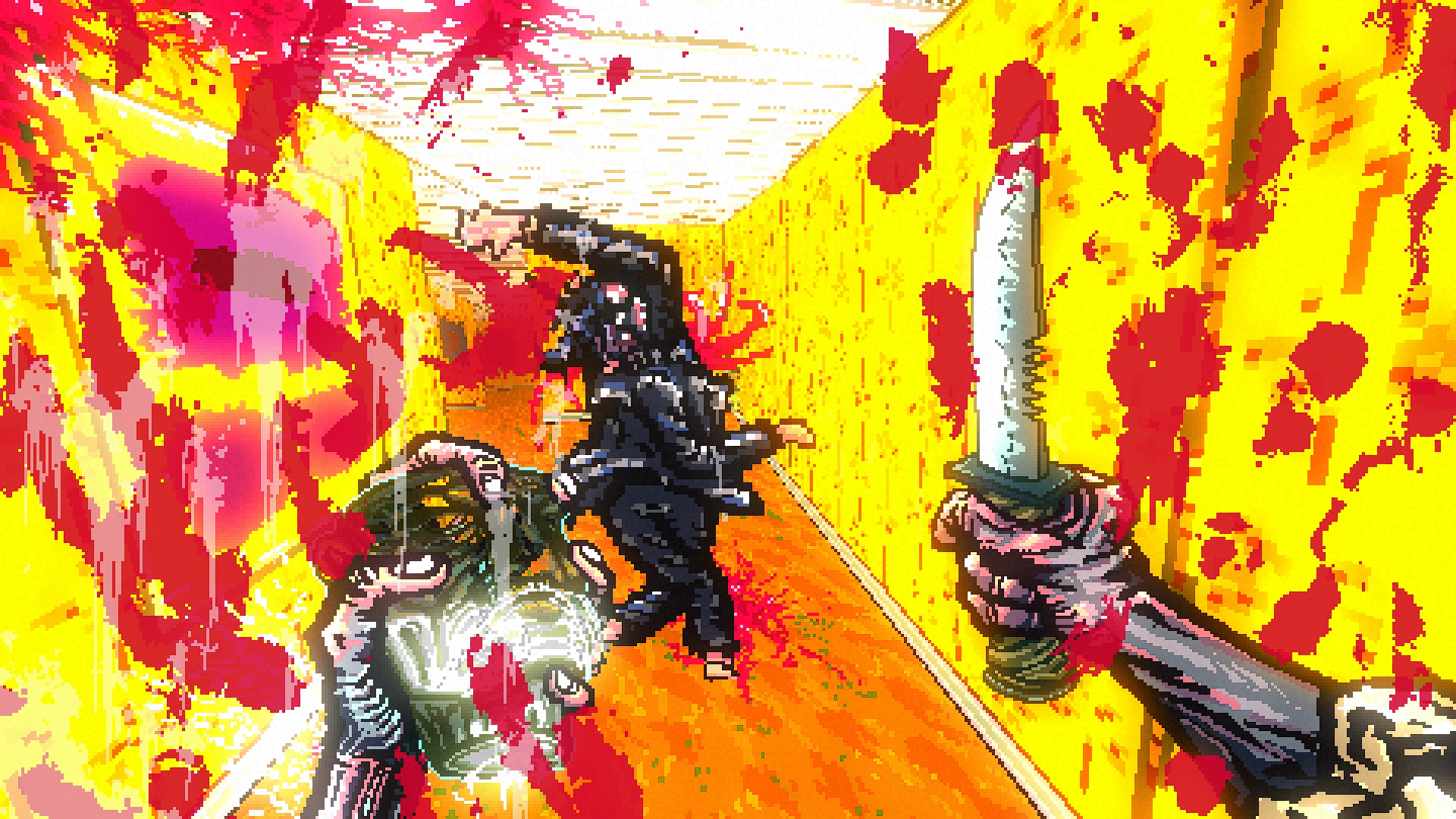 I love the knife. It took a while, I’ll admit, and it has its weaknesses, but my god. When I look back at the sheer savagery I’ve wrought upon its hideous, gaping-mawed monsters I should feel horrified. But despite the bursting tentaculer masses, the fleshy, moaning doorways, and the amount blood that sprays on the screen when you use the knife, its retro stylings and feverish mood give it an air of unreality that keeps it from feeling nasty. And frankly, when you’re caught up in a run, you’ll hardly register most of its details. I wasn’t even sure what some of its monsters looked like until I started recording videos (something I almost never do), despite having killed them in droves.

Sure, I remember the Reservoir Dogs-ish tentacly not-men in suits, and that they switch to Hotline Miami style white suits later. I remember some bitey things chasing me on tottering legs. There are flying manhack things, but they could look like anything. I am aware of what I’m doing, but only as I do it. The countdown – when you’re about to run out of time, when the idol is drooling out its last essence, you get a 3 second countdown on screen. You can get more time, even at the last second. Forget your mistakes. Make no plans. Just trust yourself, and keep going forward. 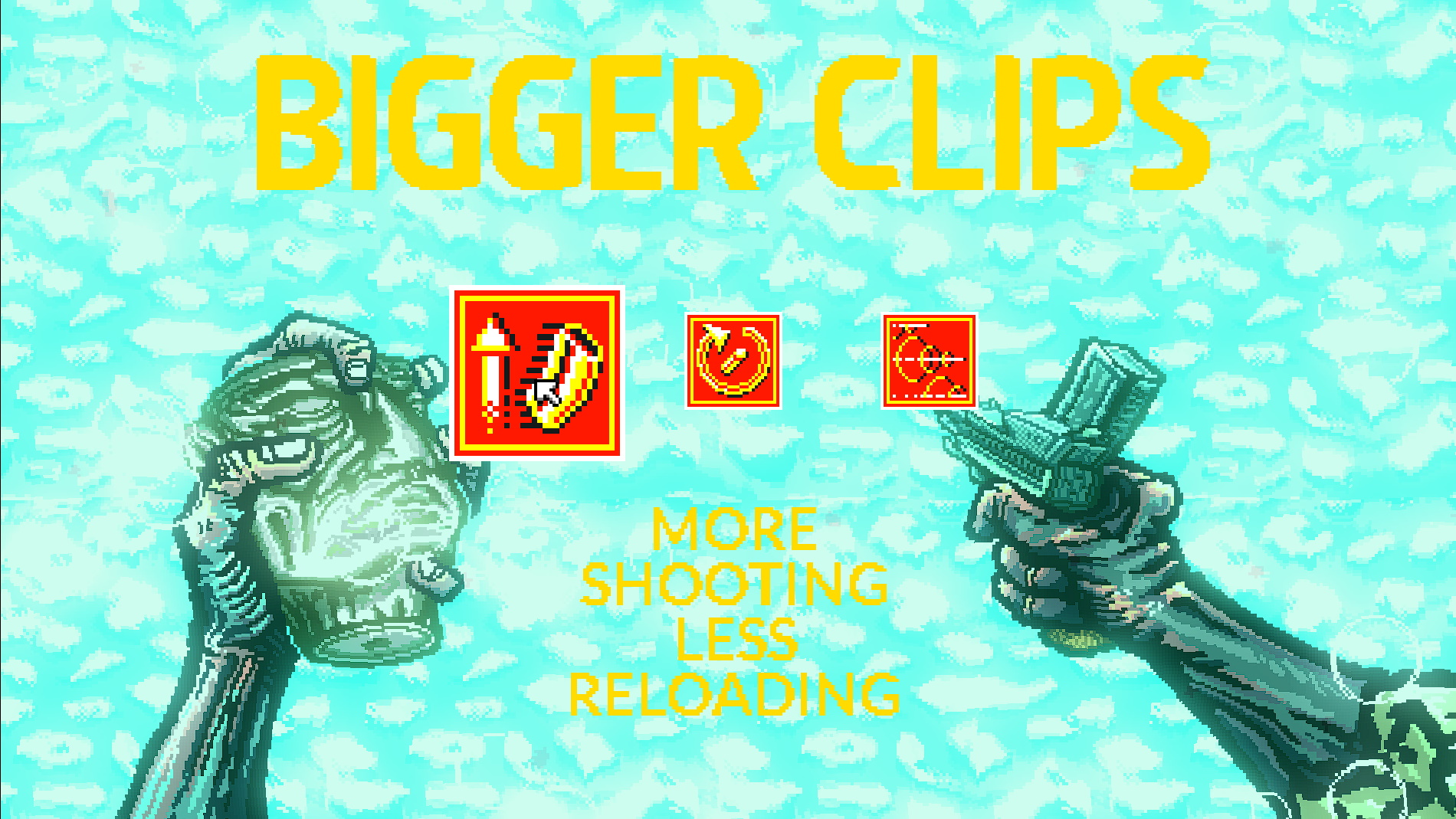 Post-level bits are a welcome reprieve. I highly recommend pausing just to hear how it distorts the soundtrack.

Post Void is a masterpiece of compulsive motion and hypnotic, irresistible sounds. It does something to my brain that I’ve never experienced before.