If your PC is constantly running out of space, then you should probably think about buying another SSD, and to help you get the best deals on today’s best SSDs for gaming, we’ve rounded up all the cheapest prices going on in the UK and US. This week, prices have fallen on Crucial’s excellent MX500 drive over in the UK, and our friends in the US can enjoy $10 off the 500GB models of WD’s Black SN750 SSD. Meanwhile, there’s also a hefty £10 off the portable Samsung T5 this week, making it a good time to snap up a bunch of great storage deals. Whether you’re looking for a cheap SATA drive or a brand-new NVMe SSD, these are the cheapest SSD deals of the week.

You can hop straight to the type of SSD you’re after by clicking the links on the right, or you can carry on scrolling to see all of this week’s best SSD deals in turn. All of the SSDs included in this list have been tested right here at RPS, too, so you can be sure you’re getting a great bit of storage for the best price possible.

You can find more information about what makes a great SSD deal at the bottom of this article, but the best bit of buying advice I can give is to not be fooled by the crazy high sequential read and write times you see on an SSD’s box, as they’re not what you’re going to see in everyday use. Instead, random read and write times a much better indicator of how quickly a drive can open or save a file on your PC (and why I place such an important emphasis on it in my SSD reviews). Good random speeds are particularly important when your PC’s trying to open dozens upon dozens of game files, but they’re also vital for when you’re copying large batches of files, or verifying Steam installs.

And if you’re looking to upgrade your PC with even more top notch components on the cheap, why not have a read of our regularly updated graphics card deals, CPU deals and gaming monitor deals as well while you’re here.

Still one of the best gaming SSDs around, the Samsung 860 Evo remains our top choice for those after an exceptional SATA SSD. Alas, prices have once again remained unchanged this week, so if you’re looking for a good 1TB drive, you’re better off opting for the 860 or 870 Qvo below.

While not quite as fast as the 860 Evo, the 860 Qvo is an excellent way to get a lot of storage without spending an absolute fortune. Again, no change in price this week, but the 1TB model is still much cheaper than a 1TB 860 Evo, and its performance is still absolutely top drawer.

The Samsung 870 Qvo is arguably one of the best high capacity SATA SSDs you can buy right now thanks to its fast random read speeds and comparatively low prices, especially if you’re looking for a drive that’s 2TB or above. The 1TB model still isn’t quite as good value its 860 Qvo in the UK, having risen £5 this week, but otherwise prices have remained static.

The WD Blue 3D NAND isn’t as fast as the Crucial MX500 or Samsung 860 Evo, but at these prices it’s very hard to argue with, especially if you want a cut-price 1TB SSD that doesn’t break the £100 mark. Prices have remained the same this week, so those after a 1TB drive in the US should consider opting for the Samsung 870 Qvo instead.

The Samsung 970 Evo has long since been replaced by the 970 Evo Plus below, but in the UK there continues to be some surprisingly good deals on this still excellent NVMe SSD. It’s pretty much just as fast as the Plus below, and a heck of a lot cheaper, too. It’s a great buy.

With exceptional read and write times for small and heavy workloads alike, the Samsung 970 Evo Plus is currently our top pick for those after the best NVMe SSD money can buy, but you’ll probably be perfectly happy with either of its WD rivals below if you’d rather save yourself some money. Prices have remained static this week, except the 500GB model in the US, which has received a very agreeable $10 price cut.

The second best NVMe SSD you can buy right now, the WD Black SN750 is normally a great alternative to the Samsung 970 Evo Plus if you want top notch speeds for a little bit less. 250GB and 1TB prices have remained the same this week, but it’s a bad time to buy a 500GB model in the UK, where prices have risen by £8 for the regular version and £3 for the heatsink model. Fortunately, there’s better news if you’re in the US, as both the regular and heatsink editions are $10 off right now.

A newer version of the excellent WD Blue SN500, the SN550 is even faster than its predecessor. It’s also available in a larger 1TB size, and is absolutely the de facto NVMe SSD for those on a budget. Prices for the 250GB have inched up by a couple of pounds in the UK this week, but prices have remained static everywhere else. 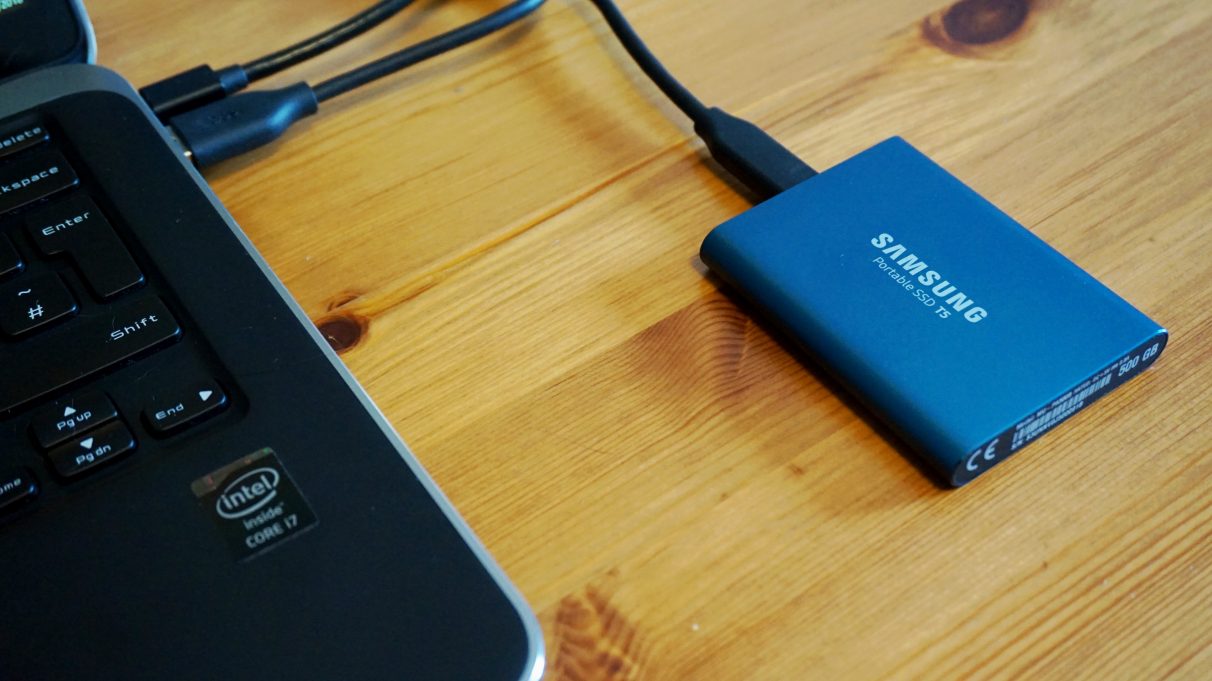 It may have been succeeded by the fancier Samsung T7 Touch, but the T5 still remains one of the best value external SSDs around. Stock levels are getting lower by the week, though, and it seems to be completely out of stock over in the US. There are still some around in the UK, thankfully, and it’s £10 cheaper than usual, too.

How to get a good SSD deal

Speed is one of the most important things to consider when buying a new SSD, and many of the drives on my best of SSD list have excellent read and write times – and I’m not just talking about the crazy-high sequential times you’ll see plastered all over an SSD’s box, either. These can often reach up to thousands of MB/s, which may sound like good news, but in practice it’s not a very good indicator of what kind of speeds you’ll get in day to day use.

That’s because most SSDs read and write data randomly, sticking bits here and there all over an SSD’s storage blocks. As a result, an SSD’s random read and write speeds are really what you should be looking out for when selecting your next SSD, and you can find out what these are by reading my SSD reviews.

Another important consideration is an SSD’s capacity versus how much it costs – something commonly referred to as price per gigabyte. The minimum size SSD I’d recommend these days is 250GB, as this will give you enough room for your Windows installation (around 20GB), a few big games, plus all your music, photos and any other creative / productivity programmes you might need. If you’d like to have more than a couple of big titles installed at once without compromising on load times, however, you may want to consider finding the cash for a 500GB or 1TB SSD. Here, price per gigabyte becomes super important, as you don’t want to pay over the odds for having a large and varied game library you can call upon at a moment’s notice.