Knights are the elite fighters in your Crusader Kings 3 army, often acting as a turning point for you in battles against weaker foes. They have various names, like Fāris, Shoorveers, Champions, or Baghaturs, but throughout the game knights are the same. Here’s how to recruit more knights, and all the things they’re useful for.

The game doesn’t explain particularly well how to get knights into your army, or what they actually do exactly. Some of them are your councillors, some your vassals, and some knights are even your sons and heirs. Here’s what you need to know about getting more knights to fight for your cause, and exactly what they’re useful for.

How to recruit knights

Knights can be recruited from your court and as guests. An easy way to see who is eligible to become a knight is by hitting F3 to check out your military, then clicking the ‘Knights’ tab to the right of ‘Levies’. Of course, the name of this changes depending on what knights are called in your part of the world.

Here, you can see all the current knights in your court, as well as guests you can recruit. They’re ordered by default by prowess, so if a particularly strong knight happens to stop by as a guest, you can click the ‘Recruit to Court’ button and pay them a sum of gold to become your knight.

Of course, this isn’t a perfect method – sometimes you might not have any valid applicants. For situations like this, you can click the ‘Invite Knights’ option at the top of the Knights menu. This costs 150 Prestige, and can only be done once every 10 years, but guarantees at least three men with 12 or more prowess will arrive at your court within a few months.

Knights usually cost between ten and 50 gold to recruit, so depending on your cash intake, they can pay for themselves military victory. But what do knights actually do?

What is a knight’s prowess?

Knights have a stat that comes into play when fighting called prowess. This skill reflects how well they perform in individual combat, as well as duels. Basically, you want your knights to have as much prowess as possible.

The higher a knight’s prowess, the less likely they are to get captured and killed in battle too, so be careful not to put your important council members in harm’s way and get them killed. It’s been rough having trained up a perfect heir only for him to get shanked by a pitchfork at the battle of Abingdon. You can stop this from happening by going to the Knights menu and clicking ‘forbid’ on the relevant soldier, banning him from setting foot on the battlefield until you say otherwise.

How to train and improve your knights

Knights don’t stay at the exact same level for their entire lives. They can get old, wounded, or develop a sex addiction that hampers their general ability to fight effectively. There are ways to keep your knight corps strong though.

You can increase your knights’ effectiveness by investing in the martial lifestyle with your leader. By going down the Gallant tree, you can gain abilities like Chivalric Dominance, which makes your knights 75% more powerful for as long as your leader lives.

It’s also possible to increase the total number of knights under your command. This can be done using lifestyle perks like Kingsguard, or by increasing your level of fame. Earning more prestige gives you extra knight slots, allowing you to deck out your armies by even more.

Your Marshal councillor can help in both areas too – setting them to ‘Train Commanders’ gives you the chance both to find extra knights each month and improve your knights’ prowess.

What else can you use knights for?

It’s often good to use the ‘force’ and ‘forbid’ options when managing knights. For example, maybe you have a councillor with extremely strong abilities in their category, you might not want them fighting in a war and getting in harm’s way. To avoid this, click ‘forbid’ in the knights menu next to their name, and they won’t be marching off onto the battlefield no matter their prowess level. By default, if all your knights have ‘allow’ selected, they’ll go into battle in order of prowess, but you can nudge this around by using ‘force’ and ‘forbid’.

You can even reorganise your army and ‘accidentally’ put a single knight in a battle against a whole army. To do this, raise an army and select it, click the ‘split off new army’ icon in the bottom right of the army menu, and select the knight you want to meet an unfortunate end alone. The screen should look similar to the below, and it’s great for bumping off irritating vassals or children. 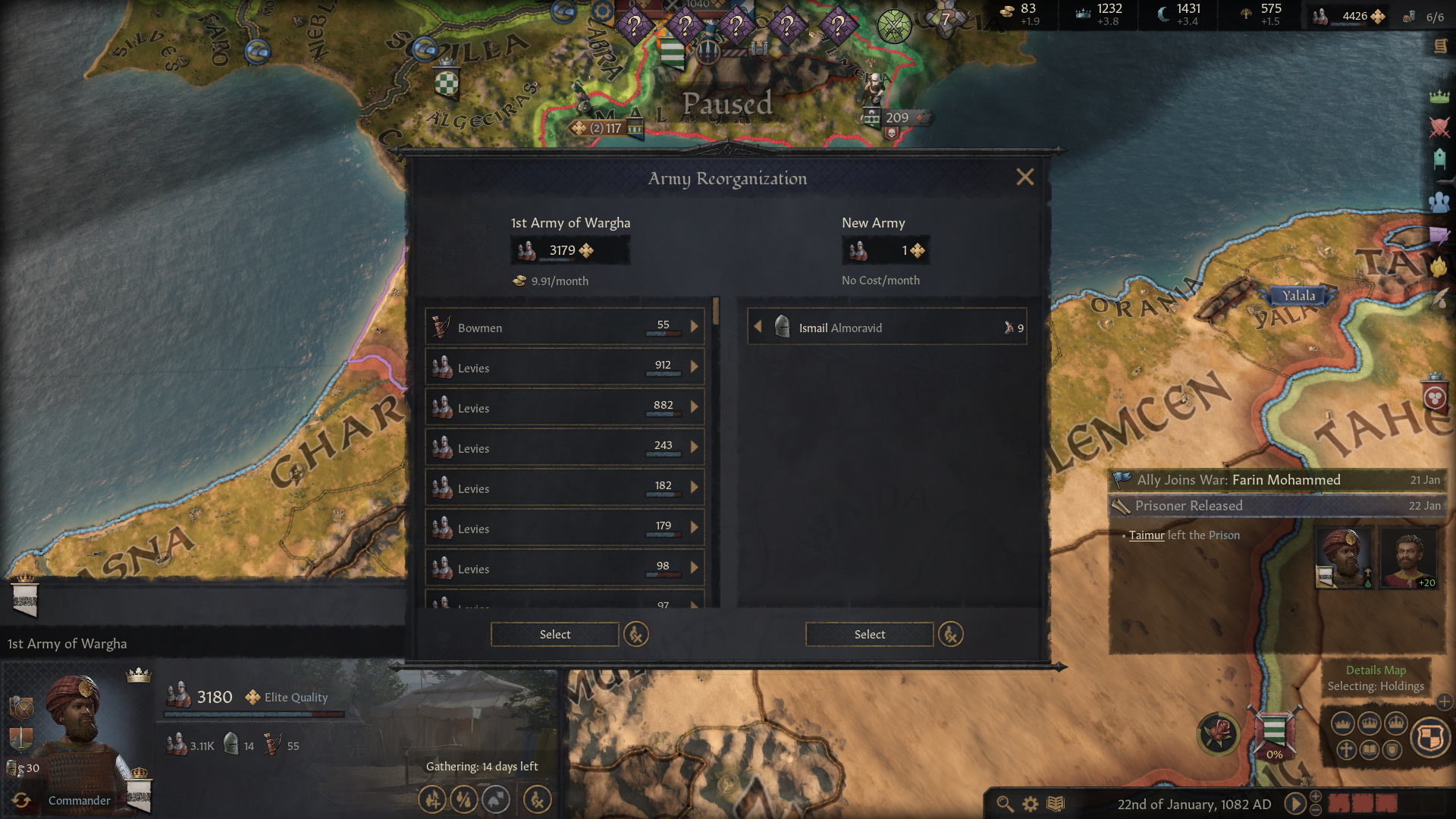 That’s all for our Crusader Kings 3 knights guide, but if you want more tips, check out our CK3 beginner’s guide, as well as our tips on the best starting rulers the game has to offer!