“This is all just an excuse for me to build a universe, right?” says Daniel Fedor, as I settle in for an evening watching him play Ostranauts. And he’s serious. The sandboxy space sim, which hit early access on September 10th, and which is a sort-of sequel to acclaimed oddball RPG NEO Scavenger, has some properly deep worldbuilding. And I don’t mean deep as in “my D&D setting has a map I did myself, and religions to boot”. I mean deep as in “a spreadsheet just to track the product ranges and distribution networks of fifty-odd manufacturing brands”, which is just one of Fedor’s many design documents.

This depth of setting is the best thing about Ostranauts. As I said in my preview, it’s top-notch science fiction. The real deal, that you want to fly out and get lost in. But as I also said, the demo build was frustratingly obtuse to play. The more things you want to be possible in an open-ended game like this, the more scaffolding you have to build, and the history of early access sandbox games is littered with the wreckage of structures that were too rickety to hold the weight of play. If it wasn’t for the existence of NEO Scavenger to suggest otherwise, in fact, I’d fear Ostranauts would end up among them. But despite the odd alarming creak, it’s still standing after five years of work. And from the very top of that scaffolding, you can see the stars.

What is Ostranauts, then? It’s a game about making a life for yourself in a shitty future version of the solar system, where Earth has abruptly been cut off from its off-planet holdings. But Fedor can distil it a little more than that. “You’ve seen that episode of Firefly, Out Of Gas?” he says (it’s the episode where Nathan Fillion has flashbacks about acquiring his spaceship). “That’s the crux of this game for me. I wanted to relive that episode of ‘this is the ship I want; I see it in the junkyard; I’m gonna clean it up, patch it up, fly it, and find the right people for it. Then We’re all gonna have a blast, and there will be space drama.'”

It’s taken five years, so far, just to get Ostranauts to early access. Fedor has a publisher now in Modern Wolf, which is helping progress. But for much of that time he was flying solo, with occasional support from contractors. As a result, Ostranauts is as shallow in some areas as it is deep in others. In the hour and a half that I watch Fedor play, we see pretty much all the main things the game can do at this point in its life.

We create a character, fly out to a “boneyard” full of derelict spaceships, spruce one up, and fly it back to K-leg, the Nigerian-owned planetoid base that serves as Ostraunauts’ current starting area. We don’t hire any crew in the end, as I run out of time, but Fedor says that’s OK – while crew are fun to interact with, they’re not yet implemented to the point where they save more labour than they create.

This is a running theme in our conversation. Every couple of minutes, I see the tantalising tail-end of a feature which it transpires is going to do some really interesting things, but isn’t doing too much at present. K-leg, for example, is one of a pretty small number of visitable-on-foot locations in Ostranauts’ solar system. There’s an amazing character creation system that’s an entire text-based RPG in itself, where you generate your character’s entire life story via a diegetic résumé-generation kiosk – but there’s only enough content fed into it to support a few potential branches right now. 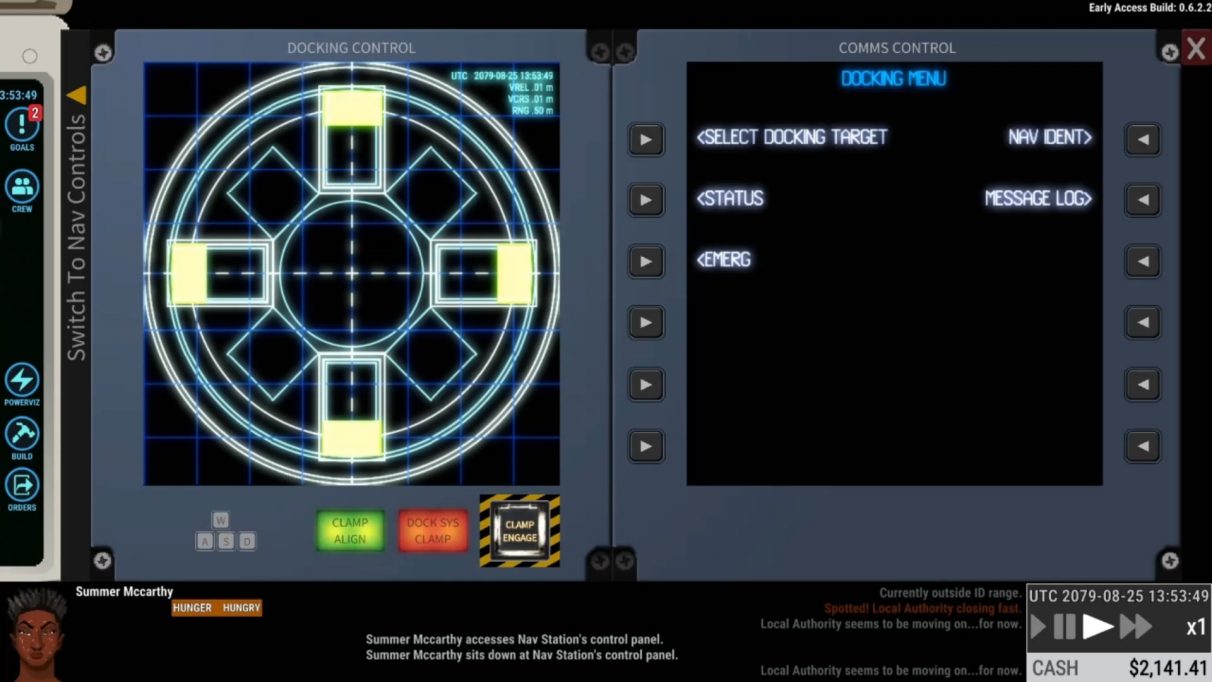 This was such a satisfying process to watch.

And so on, and so on. But if this all sounds dismissive, it’s not meant to. This is early-early-access, for a start. And while there’s an argument to be made that Ostranauts was launched a little too early, then it’s the equivalent of a premature whale baby: not quite fully formed, but still bloody massive. Even though many elements are still just nubs, there’s a lot of exploring to be done. I spent ages, for example, just looking at the navigation console on Fedor’s spaceship, which displayed (in a magnificently Weyland-Yutanian, retro-futurist fashion) the orbit of every single natural and man-made body in the entire solar system.

There are loads of the bastards. Fedor says the decision to put all of them in seemed like a good idea, “until the moment where I looked up a full list of Jupiter’s moons.” But there they all are, careening around the Big Man himself like a swarm of pissheads in dodgems. One day, they’ll all have bases to be visited, trade hubs to haggle at, and entire populations of characters to make friends and enemies among. Making this possible won’t involve the eternity of labour it initially threatened to, as Fedor is committed to using a certain amount of procedural generation for base layouts, ship traffic and the like. But it’s still a big effort, and at the moment, only K-leg and its environs are really practical as areas of activity for your fledgling space scoundrel. 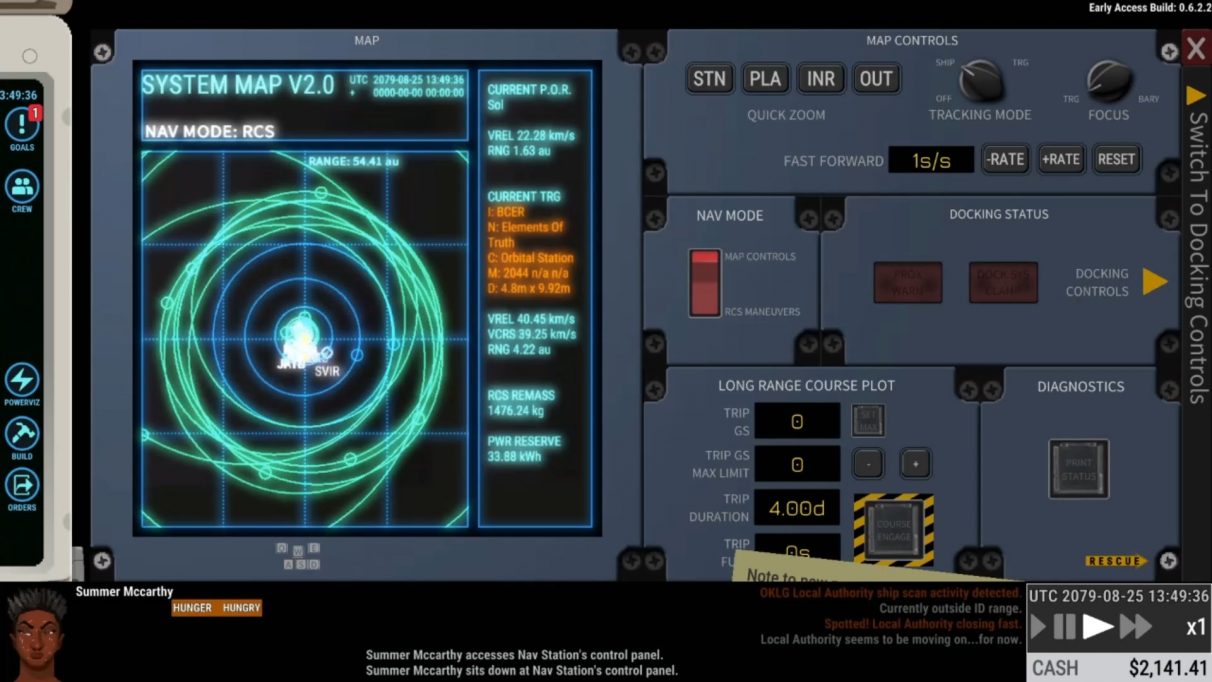 Many, many spinny rocks.

Suddenly, an alarm starts blaring on the ship, and Fedor has our captain scurry back to the navigation console. “We’ve been stood still talking so long,” Fedor explains, as a red triangle flashes on the map of local space, “the cops have gotten suspicious”.

The rozzers have sent a ship to check us out, and I ask if it’s possible to board it and steal it. Not yet, is the answer, as physical combat isn’t implemented. But at some point, definitely. Along with bribery, dropping the name of a local big cheese to get you off the hook, or even appealing on a personal level, because your generated backstory means you once shared a prison cell with the cop in question.

I’ve been around the block enough with early access games to know an “anything is possible!” pipe dream when I see one, but it doesn’t feel like the case with Ostranauts. As the detailed survival mechanics of NEO Scavenger showed, Fedor believes in fidelity when he simulates things. I have no doubt that he will get round to implementing a great deal of the features we talk about, and in many cases the infrastructure is already in place. It’s just a question of the time it’ll take… 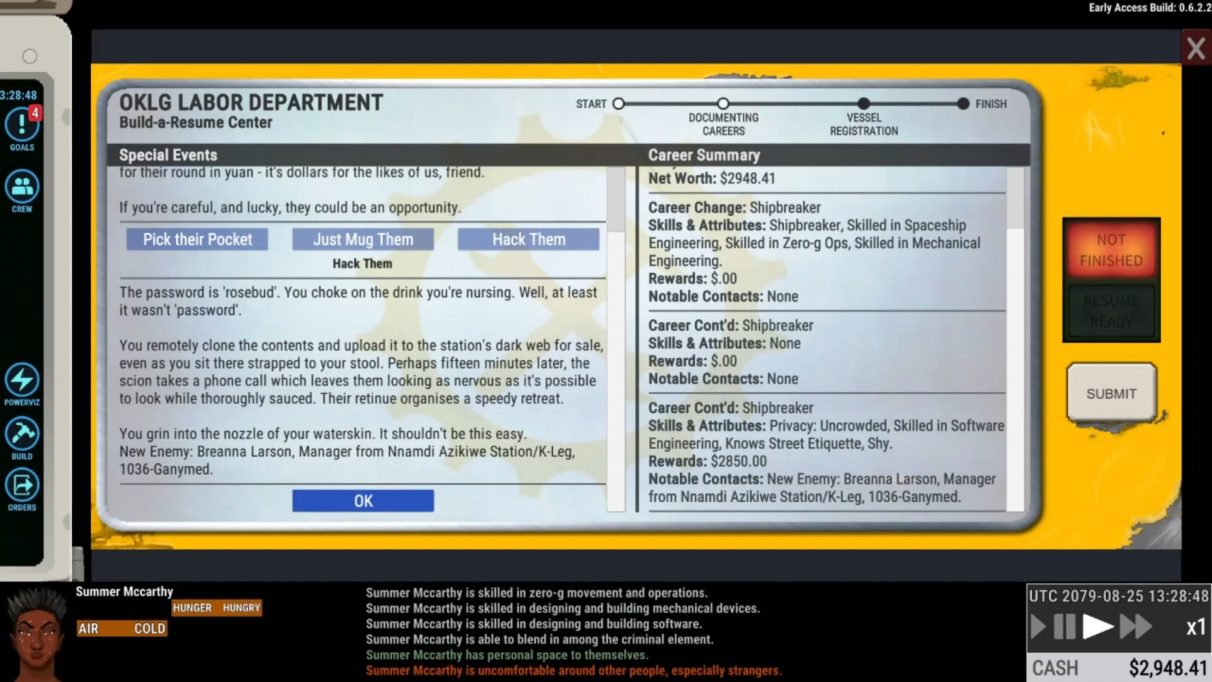 Character creation can see you make enemies and friends, and pick up all sorts of unusual circumstances.

I get the sense it’s quite frustrating. And it would be hard enough, if Fedor was just working on one game. But Ostranauts feels more like a compilation of games, all working together. Some are arguably minigames, like the initially baffling reactor control panels, or the docking alignments when boarding with derelicts or stations. Others are very much maxigames, like the aforementioned character generation system, or the spaceship piloting, or the “social combat” system that takes the place of regular NPC conversations. Imagine a sort of menu-based game with card game mechanics, based on Maslow’s Hierarchy Of Needs, and you’ll be a fifth of the way there. It’s weird, and a bit broken in places, but it’s fascinating.

I suppose the “main” game is a sort of top-down RPG, where you move your captain around to interact with things and talk to people. But you can interact with so much that you could reasonably describe it as a so-called immersive sim. And since you can build your own spaceships to any design of your liking, it’s arguably a construction game too. Oh, and once you’ve got a crew as well, it becomes something like The Sims, but crossed with a party-based RPG, and also a colony management game like RimWorld. Oh, and it all gives off massive Space Station 13 energy, too. 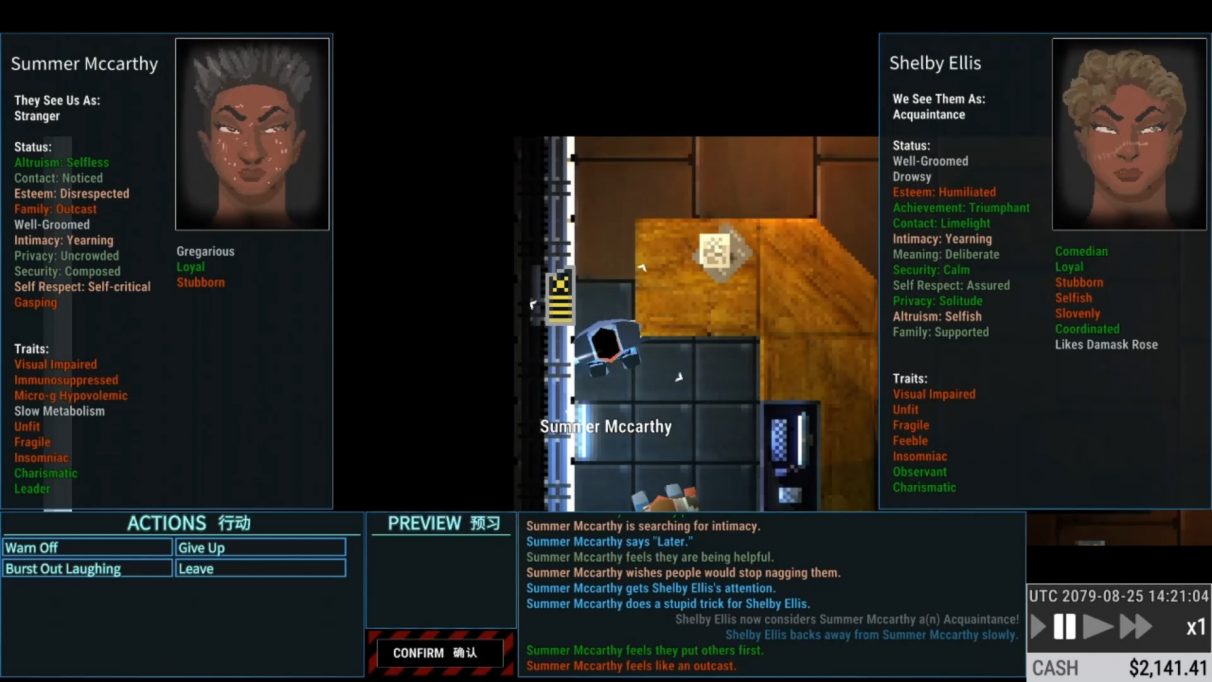 It’s a lot. And I won’t lie: when I played the demo, I felt lost in it all. Part of that was the good kind of lost: I had to adapt quickly to thinking in Kelvin, for example, because that’s the temperature unit Fedor’s space people use, and that’s that. “if I had to learn celsius when I moved from the US to Canada,” he jokes, “then you have to learn Kelvin if you’re going to space.” At the same time, however, I felt the bad kind of lost, due to a baffling UI that seemed to want to keep features hidden, and then demanded a merciless amount of busywork from my mouse hand once they were uncovered.

Fedor is well aware of this, and is now working full time to fix quality of life issues. It’s working, too. Despite a rocky launch, the reception Ostranauts has been getting on Steam is more favourable now than it was even a week ago. But while Fedor wants people to, y’know, enjoy playing his game, he’s still got space on the brain. “I can’t wait to get out of bugs and stability stuff,” he says, “and back into crafting”. And despite my complaints about the demo, I almost wish he’d skip all the usability stuff and just build more universe, even if it’s a bit janky.

“That’s the other reason I became a game developer”, he confesses, bookending the admission this post opened on, as we discuss the research that fed into Ostranauts’ generation of spaceship serial numbers. “It’s so I’ve got an excuse to look this sort of stuff up, and find a use for it”. As far as I’m concerned, that’s about as noble a goal as you could hope for. Give Ostranauts a go.