The Nvidia GeForce RTX 3070 is very nearly here. It’s the third Nvidia Ampere GPU that’s being released this year, and we finally know how when it’s releasing and going on sale, as well as much it’s going to cost. Set to deliver faster performance than Nvidia’s previous flagship graphics card for a fraction of the cost, the RTX 3070 could be one of the most interesting GPU releases of recent years, so here’s a quick reminder of everything you need to know about Nvidia’s new Ampere GPU, including its price, specs and release date.

I’ll be updating this article on a regular basis as we get closer to the RTX 3070’s launch later this month, so be sure to check back often so you can stay up to date on all things RTX 3070. It won’t be long before I can start testing the RTX 3070 myself, too, so we can see exactly whether this RTX 2080 Ti-beating graphics card is really as fast as Nvidia claim.

The RTX 3070 is launching worldwide on Thursday October 29th. Nvidia previously only announced a vague ‘October’ window during their initial RTX 3000 launch when they unveiled the card alongside its RTX 3080 and RTX 3090 siblings, but they’ve since confirmed its exact release date in a new blog post on their GeForce site.

It’s widely expected that both the Nvidia Founders Edition of the RTX 3070 as well as third party versions of the card from manufacturers such as Asus, Gigabyte, MSI, Zotac, Palit and more will be available on this date, so watch this space for more information.

It does mean, however, that you’ll likely miss Nvidia’s current free game promotion, which gets you a free copy of Watch Dogs Legion and a year’s subscription to GeForce Now if you buy an RTX 3000 card before October 29th. You might be able to squeeze in if you buy one on launch day, but otherwise you’ll probably lose out.

RTX 3070 prices will start from £469 in the UK, and $499 in the US. That’s more or less the same launch price as the RTX 2070 Super. Third party versions of the RTX 3070 will likely be more expensive, though, depending on how much they’ve been factory overclocked, but the Nvidia Founders Editions will stay at a fixed £469 / $499.

At time of writing, there hasn’t been much confirmation of how much third party RTX 3070 cards will cost, as many sites haven’t yet confirmed their official pricing. Indeed, if retailer stock ends up being as low as industry analysts are currently predicting it to be, prices could shoot up very quickly as we get closer to launch. Several retailers currently have holding pages for the RTX 3070, though, and I’ve included a list of everywhere you’ll be able to buy an RTX 3070 come October 29th below. 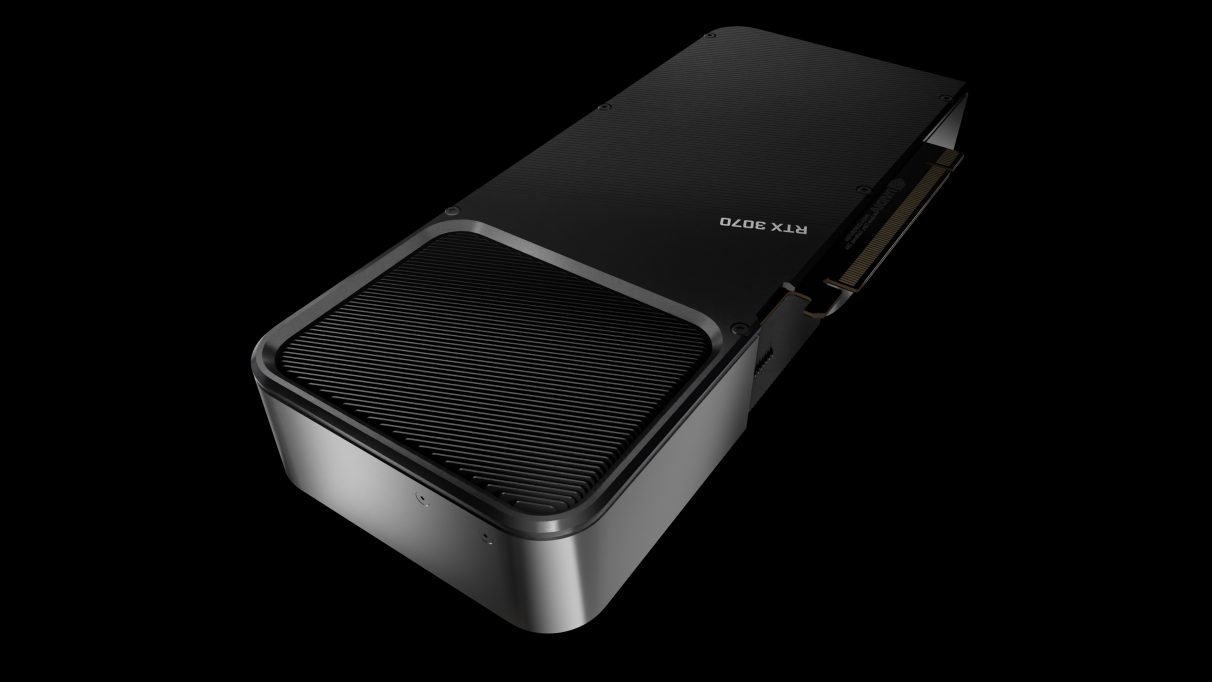 The most eye-catching thing about the RTX 3070 is that its specs are meant to offer slightly faster performance than Nvidia’s outgoing RTX 2080 Ti, a graphics card that’s often cost well over £1000 / $1000 ever since it launched back in August 2018. That’s impressive stuff considering the RTX 3070 will set you back only a fraction of that amount (and also goes to show just how grossly overpriced the entire RTX 20-series was in retrospect), and you can see where that extra power is coming from by taking a closer look at its specs.

Nvidia haven’t released all of the RTX 3070’s specs just yet, such as memory speed or memory bandwidth, but I’ve listed the key specs they have announced above. It has over 1000 more CUDA cores than the RTX 2080 Ti, as well as a faster base and boost clock speed. It still only uses GDDR6 memory, however, rather than the faster GDDR6X variety found on the RTX 3080 and RTX 3090.

Still, while its memory may not be quite as fast as the rest of its RTX 3000 series siblings, the RTX 3070 still comes with 2nd Gen ray tracing cores and 3rd Gen Tensor cores for improved ray tracing and DLSS performance. Nvidia claim this will make the RTX 3000 series twice as fast as their previous generation RTX cards on this front, but I’ll have to wait until review samples of the RTX 3070 are available before I can confirm this for sure.

In the mean time, though, here’s where the RTX 3070 sits in comparison to the rest of Nvidia’s RTX 3000 family, as well as their RTX 20 series of GPUs, and even some of Nvidia’s older GTX 10-series and 900 series graphics cards. 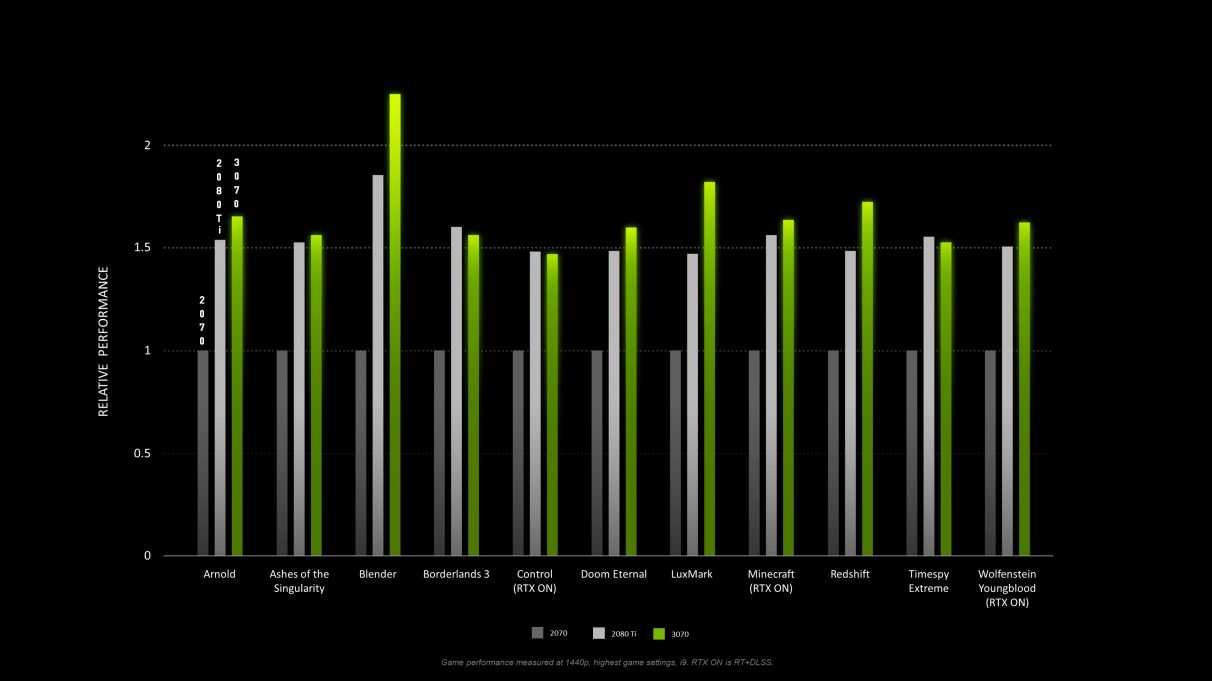 Thankfully, Nvidia’s recommended system power spec is still 650W for the RTX 3070, which is the same as the RTX 2070 and RTX 2070 Super. As a result, you shouldn’t need to change your PSU if you’re planning to upgrade from the previous generation. 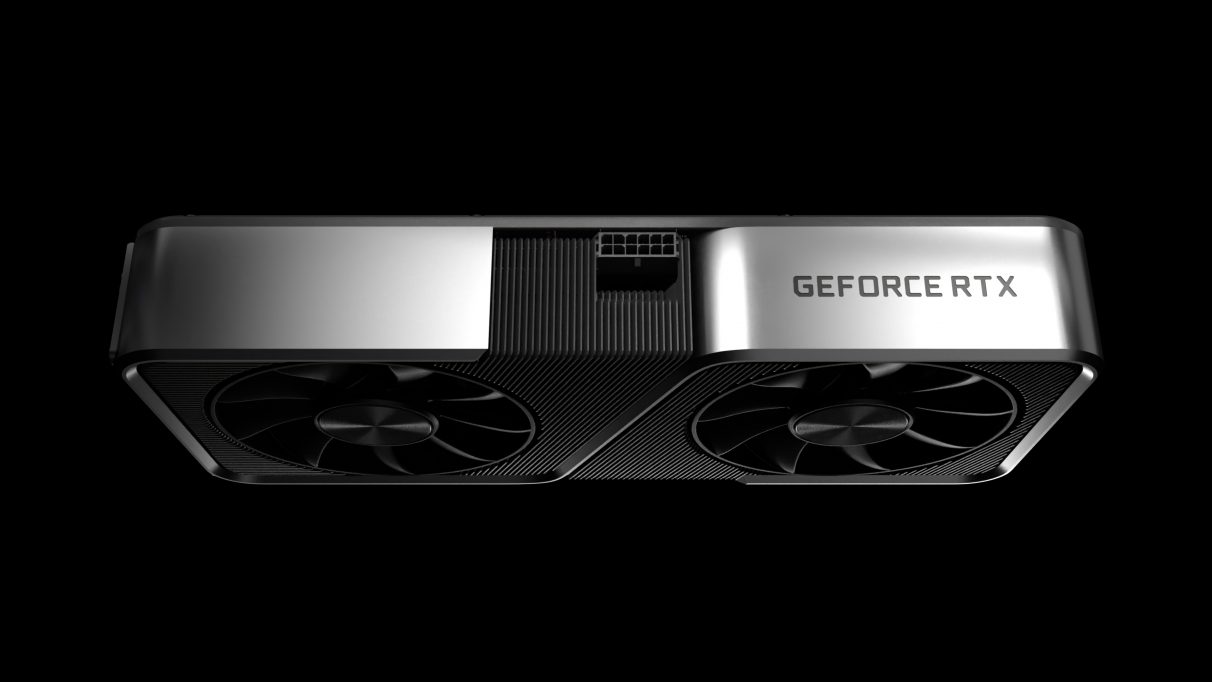 Those are the headline facts for the RTX 3070, and I’ll be updating this article with more information as it becomes available. In the meantime, you can read all about our favourite GPUs in our roundup of the best graphics cards, what games currently support ray tracing and DLSS, as well as find all the best current graphics card prices in our regularly updated graphics card deals hub.