Now streaming live:
Genshin Impact details
Genshin Impact is a free-to-play, open world game that successfully takes a lot of inspiration from Breath Of The Wild, with a seemingly unobtrusive gacha mechanic.

Genshin Impact has a lot in common with Breath Of The Wild, including the ability to climb any surface, a pocket hang glider, the design of its enemies, and the need to stuff your pockets with cooking ingredients. But rather than criticise it for being derivative, I want to celebrate it for what it gets right – and what it adds – to the formula of its most obvious inspiration.

I watched a trailer of Genshin Impact earlier in 2019 and filed it under ‘destined to disappoint’. It looked beautiful, but it was also a free-to-play game with gacha mechanics from a mobile game developer.

After ten hours with it, I haven’t been compelled to spend money once. The game hasn’t even told me its system for spending real money to unlock characters exists, let alone how to use it.

Instead, all of my time has been spent adventuring across an open world that has learned the right lessons from Nintendo’s reinvention of Zelda. 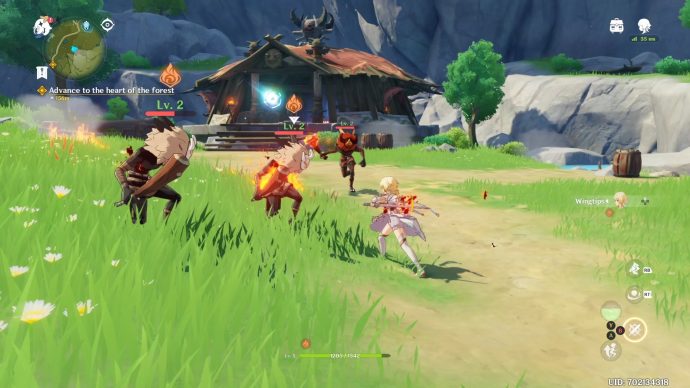 Bokoblin or moblin? No! These are the similar but legally distinct Hilichurls, who populate camps around Genshin Impact’s world.

Genshin Impact begins with Sophie’s character choice: you pick between a brother and sister to play as, and whichever you don’t select is captured and whisked away. Finding and rescuing them is the underpinning narrative, with the more immediate concern being an enormous dragon that’s terrorising the region.

Or, well, that’s what the game’s cutscenes would tell you. Really the most immediate concern is whatever you’ve most recently spotted on the horizon. A beam of light, an oddly shaped tower, an outcropping clifftop, a parochial village, a gleaming waterfall, a mysterious lake. Most of my time with Genshin Impact has been spent in a kind of curious delight: spotting something interesting in the distance, and rushing off to explore.

It’s this, rather than the nuts-and-bolts of climbing and gliding, that Genshin Impact most successfully cribs from Breath Of The Wild. By default, your in-game map does not highlight every possible interesting thing with an icon, and it’s possible to switch to a view mode that marks even less. Instead, the terrain is designed in such a way that your eye is constantly drawn towards something interesting nearby.

There are usually rewards of some kind to be discovered at the end of the rainbow, too, often in the form of a handful of characters to talk to and a quest to begin. The game is anime as heck, and you’ll need some tolerance for high-pitched voices and low-cut tops, but it’s mostly wholesome. Almost everyone you meet is an eager adventurer, and they all have a quirk everyone around them kindly tolerates. Even the cutscenes are mostly short, shifting exposition and worldbuilding into optional dialogue. 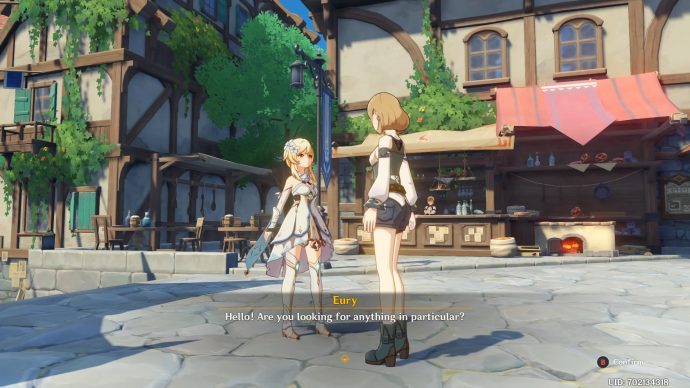 Mondstadt, the game’s first city, is small but beautiful enough to rival the towns of Ni no Kuni.

Where it differs most clearly from its main inspiration is in combat, which borrows more broadly from JRPGs. For starters, you only control one character at a time, but can hot-swap between others in your party using the D-pad. Each of the characters you’ll gather in the first few hours has a different elemental ability, and defeating enemies is about combining those powers during real-time fights. You’ll blast a few moves with Kaeya, an eye-patching wearing flounce with a sword and ‘cryo’ abilities that allow him to freeze enemies and make them wet, then swap to Lisa mid-battle, who wears black lace and fires ‘electro’ powers via a floating spellbook. Lisa’s electrical attacks will deal more damage because Kaeya soaked the enemies first.

Enemies themselves bring complicating factors. There are goblin-like fellows who can come bearing shields, encouraging you to use Amber’s fire arrows to first burn and destroy them before you finish ’em off with a melee fighter. There are also slimes which can be immune from or especially susceptible to fire, ice, electricity or other kinds of attacks. 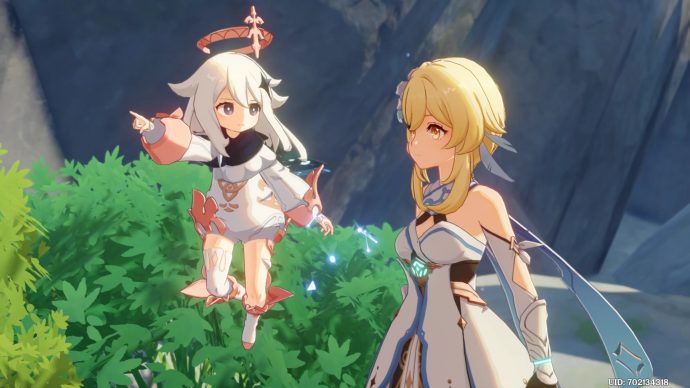 Paimon is an unexplained magical spirit person who refers to herself in the third-person and disappears between conversations. Aka: anime as heck.

So far the combat is pacy and satisfying. It looks good and feels good, and I’ve had fun bashing through camps and dungeons without having to worry about weapons degrading and breaking. Yet it’s within these systems that I can start to see the potential hooks for what Genshin Impact might have waiting for me in its later stages. There are numbers underpinning everything in the game, from the level of sword you’re carrying, to the cooldown timer on your magic abilities, and dozens more beyond. There are also 19 other characters I could collect for my party, if I spent money on rolling the dice to unlock them, each with their own abilities and elements and stats. So far I’ve felt no desire to unlock, and the game has given me no need, but the last inescapable problem with free-to-play games is that I’m always braced for the other shoe to drop. There are hints all these numbers might scale in such a way that I’m eventually left with a choice between grinding to keep up, or paying up with real money.

It’s just as likely that I’ll run out of the singleplayer content I’m enjoying so much, and be left with co-op dungeons or a long wait for a future update. Genshin Impact currently has two cities and a large world to explore – I’ve seen less than half of it so far – but there are announced plans for five more cities and other regions to come. This is an always-online, live service game, and I’m not expecting closure to come before I tire of it. 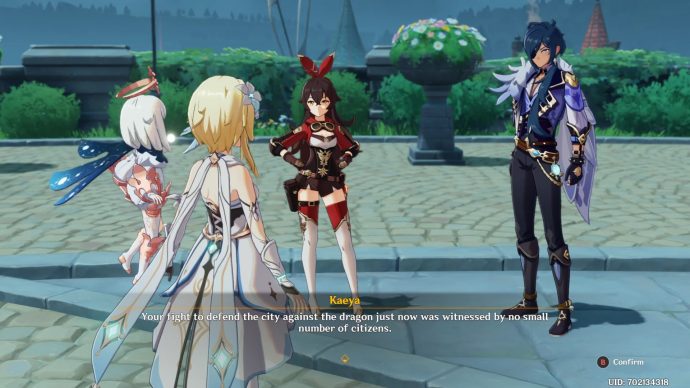 Kaeya and Amber here are two other characters who can join your party. You can hot-swap to play as them, and then go meet them as NPCs while also controlling them, which ??!!?!???

This is a rare game where I’m as excited to see what’s over the next hill as I am to advance the story, and where my favourite moment so far was when I stumbled upon a duck pond at night. Every part of Genshin Impact has such a lovely sense of place that I’ve even started listening to its orchestral soundtrack around the house, something I never normally do, out of a desperation to conjure a little of its atmosphere in the moments when I’m not playing.

In other words, Genshin Impact is exactly as beautiful as it looked in that trailer earlier in 2019, and so far at least, genuinely, bafflingly free.