With AMD’s new 4th Gen Ryzen CPUs due to be announced on Thursday, now is quite a good time to pick up one of their existing 3rd Gen chips on the cheap. Indeed, Newegg have an excellent CPU deal on the Ryzen 5 3600XT at the moment, making it a better buy than the regular (not to mention more expensive) 3600X. There have been some good drops on Intel’s new 10th Gen CPUs, too, including the coveted Core i5-10600K. So, to help you get the best CPU deal around, I’ve rounded up all the lowest prices from around the web in both the UK and the US, covering all of our top gaming CPU picks. Whatever type of PC you’re looking to build, here are the best 9th and 10th Gen Intel CPU prices and best AMD Ryzen CPU deals going on this week.

Buying a new CPU can often be one of the biggest purchases when it comes to upgrading your PC, as you’ll likely need to buy a new motherboard for it as well if your current processor is more than a couple of years old. As a result, it pays to get the best deal you can on your new CPU.

You’ll find more info on how to get a great CPU deal at the bottom of this article if you want a bit more info on what to look out for – and remember, if you’re in need of more PC components for your new build, then make sure you have a look at our regularly updated graphics card deals, SSD deals and gaming monitor deals pages, too. For now, though, here are the cheapest CPU deals of the week.

CPU deals of the week

It may have be getting on a bit now, but the Core i5-9600K is still a great gaming CPU, especially if you want to keep costs down and are conscious about your CPU’s power consumption – as it’s 10th Gen successor is both a lot more expensive and a bit of a power hog. It comfortably outperforms the AMD Ryzen 5 3600X, even if you do pay a bit more for the privilege. Just make sure you’ve got enough budget for a decent cooler, as it doesn’t come with one in the box. No change in price this week, though.

With stock levels finally returning to normal in the US, the Core i5-10600K has dropped $13 this week, making it a much better buy than recent months. Alas, no change in UK prices, but Intel’s first mid-range 10th Gen chip is an absolute beast of a gaming CPU, and if you’re looking for a rock-solid gaming PC that really packs a punch, then you won’t be disappointed. It’s markedly faster than the previous generation, but it’s a real power hog as a result, so make sure you’ve got enough cash for a decent cooling solution and a beefy PSU to go with it.

The Core i7-9700K was a great processor before the Core i5-10600K came along, but when the its gaming performance is pretty much identical to its newer Core i5 sibling, there’s little reason to get one when it’s more expensive, especially with UK prices rising by £3 this week.

We’ve not been able to review the Intel Core i7-10700K yet, but you’re pretty much guaranteed performance between the i5-10600K and i9-10900K, which should be pretty darn powerful. Just like those chips, however, this is a brand new CPU, so you’re unlikely to see bargain basement prices any time soon. Indeed, prices have remained static in the UK this week, although they’ve dropped by $5 in the US.

After their recent plummet, prices for the Core i9-9900K have inched back up again this week, rising by $20 in the US. Thankfully, UK prices are much steadier, but in an ideal world, it’s probably still better to go for the Core i7-10700K at current prices.

If you want the best of the best, you’ll have to be prepared to put a lot of cash up front. This is the best gaming CPU money can buy right now, but it’s currently out of stock literally everywhere in the US. It’s more readily available in the UK, thankfully, but it’s still relatively expensive. It should normally cost around £500 / $520, so don’t be fooled into paying significantly more by the few sites that do happen to have it available. Instead, you’re best off waiting this one out. 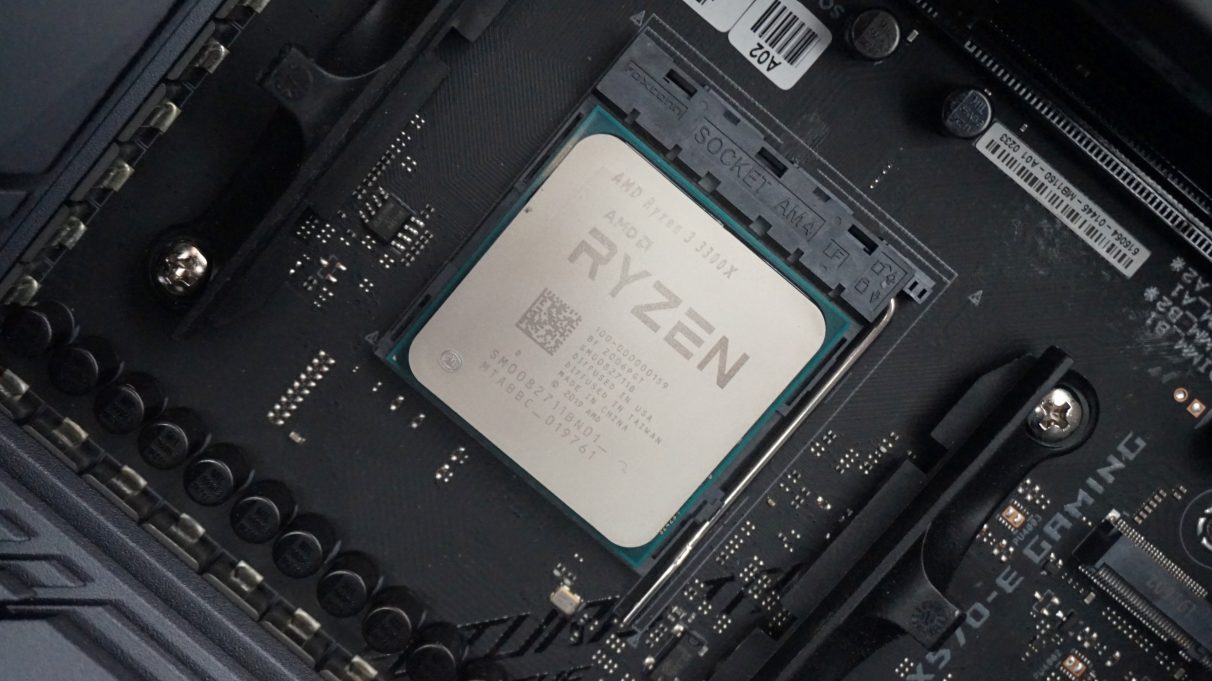 The Ryzen 3 3300X is hands down our favourite budget CPU for two reasons: it’s fast and it’s cheap. How fast? Well, it runs gives Intel’s Core i5-9600K chip a run for its money on most of the benchmarks for half the price, which is pretty hard to argue with. It’s still rare as hen’s teeth to find stock, though, but luckily Adorama in the US have it on backorder – albeit for $9 more than normal. There’s no telling when it will arrive, but at least you can still put in an order. Amazon also says it’s out of stock in the UK, but you can still place an order if you don’t mind waiting.

The Ryzen 5 3600 is a decent CPU, but its gaming performance is pretty much identical to its Ryzen 3 3300X sibling, so you should probably wait for that if you’ve on a tight budget. Prices have dropped by £5 / $5 this week, but if you’re in need a new CPU right now, then US buyers are better off getting the Ryzen 5 3600XT, as this is cheaper than the regular 3600X right now at $235.

The Ryzen 5 3600X is only marginally better than the 3600 above, and ordinarily it would be worth the extra cash. However, prices have inched up this week by £2 in the UK and a massive $25 in the US, which actually makes the fancier Ryzen 5 3600XT a better buy for US folks. I don’t normally include the XT in this round-up as there’s really no need when the regular 3600X is better value, but Newegg’s current deal on it makes it a much better buy at $235.

AMD’s Ryzen 7 3700X isn’t the fastest Ryzen CPU you can buy right now, but it is the best value out of all its top-end gaming CPUs. Not only is it more energy efficient, but the sharp increase in price you’ll face with either the 3800X or 3900X doesn’t really justify the relatively modest leap in performance in our eyes. It’s simply the best balance between price and performance available right now for AMD CPU buyers, and it comes with a free copy of Assassin’s Creed Valhalla. Prices have dropped by £7 in the UK this week, while US prices have remained the same.

While it’s technically better than the Ryzen 7 3700X above, our benchmarks showed its performance to be a mixed bag in terms of value for money. Plus, US prices have risen by $5 this week, so we’d still recommend buying the Ryzen 7 3700X instead.

This is one of AMD’s top Ryzen processors, but boy is it pricey. Prices have remained static this week, but really, this 12-core CPU is geared toward creative media professionals rather than PC gaming, and we think you’ll be much better off getting the Ryzen 7 3700X if you want to stick with AMD, or even opting for a 10th Gen Intel chip.

How to get a great CPU deal:

Upgrading to one of today’s best gaming CPUs can make a surprising difference to your PC’s overall gaming performance, particularly if you tend to play games at a resolution of 1920×1080. The difference becomes a lot less marked at 1440p and 4K, though, so if you regularly play games at these resolutions, then you can save yourself a lot of money by opting for a mid-range CPU instead of an expensive high-end one.

The question, of course, is what type of gaming CPU you should go for? Intel or AMD? A lot of your decision making will be determined by what kind of motherboard you have, although if your PC is more than a few years old, chances are you’ll need to buy a new motherboard anyway. If you’re building a new PC from scratch, then it’s a bit easier, as you can simply pick the best gaming CPU you like the sound of and buy the appropriate motherboard to match.

There are pros and cons to both Intel and AMD. Intel CPUs generally offer better gaming performance overall, but they tend to be more expensive than their AMD equivalents. AMD CPUs also come with their own coolers, and all of them are unlocked for overclocking, which isn’t necessarily the case with every Intel CPU. Only Intel CPUs with a K on the end of their name can be overclocked, which is what you’ll find listed above.

The AMD Ryzen 3 3300X is the RPS CPU of choice in our £1000 RPS Rig build at the moment, if only because its gaming performance is almost as fast as its more expensive Ryzen 5 siblings. If you’re determined to go the Intel route, though, then we’d recommend the Core i5-9600K as an absolute minimum these days, but you should probably find the budget for their absurdly fast Core i5-10600K instead – especially if you want to minimise your risk of having to buy a new motherboard next time you come to upgrade.

If you regularly stream games online, though, then you’ll want a CPU with lots of cores, as your PC needs to be very good at multi-tasking to stream smoothly. This means you’ll probably have to find a bit more budget for something like one of Intel’s Core i7 CPUs or AMD’s Ryzen 7 chips, but you’ll thank yourself later for finding the extra cash.

And remember, if you’re on the look out for more components for your new PC, then make sure you have a look at our regularly updated graphics card deals, SSD deals and gaming monitor deals pages, too.