The opening of Baldur’s Gate 3 takes place aboard a tentacled ship called the Nautiloid. You’ll need to fight your way to the control room to initiate a warp, before the ship crashes into the fiery hellscape below. While exploring the gooey interior of the Nautiloid you’ll come across a number of characters that have been captured by the Mind-Flayers, including a woman trapped inside one of their pods. Let’s take a look at whether or not you can save them.

In this Baldur’s Gate 3 guide:

Can you open the Mind-Flayer pod and save the trapped woman?

You’ll find the trapped woman as you enter the area of the Nautiloid just after reaching the outdoor gun platform. There’s a console as you enter (don’t press it or enemies will spawn), and also a chest that you can open. In the top-left of this room, relative to where you entered, there’s a Mind-Flayer pod with a woman trapped inside. You have a few options to try, here’s the outcome for each:

Given that all three of the options fail to unlock the pod, it’s likely that there isn’t a way to save the woman inside the pod. I scoured the ship looking for the aforementioned warding runes but couldn’t find anything. If we find anything in the future, we’ll update this guide. Don’t worry about leaving her in there though, as this plays into the story. Even if you can’t get her out, I’d recommend still trying to save her. You’ll meet her again shortly… 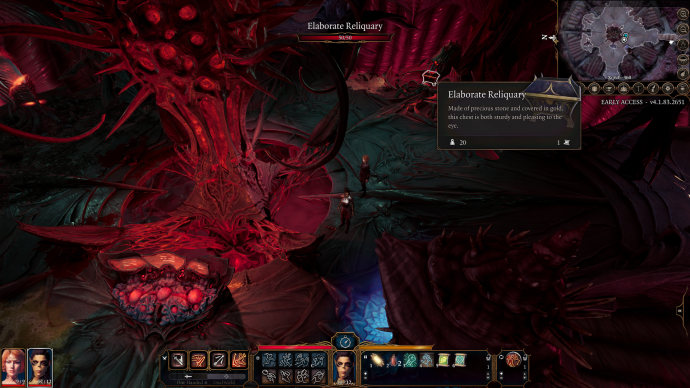 You’ll be able to find the woman in this room. The same one as the Elaborate Chest.

Who is the woman in the pod?

The woman trapped inside the Mind-Flayer pod is a character called Shadowheart. You’ll meet her after escaping the Nautiloid and landing on the beaches below. Because she appears shortly after the pod sequence, you’ll want to have attempted to free her, or your relationship will start off on rocky ground to say the least. If you did try to save her, she’ll thank you for your efforts, and given she becomes part of your party, you’ll want to keep her happy.

That’s all we have on the trapped woman in Baldur’s Gate 3. Be sure to read our thoughts on the game in its current Early Access state. If you’ve run into any bugs while playing so far, check this article on some possible workarounds.