Star Wars: Squadrons is, quite simply, as elegant and joyful as you could hope a Star Wars dogfighting game to be. It’s had more attention lavished on its campaign mode than expected for a multiplayer-focused game – but the problem is, it only makes me pine for more.

My opinion of Star Wars: Squadrons is all over the place. I was excited when it was announced, as I’d been yearning for a proper Star Wars flight sim for years. But then I reined in my expectations, because my bland triple-A release sense was tingling. I played a few hours of Squadrons as soon as it launched, and finished my session feeling a bit nonplussed.

But since then, it has become obvious that this game is very good indeed. The central experience – of being a pilot in a Star Wars – is masterfully crafted, and I can’t find much to fault with it. Squadrons is probably the most fun I’ve had with any piece of Star Wars media since my teens, in fact, and it frequently invokes a joy I haven’t felt since playing TIE Fighter in 1995. But that’s the problem. Because it’s good enough to make me think hard about how it could have been perfect. And when you start doing that, you really start to see the holes in something.

As dull as it sounds, Squadrons’ control scheme, and the extend to which it can be customised, is probably the single thing that makes it so good. I’ve never been that into flight sims, but I know enough to say it’s on the simpler side. By which I mean easy to learn, difficult to master. Turning fast, for example, requires throttling to half speed coming into the apex of your turn (left thumbstick on a controller, which I used for most of the game), and then accelerating again as you start to curve out into your new vector. It’s something that just has to be learned until it becomes instinct, and then further reinforced until that instinct applies to the performance profiles of all eight of the game’s playable ships.

It eased into my muscle memory around a third of the way through the campaign, along with a whole suite of other habits, and once they were in place, I started having the time of my life. Rather than spending dogfights constantly turning in search of just-out-of-reach target markers, I was nipping about like a wasp with a gun, doing swoopy-loopies round big chunks of space wreckage and throwing lasers up peoples’ bums. The various cockpit interiors stopped seeming like annoying walls of meaningless lights obstructing my view and became indispensably elegant UIs instead. 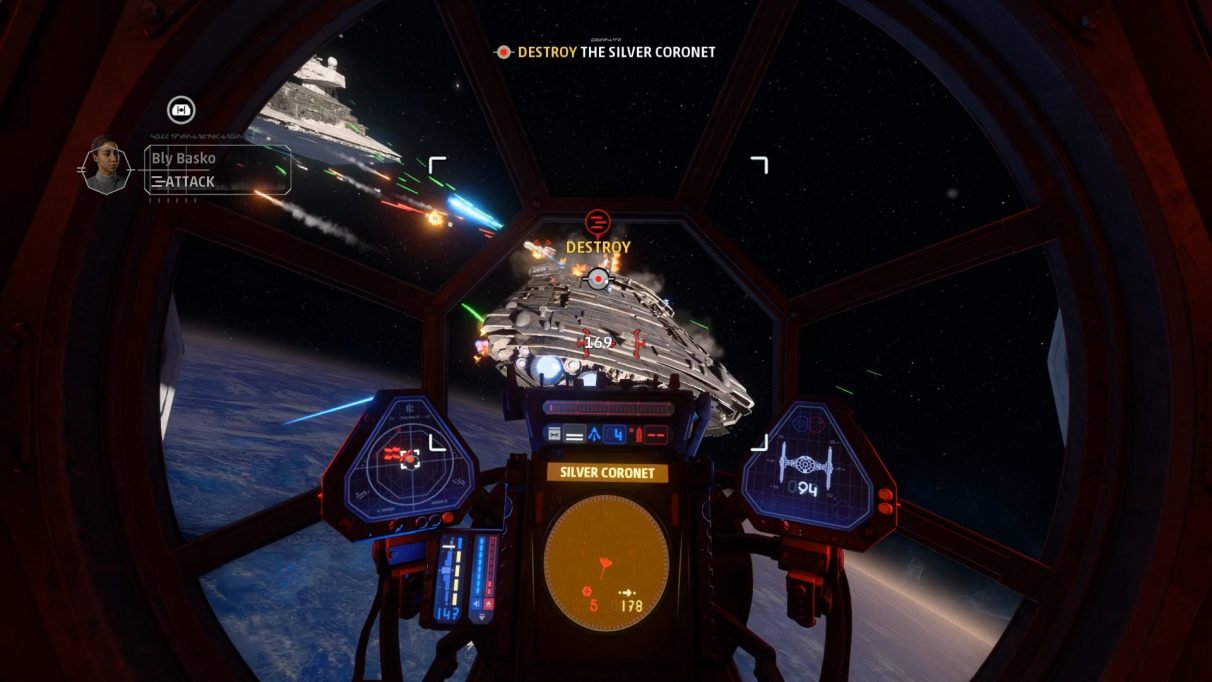 The cockpit of a TIE Fighter is simplicity itself.

Oh, and power management – routing juice to your shields, lasers, or engine. It’s ace. I’d thought that it was a much stripped-down version of the system that had featured in TIE Fighter, but no: I’d just not realised it was on simplified mode by default. Once I’d tinkered with my controls and seen I could make it more elaborate, I had a delicious new set of instincts to learn. 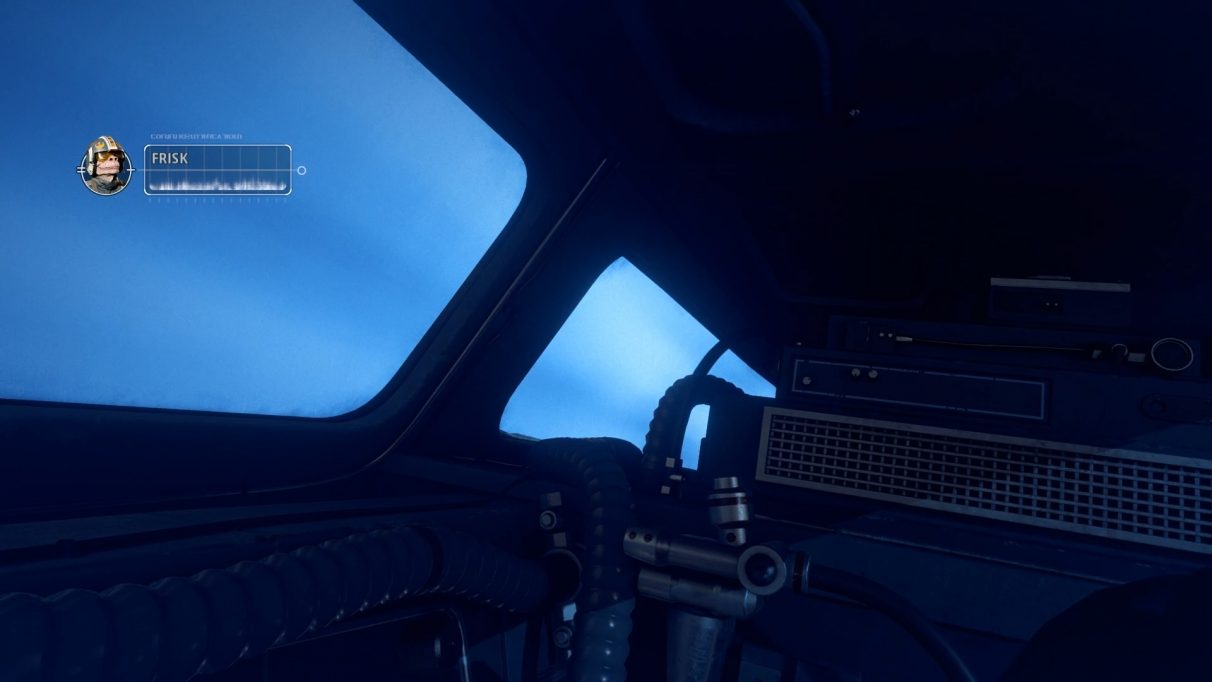 Even without VR, there’s a free-look mode that lets you peer around you, as I did here to see if my Y-wing had a co-pilot. Alas, I was alone.

I’ve not played in VR, but I can really see where it would shine here. One thing I did struggle with consistently was a sense of general battlefield awareness, often only knowing what was going on in the cone of view directly in front of me. Part of that is down to my abysmal sense of direction, but being able to turn and look out of the side of the cockpit would have been dead handy. Apart from anything else, I can imagine VR would just do so much more to sell the already impressive level of detail in the simulation – the way that vacuum-raw sunlight throws shadows across your cockpit as you turn, or the fact that your overly-gauntleted hands are right there on the controls in front of you.

The fact it all looks superb shouldn’t be a surprise, so I won’t spend much more time saying it. And the single-player campaign, where I spent most of my time in Squadrons, really makes the most of environmental design. There are nebulae wracked with spooky space storms, classic tumbly asteroid fields, big space stations to fight around (with trenches to bomb, of course), and some pleasingly chaotic capital ship duels. 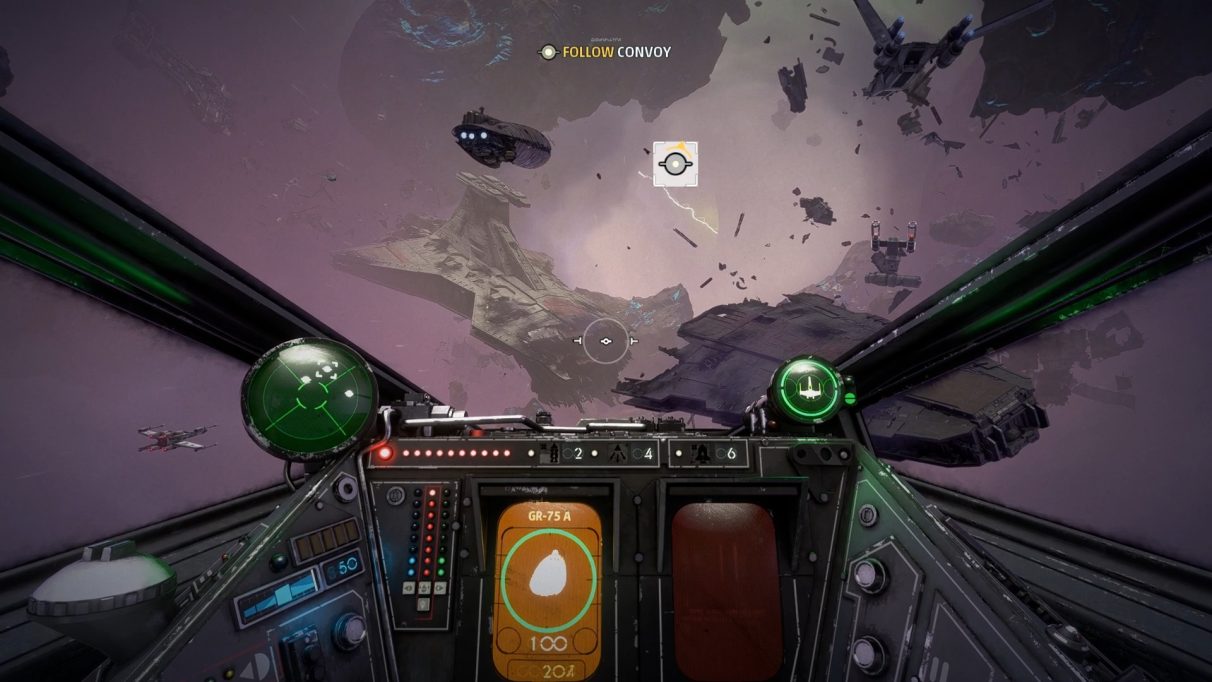 Coming across this wreck of an old prequel-era star destroyer was a lovely bit of Ye Olde Environmental storytelling.

Mission design is pretty varied, although it is rather by-the-book, with few surprises or sudden changes of plan. And while inevitably the Steam Comment Lords managed to complete the whole thing in twenty-eight seconds or whatever, I think you could comfortably fill a weekend with it, especially if you stop to chat with Frisk the Abominable Lizard in between briefings. 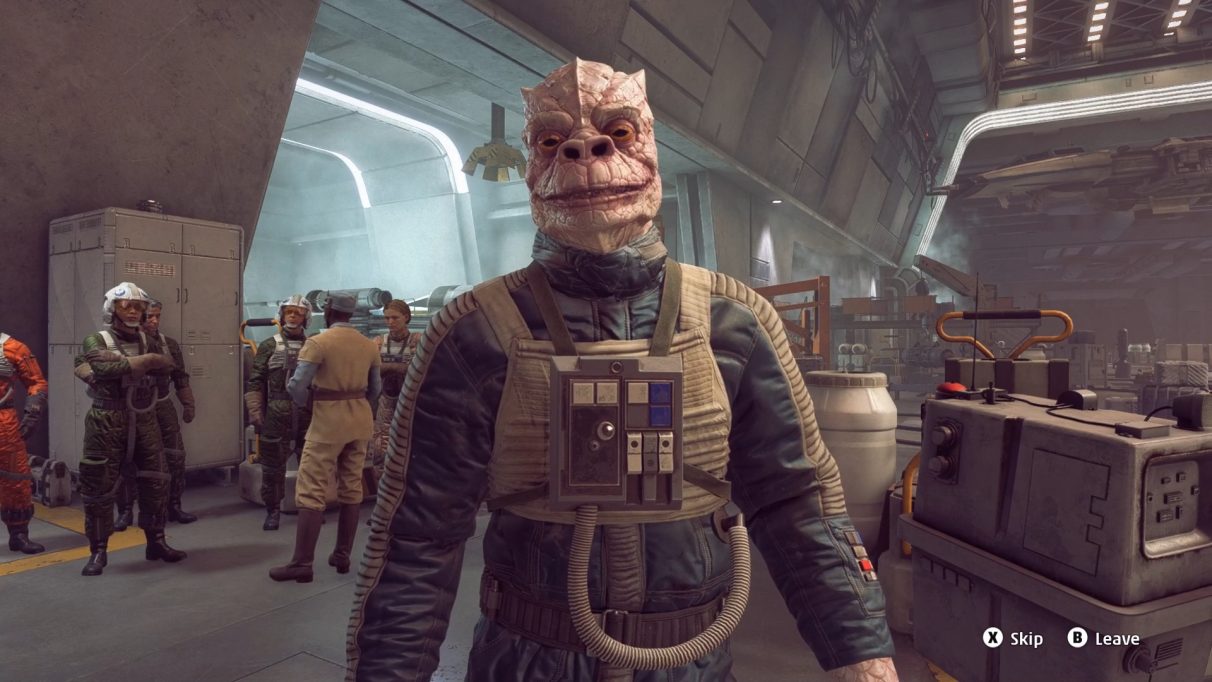 I hate him with my life.

But I suppose this is where I start wishing the game was more than it was.

I’ve no doubt that this is one of those games where the campaign exists to get you ready for the all-important world of multiplayer. And its 14 missions are pretty generous in giving you a good time beyond that. I couldn’t complain that it’s thin. But I’m just not really keen on multiplayer shooters of any stripe, and this is no exception. I’m fairly uncompetitive, lacking any sort of basal desire to beat people at games, I’m too slow-witted for one-on-one fights, and while I can enjoy team-based fighting, that’s only the case when I’m on a full team of mic’d-up people I know really well.

Squadrons is certainly set up for team play – the four ship designs on each side of the Star War complement one another, and both Empire and New Republic have access to a lovely chunky Support Boat which can be kitted out with buffs like shield projectors and tractor cannons for slowing down enemies. Things could get tactically fascinating with a whole squadron of people who know what they’re doing. But honestly, I already know I might manage to experience such a thing once, if I’m lucky. My mates are all in their thirties, and the admin involved in finding a time where everyone’s free for more then six overlapping minutes is less fun than just not playing at all. 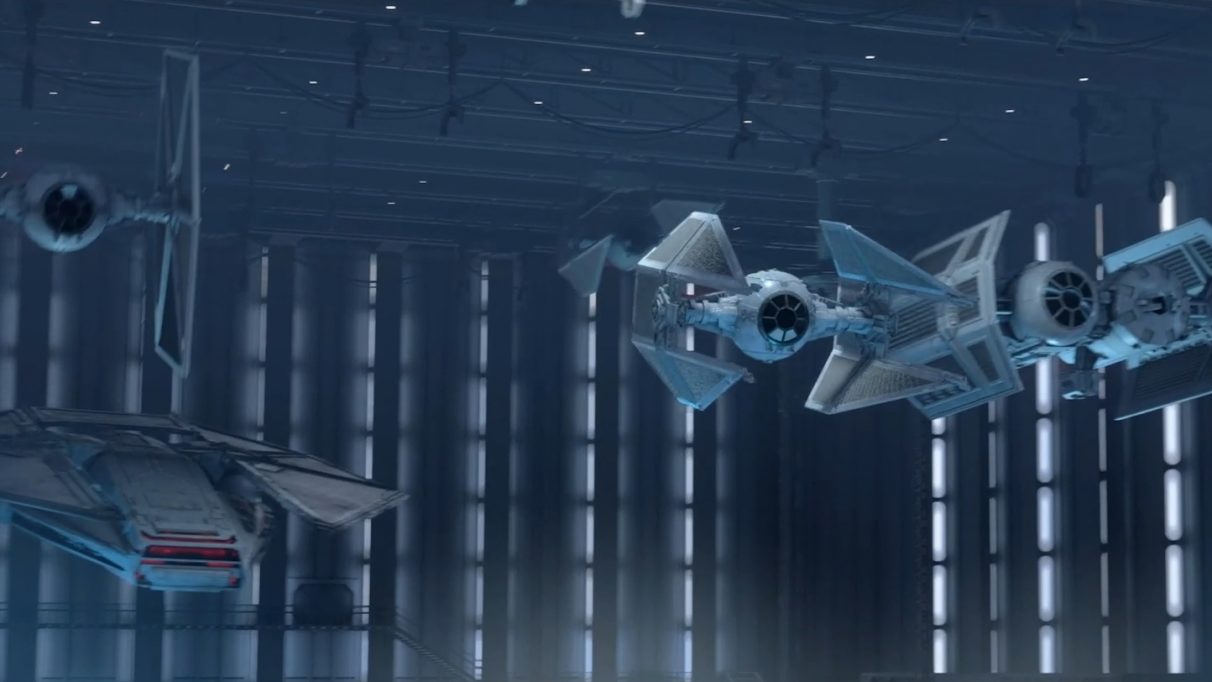 I’d love to see a Pixar movie about these lads actually.

That said, I did wade into multiplayer with randos for a few hours, trying out both the Dogfight (deathmatch) mode and the Battlefront-ish Fleet Battle mode, where you’re trying to push towards the enemy Big Ship to blow it up, and the enemy are trying to do likewise. Both modes were fine. But for me, it was the classic multiplayer combat experience: radio silence on my side (except the occasional amiable Frenchman, mumbling in short bursts from the heart of a collapsing crisp factory), and a pitiless raptor squad of born killers on the other side, functioning with the lethal efficiency of a hive mind. It’s just not for me. 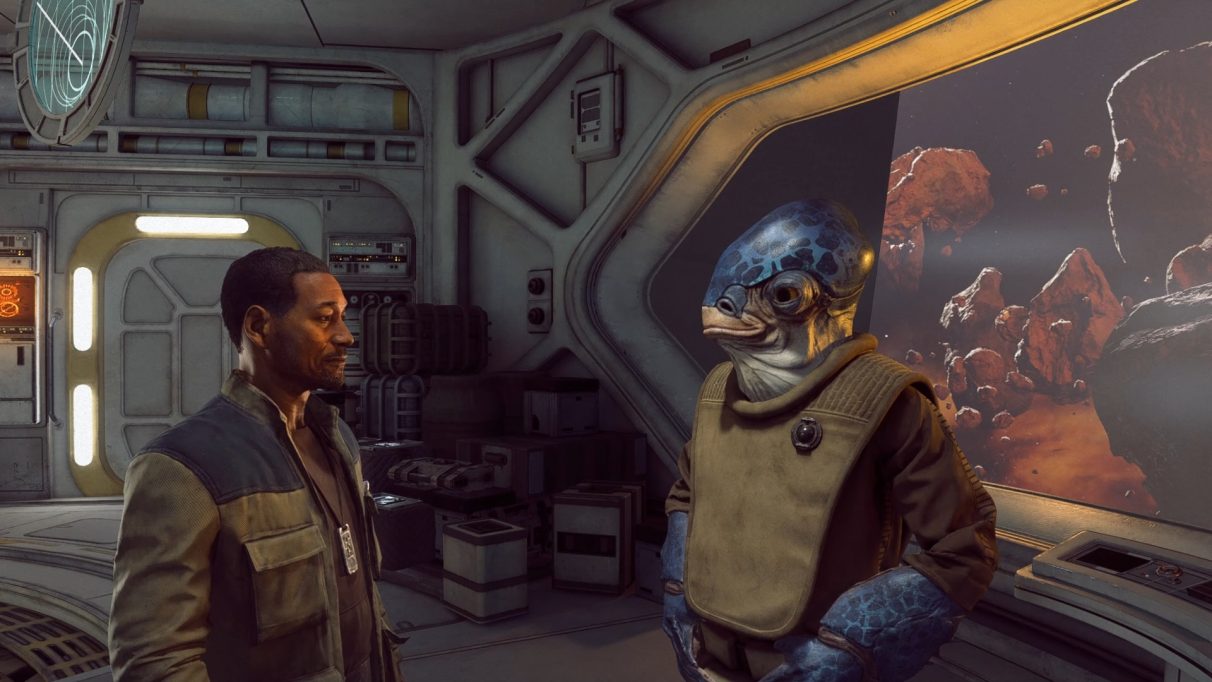 If it’s for you, then Squadrons is a cracker. And if you’re like me, it’s still very much worth the price of entry for the spectacle of the campaign. But oh, what it could have been. Without the balance considerations of multiplayer, there might have been more ships to fly, and more weird and wonderful bits of kit to outfit them with. And I would have happily sacrificed the cutscenes and characters, and tolerated a hefty dose of asset and environment reuse, just to have more missions to fly them through. Yes, I am afraid I am just longing for TIE Fighter. 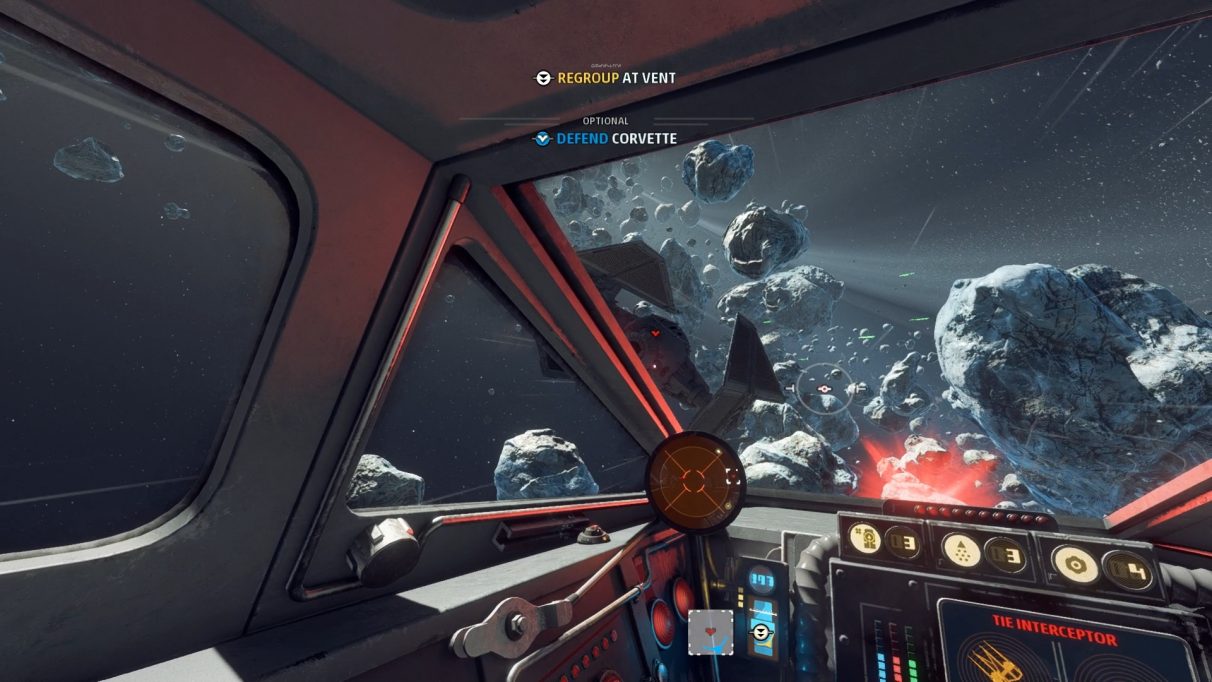 And out of respect to the writers, artists and voice actors involved, I should say I’m not dismissing the game’s story as worthless. It is stuck firmly and simplistically in the “good versus evil” thing, to the point where even the black-and-white moral universe of the original Star Wars movies looks nuanced, and I just can’t find that compelling. But within that, a solid job has been done. There are some fun characters on your squadrons – the aforementioned Abominable Lizard, for example, who is honestly so detestable I ended up relishing just what a pathetic wanker he was, and poor old Shen, an imperial pilot who’s 90 percent wounds, like a sort of off-brand Darth Vader, and won’t ever take off his space hat. 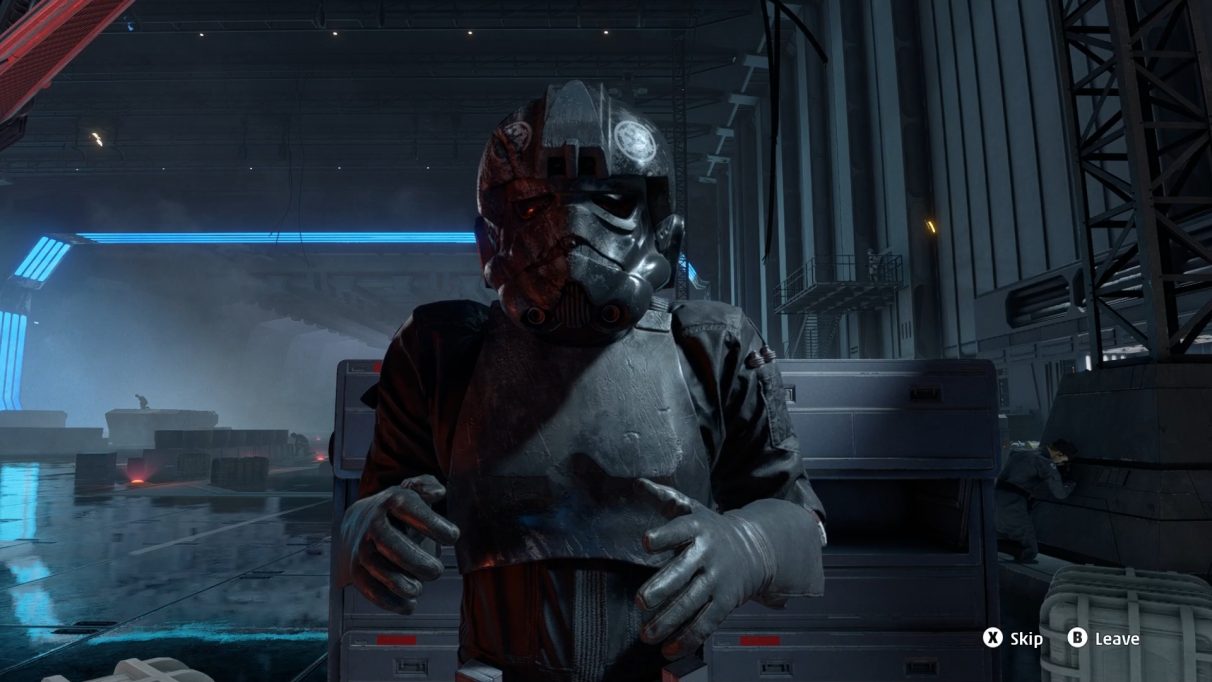 But you can’t talk to them, as you have no presence in the world that can’t be expressed with the pressing of a trigger. They just talk at you, dumping lore, until they decide it’s time for you to go away. The broader story is fun – it’s set in the chaos of the empire’s collapse into infighting after Return Of The Jedi, which I always loved reading about in the novels from back in the day – but it never does anything too surprising.

It is all, essentially, there just to string the fights together, because it would seem weird for a game this polished not to have such a thing. But honestly, and again respectfully, I would have happily missed out on it all for the sake of twice the number of missions, and a few more ships to take into them. Because when it comes to a space fighting experience, this is about as good as it gets.