As you roam the dark crypts and monster-filled plains of Baldur’s Gate 3 you’ll want to keep your party’s HP filled, as well as any spell slots for applicable party members. A great way to do so is by using rests. There are two kinds of rests available: short rests and long rests. Each has its benefits, which we’ll explain below.

In this Baldur’s Gate 3 guide:

How to short rest in Baldur’s Gate 3

To short rest in Baldur’s Gate 3, click the icon shown in the image below (it looks like a closed eye). 15 minutes of game time will pass, and your HP will be recovered somewhat. Short resting is the main way to heal up your party in between battles in Baldur’s Gate 3, without having to resort to potions or spells. The short rest can be triggered in most instances outside of combat. 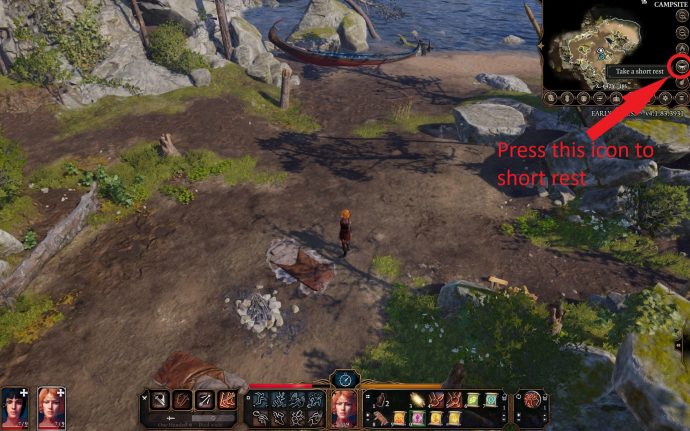 Some spells can also be refilled using short rest, while others require a longer resting period. Using short rest between battles is a great way to prepare your party for their next fight, as you’ll want to have access to as many spells as possible if things get hairy. You can only perform one short rest per long rest that you do. Once you’ve used this rest, you’ll see the icon greyed out, and will need to perform a long rest to access it again. You can hover over spells and abilities to see whether they need a short or a long rest to replenish them.

How to long rest

If you’re looking to replenish stronger spells and abilities you’ll need to long rest. This requires you to head to your camp. There’s an icon in the top-right of the screen that looks like a campfire. This cannot be selected during combat. Selecting this icon will take you back to your camp, so only do this when you’re finished with the area you’re in. You can also return to camp using purple waypoints found in the world. The first one you come across is outside the Dank Crypt area, where you first meet Shadowheart.

Once at camp head on over to one of the beds located around the campfire and choose to end the day. This will advance the game by eight hours, and trigger a long rest. Your spells, abilities and HP will be replenished. I recommend using long rest before exploring a new area, or before a tough battle.

There’s plenty more on Baldur’s Gate 3, right here on RPS. For a look at the game’s rather steamy romance scenes, head here. To read our thoughts on Larian’s new RPG, read our Baldur’s Gate 3 review.

Baldur's Gate 3: can you save the woman trapped in the Mind-Flayer pod?

During the opening section of Baldur's Gate 3 you'll come across a woman trapped inside a Mind-Flayer pod. Can you save her?