Now streaming live:
Space Crew review
Space Crew’s bouts of tactical damage control are a masterclass in controlled chaos. They’re hampered by a lack of choice in the management segments between them, but not enough to put too big a dent in the fun.

When three-man studio Runner Duck released management-tactics game Bomber Crew in 2017, it was rightly praised for turning the “move people around the parts of a large vehicle in an ever-increasing state of panic” aspect of roguelite classic FTL into a whole game. Followup Space Crew takes the action back into space. And while there’s a superficial level of similarity to FTL, with reactor power bars to be allocated, fires to be extinguished with atmosphere vents and all the rest, it’s a different beast.

Crucially, it’s built around the time-honoured structure of bracketing missions with time in a central hub, where you use space coins to upgrade your ship, its crew, their gear and their skills. That back and forth between frantic space missions and dopamine-soaked downtime at HQ is what makes Space Crew so compelling – but it’s also the source of some major, if fixable, limitations.

And it’s all balanced so deftly that you never, ever feel too in control. Space Crew makes you feel perpetually on the edge of catastrophic failure, but rarely tips you fully over. It’s got that illusionist’s quality that makes you feel like a genius for getting out of any scrape: it’s the James T Kirk mindset, neatly packaged for consumption. 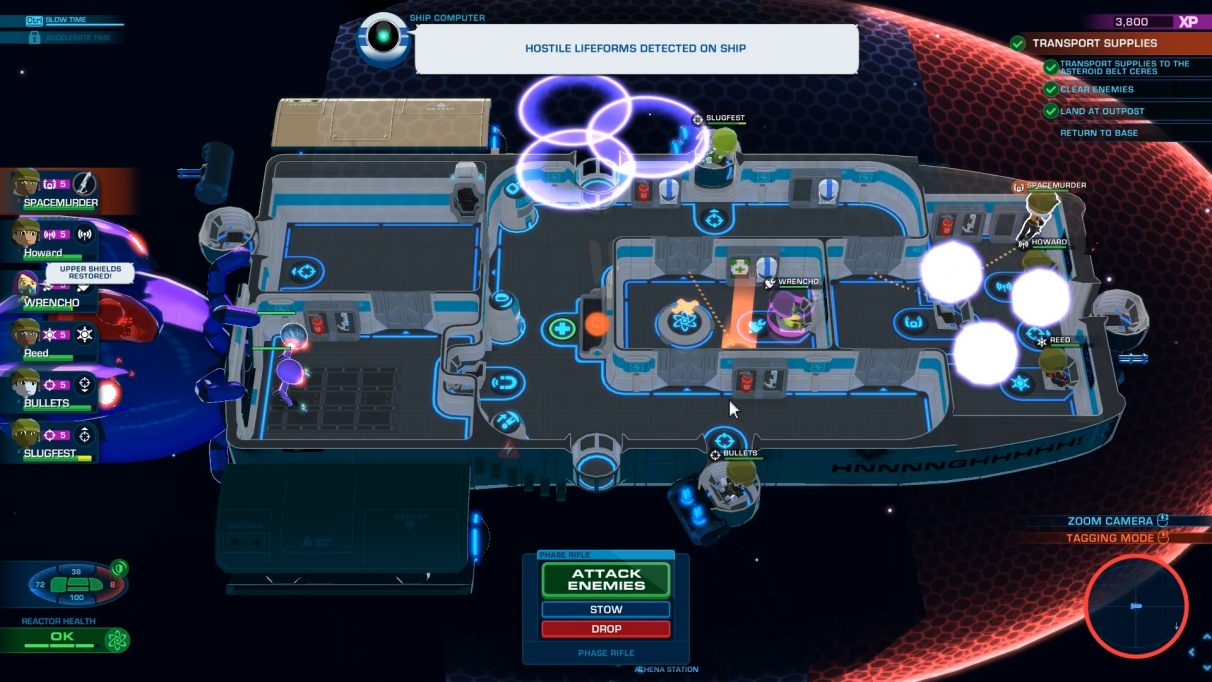 But every Kirk needs their redshirts, and you will see a good few permadeaths. The game does a good job of making losses feel like a real blow, without the sense that you’ve lost so much investment of time that you’re tempted into the ol’ task manager pseudo-savescum. Officers with sufficient experience can start developing another class’s skills, you see (a weapons officer can moonlight as an engineer, for example), and using these dual class folks to make ends meet while there’s a rookie on the crew adds a juicy challenge.

Crew death also brings me to the game’s single best feature, which is a simple in-game art UI, where you can design custom decals for your ship. When I lost my chief engineer, I decided he’d become one with the ship: I painted it an unpleasant flesh colour, daubed a grimacing face and beefy arms on it, and renamed it The Transformed Man. You can see it in the header image at the top of the post. When I lost a security officer later on, I added a second face to the ship, and painted the motto “We Were People Once” on its flank. Relaxing stuff. 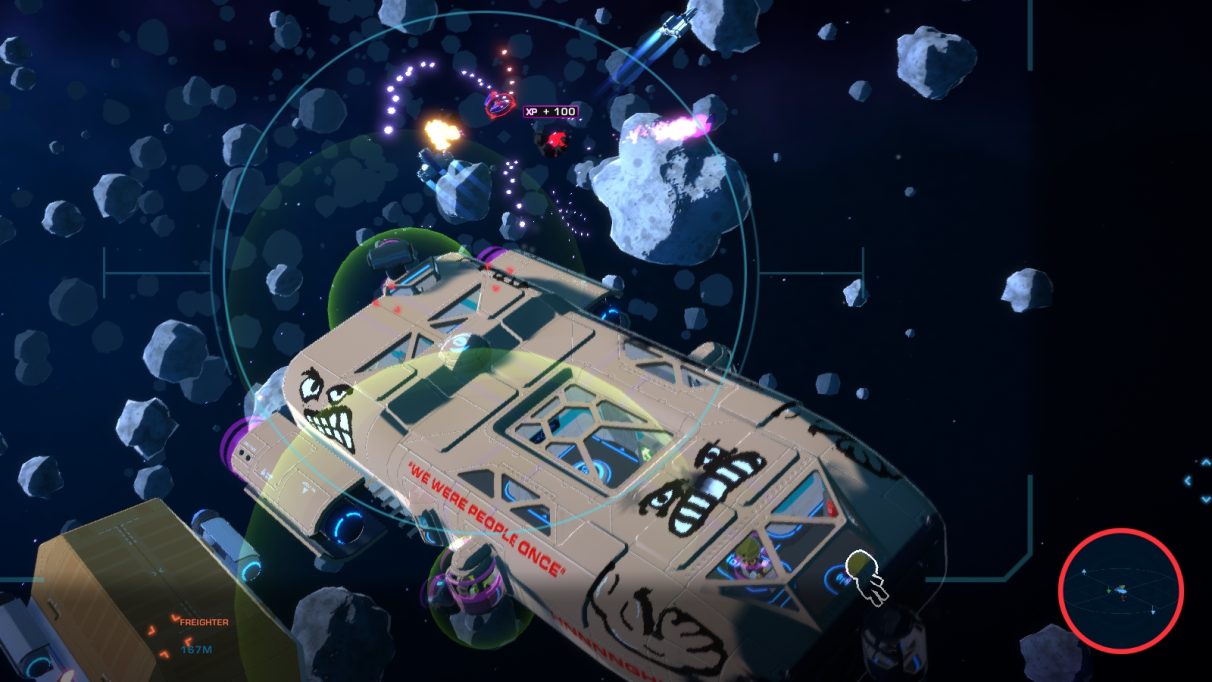 Might be my favourite screenshot of the year, actually.

My goodness, I don’t think I can remember feeling such delight at coming across a feature in a very, very long time. I’m absolutely sincere: it’s the best thing in Space Crew. One of the great challenges for a game like this is to make players feel personally invested in the assets they’re putting at risk, and this works even more powerfully than naming crew after your mates.

That’s why I’m mystified that the custom art feature wasn’t applied more widely – to crew uniforms, for example, or even crew faces. More frustratingly, there are only three decal slots free for custom art! Three! This is a crying shame. And I know it’s ignorant to be outraged that developers haven’t included a feature you’ve personally decided would be fun, but I’m stumped as to why there had to be a hard limit here. 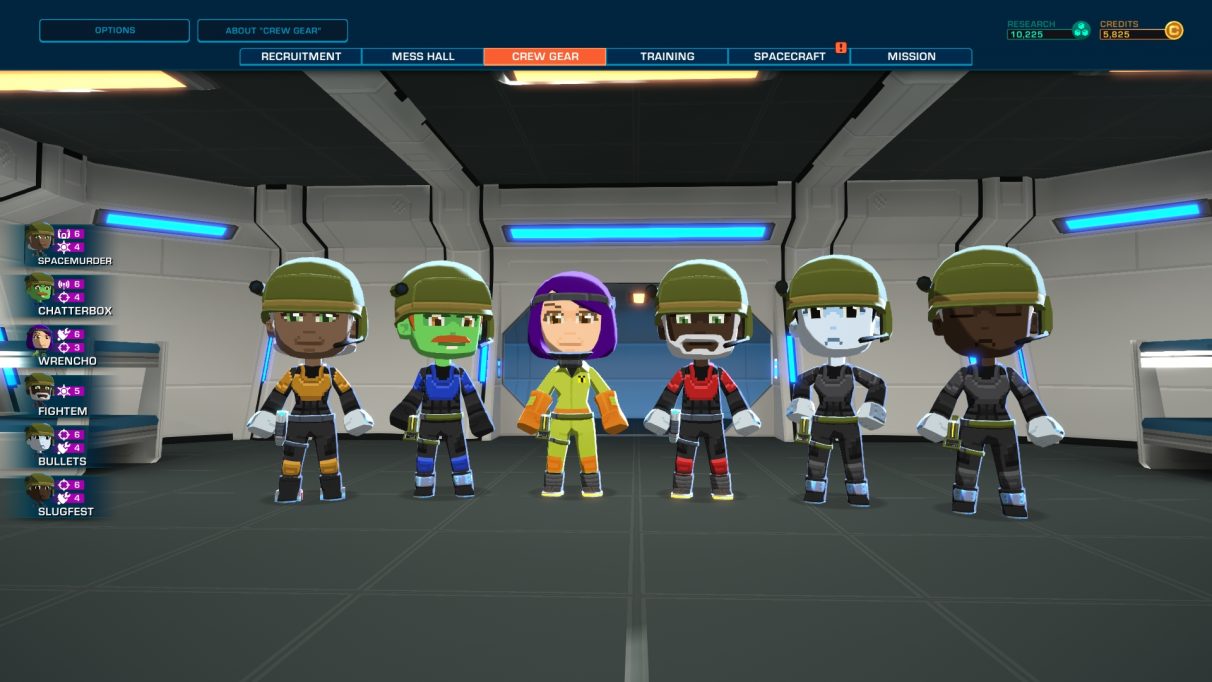 You can do some customisation – I’m quite fond of SLUGFEST and BULLETS, the grim pair on the right, who operate my broadside turrets.

And here’s the wider problem with Space Crew – it never manages to offer quite enough freedom.

As well as money to spend on upgrades, missions also win “research”, which unlocks new stuff for purchase. But you can’t choose which unlocks your research points go towards, or even which unlocks might be coming up next, so you miss out on a lot of interesting dilemmas. There’s a good variety of both ship and crew equipment, in the end. And there is room for specialisation, if you want your ship to be a shield-reliant glass cannon, or a tanky brawler. But realistically, you can never stray that far from obvious optimum builds. There’s only one ship model, too, and its internal layout and console locations are fixed.

The crew experience system, too, suffers from a lack of choice. Yes, you can choose which secondary skillsets they acquire, and there’s some headscratching to be done over what gear to give each of your six poor spacefarers, given the multiple tasks they’ll each be faced with on missions. But there’s no skill trees – just a linear set of skills for each officer type, unlocked in sequence. 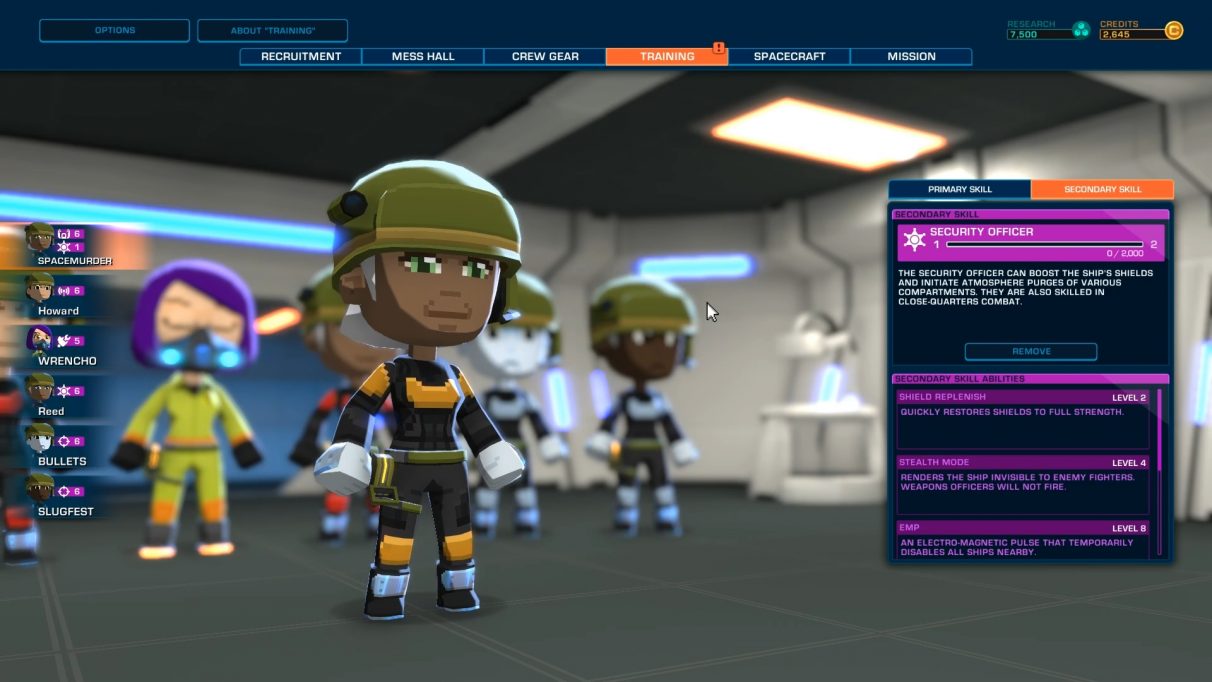 They look too pleasant for this life of putting out fires aboard a self-aware, gurning warship.

All these limitations have a cumulative effect, in that the less long-game pondering and micro-level tinkering you’re doing between missions, the more you notice grind. Since my inter-fight admin usually boiled down to “buy the good new thing if I can afford it”, I had more time to think about how I was doing the same few missions over and over again. It doesn’t help, either, that the game’s pulpy, Star Trek meets Starship Troopers aesthetic is quite light on both lore and colour. It doesn’t feel empty, but it doesn’t feel rich either.

All of these issues are fixable (some quite easily, I’d hope), and just a little extra content could do so much to hide the edges of the game. I hope it comes. Because the compulsion reactor at the heart of Space Crew is putting out more power than is currently being used. Towards the end of the first of the game’s three acts, I reached that dread moment where, upon finishing a mission, you’re suddenly just not so hungry for the next one. My finger hovered over the mouse, ready to tap once on MAIN MENU and then a second time on QUIT. But then I looked into the eyes of The Transformed Man, glowering up from the hangar like a pair of existentially agonised fried eggs, and I clicked on the MISSIONS tab instead. It was a close call, but we lived to fight another day. 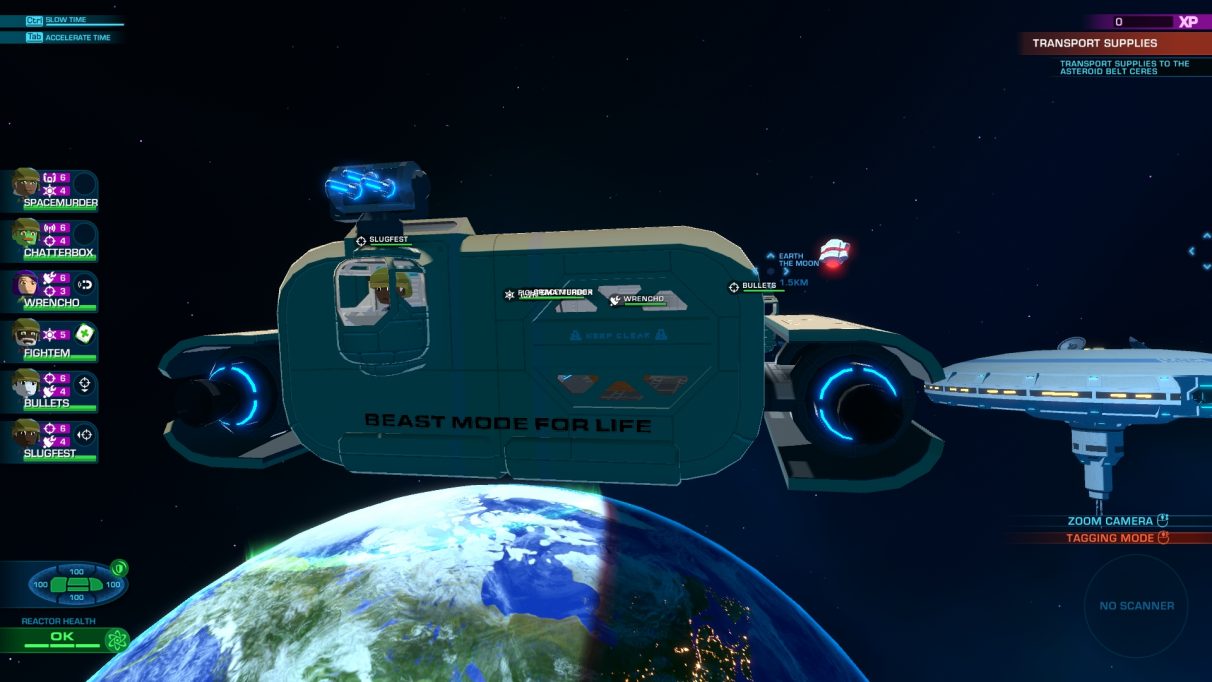