Logitech’s G733 Wireless headset combines all the best bits of my favourite gaming headsets. It has the ultra comfortable ski-goggle headband design of the Steelseries Arctis 7, the crystal clear Blue Voice microphone tech of Logitech’s ultra-fancy G Pro X headset, and at 278g, it’s also ultra-lightweight like Razer’s Blackshark V2. My favourite thing about the Logitech G733 Wireless, though, is the fact it’s purple. It’s purple with flashes of fluorescent green and yellow like a 90s shellsuit slap bracelet, and I utterly adore it. It’s fun, it’s playful, it’s refreshing, and it also sounds absolutely fantastic. If you’re looking for your next wireless gaming headset, the Logitech G733 Wireless should definitely be at the top of your list.

I should note that the G733 Wireless is also available in blue, black and white should you prefer something a bit more traditional, but even its plainer colour schemes manage to retain some of that mad 90s energy thanks to their multi-coloured headbands. There’s also a thin strip of RGB lighting down the front of each ear cup to complete its nostalgic, neon-fluoro look, although you can turn this off (and add another nine hours onto its default 20 hour battery life in the process) using Logitech’s easy to use G Hub software.

The Logitech G733 Wireless is a brilliant wireless gaming headset that delivers best in class audio in a fun and playful design, and the combination of its memory foam ear cups and suspension-style headband gives it proper all-day comfort.

Admittedly, the all-plastic construction of the G733 Wireless means it doesn’t really look like it should be a £130 / $130 gaming headset. I suspect this is largely to help keep the weight down, but it’s also nowhere near as stylish or premium-feeling as some of Logitech’s other high-end headsets, such as the gorgeous G Pro X, for example. This is arguably just as comfy and brilliant-sounding as the G733 Wireless, and can be had for just £100 in the UK at time of writing, and an identical $130 over in the US. Sure, the G733 Wireless lets you ditch the cables of the G Pro X in favour of a small (and matching colour) USB receiver with Logitech’s super fast Lightspeed Wireless tech built into it, but I’d still expect something a little bit fancier given the price. 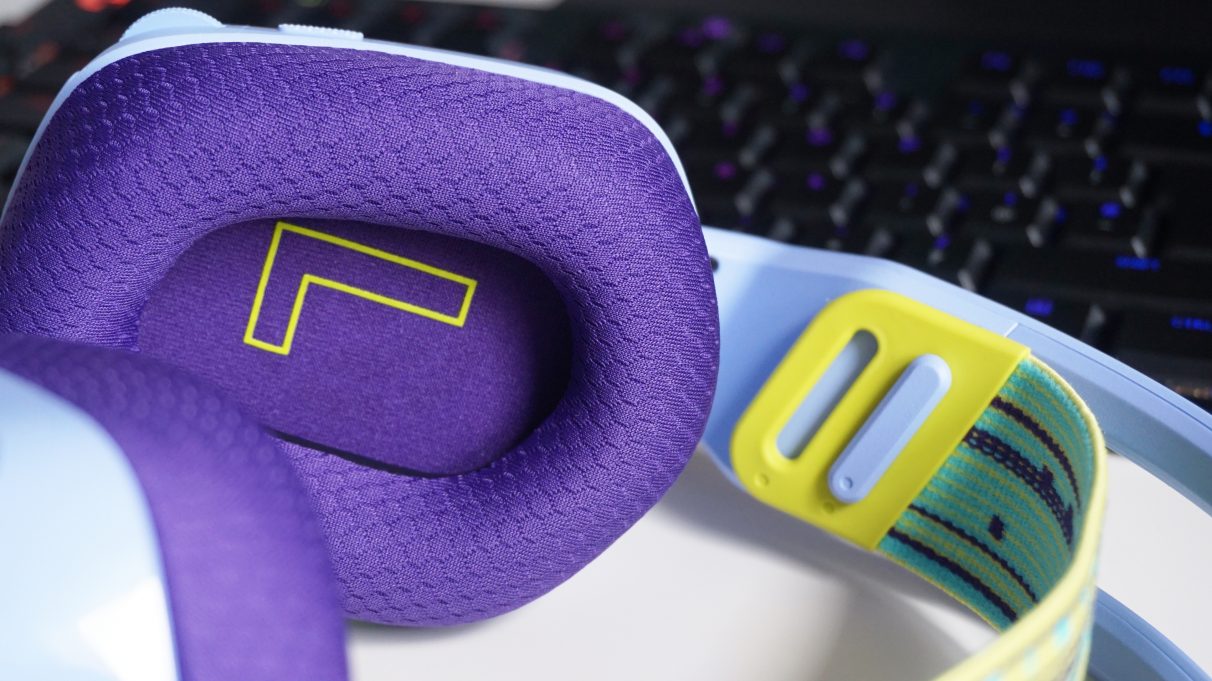 The headband is very easy to fit and adjust depending on the size of your head.

This is always a big plus point for me, but I was equally pleased to see it’s got loads of adjustment options, too. I must admit, I was a little worried that the G733 Wireless was going to be a touch too big for my (apparently) tiny head, as the headband’s default position meant the bottom of its (also very soft) ear cups were brushing up against my jaw. Thankfully, the headband itself can be easily removed and tightened thanks to its second adjustment slot, and there are sliders on each of the ear cups to adjust the height of the frame, too. Once I’d stuck all of these into their smallest, tightest positions, the fit was good to go.

Thanks to this headband, the G733 Wireless just about inches in front of Logitech’s G Pro X when it comes to overall comfort for me (although that, too, is still very, very easy to wear for long periods of time due to the sheer amount of soft padding it has). In terms of overall audio quality, however, they’re both pretty much the same – which is to say, excellent. 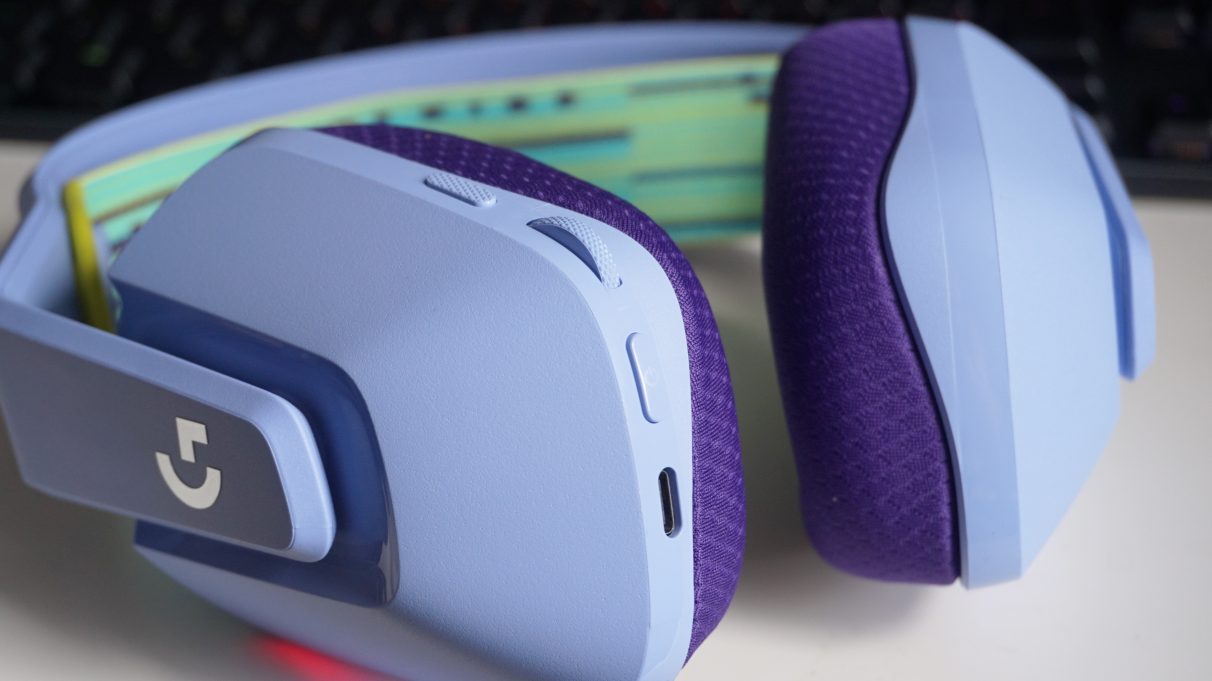 The G733 Wireless has three main controls: a mute button, a volume wheel and a power button. You can also charge it via its USB-C port.

In Doom, its metal and industrial soundtrack had plenty of oomph to it as I rinsed through its opening level, and the pump of my Super Shotgun felt deep and powerful at all times. The G733 Wireless also did a splendid job of letting me know exactly where each sound was coming from, too, whether it was an incoming fireball from a pesky imp or the far-off groan of UAC machinery on the surface of Mars. I was able to pinpoint everything happening around me, and it made for some brilliantly immersive gun fights.

Similarly, in Hellblade: Senua’s Sacrifice, the G733 Wireless handled the game’s binaural soundtrack brilliantly. The voices inside Senua’s head whipped and swirled around my ears like a haunting tornado of sound as I listened to the opening cutscene, and their natural-sounding voices sounded like they were coming from all directions rather than just the left and right ear cup. The dialogue was also well-balanced against the game’s finer audio details, too, including the gentle, delicate splashes of Senua’s oar, and the oncoming rumble of distant thunder.

The G733 Wireless was an excellent companion for the orchestral score of Final Fantasy XV, too, producing a warm, rich soundscape that was well-balanced against the zips, zaps and shouts of the game’s additional battle effects. Like Doom, it made for some very immersive listening, and I’d often forget I was even wearing a headset at all until one of my cats would jump on my desk and meow in my face for her tea. 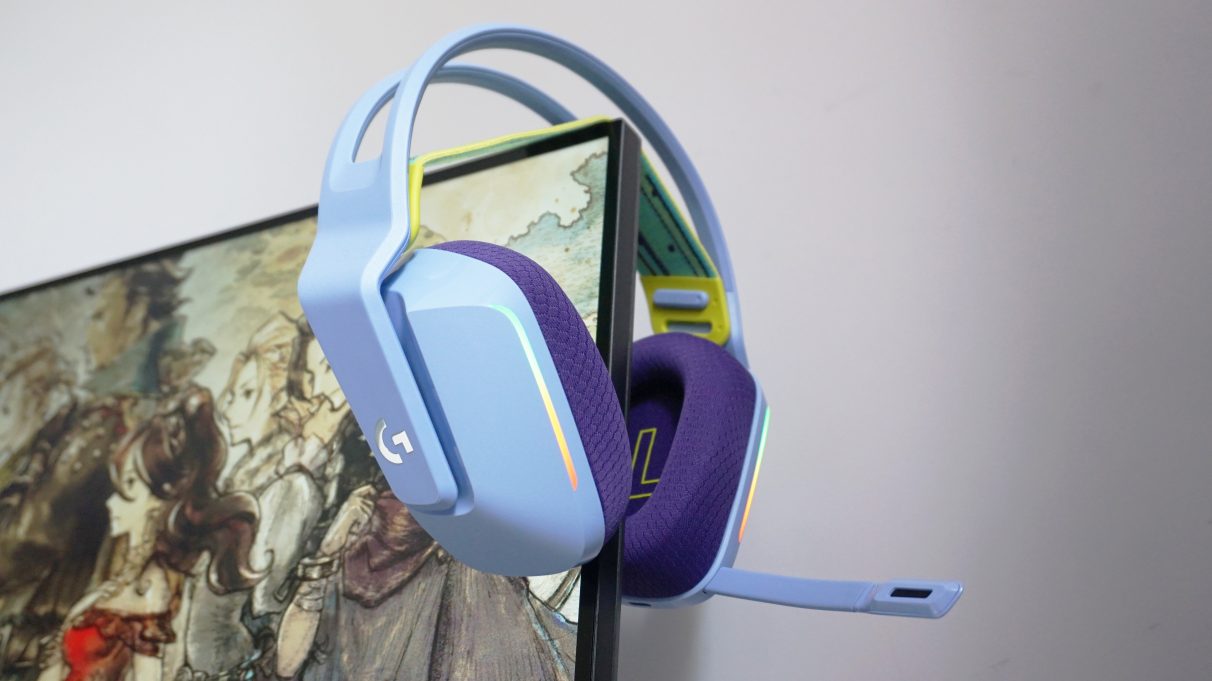 It’s not just games where the G733 Wireless excels, though. It’s also great for regular music listening, too. When I fired up my iTunes library, for example, the G733 Wireless handled everything from big band music and delicate piano solos to rock and pop songs with ease. Vocals came through loud and clear, and even busy instrumental tracks had plenty of detail in them, allowing me to pick out individual instruments and bass lines for some proper close listening.

What’s more, if you don’t like the headset’s default equaliser settings, you can easily adjust the treble and bass in Logitech’s G Hub Software, customise one of its equaliser presets to your liking, or create your own. I wouldn’t recommend turning on its DTS Headphone X 2.0 surround sound unless you’re watching or listening to something that specifically supports it, though, as the sound became very muddy and obscured when I tested it in the games I mentioned above and in my regular music listening.

You’ll also find the G733 Wireless’ microphone settings in G Hub, and here you can adjust the input gain, master output level and enable its Blue Voice filter. This is definitely worth turning on, as it made my voice recordings in Audacity much clearer and more professional-sounding than they were when it was turned off. Again, you’ve got plenty of presets to choose from here (I’d recommend one of the two Broadcaster settings for the best results, but the AM Radio option is quite fun as well if you want to pretend you’re a crackly radio DJ when chatting to your mates online), but you can always create your own if you prefer. I’d also recommend switching on the G733 Wireless’ sidetone settings if you like being able to hear yourself while you speak, although you’ll find this option in the main headphone settings rather than the microphone tab. 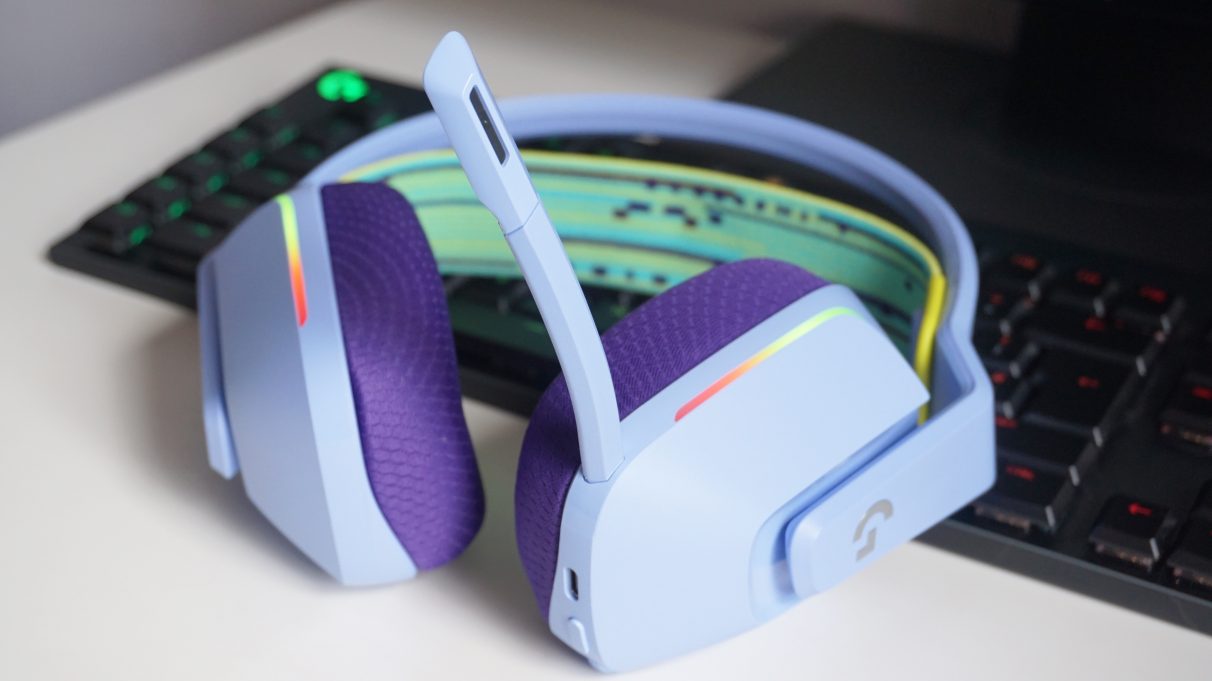 You can change the function of the G733 Wireless’ rear control button with G Hub, too. It’s set to mute your mic by default (and beeps to let you know you’ve pressed it, too), but you can also assign other audio commands to it instead, such as cycling through different equaliser presets or increasing / decreasing the sidetone to name just a few available options. You can even use it for specific Windows shortcuts such as locking your PC, Alt-Tabing between windows, or opening File Explorer if you fancy being more adventurous, as well as all manner of keyboard buttons, your own macro commands, other system functions related to your mouse or media playback, or individual app commands in OBS, Discord or Overwolf. Simply put, you’ve got plenty of options for that rear button, although the default one is arguably the most useful day-to-day.

Still, all that would be for naught if it wasn’t easy to find and use, but thankfully its textured finish makes it instantly distinguishable from the smooth power button just below it, so you shouldn’t suffer any accidental power-downs when you’re just trying to take a glug of tea. Logitech’s helpful and practical touches don’t end there, either, as tapping the power button will also give you a handy spoken reminder of how much battery you’ve got left, too, and the headset will automatically enter low battery mode when you hit 15% – at which point you can set its LEDs to turn red as another helpful reminder to charge it up once you’re done. Finally, the chunky volume wheel has a nice, tactile feel to it as well, softly clicking up and down as you roll it under your finger. It’s a lovely sensation, and it makes it much more pleasant to use than other, ultra-thin ones I’ve seen on other gaming headsets. 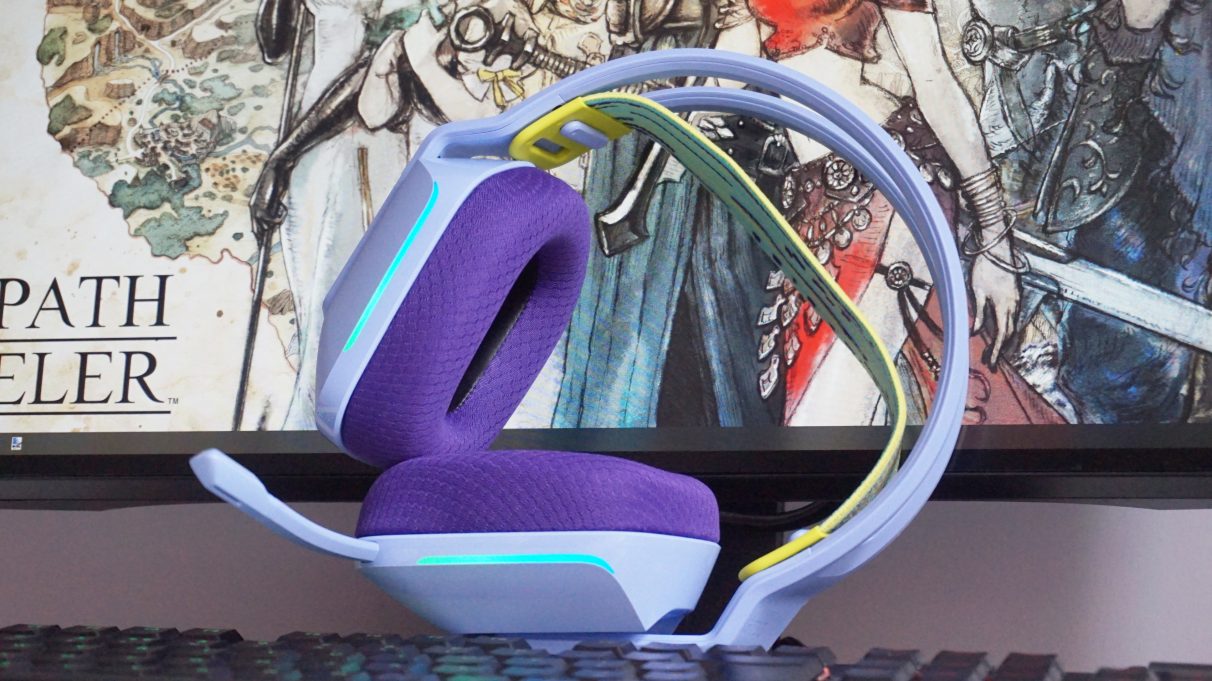 All in all, the Logitech G733 Wireless is another outstanding gaming headset that ticks all the right boxes. Yes, its overall look and feel might not scream £130 / $130, but its excellent audio quality, supremely high comfort levels and flexible, practical controls more than make up for it in my eyes. Its wireless range of 20m is also more than enough for your average room, and Logitech’s Lightspeed tech has yet to let me down when it comes to speed and latency, too – even with dozens of other wireless devices in my house.

If you’re not fussed about wireless, then I’d probably recommend opting for the cheaper Logitech G Pro X instead, but if you’re desperate to ditch those pesky cables, then the G733 Wireless is an excellent choice. It’s cheaper than the Steelseries Arctis 7, comfier than Corsair’s budget-oriented HS70 Wireless, and it beats both of them on battery life, too. It’s a real winner.