When I first saw Asus’ ROG Zephyrus G14 laptop back in January this year, I was struck by just how ‘normal’ it looked. Sure, it had a mad LED matrix display on the back of its lid, but at a glance, I’d have pegged it as a regular everyday laptop that was only fit to play the smallest of 2D indie games. Instead, it had an RTX 2060 graphics chip and one of AMD’s new Ryzen 7 4800HS processors inside it, giving it some serious gaming chops underneath its (relatively) plain-looking chassis.

The ROG Zephyrus M15 on test today is the larger, Intel equivalent. Apart from the slight increase in size from a 14.1in display to a 15.6in one, the M15 has the same unassuming design as the G14 (minus the LED matrix display), making it one of the least gamery-looking laptops I’ve tested all year. It’s something I wouldn’t be embarrassed to get out in public, which is always a plus point in my books, and at 1.9kg and just under 20mm thick, it’s not an absolute brick, either.

The Asus ROG Zephyrus M15 would be a great entry-level laptop for 1080p gaming if its fans weren’t so gosh-darn loud.

We’ve already seen what Intel’s eight-core Core i7-10875H chip brings to the table in the excellent Lenovo Legion 7i, but the six-core Core i7-10750H still packs plenty of punch when it comes to daily desktop tasks and playing games. When I tested it with Cinebench’s R20 benchmark, for example, the 10750H finished with a single core score of 457 and a multi-core score of 2989 – putting it just 5% and 19% respectively behind its beefier sibling. That’s more than enough speed for everyday use, and I found it perfectly competent when doing a bit of photo editing for work, too.

It’s a great companion for its GTX 1660 Ti graphics chip, too, and together with that aforementioned 16GB of RAM, I was able to hit close to or above 60fps in almost all of today’s biggest and most demanding games on High to max settings at 1920×1080. In Shadow Of The Tomb Raider, I saw an average of 70fps on Highest with its entry-level SMAA anti-aliasing effect enabled, and I was also able to get an average of 61fps in Final Fantasy XV on Highest as well (albeit with none of the game’s extra Nvidia effects switched on). 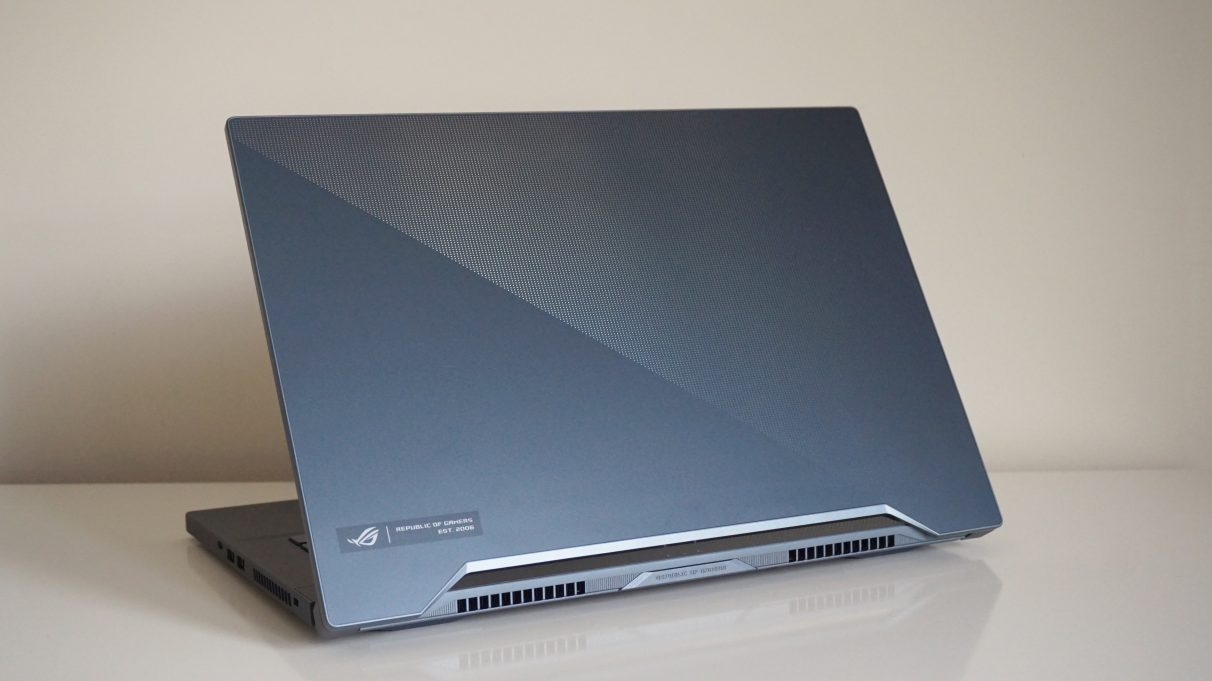 The ROG Zephyrus M15 has the same design as the AMD-based G14, including an identical dot-pattern on the back of its lid – just minus the built-in LED matrix.

Monster Hunter: World put in a good performance on Highest as well, averaging a perfectly playable 51fps, but you’ll no doubt feel more comfortable (and make better use of that 144Hz refresh rate display) on High, where I saw an average of 75fps. Total War: Three Kingdoms was a bit of a struggle on Ultra, averaging 43fps in its battle benchmark, but this quickly rose to a much more pleasant 62fps when I ran it again on High.

As for well-optimised games such as Forza Horizon 4, you’re off to the races. The Zephyrus M15 managed a silky smooth average of 97fps on Ultra, which jumped up to 117fps on High. Older games such as The Witcher III are capable of reaching similar speeds as well. On Ultra, I saw an average of 59fps riding around the forests of White Orchard, but this rose to 78fps on High and 107fps on Medium. All in all, very satisfactory stuff. 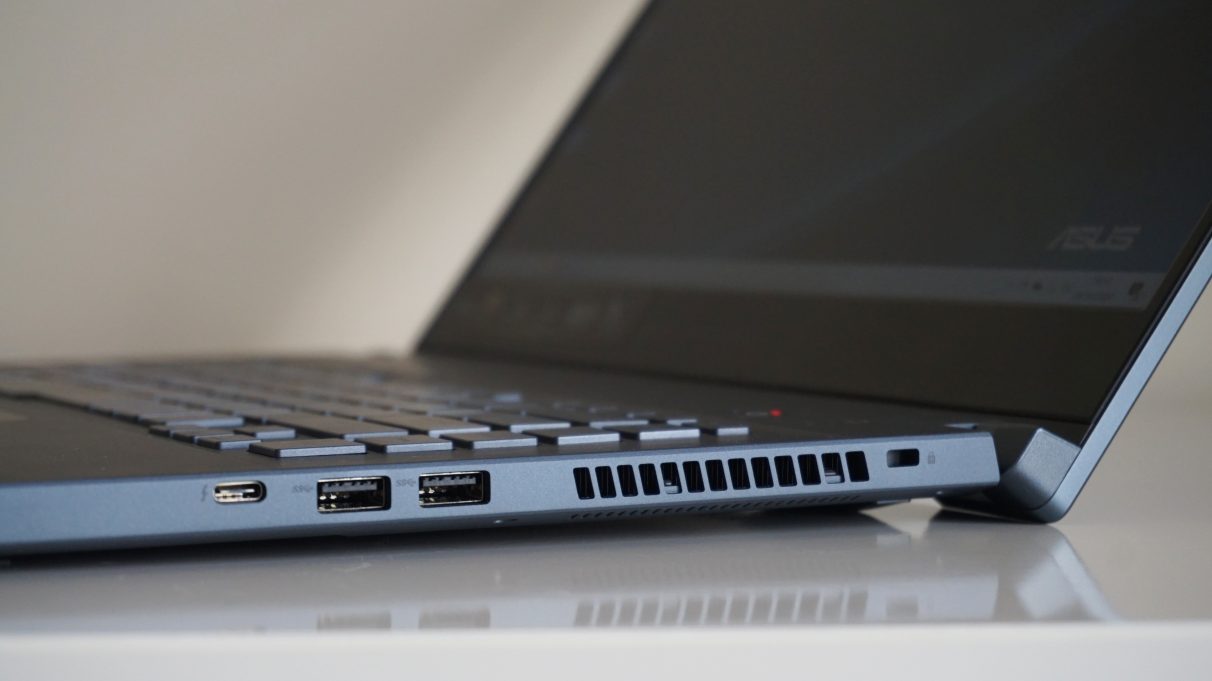 At least from a numbers point of view. In practice, my biggest issue with the Zephyrus M15 is the sheer amount of noise its fans make. They’re set to Performance mode by default, which is what I used to obtain the results I mentioned above, but there’s also an even noisier Turbo mode and a quieter Silent mode. The latter is what I would deem acceptable if I was playing games in a public space with the Zephyrus M15, but its Performance and Turbo modes are downright obnoxious if you’re within earshot of another human being. Heck, even I was reaching for my headset when I was hauled up alone in my home office, as I couldn’t stand to listen to them whirring away while I was using it.

This rather negates the whole, “I definitely wouldn’t be embarrassed to take this laptop out in public” idea, as while I wouldn’t be blushing over its design, I’d definitely feel awkward about its anti-social noise levels.

Alas, while gaming is possible using the M15’s Silent mode, you end up severely hampering its performance as a result. While not entirely surprising given the thermal constraints of laptops in general, I was disappointed to see just how much of a toll it took compared to its Performance mode. 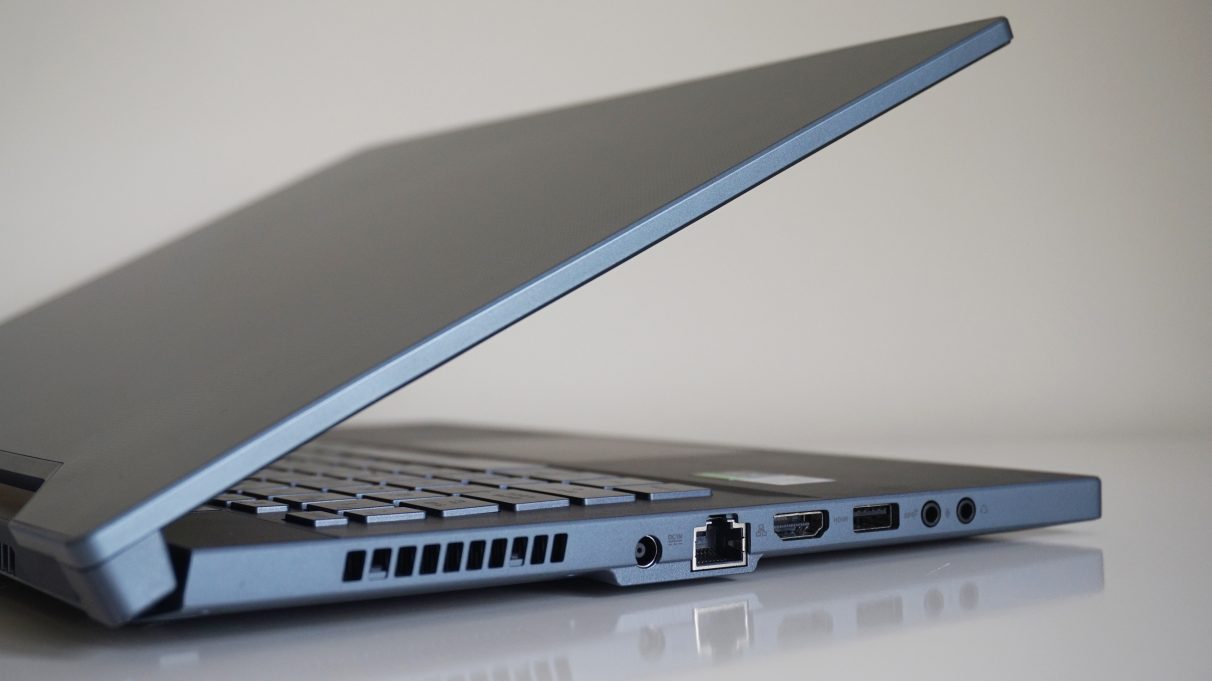 The Asus ROG Zephyrus M15 also has another USB 3.2 port on the other side (a Gen 2 one, no less), plus an HDMI 2.0b output, dedicated headphone and microphone jacks and an Ethernet port.

The starkest difference was in Monster Hunter: World. While it was able to hit similar frame rate highs in the low 70s on High, for example, it was a lot less stable overall. Whereas Performance mode didn’t see the frame rate drop below 69fps on High, switching over to Silent mode saw it violently lurch down to 46fps pretty regularly. Monster encounters were even worse, with the frame rate barely above to stay above 30fps. When I whacked those fans back up to Performance mode in the same fight, the game literally doubled its frame rate, transforming from a juddering mess into a lean, mean monster-slicing machine.

Other games weren’t quite as bad as this, but Shadow Of The Tomb Raider also refused to go much higher than 45fps in its built-in benchmark, slowing to a crawl in the latter stages of the benchmark after running perfectly fine at the start, and Assassin’s Creed Odyssey saw average drops of around 7-10fps as well. It’s a shame, as it means you pretty much have to put up with those rocket jet fans if you want to get decent gaming performance. It made me miss Lenovo’s Legion 7 quite a lot as a result, as that laptop’s noise levels felt much closer to the M15’s Silent mode than anything else.

I also missed the Legion 7i’s lovely display, too. Asus describe the M15’s 15.6in, 1920×1080 screen as having an “IPS-level” panel, but my X-Rite i1 DisplayPro calibrator showed it was only displaying a fairly average 58.9% of the sRGB colour gamut. While this is a pretty common result among laptop displays, colours were noticeably less vivid and vibrant compared to the Legion 7i’s stunningly accurate 99.4% coverage, and games and images weren’t nearly as punchy as a result. They still looked perfectly all right in the flesh, but I’d only describe them as “fine” rather than “stunning”. 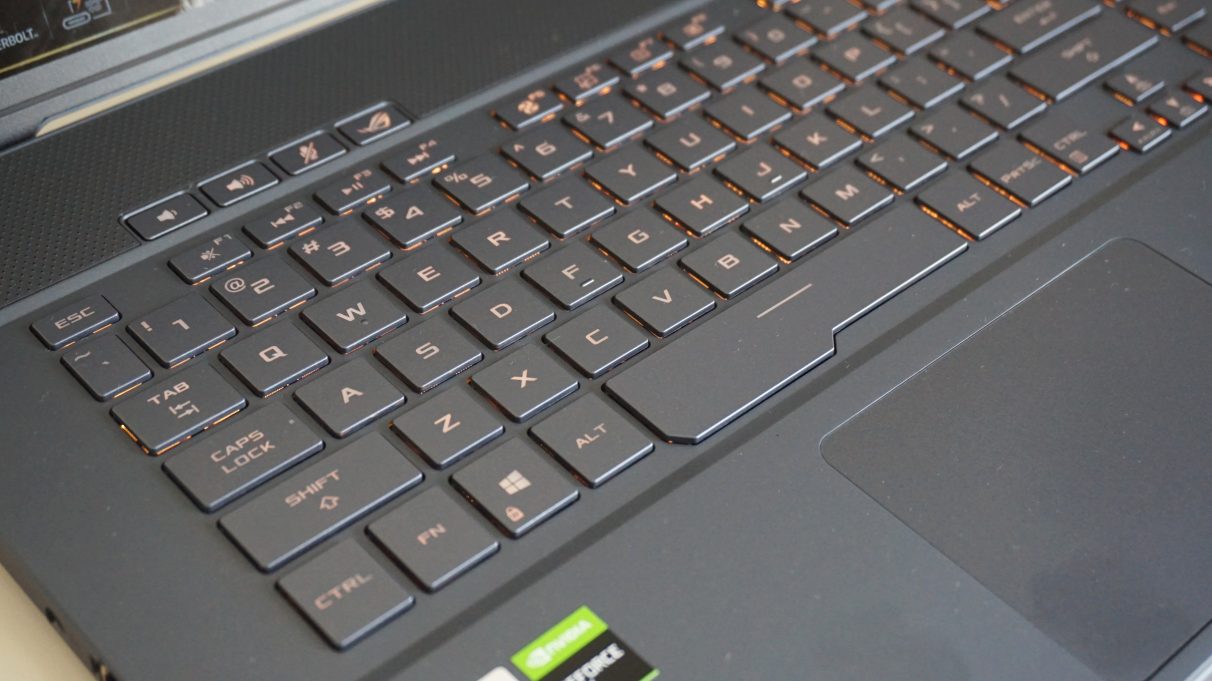 It wasn’t all bad news, though. While the display’s peak brightness of around 286cd/m2 is a bit on the low side compared to other gaming laptops, it was perfectly fine for everyday use, and just about enough to cope with the odd period of very bright sunshine, too. Plus, I recorded a very decent contrast ratio of 1394:1, and a low black level of 0.20cd/m2 (the closer to 0.00cd/m2, the better), ensuring there was lots of detail in dark shadow areas of games and photos.

I don’t have any complaints about the M15’s keyboard, either. While there’s still a teensy bit of flex to be seen in the keyboard tray if you really mash down on its central letter section, it’s a lot less noticeable than it was on the Legion 7i, and each key provides plenty of travel and tactile feedback. I didn’t have any problems getting up to full typing speed, either, and I rarely found myself making mistakes while typing long word documents. Most importantly, the WASD keys remained lovely and cool to the touch even when the fans were kicking up a storm underneath. Certain areas of the M15 got pretty toasty while playing games, such as the number keys and the empty zones between the keyboard tray and the side exhausts, but thankfully the rest of it remained unaffected.

Finally, Asus have included a very nippy Intel SSD in the M15, so everything from loading times to file transfers felt pretty darn quick. When I put it through AS SSD’s 1GB random 4K benchmark, for example, the M15 returned a random read of 48MB/s and a very nippy random write speed of 113MB/s. Both of these are just ahead of the results I saw on the Legion 7i, and they even beat Asus’ fancier Zephyrus Duo 15‘s scores as well, making it one of the faster gaming laptop SSDs I’ve tested. 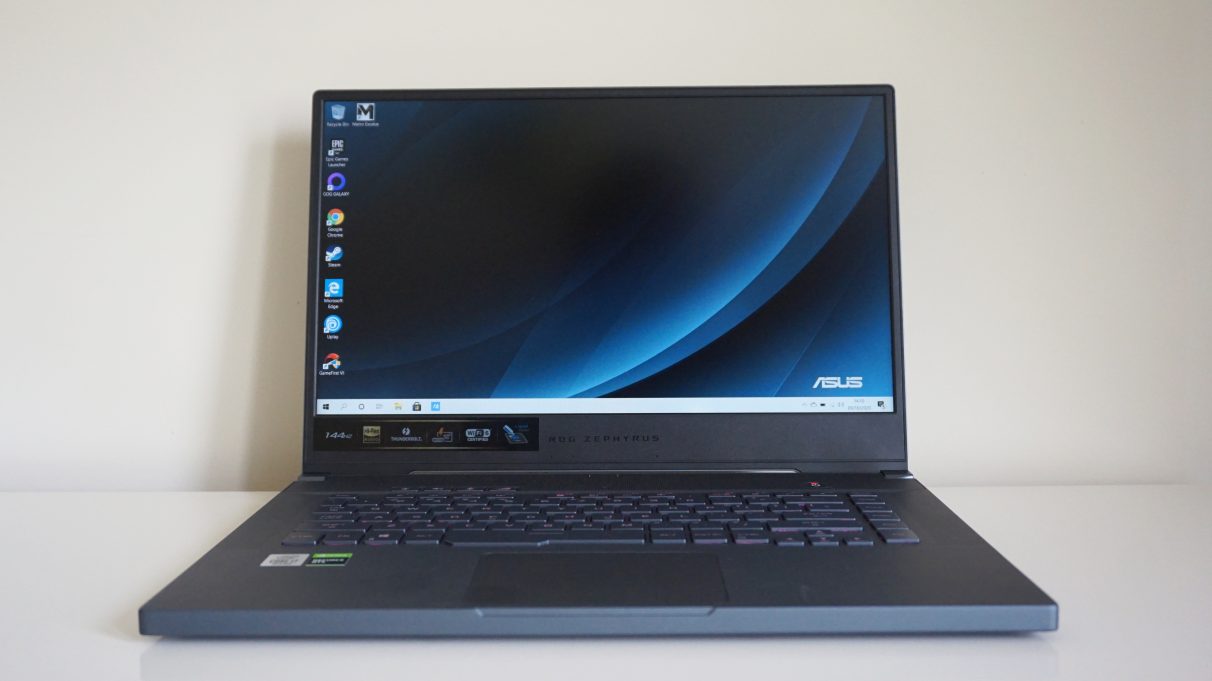 It’s just such a shame about the M15’s fan situation. It would be pretty easy to recommend if it wasn’t so noisy, as even the entry-level model’s GTX 1660 Ti graphics chip and Intel Core i7-10750H CPU have shown themselves to be a pretty potent combo when it comes to overall gaming performance, and its fast SSD, excellent keyboard and great selection of ports make it a very capable workhorse, too. Its display could be better, but that, too, is perfectly adequate compared to the competition, and it’s not a brute to carry around with you, either.

If you aren’t fussed about fan noise, then the GU502LU model of the Asus ROG Zephyrus M15 I’ve tested here would make a fine gaming laptop for $1149, although at time of writing it doesn’t appear to be available in the UK just yet.

Indeed, the only UK model that seems to be on sale right now is the 4K, RTX 2070-powered GU502LW model for £2000, which is a much less sensible set of specs than the 1920×1080 GTX 1660 Ti model I’ve tested here. I’m not particularly enamoured with 4K laptop screens at the best of times, and given my experience with other RTX 2070 laptops, it’s certainly not going to be powerful enough to make the most of it when it comes to playing games on it, either. As a result, I’d probably steer clear of the M15 in the UK for the time being, as I don’t think the available specs are worth the extra cash. For that kind of money, you’re much better off buying something like the Lenovo Legion 7i.