AMD’s Big Navi GPUs have finally been unveiled. Officially revealed during tonight’s RDNA 2 event, AMD’s Big Navi GPUs will be known officially as the Radeon RX 6000 series, and there will be three graphics cards in AMD’s initial Big Navi line-up. Launching worldwide on November 18th, prices for AMD’s next generation of graphics cards will begin at $579. Leading the pack is the RX 6800 XT, which looks to take on Nvidia’s RTX 3080, while the regular RX 6800 will be bringing the fight to Nvidia’s RTX 3070. Then, on December 5th, the super-powered RX 6900 XT will arrive to tackle Nvidia’s RTX 3090.

Here’s everything you need to know about AMD’s hotly anticipated Big Navi GPUs from tonight’s RDNA 2 event, including all of their respective prices, specs, performance figures and that all-important release date.

This means the XT variants of AMD’s Big Navi GPUs will be cheaper than their respective RTX rivals, but the RX 6800 is more expensive than the RTX 3070.

AMD have also confirmed that the RX 6000 family will run at 37dB while gaming, so fingers crossed they won’t be too noisy under load. In a separate video, they have also emphasised their “thoughtful” GPU design compared to Nvidia’s monstrously large RTX 30-series, stating that each card has been designed for the standard 10.5in motherboard length we’re used to seeing in PCs and will take up a maximum 2.5 slot width, so you shouldn’t have to buy a new case in order to fit them in – a problem that’s been rife on certain models of RTX 3080 and RTX 3090 cards I’ve tested so far. 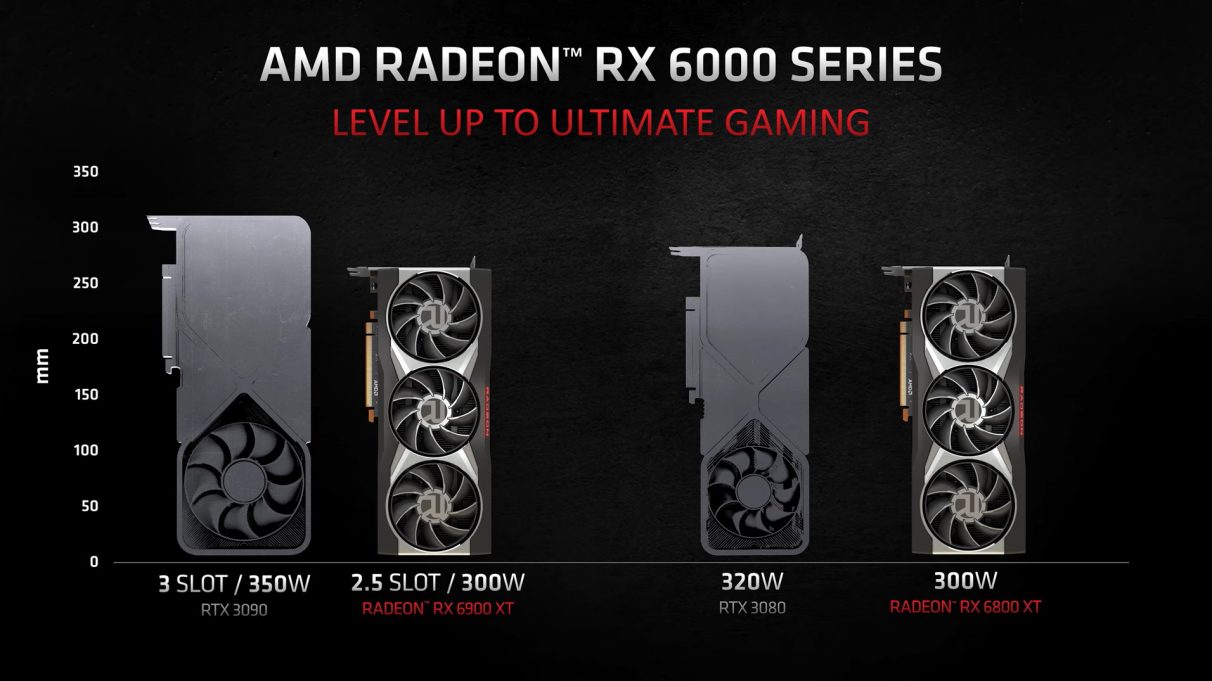 Everything you need to know about RDNA 2

Sitting at the heart of AMD’s Big Navi GPUs is their new RDNA 2 architecture. Based on their existing 7nm manufacturing process, RDNA 2 brings several key performance improvements over their RDNA 1. This includes high-performance compute units that are 30% more energy efficient than before.

RDNA 2 also introduces what AMD are calling their “Infinity Cache“, which functions in a very similar way to the large L3 cache on their Ryzen 5000 CPUs. In Big Navi, this aims to minimise DRAM bottlenecks and reduce latency and power consumption, as well as deliver twice the effective bandwidth of a traditional 256-bit interface to help push those 4K frame rates. 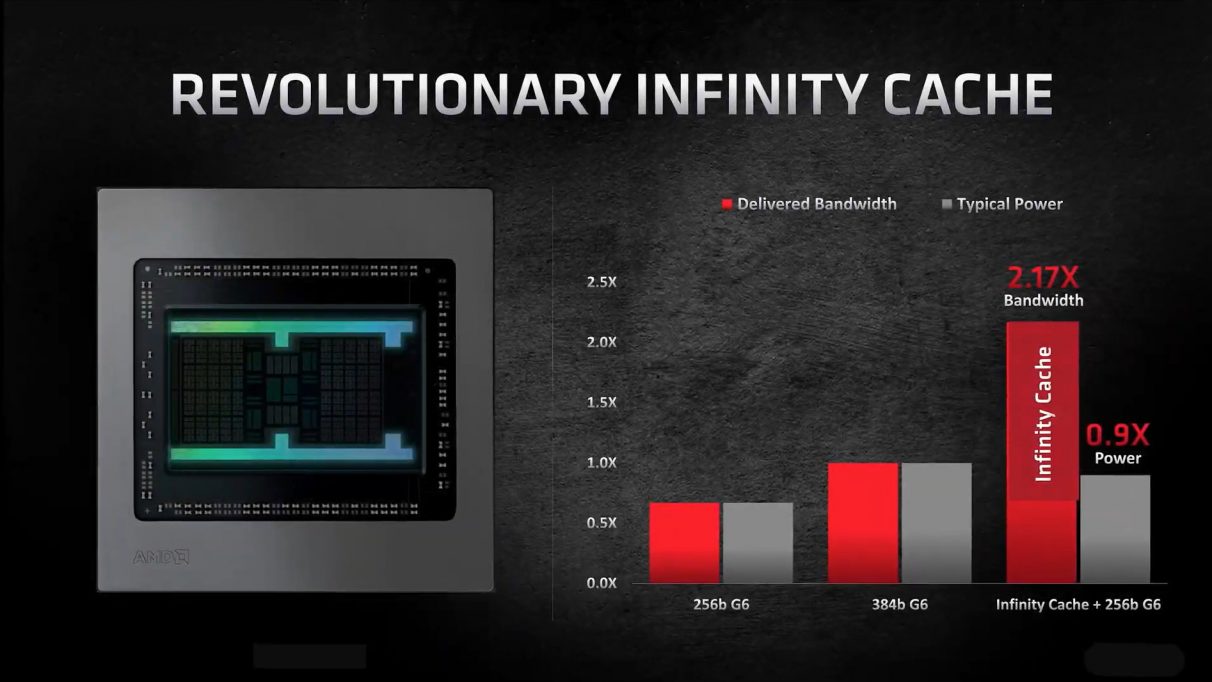 AMD’s RDNA 2 architecture has also allowed them to push graphics card clock speeds even higher than before – up to 30% faster frequencies than what they were able to achieve with RDNA 1. This in turn allows for a 54% increase to performance-per-watt over RDNA 1.

Overall, RDNA 2 should allow for around 2x performance at 4K compared to AMD’s previous generation of graphics cards – although that’s not exactly difficult considering the RX 5700 XT was really only ever intended to be a 1440p card. 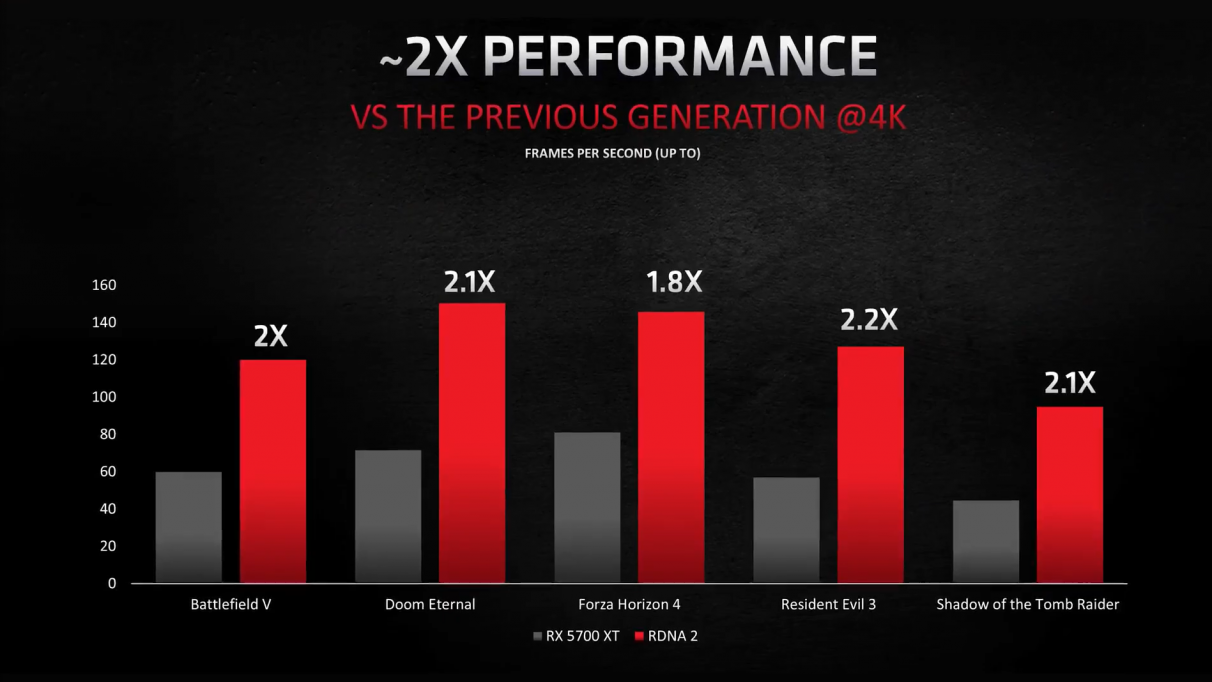 AMD didn’t stop at a single performance graph during their RDNA 2 event. Oh no. They unveiled full performance figures in a number of games for all three of their Big Navi graphics cards.

Starting with the RX 6800 XT, you can see from the bar chart below that it’s pretty much neck and neck with Nvidia’s RTX 3080 GPU despite using less power overall. It’s ahead in Battlefield V, Borderlands 3, Call Of Duty: Modern Warfare, Forza Horizon 4 and Gears 5, but either equal or marginally slower in the rest. Still, considering it costs $50 less and it uses less power, that’s really not half bad all things considered. 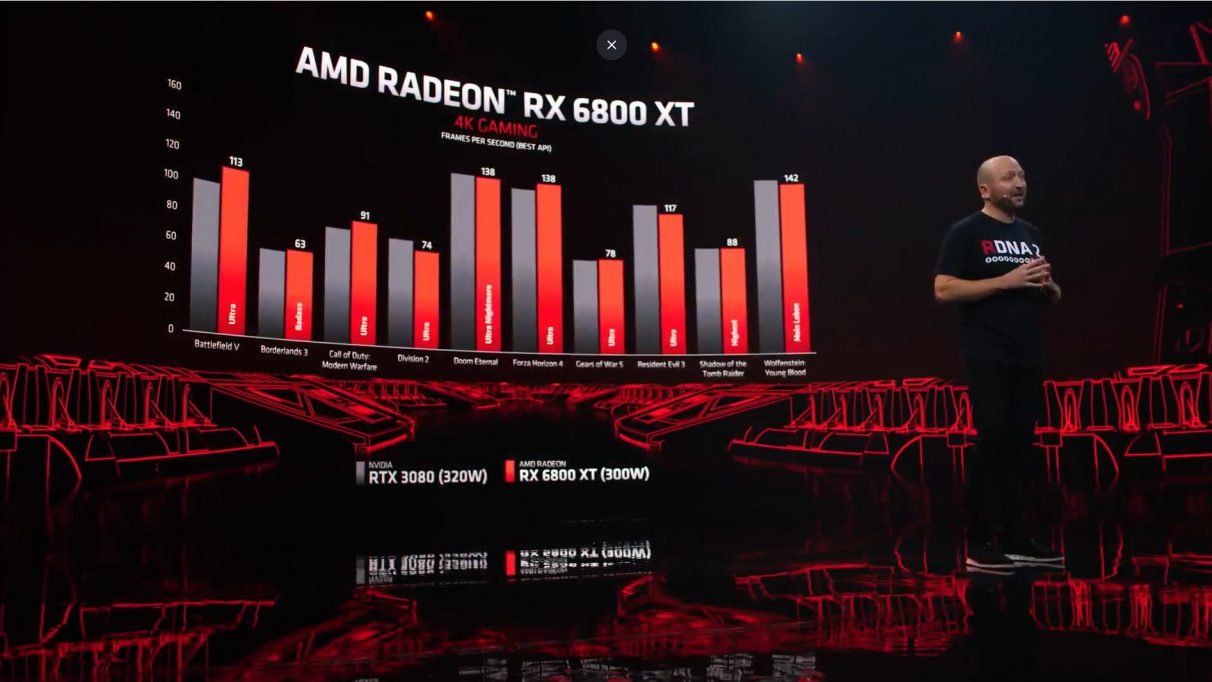 They also showed us performance figures for the same cards at 2560×1440, too, showing lots of lovely high frame rates for those with high refresh rate monitors. Again, it’s a similar spread of wins and gains here (if not slightly more for AMD at this resolution), and I’ll be very interested to see if I can replicate this performance myself once review samples are available. 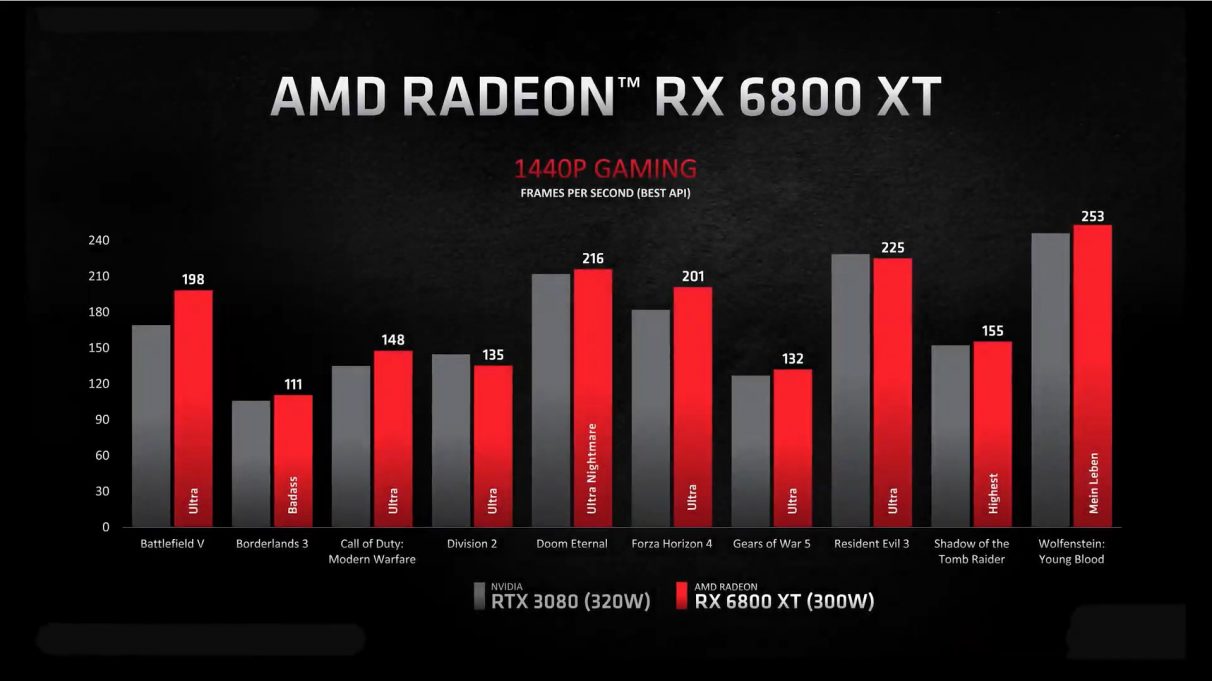 However, things get really interesting when you take into account AMD’s other rather intriguing features: their smart access memory and one-click overclocking. The former can be switched on when you pair one of AMD’s new RX 6000 Big Navi GPUs with their Ryzen 5000 CPUs, and when combined with their one-click overclocking (also known as Rage Mode), it looks like performance will increase even further, as you can see below: 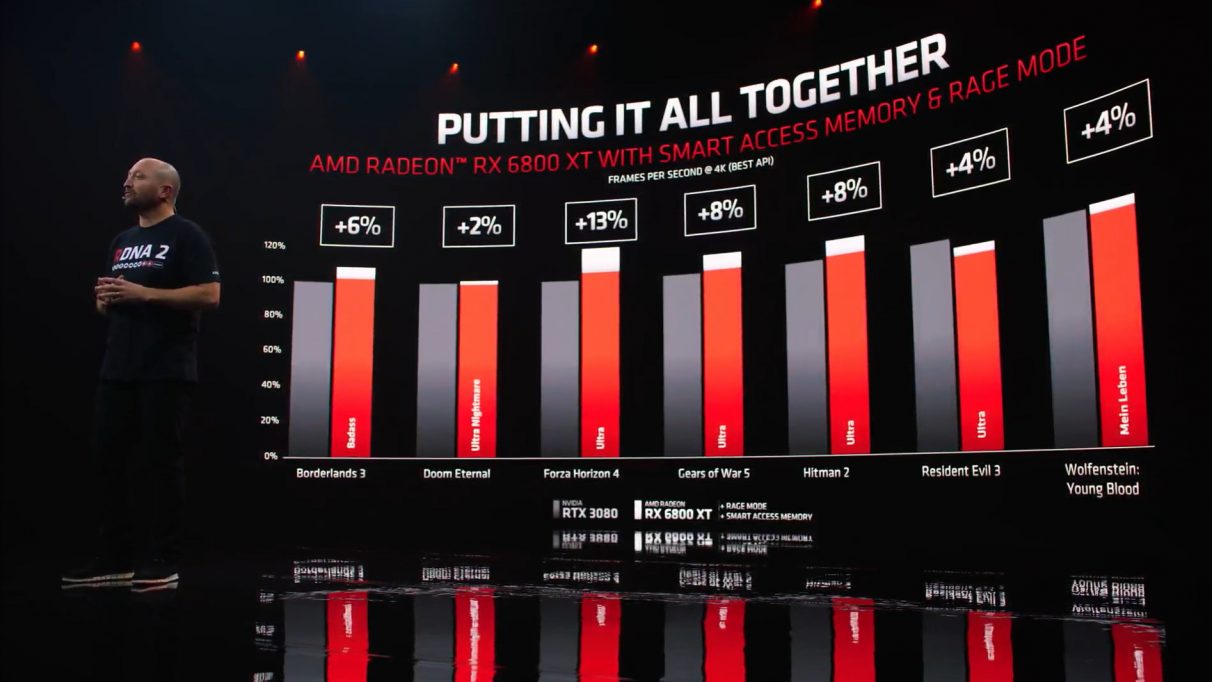 Moving on to the regular RX 6800, AMD first showed off a graph comparing its 4K performance to Nvidia’s outgoing RTX 2080 Ti – their previous flagship graphics card – before moving on to its 1440p performance. Both graphs include the gains made possible by AMD’s smart access memory feature enabled, and considering the RTX 3070 offers largely similar performance to the RTX 2080 Ti, the RX 6800 looks like it might just come out on top overall. 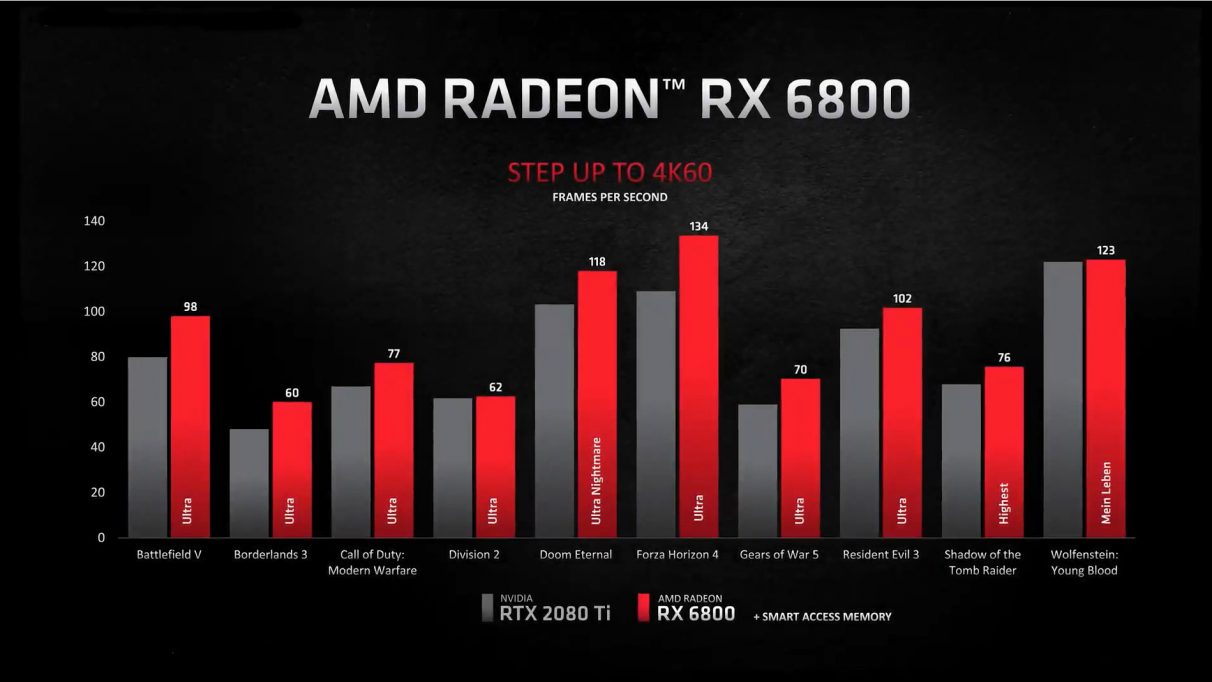 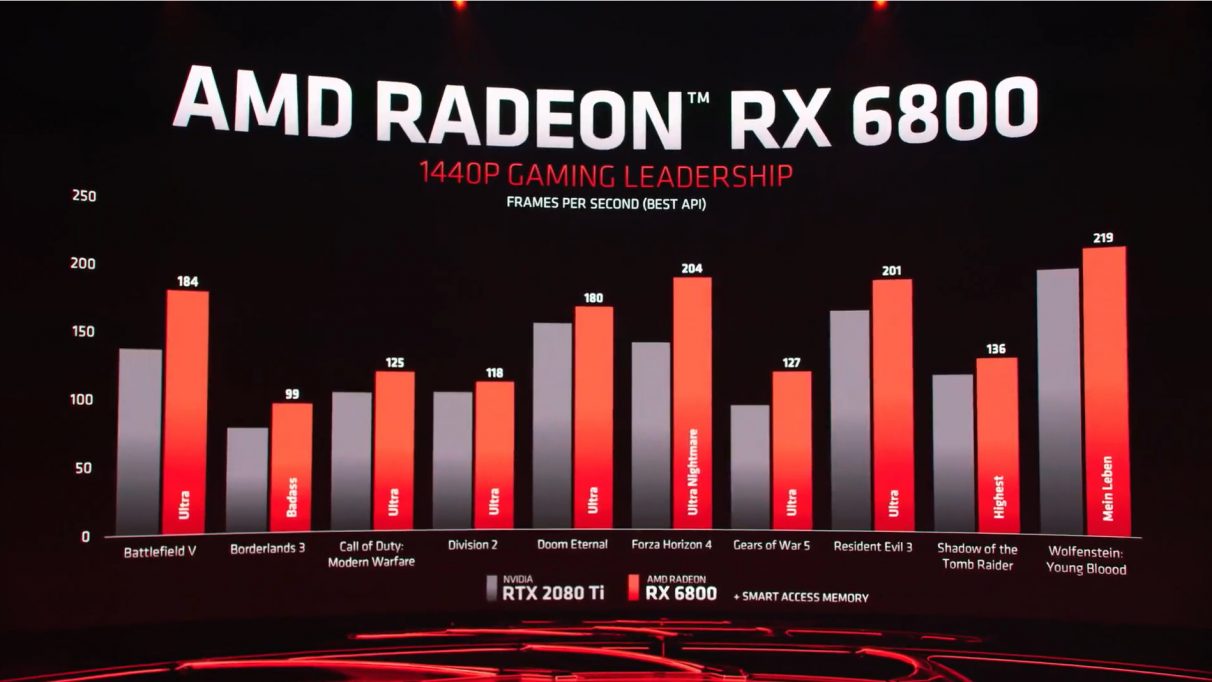 Finally, AMD rounded out their RDNA 2 event by showing off what their top of the line RX 6900 XT is capable of versus Nvidia’s RTX 3090. Again, the figures in the graph below include Rage Mode and smart access memory enabled, but if you’re looking for the ultimate in 4K performance, AMD definitely comes out on top thanks to its considerably lower price of $999 versus the RTX 3090’s $1499. 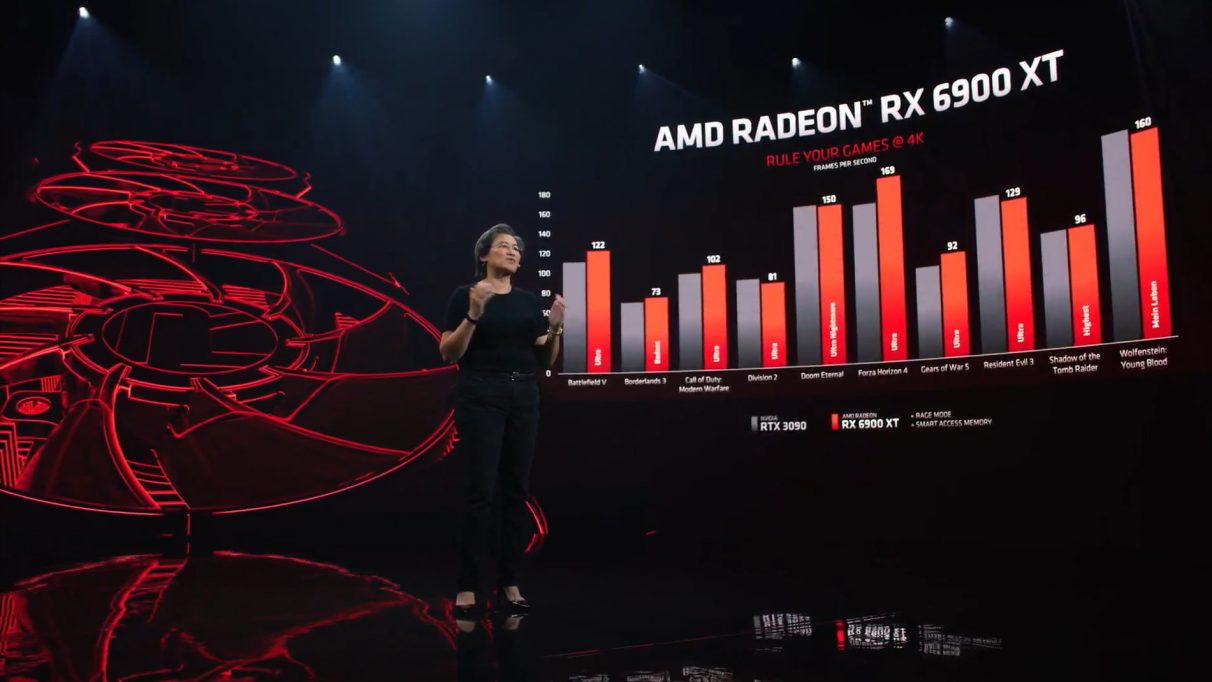