I am not usually one for horror games. I don’t like jump scares and I prefer my video games to be chill and relaxing instead of stressing me out to high heaven. To be honest, I’m still not sure why I decided to put myself through panstasz’s all-caps World Of Horror last week when the name itself would normally be a big, all-caps “Nope” for me. But it was on Game Pass, and I’ve been mildly intrigued by its 1-bit, Junji Ito-esque art style ever since I clapped eyes on it (through cracks in my fingers, natch), and with the autumn sun blazing in through my window over the weekend, I thought, “What’s the worst that could happen?” A lot, it turns out.

World Of Horror is a horror game in an adventure-style format. It’s still in early access at the moment, but even in its current state it’s incredibly well-polished. You’re a teenage detective obsessed with all manner of spooky goings-on in your home town, and there are a selection of cases you can investigate. I made it through the opening tutorial case that sees you wander through an abandoned school in search of a missing mate who’s been dabbling in occult demonic rituals, and I also just about scraped through the mystery of the creepy janitor abducting school girls to turn them into mermaids (because of course).

I met a pretty gruesome end in the next case, but the great thing about World Of Horror is that each case is randomised, so no two playthroughs are ever quite the same. It’s apt given the subject matter, as it makes it feel like you’re only just scratching the surface of some malevolent evil that’s seated deep in the veins of your hometown. There is something sinister at work here, and its ever-shifting, ever-changing nature lends itself well to its ‘World Of Horror’ moniker. 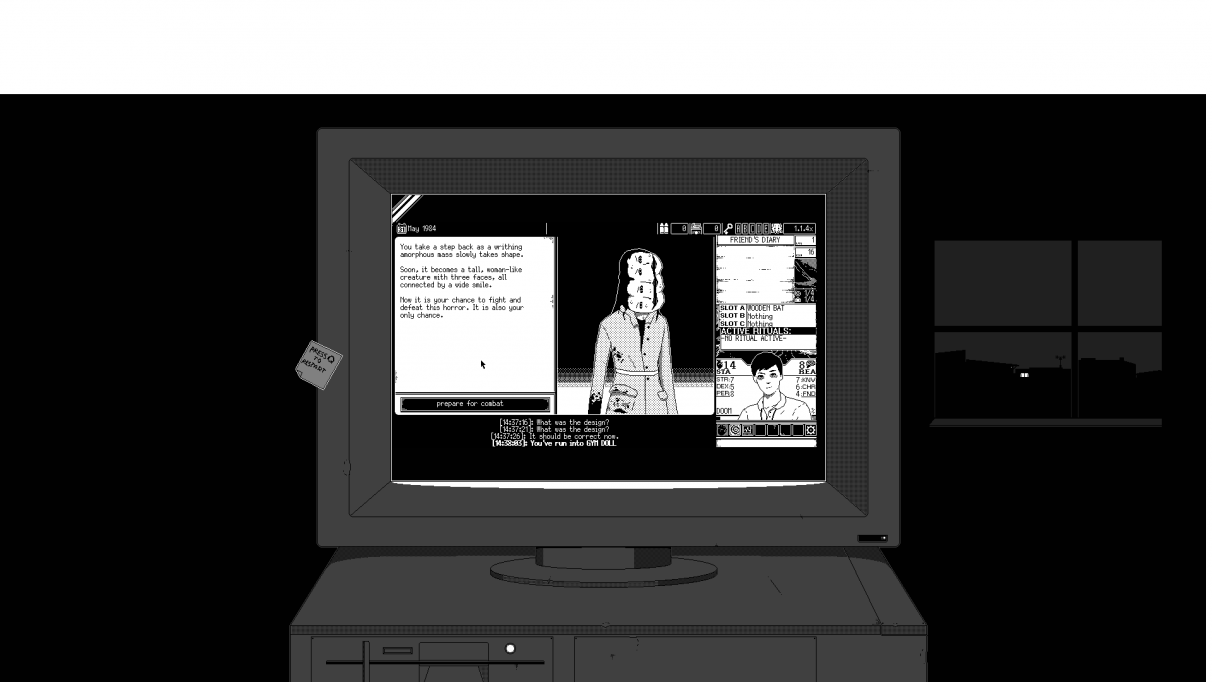 Oh good, I do love a “writhing amorphous mass”…

Whatever horrors get thrown your way, though, you can at least rely on the safety and familiarity of the way you conduct your investigations. In each case, you’ll need to visit locations in order to find clues and perhaps pick up (or buy) a few weapons and spells along the way, and you’ll need to balance your stamina and reason stats in the process. The more horrific things you encounter, the less reasonable you become, and the more your Doom meter increases, making it harder to continue your investigation and get a good outcome. But sometimes that’s a good thing, as there are multiple endings to each case, which again feeds back into this house of mirrors-type world you happen to find yourself in.

The artwork is appropriately Ito-esque, too, which is as fascinating as it is NOPE NOPE NOPE to look at, and the eerie chiptune music helps set the tone even further. I like the fact it all takes place on an old CRT monitor, too, which helps to make it feel more removed and less scary (although this, too, can be removed and customised so you’ve got all those eldritch horrors writ large on your own monitor screen if you prefer).

You can give it a go on Steam if you fancy a good spook this week, but I’d probably recommend playing it on Game Pass if you have that instead, if only so you feel less bad about NOPE-ING out of it like I did when it got a bit too much.

Tagged with feature, Have You Played, panstasz, Ysbryd Games, World of Horror.

More about World of Horror

World of Horror is some neat Junji Ito-inspired horror

The digital urban legends of Junji Ito, and the games they've inspired