I’ve always been sceptical about the need for high-powered processors like AMD’s Ryzen 9s and Intel’s Core i9s in ordinary gaming PCs. It’s all very well if you use your PC for work editing videos, animating 3D models or running virtual machines and the like, as the extra processing power afforded by their considerable number of cores and threads is no doubt exceedingly useful in these sorts of cases. But if all you want is a fast CPU for gaming, they’ve rarely been better value than their cheaper Ryzen 7 / Core i7 counterparts.

It was certainly the case with AMD’s Ryzen 9 3900X, which, while fast, wasn’t really that much nippier gaming-wise than the Ryzen 7 3700X. I suspect it will probably be the case for the Ryzen 9 5900X, too, as while I haven’t yet been able to test the Ryzen 7 entry in AMD’s new Ryzen 5000 family just yet (although a review is coming), the performance gains the 5900X offers over the stonkingly good Ryzen 5 5600X are also quite minimal. Certainly not enough to convince me to spend another £300 / $250-odd on it in any case. However, if you are in the market for the bestest best gaming CPU money can buy right now and you only care about having the fastest possible processor, then the Ryzen 9 5900X is definitely the one to go for, as it trounces Intel’s Core i9-10900K in almost every test going.

The Ryzen 9 5900X offers better performance than its Intel Core i9-10900K rival, both when it comes to gaming and regular desktop performance, but in terms of overall value, it’s nowhere near as good a buy as the Ryzen 5 5600X for gaming.

In my eyes, though, the Ryzen 9 5900X’s faster overall performance and lower TDP of 105W compared to the Core i9-10900K’s 125W make it the better processor overall. Its 12 cores and 24 threads may only reach a maximum clock speed of 4.8GHz as opposed to the 5.3GHz speeds you’ll see on its Intel rival, but as you’ll soon see below, the benchmark numbers speak for themselves.

Of course, as I’ve mentioned in previous CPU reviews, assessing a processor’s gaming performance is still quite challenging compared to other component tests I do, as most built-in gaming benchmarks don’t accurately reflect what your CPU’s actually doing. Benchmarks are getting better in this respect, with the likes of Shadow Of The Tomb Raider, Forza Horizon 4, Assassin’s Creed Odyssey and the Total War series all providing a proper, in-depth look at your CPU’s performance as well as your graphics card, but there’s still more that can be done. 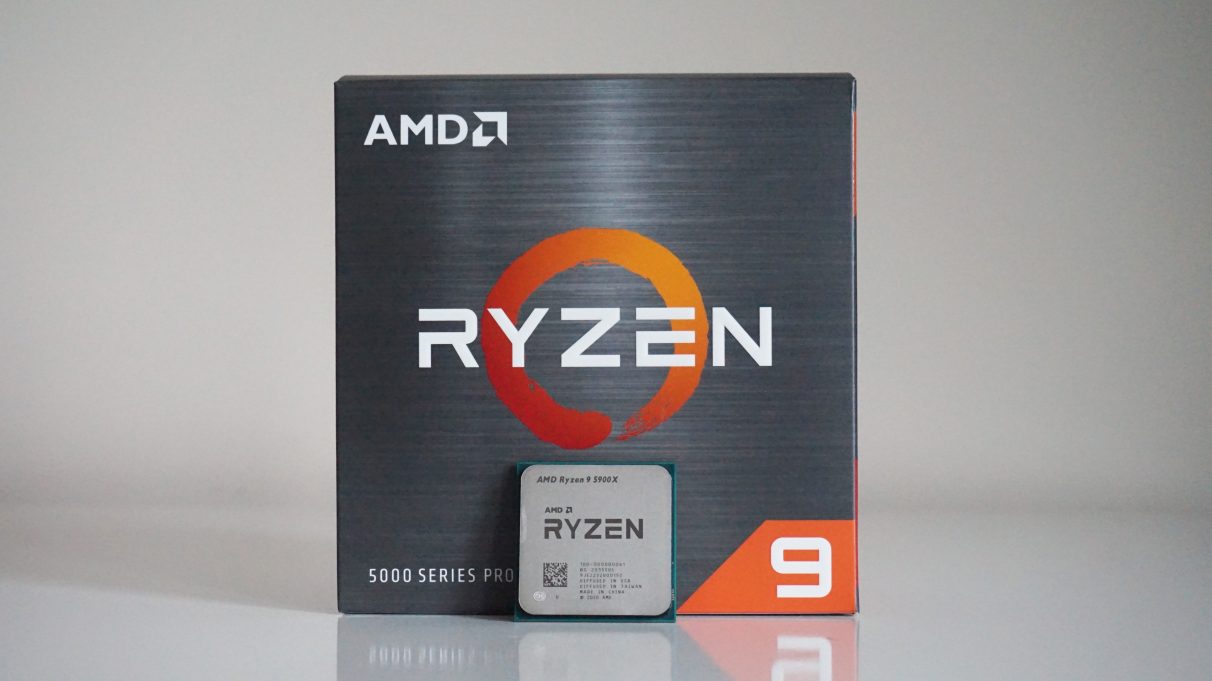 The Ryzen 9 5900X doesn’t come with a cooler in the box, so you’ll need to supply your own.

There are several other factors that can affect your CPU’s gaming performance, too. These include your graphics card, the type of RAM you’ve got installed, and even the kind of storage you use to install your games on. As a result, getting a truly accurate picture of your CPU’s performance is still fraught with difficulty, but I’ve done the best with the equipment available to me.

As per my other recent CPU reviews, I’ve used Nvidia’s GeForce RTX 2080 Ti as my graphics card of choice here, and 16GB of Corsair’s Vengeance RGB Pro RAM, both at its default speed of 2133MHz to keep things in line with other historic results and at its top speed of 4000MHz to see how much more you can get out of it. As I mentioned in my Ryzen 5 5600X review, I’m using a slightly different motherboard to previous AMD tests: Asus’ ROG Crosshair VIII Hero, rather than Gigabyte’s X570 Aorus Master. However, as you’ll see in my Asus ROG Crosshair VIII Hero review, there’s really not that much difference between them in terms of overall performance. A frame or two here and there, perhaps, but nothing more. 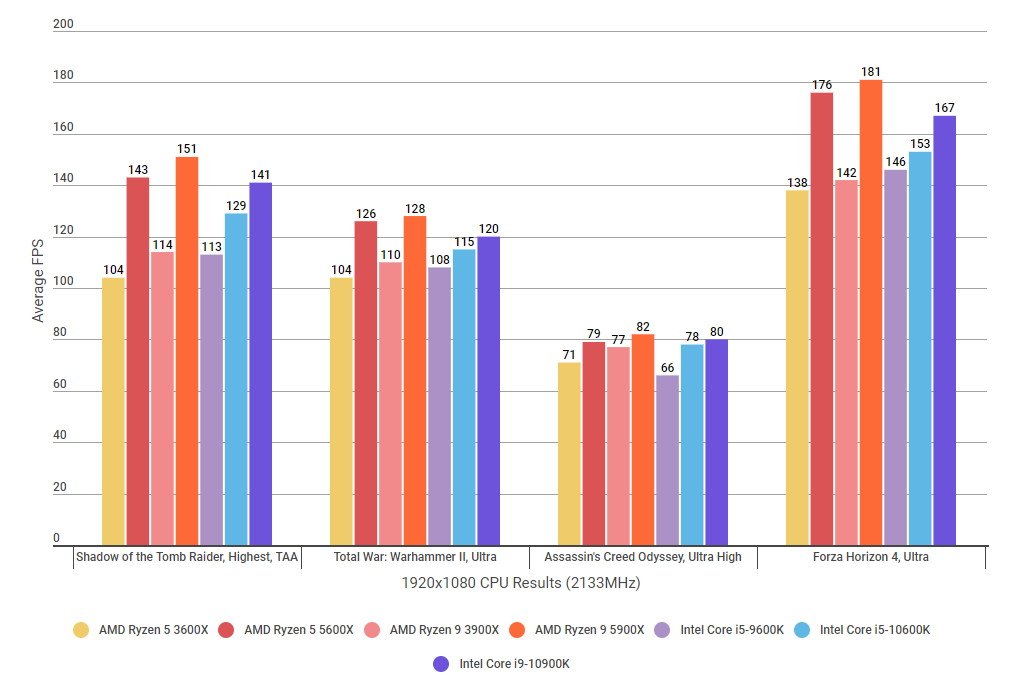 That gap gets a lot tighter when you move up to 2560×1440 resolutions, but in most cases the Ryzen 9 5900X still comes out on top, albeit only by a couple of frames here and there. At 4K, however, both processors came out with nigh-on identical results, as you’re still GPU bound at this resolution, even with an RTX 2080 Ti. As a result, the only resolution where you might actually see any tangible difference between the two processors’ gaming performance is 1080p. 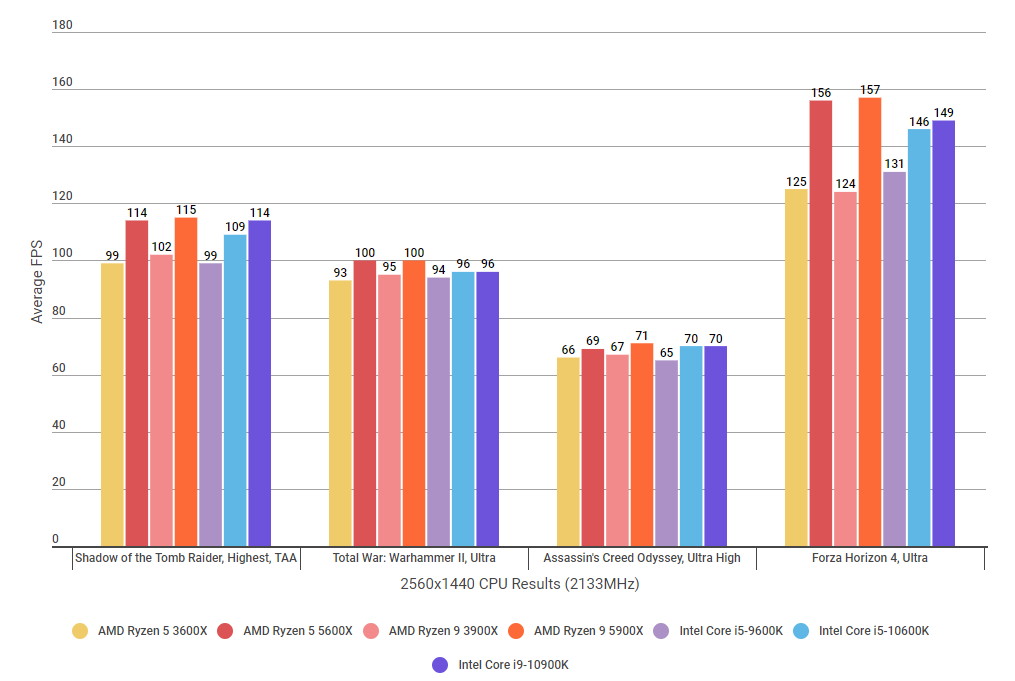 When I bumped up my RAM speed to 4000MHz using its built-in XMP profile, it was much more neck-and-neck, even at 1080p. As you can see in the graphs below, AMD comes out on top in Shadow Of The Tomb Raider and Forza Horizon 4, but Intel has the edge in Total War and Assassin’s Creed Odyssey. 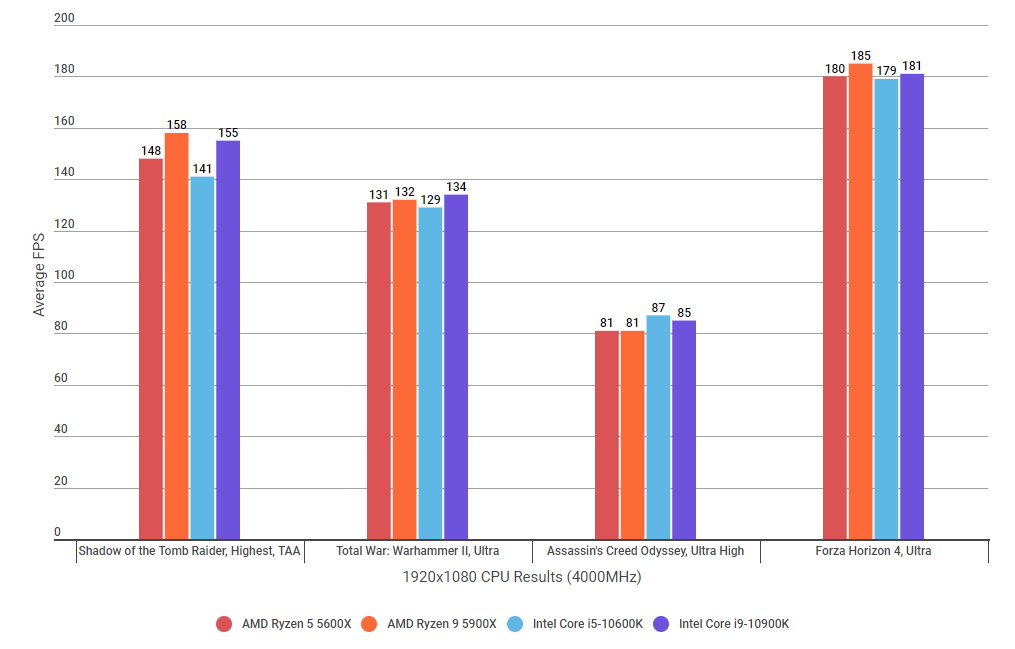 Still, given AMD’s lower TDP, I’d still count this as a win for AMD, if only just. If I had to pick one to go inside my PC, I’d pick the one that ran cooler and guzzled less power any day of the week, especially when its daily desktop speeds are so much faster as well. When I put the Ryzen 9 5900X through Cinebench’s R20 benchmark, for example, it returned a blazingly fast single core score of 630, and an equally quick multi-core score of 8312. 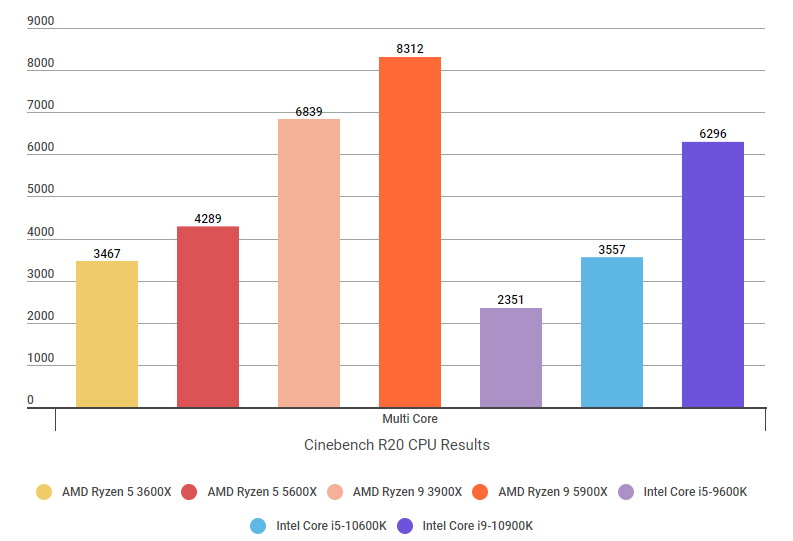 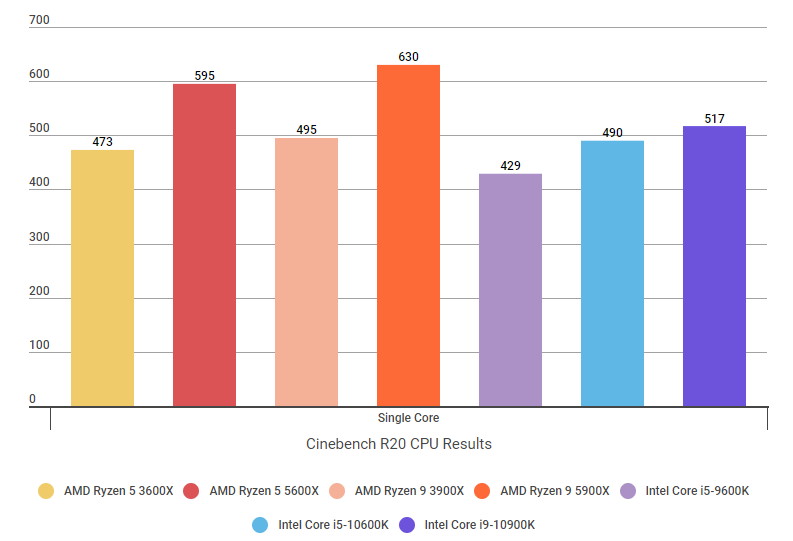 However, as you can also see from the graphs, the real winner here isn’t the Ryzen 9 5900X or the Intel Core i9-10900K. It’s the Ryzen 5 5600X, whose stonkingly fast gaming speeds show there’s really no need to spend the big bucks on a high-powered processor if all you’re after is a damn fine gaming CPU. Yes, the Ryzen 9 5900X is the better choice for high-end professional media types who use their PCs for demanding work applications that run dozens of tasks simultaneously, but when it comes to gaming, the Ryzen 5 5600X is much better value.

Indeed, I’ll be interested to see where the Ryzen 7 5800X fits in when review samples finally arrive (early samples were limited to the 5600X and 5900X), but given how close the 5600X is to the 5900X already in my gaming benchmark results, I suspect the Ryzen 7 will struggle to make its mark in the same way its 3700X predecessor. Instead, the Ryzen 5 5600X looks like it’s going to be the best gaming CPU in AMD’s new Ryzen 5000 family, and you should only really consider getting the Ryzen 9 5900X if you really need that extra multi-tasking performance for professional work tasks. Otherwise, you’ll be much better served with the Ryzen 5 5600X.