There are two, pretty obvious, factors by which I judge strategy games: how immediately satisfying they are to play, and how well that satisfaction holds up in the long run. Success in the first respect is often a trade-off for success in the second, as the things that dazzle on day one become dulled by the cumulative effect of small design problems. It’s hard, then, to take the measure of a big ol’ strategy game during a limited preview play session.

But after just a day with it, I have high hopes that Empire Of Sin, the extraordinary prohibition gangster simulation coming from Romero Games on December 1, is going to hit the big time on both fronts.

The key phrase here is “just a day”. It’s not too often I’ll want to keep playing a game for more than two or three hours in one sitting. I got six hours with this one, and I was genuinely aggravated that I had to relinquish control of my burgeoning crime project. It had its hooks well and truly into me. I suspected I would enjoy Empire Of Sin when it was announced, and I’ve followed development closely, so I knew what to expect. But when I actually got to grips with this seedy, saxophones-and-grubby-velvet Chicago-’em-up, I was surprised by how far it exceeded my expectations. Empire Of Sin is greater than the sum of its parts, and all the parts are pretty great.

What you’ve got here, is your classic game of four halves.

What you’ve got here, is your classic game of four halves. Empire Of Sin is a stats-based management game, about running the speakeasies, breweries, brothels and casinos of your chosen mob. It’s a turn-based squad tactics game, where you fight to take premises off other gangs, or for any one of a dozen other reasons. It’s an RPG, where you lead your growing bunch of naughties around the city streets, pursuing various story quests, and tooling them up with new weapons, equipment and skills. And of course, it’s a gang-based grand strategy game about taking over a city, where its heritage as a Paradox publication becomes immediately recognisable in diplomacy, warfare and so on.

And there’s more. It veers into being a close-up narrative game during boss-on-boss sitdowns, into citybuilding territory with its building upgrades, and even into the realm of Crusader Kings with its dozens of recruitable gangsters, all of whom have grudges, affections, ambitions and personalities. 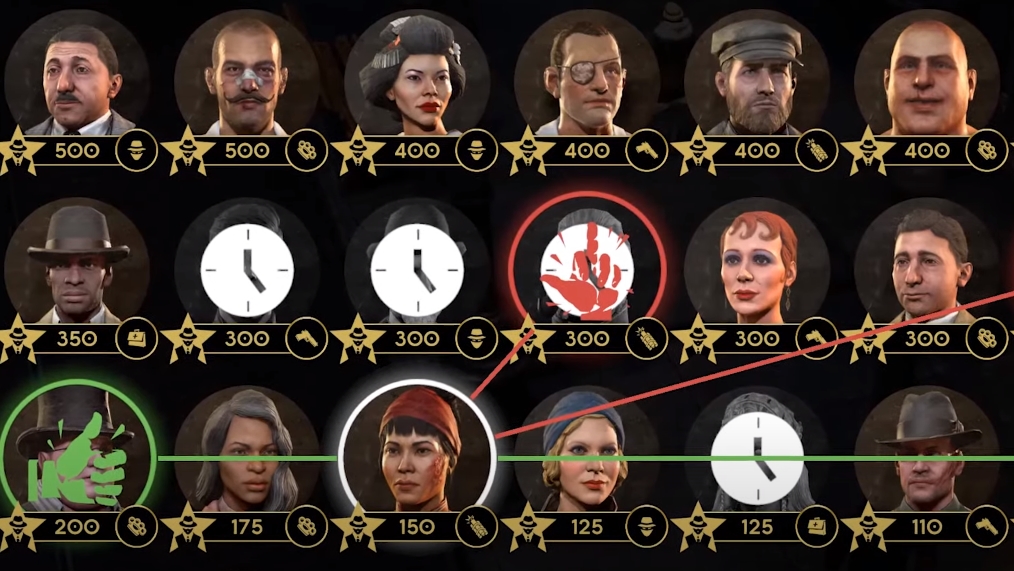 It’s a lot, is what I’m saying. But none of its strands feels like a minigame, or a darling lingering long after it should have been killed. Each of them is fleshed out to the extent where I couldn’t name any one as the “main” component of the game. In X-COM, for example, there’s a clear distinction between the big-picture Geoscape segments, and the episodic bouts of squad fighting on the ground, which are the clear soul of the game.

In Empire Of Sin, it’s harder to separate the pieces. For a start, they blur visually into each other. The bustling, honk-honk streets of Chicago zoom out smoothly into a whited out, board game abstraction of a map, with buildings colour coded by gang ownership, and little icons showing where your various spivs and bruisers are lurking. You might send your boss and some goons into a venue, Baldur’s Gate style, only to have the camera swoop into a zoom to show blokes scampering about with guns once things kick off inside. The sitdowns may take place in moody gangster movie close-up, but they occur in the very interiors you’ve upgraded and populated with saxophonists during management. Later, they might be where you accomplish the pivotal braining of a rival sociopath. 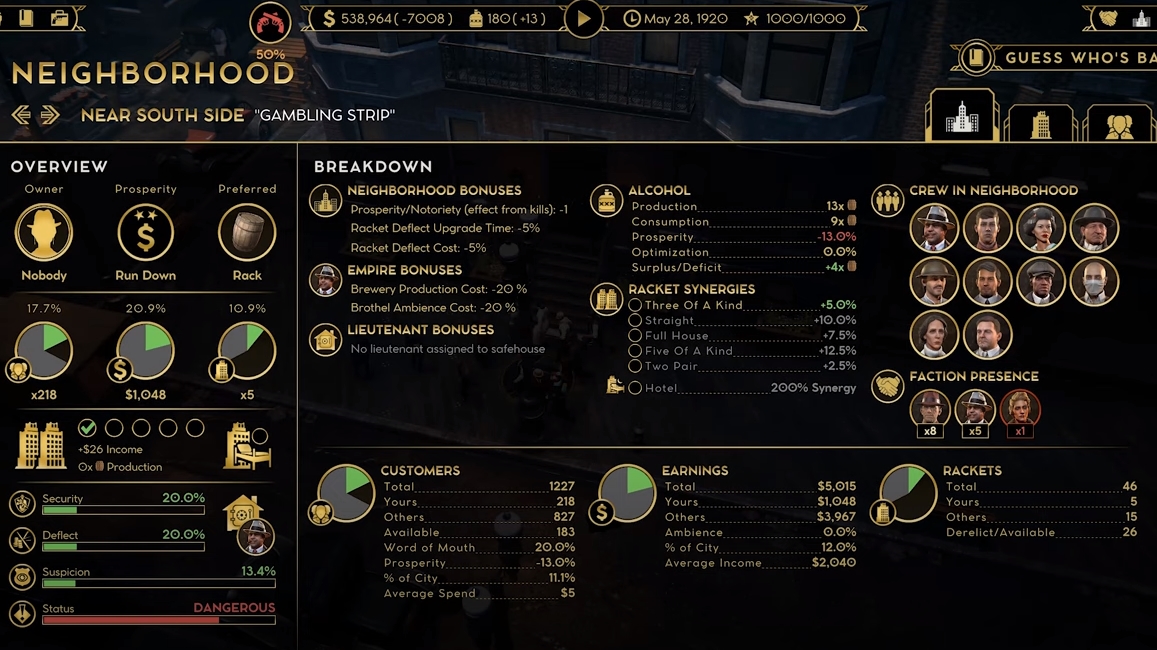 And that’s where the real magic is here. Because each of Empire’s primary strands affects the play of all the others, via a dizzying level of integration. Your management game lives or dies by how you perform in combat, since while you can buy buildings (like a chump), it’s generally far more efficient to pay for them in human blood. Similarly, your performance as a gang dictates your equipment budget, who you’re able to recruit, and so on. How you follow your mob boss’s personal story will have an effect on who they are, where you fight, and how you relate to your gang, while… crikey. Just trying to think about how to summarise how all the various interactions between things is making me faintly anxious, so please just take my word for it.

If I’m honest, I think I like the management game best, because I’m a nerd. It’s essentially about brewing secret booze and running secret pubs, and I am inherently satisfied by games about supply and demand. As I’ve said, everything else feeds into it; the effect of the cops on your business, let’s say, will depend on how you’ve chosen to handle them in other strands, while virtually every parameter of your operation will be affected, in classic Paradox style, by huge numbers of tiny nerfs and buffs imposed by decisions made elsewhere. But even without all of this stuff reaching in from the rest of the game, I think I’d enjoy it on its own merits. Definitely something I’d pay a tenner for on steam, at least. 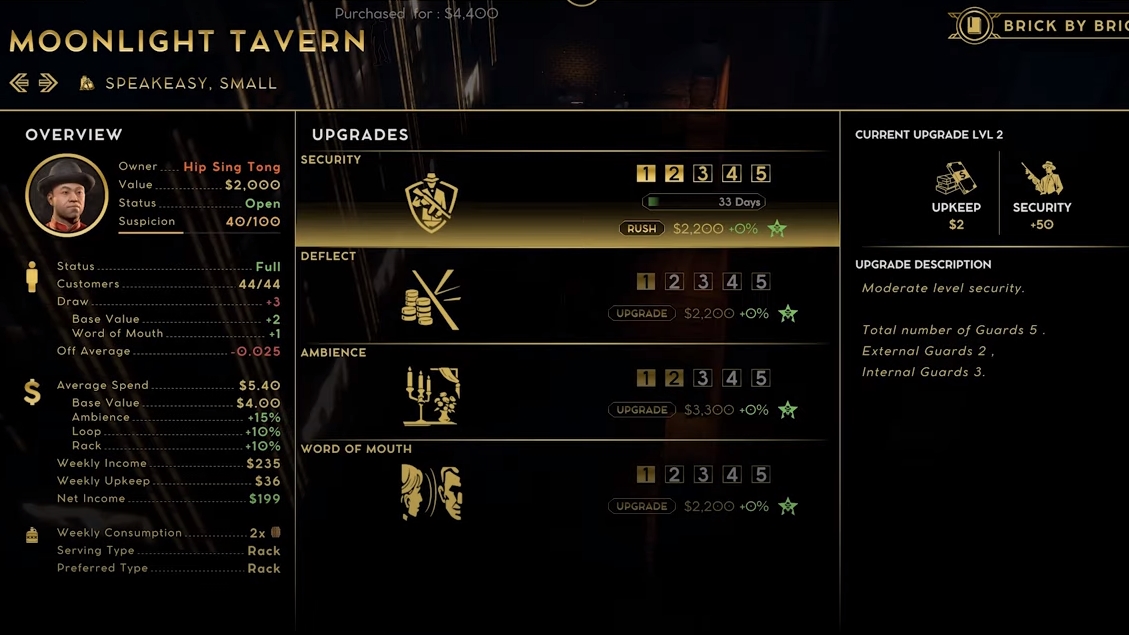 I had a lot of fun renaming premises to things like “absolutely no beer” or “couldn’t be a pub”.

If I’m lukewarm on anything, it’d be the combat game. There’s nothing bad about it, and indeed many elements are really good: each boss, for example, has one ludicrously powerful special ability that defines the way fights play out. My boss, Maggie Dyer, was a really hard circus lady who could drag enemies towards her with a whip. Beyond the actual tactics, there’s some brilliantly rowdy fight jazz that plays in battle, and the battlefields – both exterior and interior – are awash with the slightly larger than life, mega-moody period charm of the game at large.

Generally, though, the turn-based fighting is played by the book. It doesn’t feel generic, but it doesn’t feel particularly innovative either. Like the management strand, it would probably work perfectly well as a game in its own right, but probably not one I’d bother buying this time.

Going back to where I started this post, however, there’s a note of caution here. The more moving parts a machine has, the more things can go wrong with it over time, as little parts wear out and stop bigger parts from working. Having chatted at length with the developers, I’m reassured by the sheer quantity of playtesting and balance fine-tuning that has gone into Empire Of Sin. But even so, what they’ve done here is stitch together a load of games from different genres into one playable whole. Over six hours, as I said, it was a seamless effort. But I just don’t know how it will all hold up to extended play. 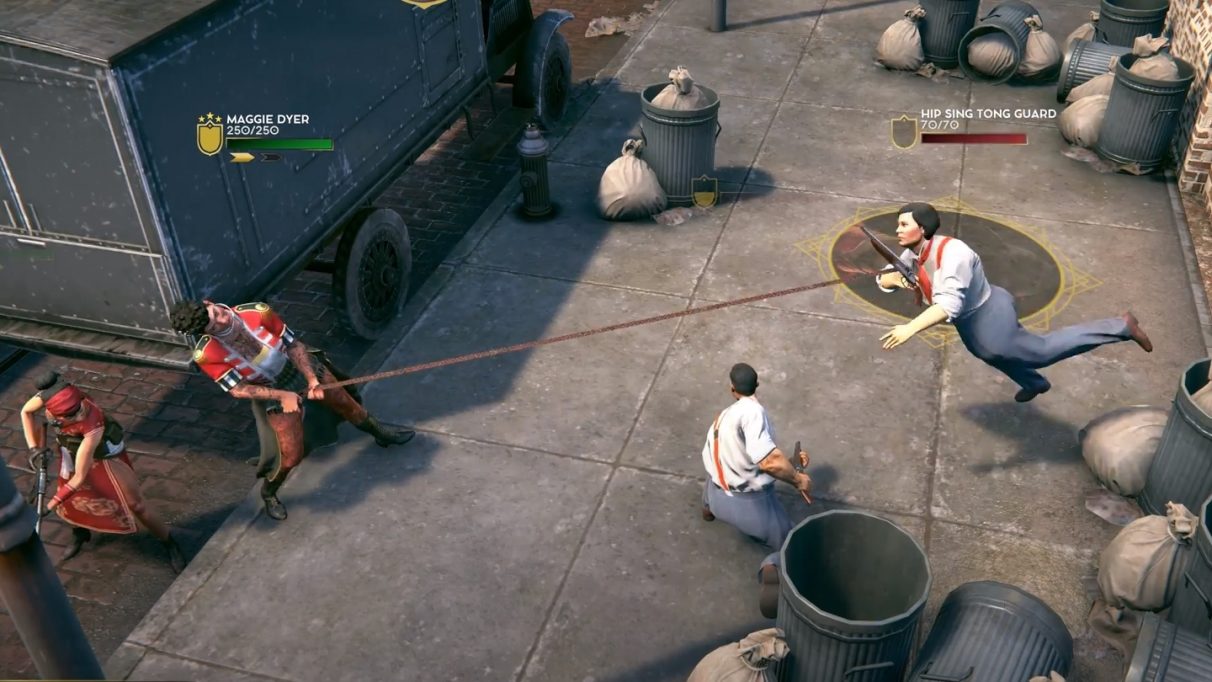 That doesn’t mean I’m dubious, it just means I have no idea. There were whole game systems I was still discovering at the end of my session, and I was far from developing an instinct for even the ones I fully understood. I have a good deal of faith, however, that if Empire Of Sin has been made to function at all then it has every chance of lasting the distance. And for all that’s said about post-launch patching, this seems an extremely reasonable case for the application of small tweaks over a long time, as unforeseen interactions crop up for regular players.

Presuming it does all hold up, I think this game really is a bit special. Prohibition-era Chicago is such a phenomenal setting, and it’s one that I’m surprised hasn’t been used more over the years, given its mythic significance. A strategy game, a management game, a squad battler or an RPG taking place in Capone’s town would all have been great prospects. To get all four at once is a real feast.