There are three headsets in Roccat’s new Elo family. At the bottom, there’s the entry-level Elo X Stereo, a simple, lightweight stereo gaming headset that costs just £40 / $50. Then there’s the £60 / $70 Elo 7.1 USB, which, as its name implies, adds a USB connection and 7.1 surround sound to the mix, as well as Roccat’s Aimo RGB lighting and extra sidetone settings. Finally, there’s the wireless Elo 7.1 Air, which pretty much does everything the Elo 7.1 USB offers without the wires for £90 / $90.

Crucially, they all share the same ultra comfy design, which mimics the ski-goggle-style design of my favourite Steelseries Arctis 7 and Logitech G733 Wireless headsets for hours and hours of headpinch-free gaming. It makes the Elo X Stereo a particularly great headset for those on a budget, but is it worth spending that little bit extra on the Elo 7.1 USB? I’ve put both headsets head to head to find out.

Taking the cheaper Elo X Stereo as my starting point, I was surprised by just how comfortable it was to wear for long periods of time. The headband still looks pretty chunky and heavy compared to the literal strips of fabric you get on the Arctis 7 and G733 Wireless, but in practice I wasn’t able to tell the difference. It felt completely weightless when I was playing games with it, and I was able to wear it for hours and hours without even the slightest hint of discomfort.

The Roccat Elo X Stereo is a fantastic gaming headset that takes the best bits of its more expensive siblings and wraps them up in a budget-friendly package. It has great sound, a comfy, lightweight headband and a brilliant mic, and it’s much better value than the Elo 7.1 USB headset.

Strangely, there isn’t actually any manual adjustment on the Elo family. Instead, Roccat say their design offers a ‘dynamic fit’ that ‘self-adjusts’ when you put it on. This is true to an extent. The headband will stretch and mould itself to your head when you put it over your ears, and the ear cups can be rotated side to side. As someone with an apparently smaller head than most, I was able to get a pretty decent fit overall, but if I was being picky I’d say it felt a touch too big for my liking. This didn’t stop it from being a supremely comfortable headset, though, and those with larger heads probably won’t have a problem with it. However, I would have liked to see a teensy bit more adjustment in the top metal headband, for example, so the plush, memory-foam ear cushions didn’t cling to the edge of my jaw so much.

Still, the Elo’s design still gets a thumbs up from me, as my main quibble with a lot of headsets is that they often make my head hurt after 30 minutes or so. This wasn’t the case with either Elo headset, though, and I’d even go as far as saying the Elo X Stereo is even more comfortable to wear than my current budget headset recommendation, the Logitech G432.

The Roccat Elo X Stereo has an onboard volume wheel and a microphone mute button that beeps when you switch it on and off.

The Elo X Stereo’s sound quality is pretty great, too, particularly if you like your headsets to be on the bassy side. It comes with a combined 3.5mm headphone and microphone jack for controllers, laptops and phones as standard, but you’ll also find a longer dual 3.5mm adapter in the box so you can plug it into your PC.

In Doom, my Super Shotgun had plenty of weight and heft as I pumped imps and demons full of lead, and its pumping industrial soundtrack felt heavy and immersive in busy battle arenas. A touch muddy in places, perhaps, but forgivable given the price. In any case, I was still able to hear the drip and squelch of crushed demon bones against the rush of other effects against the background music, and I was also able to pinpoint where every noise was coming from to help pick off any wayward stragglers.

The Roccat Elo 7.1 USB headset adds a sidetone control to the headset, but it’s very easy to confuse it with the volume wheel.

The binaural soundtrack of Hellblade: Senua’s Sacrifice sounded excellent on the Elo X Stereo as well. The voices in Senua’s head sounded natural and warm as they swirled and tittered around my head, and they felt well-balanced against the game’s more subtle sound effects such as the gentle drip of Senua’s oar and the ominous rolls of thunder in the distance.

Similarly, Final Fantasy XV’s orchestral score had plenty of warm detail present, and there was a great sense of balance between the highs of the strings and the lows of the bass section. Nothing sounded too tinny or thin on the Elo X Stereo, and every instrument felt like it was getting its due. The soundtrack didn’t suffer when Noctis and his pals went into battle, either, with the zippy-zappy sound effects of Noctis’ teleportation attacks feeling well-balanced against the game’s urgent and immersive battle themes.

In short, the Elo X Stereo is a fine gaming headset when it comes to sound quality, and I wouldn’t say the more expensive Elo 7.1 USB really improved things much in this regard. Doom was a smidge more detailed, bringing more clarity to the ever so slightly muddy areas I mentioned earlier, but Hellblade and Final Fantasy XV sounded more or less exactly the same on both headsets, offering just as much warmth and breadth as the other. 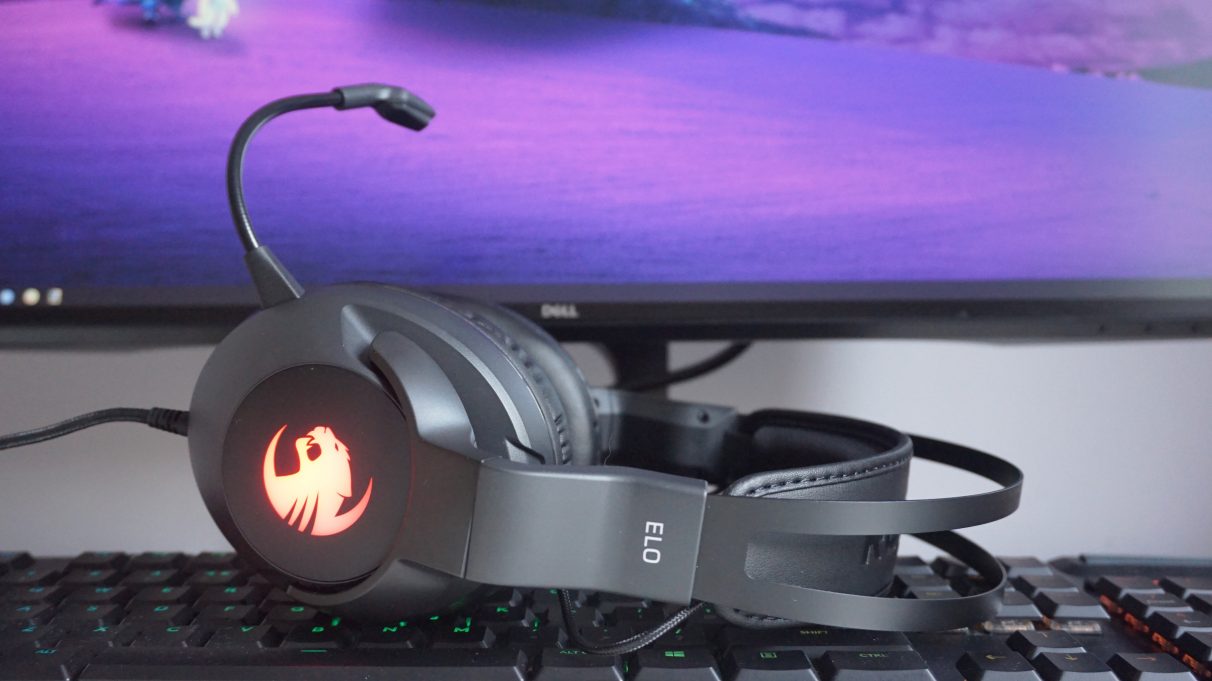 The Roccat Elo 7.1 USB adds in RGB lighting on the ear cup, but otherwise its design is exactly the same as the Elo X Stereo.

I couldn’t even tell much difference between the two headset’s detachable microphones, either. Both produced an equally clear sound without any trace of background hiss, and both suffered from the occasional blowy plosive effect. Overall, though, each one put in a pretty great performance, especially compared to other budget headset microphones I’ve tested in the past.

As mentioned above, the only real advantages the Elo 7.1 USB brings to the table is its adjustable sidetone settings, which you can change on the headset itself thanks to its onboard slider if you don’t want to faff around with Roccat’s Swarm software, and some extra customisable equaliser settings if you want to finetune the sound of the headset even further.

The latter will require you to download Swarm (you’ll also need it to turn off or change the headset’s RGB lighting as well), but for the most part it’s pretty easy to use. Personally, I found the default equaliser preset to be the best one of the lot, but you also have a choice of several game genre-specific presets, such as MMO, RPG and Action (not that I could really tell the difference between them) as well as the incredibly niche Instrument and Explosions (yes, really) should you wish to experiment. 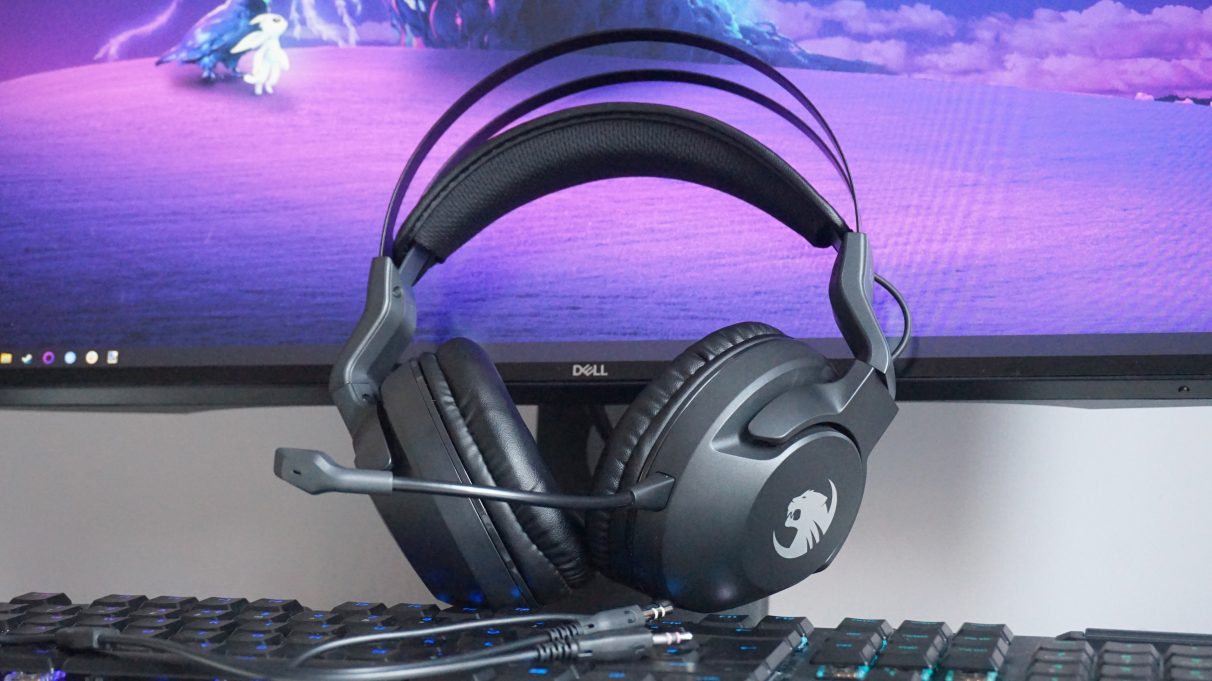 Roccat’s Elo X Stereo may be plain, but it’s hands down one of the comfiest budget gaming headsets I’ve ever tested.

I must admit, I did miss the 7.1 USB’s sidetone settings when I switched back to the Elo X Stereo, but not enough to warrant spending an extra £20 / $20 to get it. In my eyes, the Roccat Elo X Stereo offers more than enough for those after a brilliant gaming headset on a budget, and it also offers a lot more versatility when it comes to plugging it into other devices and consoles, too.

Overall, unless you want to ditch the wires entirely and pay top dollar for the wireless Elo 7.1 Air, the Elo X Stereo is much better value than its USB sibling, and my new favourite budget gaming headset next to the Logitech G432.