I didn’t think Umurangi Generation could find a way to be more entirely my jam. And yet, with a heaping serving of skates, spraypaint and giant killer robots, today’s Macro DLC has managed just that. But alongside a new set of maps, lenses, and a toolset that closes the gap with Jet Set Radio even further, this week’s drop is also brazenly radical in capturing our current political hellscape on 35mm film.

Macro adds four new levels to Umurangi Generation’s alternative Aotearoa – from a VR nightclub DJ’d by a cyborg dolphin to the rat queen’s underground rave city, by way of an honest-to-god mech hangar. Like the game’s existing levels, they’re dense photography puzzleboxes filled with human dioramas to capture on film. Now, you’ve got even more tools to do so. 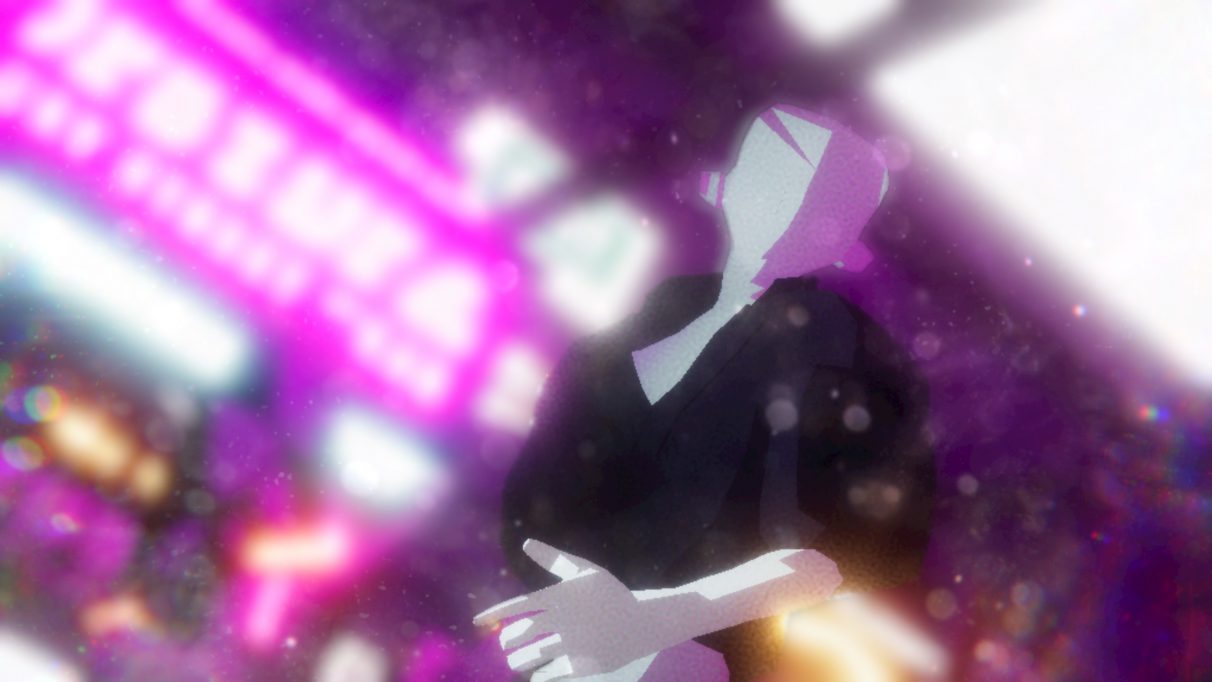 A bunch of new attachments have been added to help you snap more stylish pics. Shutter speeds, apertures and ISO can now be adjusted more precisely, while a range of new lenses broaden the scope of what you can snap. Being the absolute child I am, the selfie cam is a particular fave (if a little janky), though there’s also a Gameboy Camera-style attachment if you need smaller palettes and larger pixels.

But Macro also adds two new goodies pulled straight outta Jet Set Radio. The first, a pair of skates, act as a glorified sprint button (albeit an incredibly stylish one). The second, however, is a spray can that lets you paint across the map. It’s a little limited, mind – many surfaces aren’t paintable, unfortunately, and there are sparse few spots where you can really get creative with it. But it’s a welcome addition nonetheless, one that let me brand an Eva Unit with the RPS seal of approval. 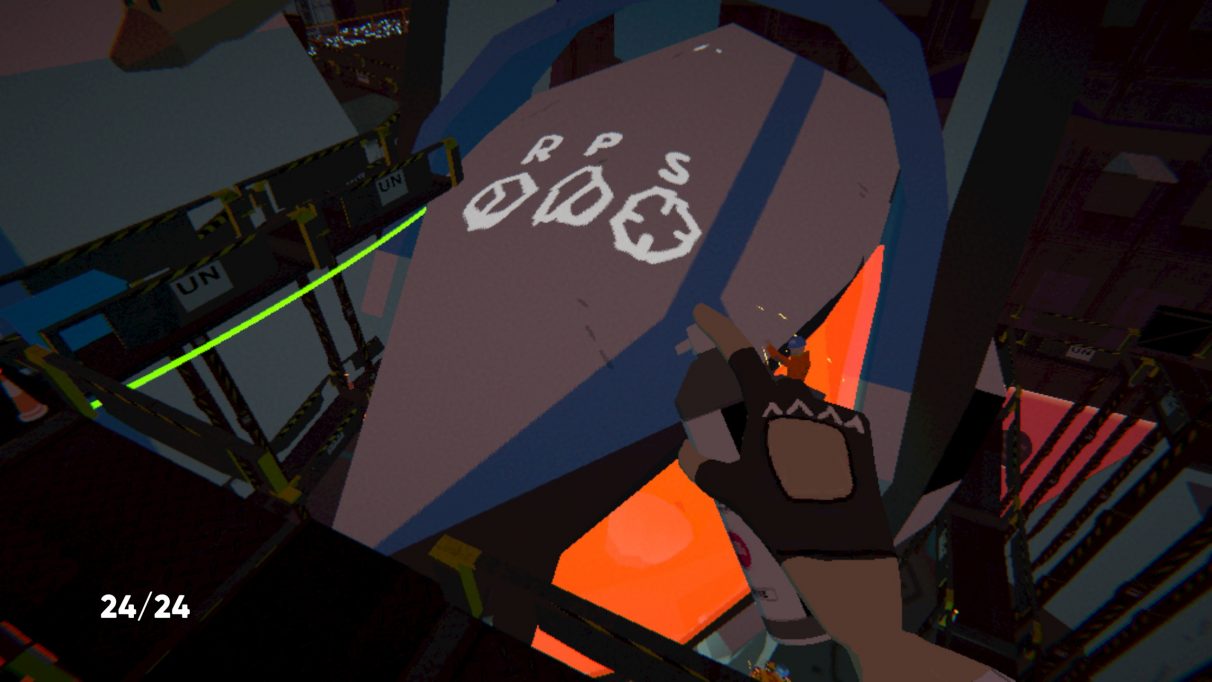 How many other games outlets can say they have their own Gundam?

Were it just giant robots and graffiti, that could’ve been enough. But Macro is brazenly radical is a way I wasn’t prepared for. Veselekov’s photo romp has never been shy about its views, with the base Umurangi Generation game deeply concerned with its Māori roots, colonialism, and the radical act of creating art at the end of the world. It would be reductive, I reckon, to say that the game has only now become “political” because its battles have become more recognisable to me as a western writer.

And yet, Macro still manages to go for the goddamn throat. 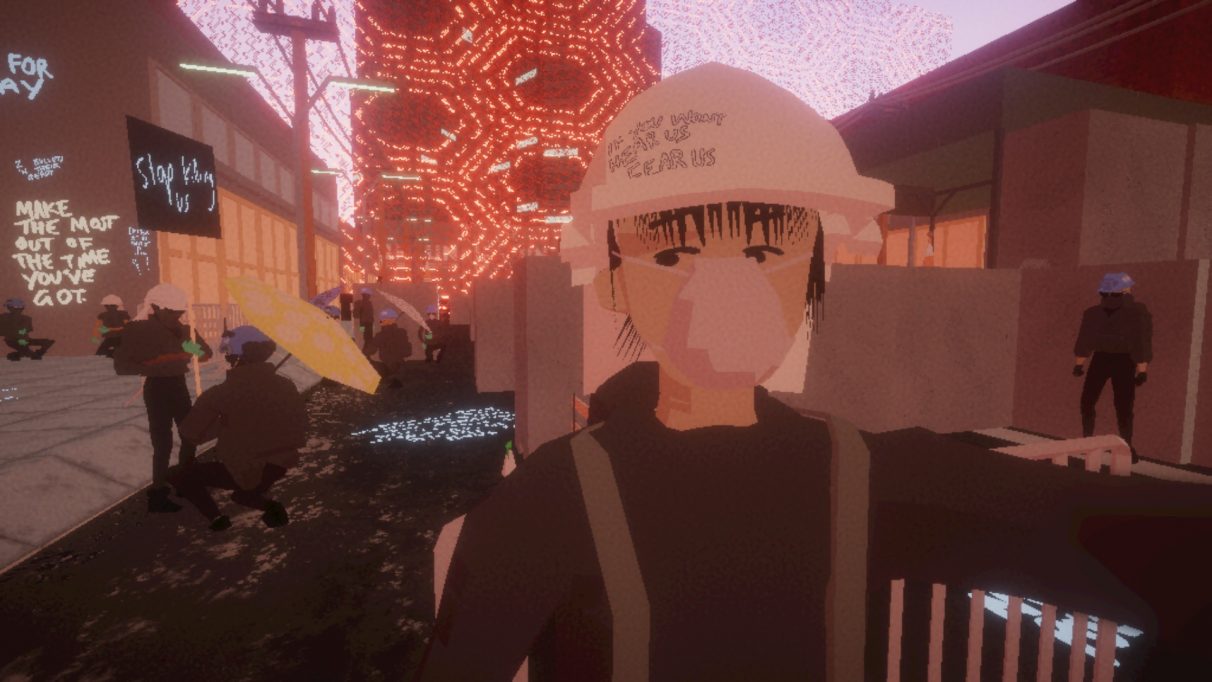 Macro is very consciously aware of the times we live in – a game that is “of 2020” in a way I wasn’t prepared for. Spoilers, obvs, but the final stage pivots hard into the kinds of protest scenes that have struck places like Hong Kong and the United States over the past few years. Tear gas cans litter the street, protestors march with flags and protective umbrellas, and the game will even penalise you for taking close-up shots of their faces. Every wall is plastered with terribly familiar slogans, brazenly anti-capitalism and anti-cop.

The circumstances might be heightened (we’re not protesting collateral casualties from mecha fights in the real world, yet), but the desperation is all too familiar. It’s honestly refreshing, particularly after dipping my toe into Watch Dogs Legion‘s weirdly hollow approach to revolution – one that managed to platform columnists who have actively argued against my own rights. 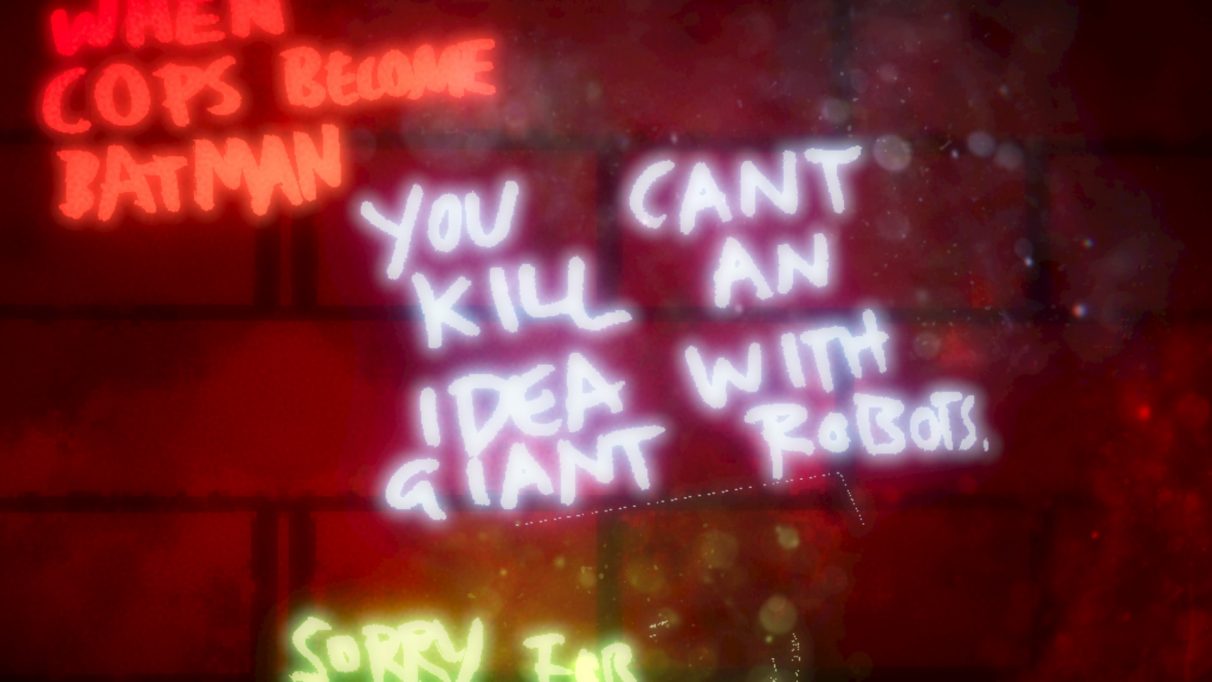 This is, perhaps, the best line I’ve read in a game all year.

Macro doesn’t fix Umurangi’s smaller frustrations. Like, sure, the platforming is still pretty jank, and grabbing photo bounties can still be a bit of a pain. But put those aside, and you’ve got a brilliant expansion to what I reckon may quietly be the best – and boldest – game I’ve played this year. At the very least, it’s worth it just to hear a new set of bangers from composer ThorHighHeels.