I wouldn’t blame you if Plague Inc: Evolved cuts a little too close to home right now. Fortunately, Ndemic are reversing their infectious simulation with The Cure, an upcoming expansion that tasks you not with spreading your monstrous diseases, but with using medical, social and political tools to help stem the spread of a virus until a cure can be found. Coming soon to Steam, the devs have also announced that the update will be free to download until the Covid-19 outbreak is under control.

Back in January, Ndemic found an unexpected upside to the growing pandemic. As it happened, the outbreak was causing sales of the viral simulation to skyrocket on Steam, to the point that developers had to warn players against using the game as a “scientific model”. While it’s not clear if this was the cause, Plague Inc would even find itself removed from sale in China in March.

The Cure is still a game, of course. But rather than simulating an evolving, malicious disease, Ndemic hope the new DLC provides more insight into how we fight pandemics – working with (and donating large sums of money to) organisations like the Coalition for Epidemic Preparedness, World Health Organisation and Global Outbreak Alert and Response Network to paint an accurate simulation of a world besieged by a viral outbreak.

The new mode tasks you not just with developing a vaccine to its fictional virus, but with tracking down and containing the outbreak using familiar tools like contact tracing, lockdowns and border closure. More pointedly, it also simulates economic concerns – after all, folks won’t comply with your preventative measures if you’re not supporting them with furloughs or other tools to keep them housed and healthy. Of course, it’ll pay to see if there’s an option to callously cram folks back into restaurants and workplaces with poorly thought-out schemes. Can’t imagine that’s optimal play. 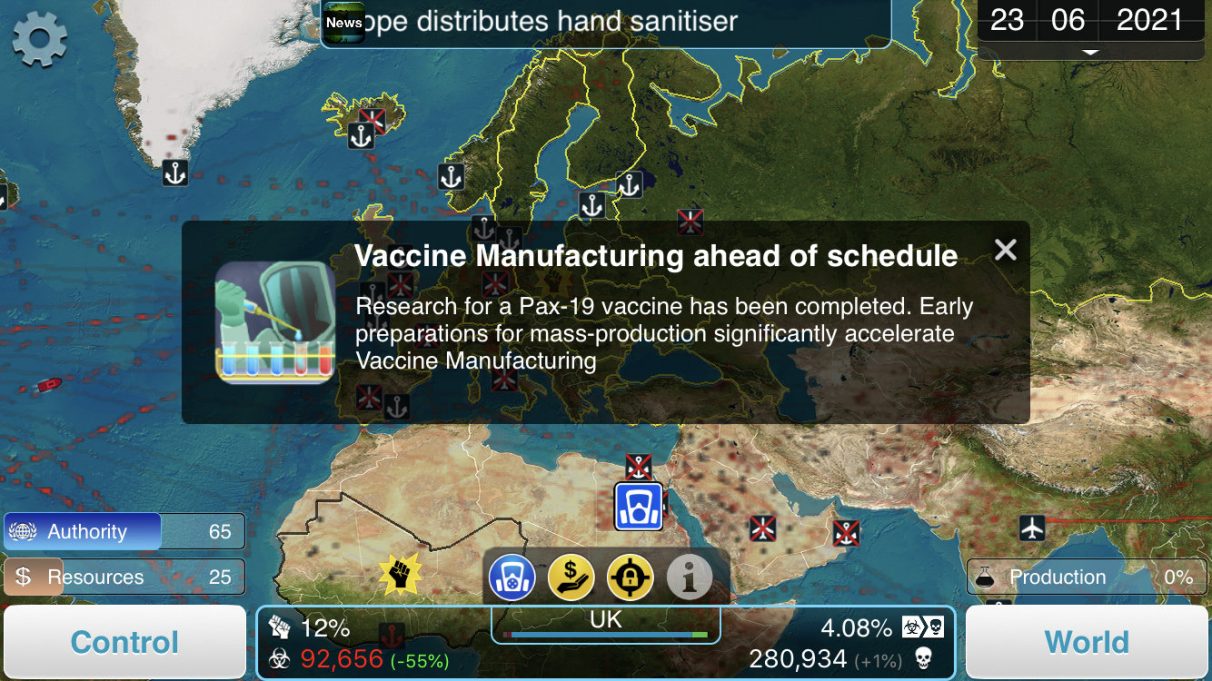 The Cure launched on iOS and Android earlier this week, though it’ll be coming to Steam sometime soon. Ndemic reckon they’ll have a release date to share in the coming weeks. When it does, however, it’ll remain free to download for as long as the current outbreak remains a pressing threat.

“Eight years ago, I never imagined the real world would come to resemble a game of Plague Inc. or that my game would be in a position to help educate and inform people,” Ndemic founder James Vaughan wrote in an announcement post. “Plague Inc: The Cure will be free for all Plague Inc. players until Covid-19 is under control.”

Can’t say I’ve ever wanted a giveaway to be shorter, but there you go. You can pick up Plague Inc: Evolved ahead of The Cure’s release over on Steam for £12/€15/$15.