Call Of Duty: Cold War gives players the option of choosing between a diverse arsenal of powerful weapons, each with stats that dictate the strengths and weaknesses of each firearm. Our Call Of Duty: Cold War weapon stats guide will walk you through the essential stats of every Cold War gun, so you can easily compare weapons and figure out which to equip for your next match.

Below we’ve exposed the essential stats of every single weapon in Cold War, from damage to handling speeds and much more.

How to view weapon stats in Cold War

To view the detailed stats of any weapon in Cold War, hover over a non-optic attachment for any weapon, and then either click the “Details” button above the information panel, or press “2” on your keyboard to bring up the advanced stats for that weapon, and the changes made by the attachment in question.

See the example below, with the “Details” button highlighted in red: 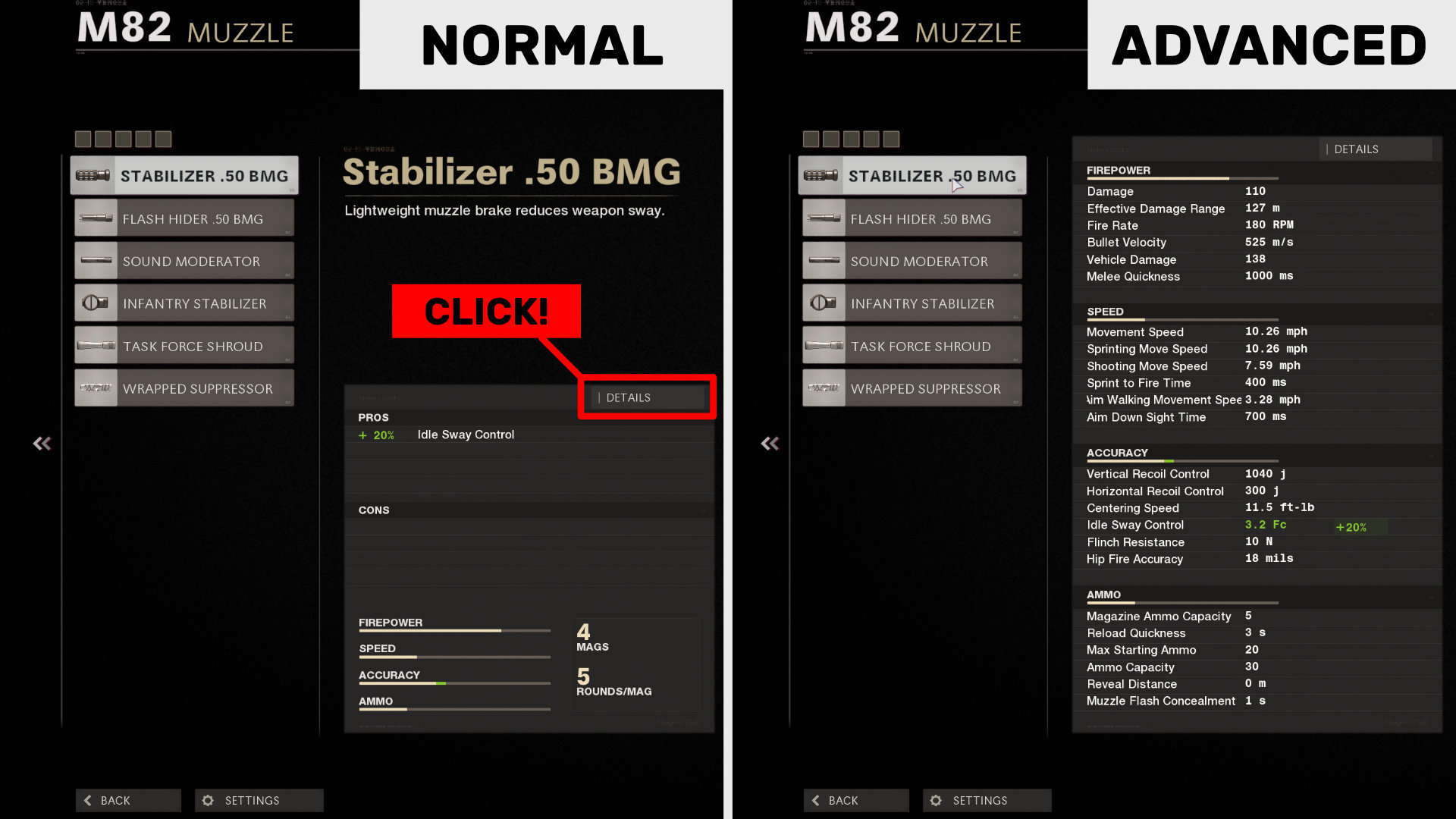 On the left is the regular view, and on the right is the advanced weapon stats view. To toggle between them, click the button highlighted in red.

Now let’s take a look at the essential stats of each Cold War weapon, so you can easily compare different guns in the same class.

Assault Rifles are the dominant force in any mid-range engagement. Good handling stats and reliable damage makes them a staple in most class setups for Cold War, but don’t expect them to reliably challenge an SMG in close quarters, or a sniper over long distances.

SMGs were dominant in the Cold War Betas, and it doesn’t look like that will change anytime soon. These fast-firing close-quarters shredders are perfect opposite a longer-range weapon such as an Assault Rifle or Sniper.

LMGs aim slow but deal devastating damage to enemies at medium-to-long ranges. They’re not great for running-and-gunning, but for fortifying positions and suppressing enemies, there’s not much better.

Tactical Rifles occupy the space between Assault Rifles and Snipers in Cold War. More sluggish than Assault Rifles but packing far more of a punch, these semi-automatic rifles can annihilate enemies at longer ranges.

Sniper Rifles are the absolute kings of Call Of Duty: Cold War at the moment. Not only are they capable of killing an enemy in a single shot to the head (or sometimes even the chest), they’re surprisingly viable at short range too as long as you’re a seasoned quick-scoper.

Shotguns are classed as secondary weapons alongside Pistols in Cold War, and therefore lack the bite of the Shotguns in Modern Warfare. But there’s still nothing better for quick bucketloads of damage at extremely close quarters.

Pistols are reliable sidearms for Cold War players who lack the Law Breaker Wildcard perk. Ranging from fast-firing machine pistols to punchy hand cannons, their speed and handling make up for any deficits when it comes to dealing reliable damage.

And there you have it! All the weapon stats for Call Of Duty: Cold War laid bare for you to peruse. Keep checking back here for all the latest stats. In the meantime, why not check out our guide to the best Cold War Assault Rifles?