While on your quest to take control of England in Assassin’s Creed Valhalla you’ll meet a warrior named Soma in Grantebridge, starting the Stench of Treachery mission. Helping her win back the town is the main goal here, but there’s also the matter of a traitor to be dealt with. The traitor is known to be either Birna, Lif or Galinn, and it’s up to you to single out the right one. This is actually pretty difficult, and relies on you finding all of the available evidence. But let’s cut to the chase, it’s Galinn.

How to complete The Stench of Treachery:

Assassin’s Creed Valhalla: who is the traitor in Grantebridge?

Let’s cut to the chase here, we’ll be naming the traitor right off the bat and then explaining how we know this. The traitor is Galinn, so select him when asked to choose by Soma. There is a lot of information that you will need in order to come to this conclusion, which we’ll detail below.

1. Getting intel from villagers

The first thing you should do upon exiting Soma’s longhouse to start the Stench of Treachery quest is scour the surrounding area for intel. You will see certain characters with speech bubbles above their heads. These will give you vital information, which you will want to make a note of. Here are the three main pieces of info you’ll get:

Now that you have something to go on, continue onto Meldeburne. You can attack this area to free your caged allies. There’s a chapel in this area containing a note. It reads as follows:

“Do not fire upon the longship painted yellow. That vessel carries the herald of our great victory”

The traitor painted their ship yellow. Finding this ship would be a great way to gather evidence, so keep that in mind for later.

3. Speak to the suspects

As part of your investigation you can speak to the three suspects. Each has their own mission, before which you can ask a few questions. Here’s what you can find out:

4. Following the trail of yellow paint 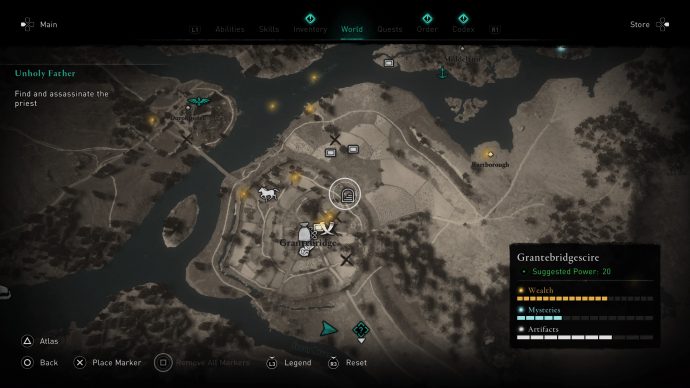 With more evidence to go on, it’s clear that the yellow paint is the key line to follow. Head to Soma’s longhouse, and drop down into the passage shown on the map above. Use Odin’s vision to locate yellow paint. A brief reconstruction will play out. You can follow this yellow paint all the way down to the river, where you’ll find a paint pot and evidence of a ship being hastily painted and launched. Time to track down that yellow ship.

The last thing you have left to do is find the yellow longship, as it will help you work out who the traitor is. From the yellow paint you found, sail out towards the Fens. This is northwest from your starting point. If you sail out and to the left, you’ll start to find crashed ships. You can find Lif and Birna’s ships early on, examining the poems inscribed on them to help identify them. If you head to the location shown on the map below you will find your yellow ship. It’s surrounded by bandits so deal with them and then examine the boat. You’ll learn that this is Galinn’s ship, and that he fled the attack only to be ambushed by wolves, which is where you met him earlier in the game. This is pretty damning evidence. 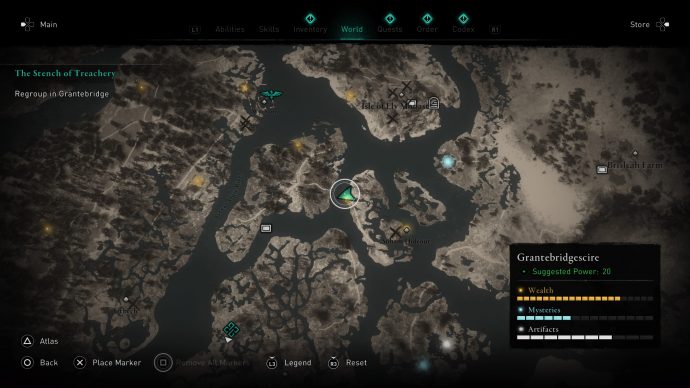 Without the yellow paint evidence, you might have chosen Lif as the traitor, given he is the only one with any real motive. After some sleuthing it’s clear that Galinn is the traitor however, so head to Soma to report in. You’ll be asked to present evidence and then select a traitor. Soma will kill them there and then, before heading to Grantebridge to take back the town.

7. Rewards for picking the right traitor

Once the dust has settled after the big fight at Grantebridge, Soma will thank you for your help. If you chose the correct traitor you’ll also be given a new conversation with Birna, who will ask to join your crew. They’ll be available for raids, or for just cruising down rivers whilst humming a song. You’ll also get a new shield from Soma for your troubles.

That’s who the traitor is in Assassin’s Creed Valhalla. For more on the game be sure to have a read of our AC Valhalla walkthrough or our look at whether or not you should kill or spare Leofrith.