Hello and welcome to the corner of the RPS Treehouse where we sit and chant, “Mass Effect! Mass Effect! Mass Effect!” to will news about BioWare’s sci-fi series into being. This week, our dark magic has summoned three (3!) new images of some lovely artwork for the next Mass Effect game, which the developers revealed they were working on during their N7 Day celebrations.

Oooh but what can we decipher this time? Well, I already said it about the first teaser image, but I reckon these new ones even further suggest that Mass Effect 5 will be a sequel to Andromeda.

Posted to Tumblr yesterday (thanks, Eurogamer), these three pieces of artwork are from a new coffee table book, BioWare: Stories And Secrets From 25 Years Of Game Development (published today in the US for $46). The post says they came alongside the first “mud-skipper” image (above), and a subheading that reads: “A look at the next Mass Effect.” 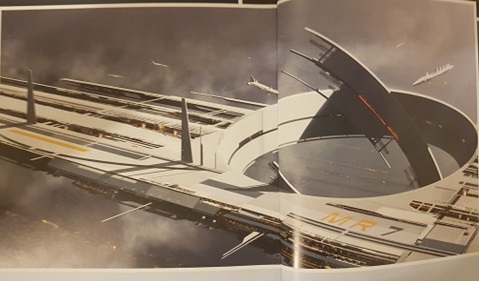 This pic looks a whole lot like a Mass Relay under construction. Mass Relays are the big space structures that allow ships to fly from system to system without taking centuries to do so. There are loads of them in the Milky Way in the Mass Effect trilogy, and the prospect that they could be building them in Andromeda is pretty exciting. The MR 7 logo implies that there could be more than one of them, too.

If there was some way to build a Mass Relay that would let them slingshot back to the Milky Way from Andromeda, it could even mean a visit to Shepard’s old turf 600 years after we last saw it. 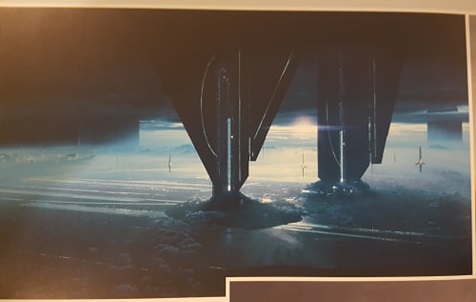 Alright, no one can deny these look like Remnant structures.

This next image looks so incredibly similar to the Remnant structures found all across the Andromeda galaxy, so that’s it, I’m convinced. Remnant are an ancient race of AI beings you discover, well, remnants of throughout ME:A. They have massive terraforming architecture that looks almost exactly like this, though (spoilers) the end of the game sees it all get disabled.

I almost think it looks like some sort of city that’s been built around the huge vaults – maybe even a lasting pocket of Remnant civilisation. 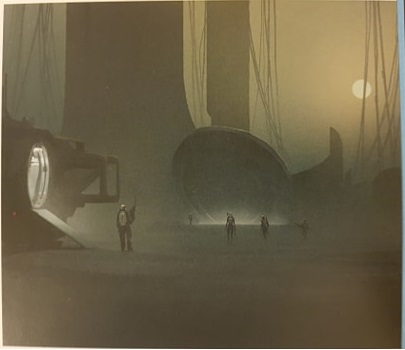 What alien species can we make out in this one?

The last piece of artwork shows a bunch of silhouettes on a murky planet. It’s such a small image it’s difficult to make out what species we could be looking at. It seems like we’re looking at a lot of humans, though that one in the middle has very skinny legs – a quarian or angara, perhaps?

A notable thing about this one is that same spaceship, the mud skipper from the first teaser pic, is there on the left. Other than that, I don’t have much (for once). I will say it looks swampy. I’m not a fan of video game swamps, though, so I kinda hope it’s not.

Ah but I do love when there’s some BioWare goodness to speculate on. It’ll likely be a while before we actually get any concrete info on whatever this new game will be, but it’s fun to think of all the things Mass Effect 5 could bring.

On N7 Day, BioWare also officially revealed the Mass Effect trilogy remaster. Oh so many things to look foward to.