There’s a traitor afoot in the Essexe arc of Assassin’s Creed Valhalla, and it’s up to you to work out who it is. Rollo will take you to his camp where two suspects are waiting. The traitor is either Gerhild or Lork, and there’s very little evidence to go on. To make sure you pick the right person we’ve named the traitor below. We’ll explain how we worked it out, and what happens if you pick the wrong traitor as part of the Old Wounds quest.

AC Valhalla: who is Rollo’s traitor in the Essexe Old Wounds quest

The traitor who betrayed Rollo in the Essexe Old Wounds quest is Gerhild. You are given two options, Pork or Gerhild, and it’s clear from the available evidence that she is the one lying about her alibi. We’ll explain why later on in this guide.

Talking to the suspects

The first thing to do to find the traitor is to speak to the suspects. Both claim that they were out hunting rabbits for Rollo’s return, and Lork says he saw Gerhild speaking with a Saxon. With this new info you can examine the nearby game rack. It’s full, meaning the two would have no need to go hunting. 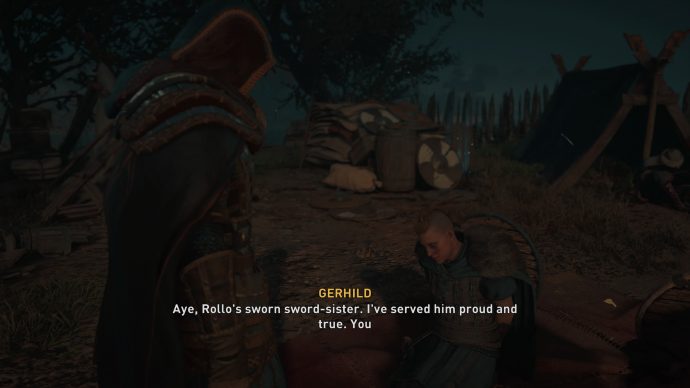 There’s another piece of evidence to check before making your decision, the hiding spot to the left of Gerhild. Use your Odin’s Sight ability to find it. Now, speak to the two suspects again. Pork will reveal that he wasn’t hunting, he was sleeping in the woods and then hid when the attack happened. Gerhild says she was meeting a lover, the Saxon that Lork spotted. With all of this evidence it’s time to make a decision.

Given that we know that Gerhild hates Rollo for seeing Estrid, her having a Saxon lover seems unlikely. She also lies about hunting, and has no alibi for why she was left alive during the attack. Lork has a blood oath to Rollo, which Danes take pretty seriously. It is also mentioned that he is getting old and frail, which would explain the sleeping and hiding. It’s time to speak to Rollo and accuse Gerhild. She will be killed.

What happens if you make the wrong choice?

If you pick the wrong traitor, Gerhild will harm Estrid later on in the story. The traitor will still be alive, so you’ll basically have a harder time getting Estrid out of England.

So there you have it, Gerhild is Rollo’s traitor in the Old Wounds quest. For more on AC: Valhalla be sure to visit our walkthrough. There’s also our look at collecting all of the Ymir’s Blood Stones in Jotunheim.

Assassin's Creed Valhalla Ymir's Blood Stones: what is the reward for getting 33

Here's what you'll get for collecting all 33 Ymir's Blood Stones.