During the Asgard arc of Assassin’s Creed Valhalla you’ll make your way to Jotunheim. It’s a small open world area with its own side quests, and collectibles called Ymir’s Blood Stones. There are 33 to collect, and once you have them all you can trade them in for a reward. This will take a while, so to help you weigh up whether it’s all worth it we’ve detailed what you’ll get in this guide. We’ll also take a look at solving illusions, and highlight the Ymir’s Blood Stones locations that may take you a little while to reach.

Just like in Asgard, almost all of the Ymir’s Blood Stones in Assassin’s Creed Valhalla can be found by simply heading to every point of interest on the map. There are some exceptions to this, where some only become available after you beat the main story. Because of this, I recommend you play through the story, collecting any Blood Stones you come across, before heading back for the rest once you’re done. The main one you’re likely to struggle with is near the great serpent tree. You’ll need to have completed the Enchanted Tower first, then all will be revealed. Many of the Stones are hidden behind illusions, which we’ll explain below. 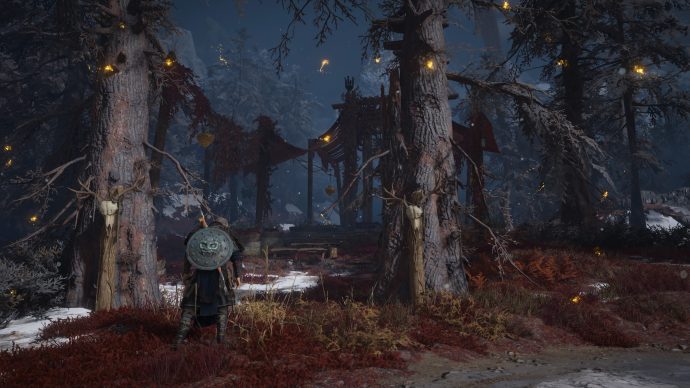 How to solve illusions

Collecting 33 Ymir’s Blood Stones is extremely easy once you know how to solve illusions. These spots can be found around the world, indicated by floating golden lights. When you see these make sure you stop and look around. You’re looking around for animal skulls. They will be mounted nearby and to solve an illusion you just need to look through the gap between two animal skulls. This will spawn a new object ahead of you, which will help you get to whatever treasure you’re looking for.

What is the reward for collecting all 33 Ymir’s Blood Stones?

For collecting all 33 Ymir’s Blood Stones in AC: Valhalla you’ll get five skill points. You’ll also fill in the Mysteries bar on your HUD so if you’re going for 100% completion, you’ll need to do this.

How to complete the blue lightning side quest

There’s a side quest in the Jotunheim area that starts by showing you a pillar with blue lightning crackling above it. You’ll need to have completed the main story in this area before you can start this quest. Return once you’ve done so and speak to the character you find there.

That’s what you’ll get for collecting all of the Ymir’s Blood Stones in AC: Valhalla. For more on the game be sure to check our Romance guide. Once you’re done there, head over to our look at finding all of the fish.