No matter how intelligent a game’s AI is, how immersive the story turns out to be, or how believable the characters are, it can never actually simulate the thing that makes Dungeons & Dragons a great game: human shenanigans.

I’ve adored my time with Baldur’s Gate III. Larian Studios were the perfect choice for a full-blown adaptation of what is easily the most mainstream and recognisable form of tabletop roleplaying. But it’s made me reflect on what TRPGs mean to me as a player. What I’m saying is that with real life D&D, Dungeon Masters face many cumbersome challenges every session, and BG3 has made me even more aware of the horrors they endure.

If you’ve played D&D, you’ll know that up to 75% of the game can be spent taking the piss out of the Dungeon Master, or DM. It’s not malicious; if anything it’s a great way to ease the tension of assigning one person the responsibility of ensuring everyone has a good time. It’s a lot of pressure for a role that most players don’t really consider much. Instead, they just enjoy a game handcrafted for their characters, or a tense fight that was painstakingly staged for hours in advance.

It’s easy to forget how much preparation goes into a good tabletop role-playing session – especially when it’s so simple for players to point out small inconsistencies and mistakes the DM forgot to delete from the script.

I started thinking about the effects of a good Dungeon Master after dying in the same combat encounter roughly four times. It was an early game battle, against a gaggle of brains with legs called Intellect Devourers, and for whatever reason, I could not defeat them. It’s a difficult problem to have with a combat system that relies on a literal (or virtual if you want to be that person) roll of the dice because as humans, we want a reason why we failed; some grand explanation for why the dice posses the stubbornness of a cat lying on a keyboard. In a video game setting, we can’t really blame anyone but ourselves so we become frustrated and annoyed at the experience. 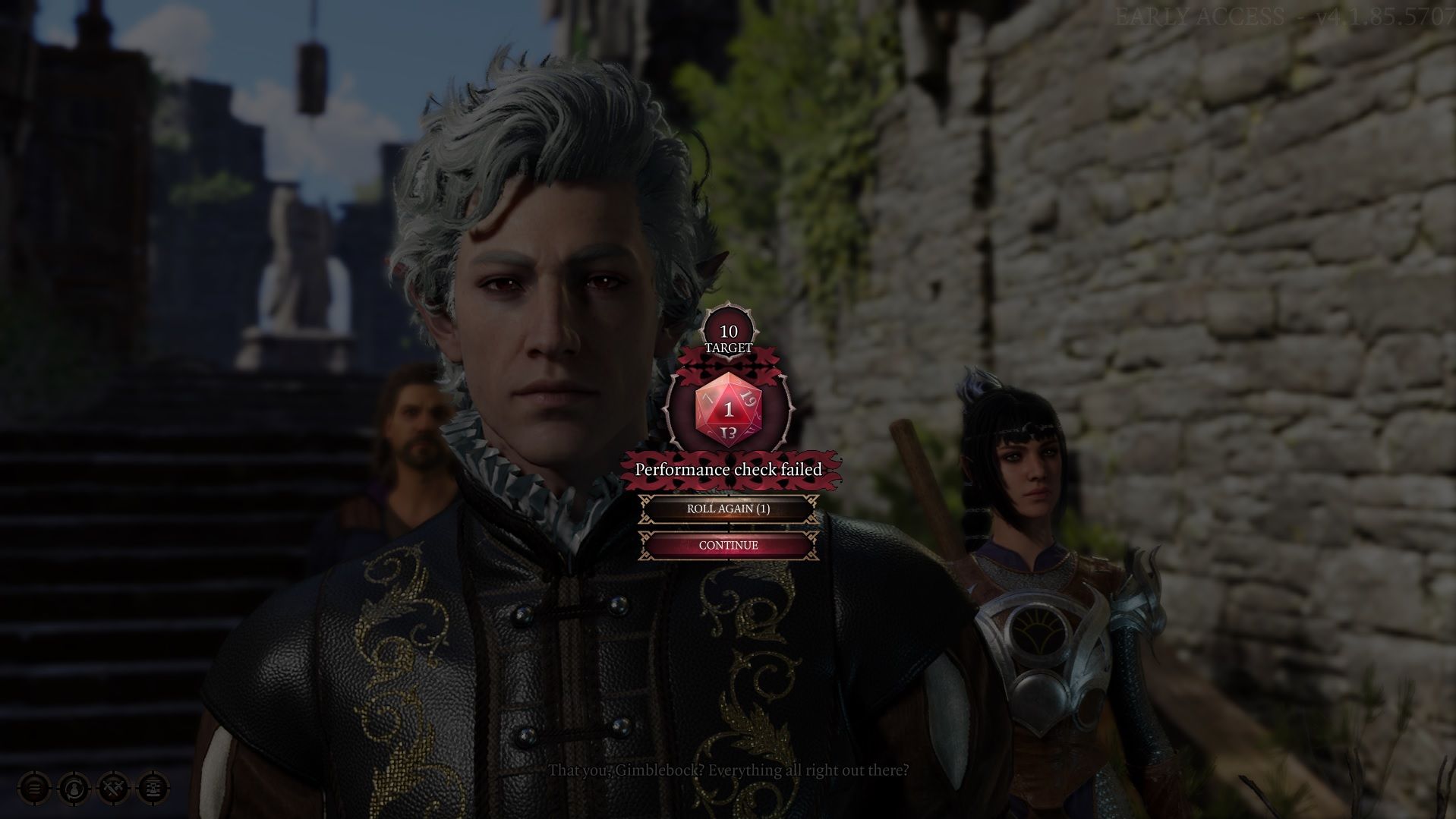 Key dice rolls in Baldur’s Gate III are shown on screen, which does add drama.

I could feel that frustration slowly condense into disappointment. Baldur’s Gate 3 is just 5th Edition D&D! How could I not get this? I’ve played this four days a week for years now! But Baldur’s Gate III isn’t actually Dungeons & Dragons, and it never will be.

See, the thing that makes Dungeons & Dragons, or any tabletop roleplaying game so great, is that it’s intimate. Personal. More so than anything else, most of it is improvised by someone whose job it is to entertain as their social standing depended on it. Which, you know, depending on your group, it might.

If Baldur’s Gate III was an authentic D&D experience, there would be a DM that could have fudged the damage rolls of those Intellect Devourers. They could have let me hit just enough to win and dodge just enough that I almost didn’t win. The fight could have been tweaked on the fly, just some dynamic shifting to retain the tension of combat, without punishing me to the extent that I didn’t feel like playing any more.

“As a medium, video games juxtapose the unpredictable nature of TRPGs, which are based on the premise that anything can and should happen.”

That sense of a free flowing train of thought created and steered by one person, but that everyone can contribute to, just doesn’t exist in Baldur’s Gate III. It’s the sort of thing that can only be handled by a human intelligence able to judge a situation and improvise subtle bending and breaking of rules to keep the game feeling balanced and moving forward, rather than stalling at a tricky bit.

Video games are clear cut and mechanical. There’s causation and then usually an expected result. The whole point is that you can control what happens and if you can’t, the challenge becomes learning to control it. As a medium, they juxtapose the unpredictable nature of TRPGs, which are based on the premise that anything can and should happen. A DM never really controls a game, or the players, but guides them like a kind parent letting their children learn from their own mistakes. They’re trying to kill your characters, but don’t actually want them to die.

I get that I’m essentially faulting Baldur’s Gate III for failing the Turing Test, which may seem unfair, but that’s also a bit reductive. What I’m saying is that BG3’s adaptation of tabletop rules has made me appreciate how they’re special. Especially, it has made me appreciate the person who poured their personal time and energy into a chore that really amounts to “How can I give these nerds a really fun three hours?” 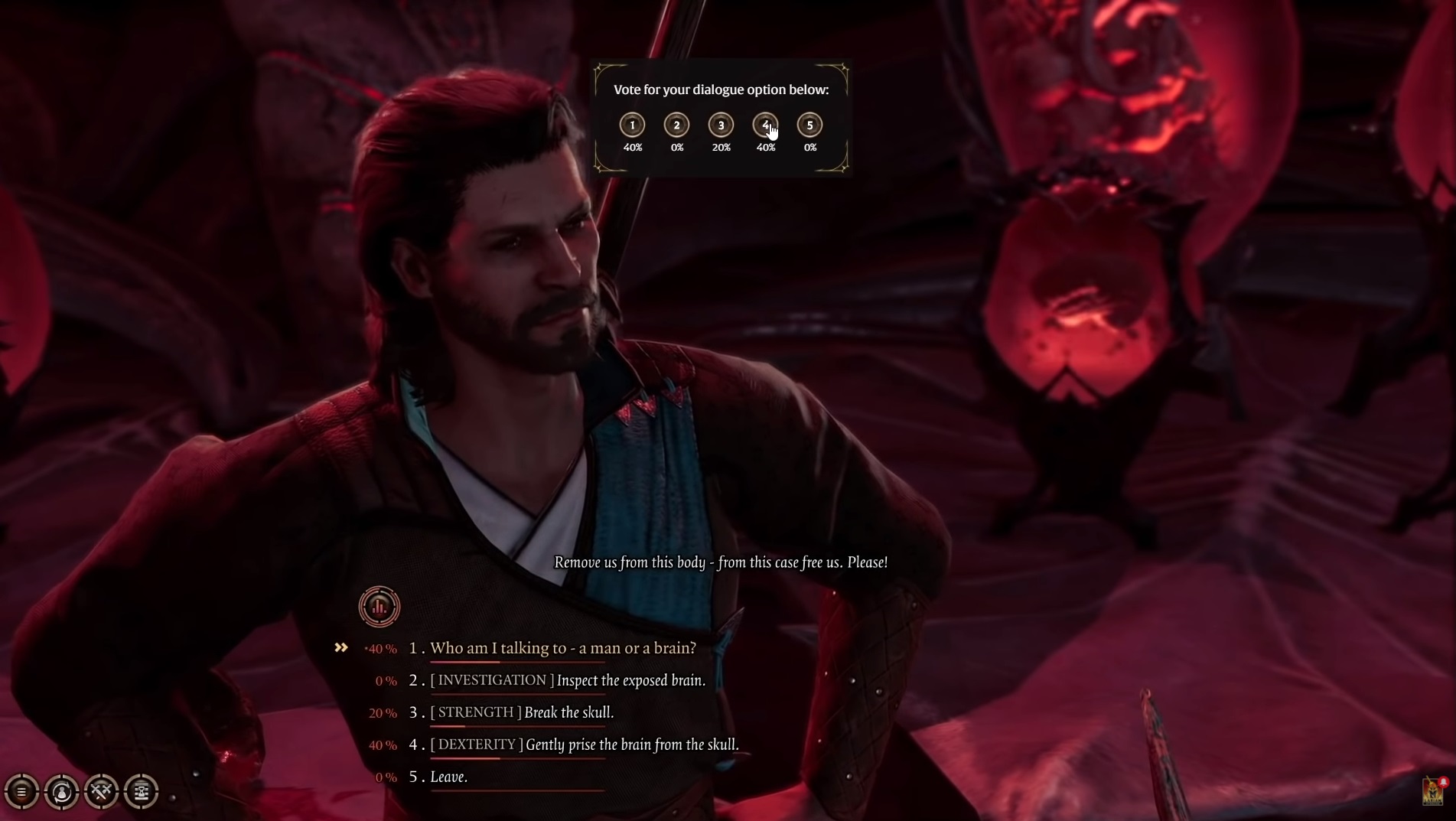 In the multiplayer for Baldur’s Gate III, players vote on actions and dialogue choices. This feels a bit too democratic when compared with the party dynamic of your average TRPG

Dungeons & Dragons is a collective experience that can’t be separated from the people you enjoy playing with. There is a co-op mode in Baldur’s Gate III that arguably gets closer to that experience, but in its current form it doesn’t allow for one player to act as a DM and set up custom scenarios – and in any case, using a computer will always present limitations. A Dungeon Master, if they’re good, will offer players situations with endless solutions and opportunities, because at the end of the day no one knows what the result is going to be. Taking that butterfly effect style of play and having to limit it by “Success” or “Fail” will never capture the same magic.

Dungeon Masters: you don’t get enough credit for preparing, encouraging, and creating a magical freeform story and allowing players to trample all over it for the sake of a Saturday night. If you’re involved in a Dungeons & Dragons campaign, maybe just thank your DM for all the effort they put into weaving a narrative designed for you and no-one else.

Baldur’s Gate III doesn’t fail at adapting D&D’s 5th Edition rules. What it does fail to capture, and what video games in general aren’t yet able to, is that sense of making it all up. Of trusting the DM to be straight with you on a devastating roll and lie to you when the outcome would be less than fun. Or suggesting something completely outlandish and absurd and having your DM smile and evoke “The Rule of Cool” to see it come to pass. That kind of interaction… you don’t get that when a computer runs the game.

At least, not yet.