Now streaming live:
Immortals Fenyx Rising review
A fun, family-friendly, imaginative action game that can get a bit grindy, but is still here to save your Christmas.

Immortals Fenyx Rising is the sort of name that you assume has a colon in it, even though it doesn’t. Apparently Ubi’s family-friendly mythical action-adventure had to change its name from Gods & Monsters after a challenge from Monster Energy, which is fair enough. After all, how many times have you tried to pour a refreshing energy drink into your mouth, only to discover you have inadvertently smashed part of the Ancient Greek pantheon of gods into your face instead?

Immortals still has much more in common with a slightly more budget Breath Of The Wild, or an Assassin’s Creed Odyssey made from Duplo, than it does the nation’s most Lynx Africa adjacent can. And since I like both of those games, and Immortals incorporates some of their best bits, I very much like Immortals. It could be the surprise sleeper hit of the year, in fact, and I’m hoping it is.

The titular Fenyx is a hero of your making (whose appearance you can customise and recustomise whenever you like at your home base magic temple – I made mine into Kassandra from AC Odyssey as soon as I realised it was possible). Called into action when Typhon, a giant angry monster titan who spits fire a lot, takes over the island sanctuary of the gods, Fenyx has to restore said deities to their former glory by returning their essences. So far, so quest in handy to-do list sections.

Each god had a different area of the island they called home, ensuring that your adventures have varying backdrops: the green, waterfall laden gardens of Aphrodite; the grand temples and libraries of Athena; the scarred battlegrounds of Ares; the smoking workshops and automata of Hephaistos. Everything has the juicy, intense colour palette of a wholesome cartoon, even the baddies you face. 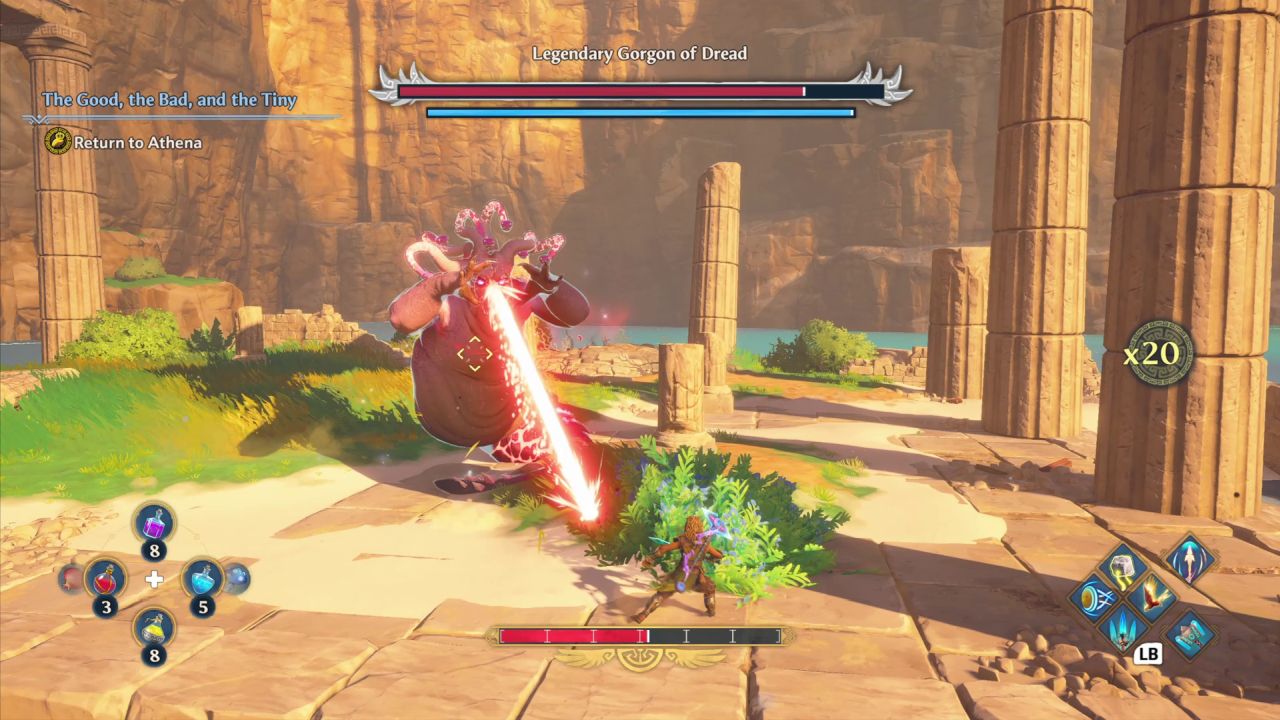 You are accompanied by the twin omniscient narrators Zeus and Prometheus, an appealing double act that I enjoyed. Prometheus is more serious and world weary as he tells Fenyx’s story, while Zeus is more of a petulant, impatient child who goes on an emotional journey. If Immortals as a whole is a family-friendly romp, Prometheus and Zeus are there to provide the jokes for mum and dad – like one quest early on, where you recreate a version of Aphrodite’s birth and Prometheus explains, in a whisper, what it was that actually fell into the sea and caused foam to appear… There’s a running joke about Zeus totally not having a thing for Achilles, that I think keeps cropping up for the majority of the game. It’s cheeky at times, but never blue, and never outstays its welcome. It’s just a nice accompaniment to saving the world.

Immortals Fenyx Rising is cheeky at times, but never blue.

Saving the world in this case requires a healthy mix of combat, exploration and puzzle solving. The first of this list is bouncy, bloodless, and fun. Fenyx has a sword, which is nippy and restores stamina, a bow for ranged attacks, and a big axe that swings slow but gradually stuns your enemies until they fall over with comedy stars orbiting their heads.

The baddies themselves range from little soldiers, bigger soldiers (one variant of which can summon a group of small soldiers to protect him, and the first time I saw it happen I said “OH WHAT THE FUCK?” out loud), and mythical beasts ranging from the sad cyclops to the disturbing four-armed creepypasta monster. You’ll start seeing similar attacks – the minotaur and the chimera will both charge at you, that sort of thing – but when you’re thrown into a mixed group, and you add in your unlockable abilities like deflections, aerial combos and special attacks, you can’t sleepwalk through encounters. 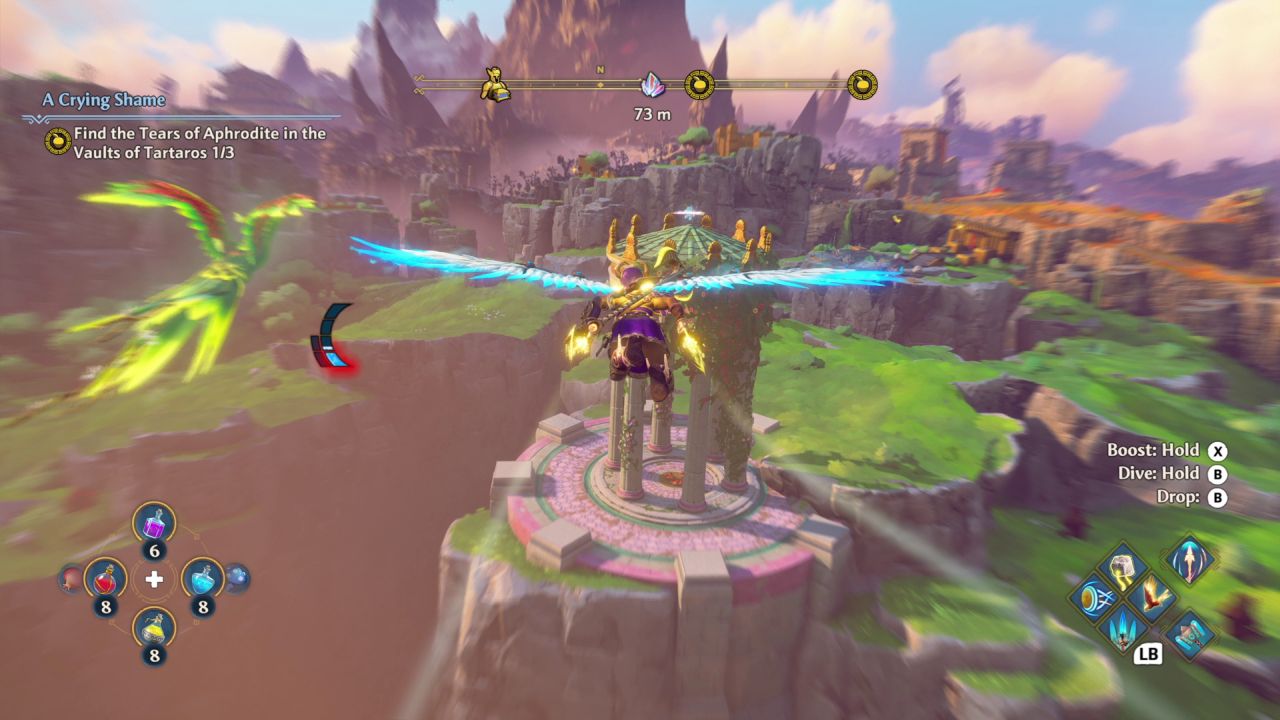 Here I am flying above the landscape, accompanied by my noble phoenix pal Phospho, whomst I have forced into a skin that makes him look like a parakeet.

To make combat easier, or at least less hard, you can unlock these abilities, increase your stamina and health, discover loads of cool gear with different bonuses and improve your armour and weapons at a home base where trickster god Hermes is kicking around being vaguely quippy. Most of this is technically optional, but it’s not really, as it’s kind of the cornerstone of the traversing and puzzling bits of the game.

You get all the different bits of in-game currency from exploring and solving puzzles. The puzzles are my favourite bit. The more involved, multi-stage Constellation puzzles send you scampering about to collect giant marbles to set on a board in a certain order. Odysseus challenges make you shoot one of yer magic flying arrows through hoops on the ends of axe handles, the axes themselves arranged as an assault course amongst, for example, the snaky loops of a stone hydra. Some challenges are little races through the landscape: fly up these waterfalls without touching the ground, that kind of thing.

Often even opening a chest is preceded by a hunt through the nearby architecture to figure out what you need to do to unlock it. The whole map is scattered with vaults, like Zelda’s puzzle dungeons, that give you a piece of Zeus’s lightning, a way to upgrade your stamina, and these call upon a mix of combat, traversal and puzzling too. There are lasers, pressure plates, cubes of different weights and sizes made of stone or bronze or wood. You can “cheat” puzzles by ignoring what you’re supposed to do and using your big hammer ability to send a heavy cube flying where you need it to go. 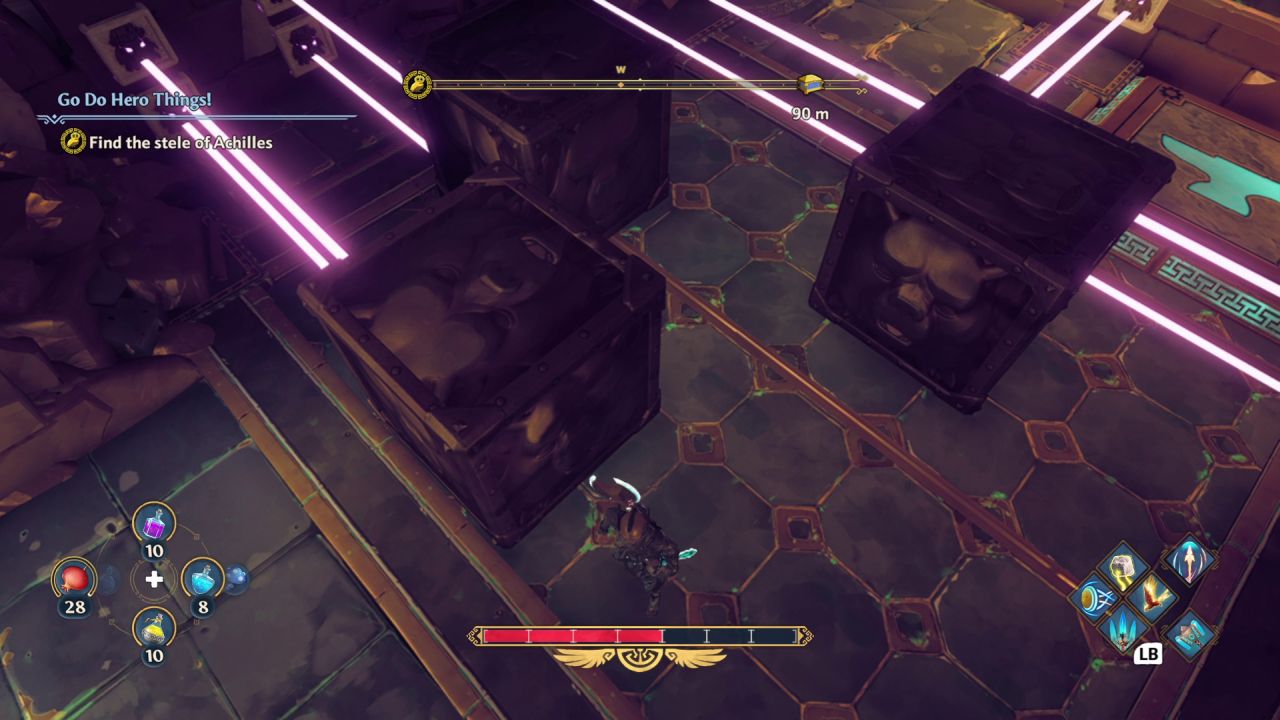 Fuck these sorts of puzzles in particular

The puzzles are varied, and I know they must be made well because I despise some of them – but not random ones. No, I just really fucking hate any of the ones that involve lasers, because I can’t get my head around the timing of them, or which order to push the blocks in. I frequently resort to forcing Fenyx to walk through the lasers whilst chugging health potions, like they are a World War I battalion facing the machine guns and I am an ambivalent general back at HQ.

The traversal is my least favourite, because although the gliding wings you get make floating around above the landscape fun and epic the first few times you do it, eventually you realise that the world is pretty big and it doesn’t have that many fast travel points. A lot of your traversal becomes plain ol’ travel, and though the game tries to keep you on your toes by Typhon having a tantrum and raining down fire and brimstone every so often, that becomes a frustration that lengthens your journey rather than a diversion. A big puddle in the road you have to go out of your way to avoid, rather than getting a Maccas from the services as a treat. 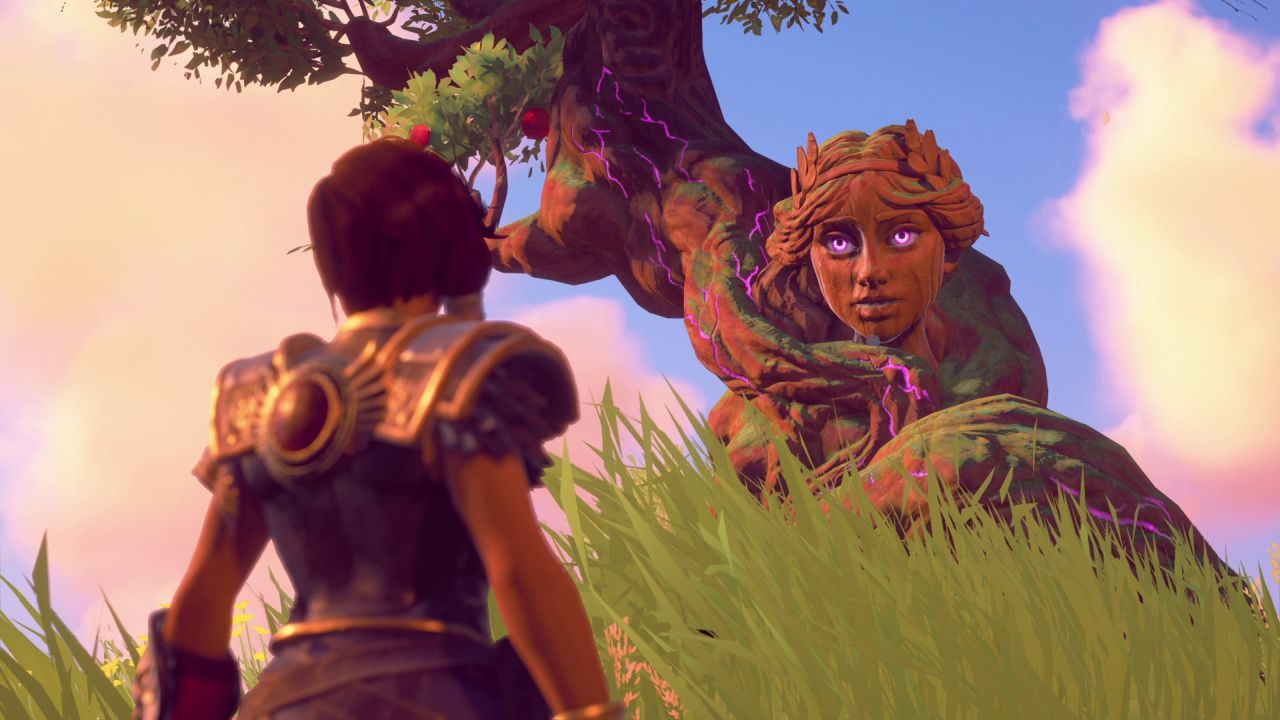 Immortals does start to feel a bit grindy, too, if you crush it up and mainline it too much in an evening. It’s a game to be played at leisure over the Christmas break, not shnarfed down as quickly as possible. And the further you go, the harder and more involved it gets, and the deeper the references to Greek mythology get, to the point that I started to wonder who this was aimed at. It didn’t feel like it was aimed at kids.

But then I thought, fuck it, I’m not a kid, and I really like this. Does every game “for” grown-ups need to have blood and rude swears? No. And by the same token, games for tweens don’t need to be patronising, and it’s not like if I had a 12-year-old kid I’d buy them Cyberpunk 2077 for their new console, because that’s not at all appropriate. Thank goodness there’s this, then: an imaginative, fun action game that has a nice story about family and personal growth at the heart of its epic adventure, and a good sense of humour, where you turn Aphrodite from a gracious tree back into a bitchy hot girl.